Before watching each week’s installment of Twin Peaks: The Return, the titles given for each part offer a nice little hint for what’s in store, or, in the cases where the title doesn’t provide an obvious prompt, a way to later look back on the element that David Lynch and Mark Frost wanted you to pay the closest attention to from the beginning. The title of “Part Nine” was “This is the Chair,” and in that episode, we got some seriously important information from that chair: the directions from the late Major Garland Briggs (Don S. Davis) that will get the Twin Peaks Sheriff’s Department closer to understanding where and when and how Special Agent Dale Cooper (Kyle MacLachlan) can be found. This week’s title, however, is “Laura is the One” and while we’re not left with any immediately accessible explanation for what that means, we know that Laura Palmer (Sheryl Lee) is somehow the key element to restoring, and hopefully healing, the toxic sadness now coursing through the metaphorical water supply within the town of Twin Peaks.

If you recall, we learned in “Part Eight” that Carel Struycken’s character, credited so far as just ??????? in The Return, and his cohort in the White Lodge (though I’m personally on the fence that this is what this is) Señorita Dido (Joy Nash) sent the golden goodness of Laura into Twin Peaks to combat the rivaled evilness of Bob (Frank Silva). The essence of Bob was most recently within Dale Cooper’s Doppelgänger, who we’ve been calling Evil Cooper, but was removed by the Woodsmen (led by Robert Broski) and is now god knows where. Even without that essence, the ratio of “bad” versus “good” in Twin Peaks and the other new locations (Las Vegas, South Dakota, New York, Philadelphia) leans more on the bad side. Like really, really bad. Twin Peaks used to be a town where, aside from the occasional incest, prostitution ring, and murder, the worst thing to happen on any given day is finding a fish in your percolator. Now, it’s a place where pinched-face psycho killers call their grandmother a cunt. So, if “Laura is the One,” as we’ve been told by the auteurs themselves, perhaps that means she’s the one to finally snap Cooper out of his Dougie stupor; in other words, Laura contains the Prince Charming-esque kiss that’s gonna bring him back around. Hell, we’d place a Mr. Jackpots-sized bet on it. 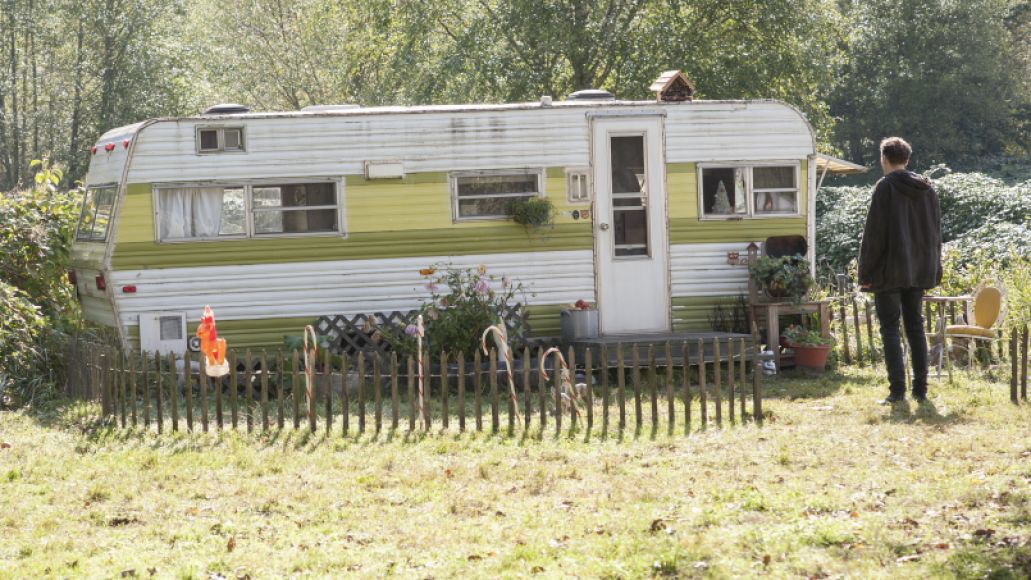 “Part Ten” opens with another appearance from Richard Horne (Eamon Farren), who we now know beyond the shadow of a doubt is the terrible, terrible god-awful son of Audrey Horne (Sherilyn Fenn) who we still have not seen. He pays a visit to the trailer park where Miriam Sullivan (Sarah Jean Long) lives to try and sweet talk her out of not telling the police that she saw him mow a little boy down with his truck. Unfortunately for her, she tells him she already called and wrote a letter to the Sheriff, to which he gives up the sweet talk and just kills her instead. Ramming his way into her home, we hear the sounds of brutal violence and then the camera lets us peek in to see that not only did he beat her to death, he opened up the gas on the stove and left a burning candle next to it as well. Spoiler: Things are going to get even more heated.

In back to back displays of violence, we go from here to the front of the New Fat Trout Trailer Park where Carl (Harry Dean Stanton) sits in a folding chair strumming “Red River Valley” on an acoustic guitar. His song is interrupted by a red coffee cup being thrown through the window of a nearby trailer and we go inside that home to see Shelly’s daughter Becky (Amanda Seyfried) being manhandled and screamed at by a hysterical, runny nosed Steven — her husband — played very Leo Johnson-y by Caleb Landry Jones. Based on this display, he may even have Leo beat and it seems like Becky might have something worse than soap in a sock coming her way. Those familiar with the original series and Fire Walk With Me might be wondering whatever happened to ‘ol “new shoes” Leo. It’d be interesting to see his storyline wrapped up in The Return along with a few others we’re curious about like Donna Hayward (Lara Flynn Boyle, Moira Kelly) for instance. Let’s not hold our breath, though. 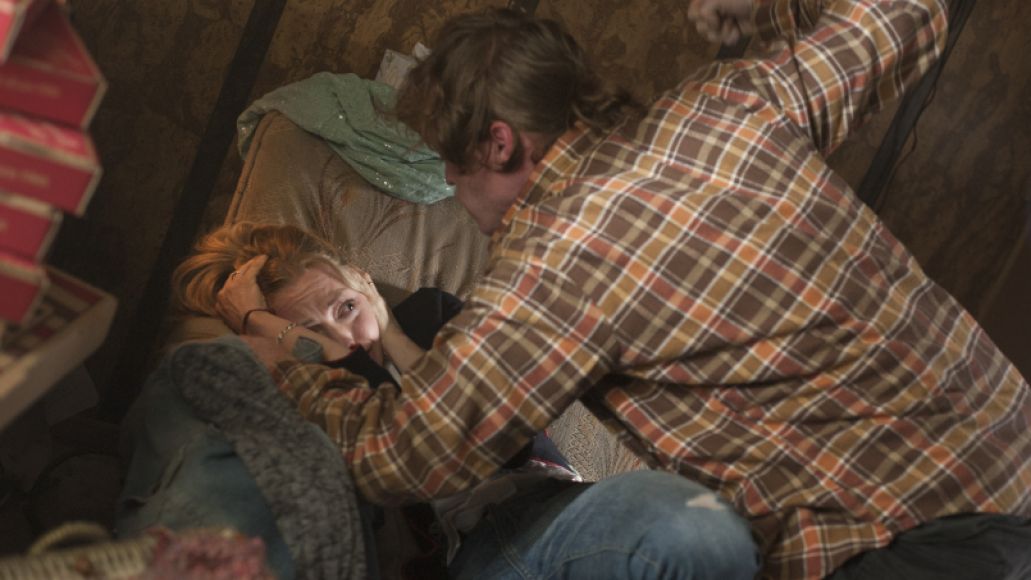 Meanwhile, at a doctor’s office in Las Vegas, Cooper/Dougie is being examined while his temporary (although she doesn’t know this yet) wife Janey-E Jones (Naomi Watts) watches, looking visibly pleased that he’s mysteriously lost a bunch of weight and is now in excellent shape. Once back home, Janey seduces Cooper/Dougie into the bedroom and the two engage in loud sex (poor Sonny-Jim) and then fall asleep in each other’s arms. It will be sad when Janey learns down the line that the man who just gave her what was probably the first orgasm of her marriage isn’t actually her husband. With the “real” (manufactured) Dougie gone, having been sucked back into the Black Lodge and destroyed, she’ll be left with no husband at all and doesn’t deserve that grief. Janey -E Jones 4-EVR.

In another part of Las Vegas, the Mitchum Brothers (Jim Belushi, Robert Knepper) are watching the news and see a report that Ike the Spike (Christophe Zajac-Denek) has been arrested. Part of the report includes hilarious footage of Janey and Dougie/Cooper after having been attacked by Ike in front of the Lucky 7 Insurance building and the brothers put two and two together that the man who thwarted Ike is also who they previously knew as “Mr. Jackpots.” They make plans to call off the hit they had arranged on Ike themselves and to set up a meeting with Dougie/Cooper/Mr. Jackpots soon. To further complicate the life of Dougie/Cooper/Mr. Jackpots, we later also learn that Anthony Sinclair (Tom Sizemore), who works with Dougie/Cooper at Lucky 7 and who we already knew was an asshole, is in cahoots with Duncan Todd (Patrick Fischler). With Mr. C breathing down his neck, Todd orders Sinclair to influence the Mitchum Brothers to kill Dougie/Cooper by telling them he’s the reason their $30 million insurance claim got turned down. And if that fails, Sinclair will have the do the job himself.  Seriously, what if Dougie/Cooper gets killed before Cooper “wakes up?” Don’t rule it out, anything can happen in Lynch land. Anything. Lynch and Frost have already been throwing us curve balls and dragging us around by the nose for 10 weeks now and nothing would be more of a gut punch than killing off the series’ most beloved character. We wouldn’t put it past them. 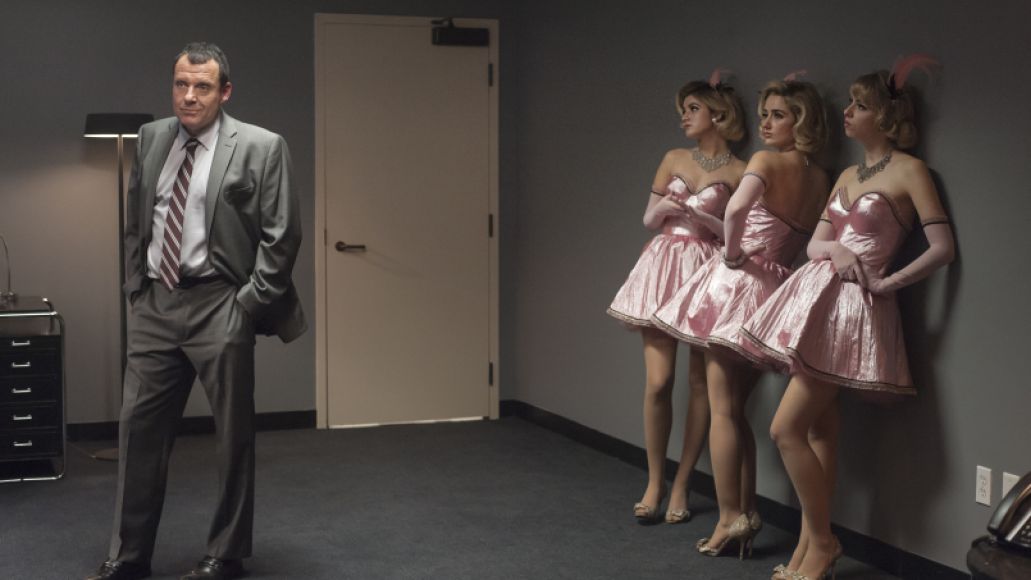 Back in Twin Peaks proper, we’re gifted with a new installment of former doctor Lawrence Jacoby’s (Russ Tamblyn) Dr. Amp show, which Nadine Hurley (Wendy Robie) watches while sipping a protein shake from the desk of her very own business called Run Silent, Run Drapes — a play on the title of the 1958 film Run Silent, Run Deep starring Clark Cable and Burt Lancaster. As Nadine watches, she says “he’s so beautiful” out loud to herself, in reference to Jacoby. Where the hell is Ed? And why does Nadine seem more, well, out of it than usual?

Over at the Horne house, we’re happy to see that Johnny (played here by Eric Rondell) survived his nasty encounter with the wall in “Part Nine” but is not looking very good. He’s situated at the dining room table, fully restrained, staring at terrifying teddy bear robot with a Mr. Bill face that also kind of looks like a loaded pot bowl. Soon enough, Richard Horne shows up and, in one of the most difficult to watch scenes ever, violently chokes his grandmother Sylvia (Jan D’Arcy) demanding the code for the safe. Once he clears out not only the safe, but her purse and silverware, he calls her a cunt and leaves both her and Johnny slumped and crying on the floor. 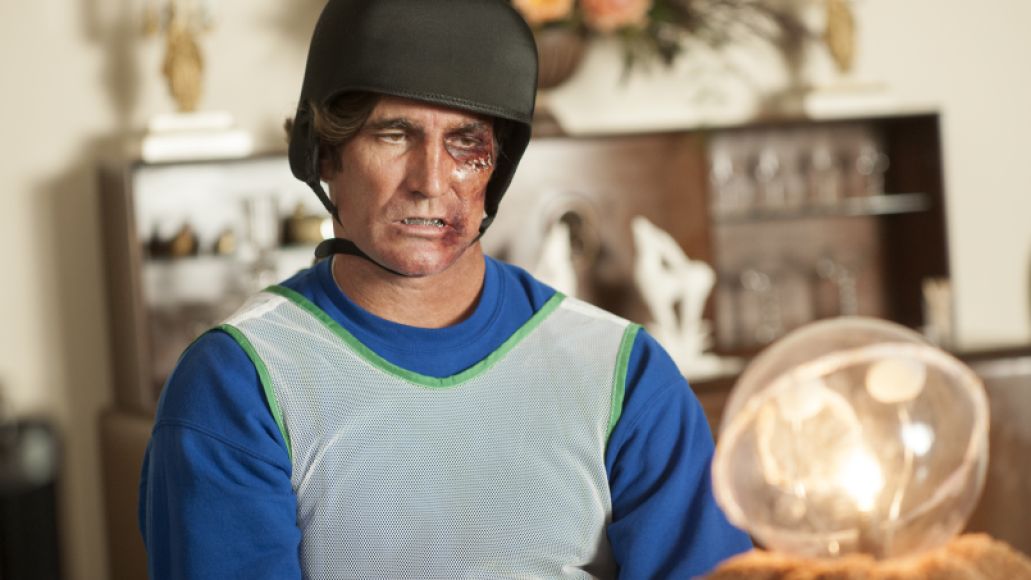 In his hotel room in South Dakota, Gordon Cole (Lynch) is sipping bordeaux and drawing a picture that looks like a tree growing out of a cow with a hand snatching at it when he gets a knock on the door. Upon opening it, he sees a vision of Laura and it’s interesting to note that it’s her in the “Donna, are you my best friend” scene from Fire Walk With Me. What could this be trying to tell us? Well, based on the fact that Albert Rosenfield (Miguel Ferrer) is there to tell him about the text that Diane (Laura Dern) received from Evil Cooper (“Around the dinner table, the conversation is lively…”), and that she replied back (“They have Hastings, he’s going to take them to the site”), maybe it’s a warning that we can’t assume who’s a “friend” anymore.

And finally, the Log Lady (the late Catherine E. Coulson) closes “Part 10” with a message from her log to Hawk (Michael Horse) saying “electricity is humming, you hear it in the mountains and rivers” and that “now the circle is almost complete.” She also urges him to watch and listen to the dream of time and space, and says that it “all comes out now flowing like a river.” Bottom line: Hawk and Laura are about to get shit done. Let’s see if we get closer to learning how next week.

NEXT WEEK ON TWIN PEAKS:

— Benjamin Horne (Richard Beymer) and Beverly Paige (Ashley Judd) get that dinner together.

— Hopefully, Richard Horne gets eaten by one of the lions on the nature program Sarah Palmer was watching in the premiere.

TONIGHT AT THE ROADHOUSE:

Rebekah Del Rio (with Moby on guitar) sing “No Stars”. You may remember Del Rio as the singer of “LLorando” from that gut wrenchingly sad scene in Mulholland Drive.