Electricity is the theme of “Part 16”, the last solo installment before next week’s two-part finale. After all, it was electricity that brought Evil Cooper (Kyle MacLachlan) to Richard Horne (Eamon Farren) in “Part 15″— if you recall, the two met outside of the Woodsmen’s Convenience Store after Evil Cooper answered a rotary phone — and it was electricity that tore them apart. “Goodbye, my son,” Evil Cooper says, shortly after mysterious lightning zaps Richard into oblivion at the end of a wild goose chase of mismatched coordinates, and it’s these parting words that confirm once and for all that Cooper did indeed rape Audrey Horne (Sherilyn Fenn) while she lay asleep in a coma following the bank explosion. Even though we suspected this revelation, we still feel the way Jerry Horne (David Patrick Kelly) does towards his binoculars: furious.

Prior to this, however, Evil Cooper had mentioned that he was given three sets of coordinates, and that only two of the sets matched up, the couplet that lead to this eerie spot. Seeing as though the spot was a trap intended to kill him, the third set is the one that will presumably take him to where he’s trying to go … back to Twin Peaks. This third set, given to him by Diane (Laura Dern) over a text message, was previously sent only partially, so he texts “ALL” to her along with an ominous smile emoji. 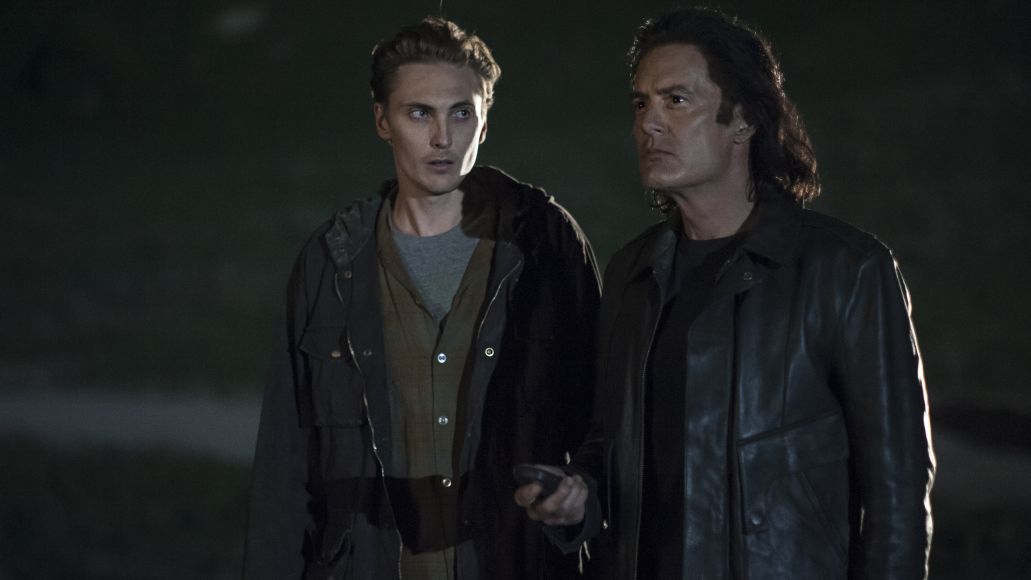 Still in South Dakota, an emotionally shaken Diane fires back the full string of numbers as she sits at her hotel bar. “I hope this works,” she tells herself, before heading upstairs to see Gordon Cole’s (David Lynch) team. As she gets up to go, we see there’s a gun in her purse, and coupled with the thudding industrial beat of Lynch’s remix of Muddy Magnolias’ “American Woman” (which appeared in “Part 1”), the overall feeling is that something really, really bad is about to happen. Before she can even knock on the door, Cole invites her into his room, as if he just knew she was there, and Diane takes a seat across from Cole, Albert (Miguel Ferrer), and Tammy (Chrysta Bell).

Tearfully, Diane recalls the night that Cooper had come to her apartment a few years after the two initially broke communication. She explains that she thought this was the same Cooper that shared a kiss with her a long time ago, but that when they kissed that night, there was something wrong about this Cooper. She then confesses that he raped her, and that’s when things start to get really weird. “I’m not me,” she admits, referencing the Sheriff’s station, and as she continues to lose control, she reaches for her gun. Albert and Tammy both shoot her in time, but rather than die, she ricochets away into the Red Room, where she meets MIKE (Al Strobel), who tells her that she’s been “manufactured.” Naturally, she tells him to fuck off before joining Dougie as the latest gold ball in Twin Peaks. Who knows what exactly this all means. 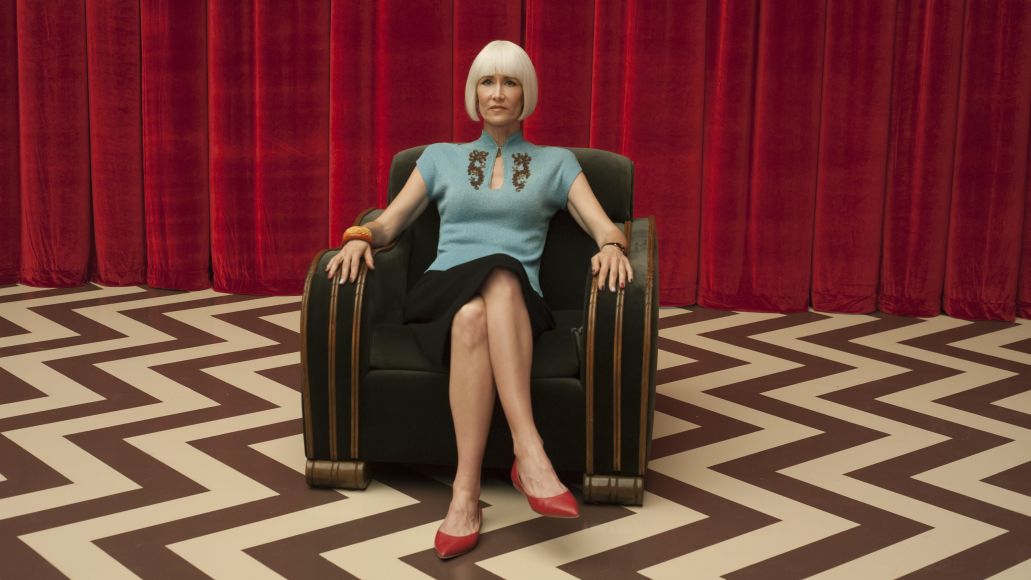 What we do know is that Evil Cooper is on the prowl for 01.) The Experiment, 02. Dale Cooper (MacLachlan), 03.) Judy, and likely 04.) Naido (Nae Yuuki). With only two hours left, chances are he’ll come to blows with all four in one way or another. We’re pretty sure we know that The Experiment is the original evil that birthed BOB, and other BOB-like creatures that have caused Twin Peaks to be the prettiest hell mouth on earth (er, space?) for all these years. We know who Dale Cooper is, duh (or at least, we think we do). However, there’s still a great deal of mystery when it comes to Judy and Naido.

One theory I had tonight, however out of left field it may be, is that just as Evil Cooper raped Audrey and made Richard, perhaps when he raped Diane, he made Judy. We learned this week that the Diane we’ve seen so far is a “tulpa” (aka, a doppelgänger), and since we’re shown time and time again that timelines aren’t really a thing here, maybe the real Diane died a long time ago? Does “the real” Diane have a kid out there somewhere named Judy? Or is Judy the twin sister of Josie Packard? Or are Judy and Naido one and the same? Also, is The Experiment living inside of Sarah Palmer? ::steam comes out of ears and head explodes:: Someone make this stop. 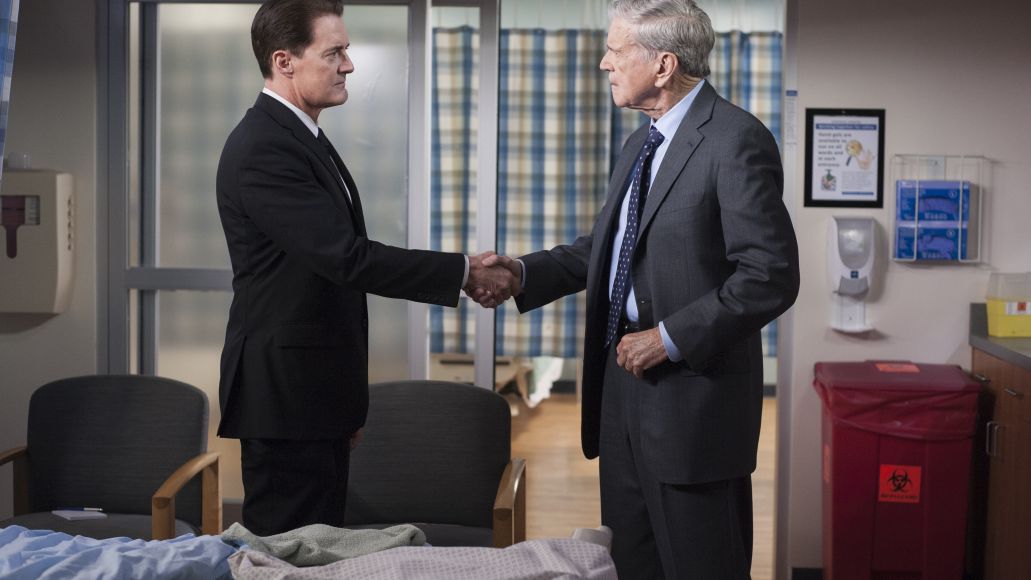 Moving on with the electricity theme, it’s also responsible for finally bringing back Dale Cooper, Special Agent of the Federal Bureau of Investigation (full title required here), who’s been operating at about 20% mental capacity this whole time, stuck in the life of a manufactured Dougie Jones. Thanks to an opportunely placed metal fork in a light socket, and a brief coma, he’s now back at “100 percent,” and seeing that moment unfold was just one of many highly emotional moments this week. When he comes to in his hospital room, moments after that tell-tale humming fills the space, he has an exchange with MIKE that brings heartfelt closure to the Jones family, as we’ve known it during these 16 “parts.”

Ripping the tubes out of his nose, he asks MIKE if he has “the seed,” aka the aforementioned gold ball that Dougie turned in to when he was sent back to the Black Lodge. MIKE confirms that he does, and Cooper says, “I need you to make another one.” Let’s never forget for one minute that Cooper is a hero. He’d never leave Janey-E (Naomi Watts) and Sonny Jim (Pierce Gagnon) without a dad. (Even if that dad is another manufactured one.) Before he leaves Vegas, he says his official goodbyes to the two of them in the Silver Mustang Casino and promises them that Dougie will be coming through their red door very soon. Personally, I’m going to really miss Janey-E and place my vote right now for a spin-off revolving around her yelling at people. Donna Hayward could be her best friend on the show because … whatever the hell happened to her anyway? 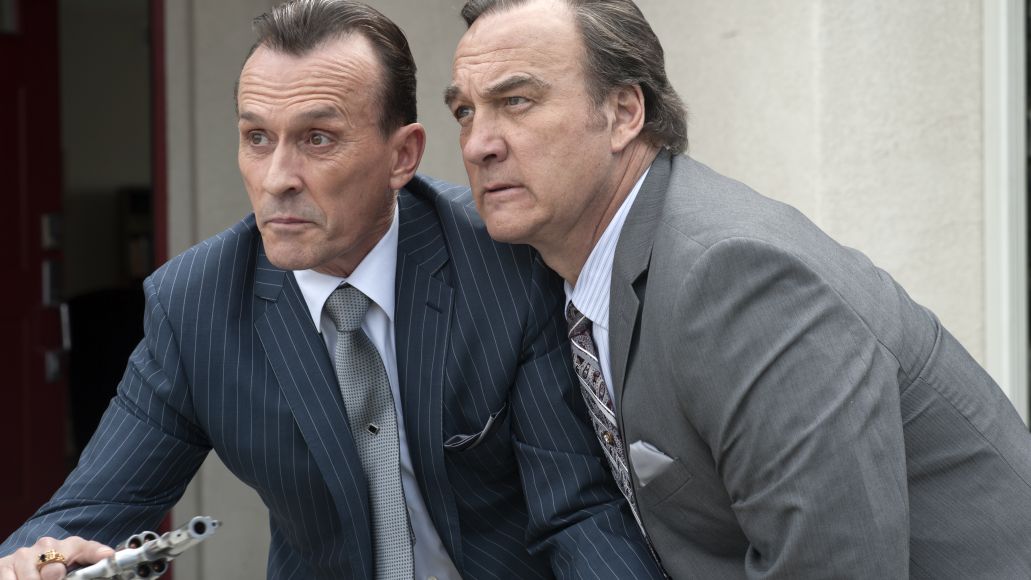 “It was like what, electricity?” Is a snippet of a conversation being had by the Mitchum Brothers (Jim Belushi and Robert Knepper) right before a shit storm of danger unfolds outside of the Jones residence. Both the Vegas FBI as well as Chantall (Jennifer Jason Leigh) and Hutch (Tim Roth) are staking the place, but with different motives for doing so. Chantall and Hutch are there to kill Dougie/Cooper, but end up being killed by a randomly crazy neighbor who’s mad they parked too close to his driveway. Rest in peace, burger lovers, you’ll be very missed as well. The Vegas FBI are there to hunt down Dougie/Cooper for Gordon Cole, who doesn’t know that Cooper is headed towards Twin Peaks via the Mitchum Brother’s private jet.

Christ on a cracker there’s a lot to unfold here, and we haven’t even made it to the Roadhouse yet, but Audrey (Sherilyn Fenn) and Charlie (Clark Middleton) finally do, and sit at the bar drinking martinis while Eddie Vedder performs on stage. How ’90s of them! After Vedder performs, our favorite host returns to introduce “Audrey’s Dance” and the dance floor clears to make way for the woman herself, who hand jives her way out there looking a bit more “Walk Like An Egyptian” than “Audrey’s Dance.” Whatever, it still gave me multiple eye-sweats nonetheless. 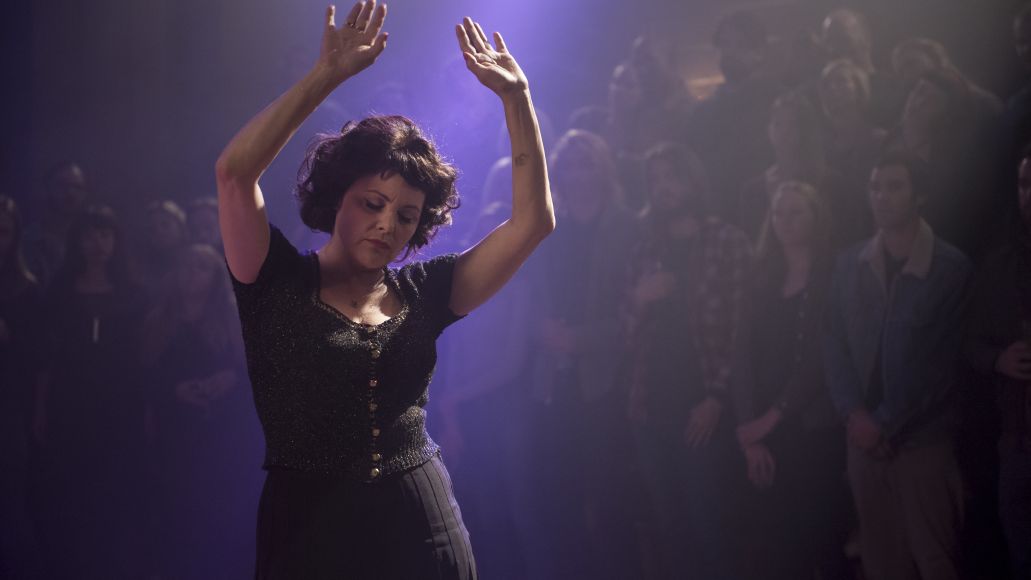 Sadly, this beautiful moment is broken up by the violent reality of the Roadhouse when a man runs in to sock a guy who’s standing by his wife. Frightened, Audrey runs to Charlie and pleads, “Get me out of here” and we then flash to her face, sans makeup, in a bright white room, looking into a mirror while electricity closes the show. Are we going to learn in the finale that everything we’ve seen so far has taken place in Audrey’s coma dreams? There are so many mysteries to be solved here. Oh fuck it, let’s just throw off the saddle and ride this white horse into the final credits.

— “People are under a lot of stress, Bradley” – Rodney Mitchum

— “I know. Fuck You.” – Diane, after being told by MIKE that she was manufactured

— “Does a coma have something to do with electricity?” – Sonny Jim

— Who is the real Diane? Is she Lucy? Naido? Billy? Andy’s Rolex? The ghost of Waldo the bird?

— Are we ever going to find out what the Fireman meant in “Part 1” when he told Cooper to “remember 430, and Richard and Linda?”

— Whatever happened to Red?

— So, we’re just never gonna bring up Donna, is that right?

— “Laura is the one,” but are we gonna find out what that means?

— This is all gonna end with Sarah eating everyone, right? Cool.

Eddie Vedder performs “Out of Sand”…