Ryan Adams has made waves in recent months for not-so-nice comments about alt-J (“It’s like a mosquito bite — if you ignore it, it’ll go away”) and The Strokes (“I should’ve forced them to get addicted to writing better songs”). Now, he’s thrown a verbal head grenade in the direction of Father John Misty.

In response to FJM’s upcoming appearance on Austin City Limits, Adams tweeted, “It’s so wonderful you booked the most self-important asshole on Earth to ‘break it all down for us’ while he does his Nick Cave impression.” Adams went on to refer to FJM’s Josh Tillman as “Elton Josh” and “Sir Fuckhead,” adding, “He sounds like shit Elton John but if he was just sitting in a corner staring at his hands on LSD.”

Father John Misty famously spoofed Adams when he ironically covered Ryan Adams’ own covers album of Taylor Swift’s 1989. It seems like RA is still salty about the whole thing. 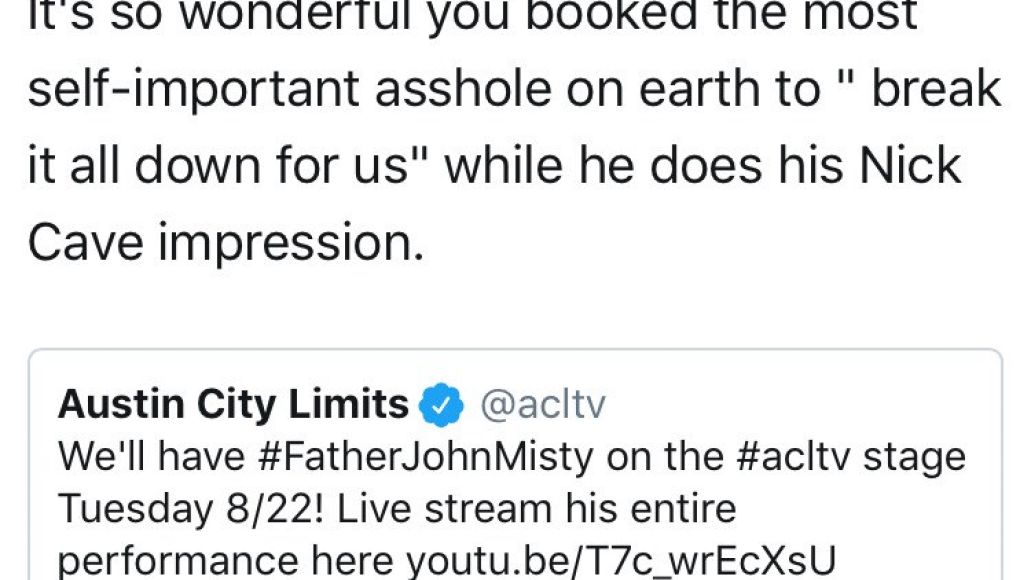 Update: In a subsequent Instagram posting, Adams apologized for his comments, writing, “‪I’m human & I have bad days. It happens. I apologize. ‬ I took a deep breath & remembered I can always do better‬. As a human I am never going to be done working towards being more compassionate, peaceful and open. So I leave this here as a reminder. I am very tired but it’s no excuse to be cruel to others, even if they have shown me that same meanness. It is better to love.”