The Tick: the brightest, boldest star in the world of superhero comedy. Since the late ’80s, this confused cyan crusader has doled out comedic justice across indie comics, animation, and live-action television. Every decade has a defining and beloved iteration of The Tick. This time, The Tick and his begrudging, moth-suited sidekick, Arthur, are breaking into the world of streaming television over at Amazon. But 15 years after their last foray onto the small screen, the entertainment world has fundamentally changed, and they’re not the only superheroes on the scene.

In theory, even with modern media jam-packed with comic-based programming, The Tick and co. would have no problem standing out from the crowd. (A huge, blue bug suit and a rogues gallery of characters like Bat Manuel, Chairface Chippendale, and Mucilage Man will do that.) However, when the pilot for Amazon’s Tick appeared a year ago as part of a vote-for-a-show-and-we’ll-green-light-it campaign, the suggested series was a far cry from the happy-go-lucky satire of superheroics the franchise is known for.

In this version, neurotic accountant Arthur (Griffin Newman) is the show’s true leading man and now has a full-blown superhero origin story. When he was a kid, he had a front-row seat as his dad became collateral damage in a superhero tragedy that also took out Arthur’s favorite team, The Flag Five. But unlike the Dark Knight, Arthur didn’t focus this trauma into becoming the bane of all evil-doers. He’s been dealing with massive psychological baggage and mental disorders ever since, and at the epicenter is the supervillain that ruined his life: The Terror (Watchmen’s Jackie Earle Haley). The Terror died several years later, but Arthur is convinced that he’s still out there, running a shadow organization. So by night the pencil pusher is a paranoid conspiracy theorist. The latest lead in his campaign to expose the truth, has Arthur crossing paths with the gigantic, cartoon-like Tick (Peter Serafinowicz), who might just be a figment of his imagination.

Sound shockingly bleak and heavy-handed? It is. The Tick pilot was made the same year that gave us the pinnacle of convoluted grimdark garbage: Batman V. Superman: Dawn of Justice. Meanwhile, the industry was scrambling to pivot after the surprise success of Deadpool’s rated R comedy romp. Unfortunately, the Tick team doubled-down on the grittiness of the former instead of letting their freak flag fly. However, one year later, we’re happy to report that The Tick’s creator/writer/artist/director/producer/jack of all trades, Ben Edlund, and his team did some tweaking. With five new episodes under their belt, they’ve polished this still quite different take on The Tick to a more appealing sheen of cobalt blue.

“Taking The Tick seriously was the funniest thing I could think to do,” Edlund said in this year’s Tick panel at San Diego Comic Con. In theory, it could work. One of the Tick’s indie comics bedfellows is Bob Burden’s Mystery Men. Their bag was always darker, working-class superhero comedy. With that property woefully languishing in legal purgatory, and the world of The Tick only a slight tonal shift away, there’s no reason we couldn’t have the best of both worlds. Yet, The Tick’s pilot episode is too dark, too sad, too raw. When The Tick finally shows up, his goofball lines and unwitting antics are clunky both in delivery and visual portrayal. The disparate elements have an impossible time finding equilibrium. There is satire loaded into the pilot episode, but it’s not … funny.

The tone of the pilot wasn’t a fluke either; they went straight to the source for grim superheroics: the director of the first two episodes is Wally Pfister, Academy Award-winning cinematographer for Christopher Nolan’s Batman Trilogy and Inception. Fortunately, the second episode does damage control for many of the failings of the debut. Most importantly: no, The Tick isn’t in Arthur’s imagination. As soon as the titular character gets a chance to live large in The City, bewilder the supporting cast, and deliver his trademark motivational ponderings, everything changes. Serafinowicz seems more comfortable in the role, too. Following the career-highlight performance of Patrick Warburton from the 2001 series is no easy task, and as the series progresses, the new Tick fills the suit admirably. A suit – by the way – that’s also much improved from the pilot. It’s a major change swept under the rug by a throwaway line and one that’s forgivable for the tremendous visual overhaul the show has received. 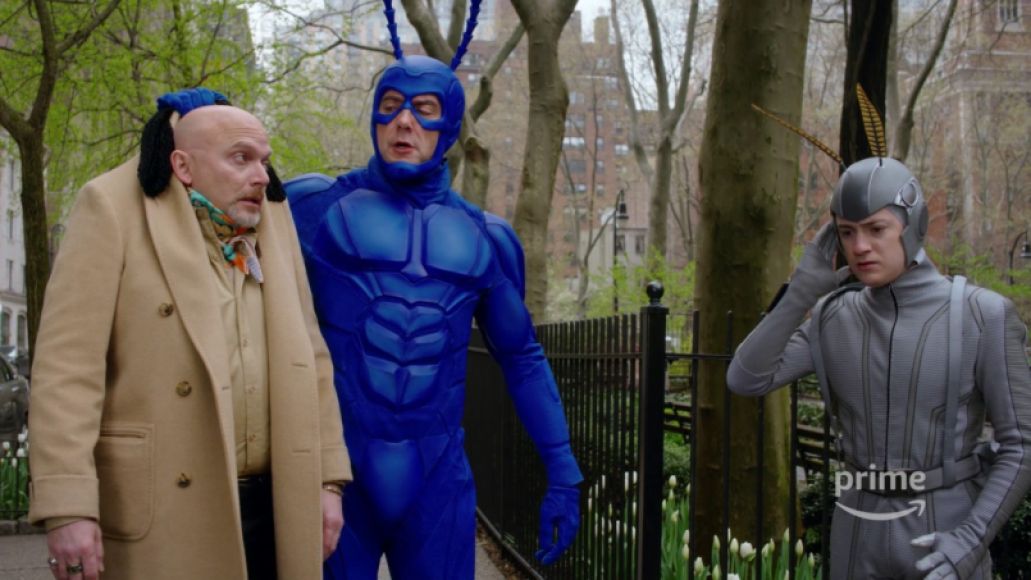 What’s most different between this series and prior iterations is its emotional focus. The animated series was pure surreal comedy; the prior live-action show was a slice-of-life sitcom, both taking full advantage of a supporting cast and backdrop hinging on a world of superheros. This series is more intimate. You won’t see the Tick and Arthur playing off an egomaniac Batman and a patriotic superheroine every episode (the death of The Flag Five made sure that heroes steered clear of The City). Instead, they’re paired with regular people, like the guy who runs the bodega down the street, a homeless dude, and most importantly Arthur’s sister, Dot (Valorie Curry). This former side character has been upgraded to a major player in the foundation of Amazon’s Tick. As a first responder, she’s a hero in the real world, and she and Tick become the angel and devil on Arthur’s shoulders, pulling him between common sense and the extraordinary.

Arthur’s evolution from “a bystander in a long line of bystanders” has been a plot point throughout every version of The Tick, but this time it’s the core of the show and is woven into a storyline that sees him literally facing his demons. His donning of the mysterious, moth-like supersuit puts him directly in the crosshairs of The Terror’s associates, enemies, and the elderly, presumed-deceased villain himself. Miss Lint (Jane the Virgin’s Yara Martinez) is a new character and the chief antagonist – an electricity-tossing enforcer whose static cling makes her a literal dust magnet. She used to be The Terror’s right hand, but his death left her diminished. Defeat at the hands of The Tick and Arthur is the kick in the pants she needs to get clawing her way back up the villainous ladder. Then there’s Overkill (Scott Speiser) – a dour, skull-faced vigilante who reads like a spin on the animated series’ Punisher parody, Big Shot, but with a look and style more along the lines of DC’s Deathstroke. He lives on a sentient boat, called Dangerboat, voiced by the new go-to for sarcastic A.I.: Alan Tudyk. Everyone want’s what Arthur’s got, except Arthur.

The new series’ emphasis on serialized storytelling over episodic adventures actually brings it closer to the feel of Edlund’s original comic books. The same can be said of the strong equilibrium between surreal comedy and life-and-death consequences. It’s the first time in The Tick‘s history where a series has felt capable of adapting one of the most poignant panels in the comic; where, after a zany romp, The Tick cradles a woman who’s just been stabbed, and as his personal illusion of the world breaks down, he muses aloud: “This isn’t supposed to happen.” A moment like this hasn’t happened so far, but it could. 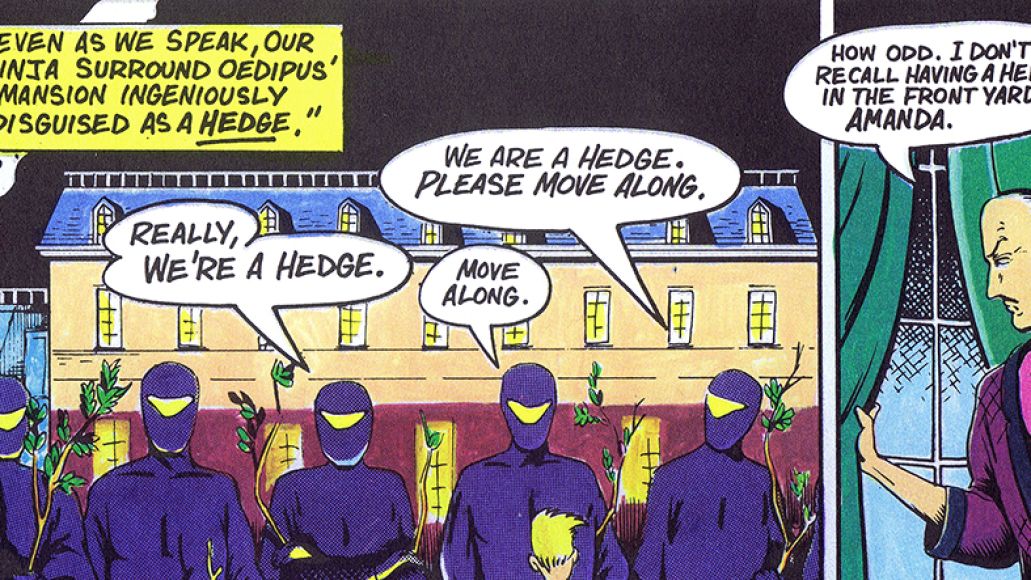 With Marvel’s Netflix shows leaning so hard on gritty realism, Amazon might have a sharply parodying antitheses on their hands. This would be doubly so if the new Tick takes on one of the comic’s previously unadapted, and most memorable storylines: Night of a Million-Zillion Ninja. It’s a send up of the same Elektra stories that season two of Daredevil was based on. The Tick’s take on it is more relevant now than it was 30 years ago and just as hilarious. It could be Hot Shots to Daredevil’s Top Gun! Again, not something even remotely hinted at, but the fact that the new series seems capable of pulling that off speaks to its success in striking the balance needed for a funny, yet serious Tick.

The best moments of the series so far are where the show’s new dynamic meets what worked so well in prior iterations. The weird politics and social dynamics of a world filled with heroes was something done very well in the 2001 series and now, under a darker lens, it has a more Watchmen-like dymanic. But, like, a funnier Watchmen. For example, early on, Arthur gets arrested for being at the scene of an alleyway murder committed by Overkill. His identity is protected under an amendment enacted after a hero called Cat-Man-Dude was arrested and unmasked, allowing villains to rip his life apart. Arthur knows this, but slips up and gives his first name, thereby being stuck with his unassuming superhero moniker. Budget limitations kept the former live-action series from tackling the more absurd Tick-sized problems – for instance, Dinosaur Neil, a scientist that accidentally ate some Dino DNA and grew into a towering half-reptile beast. Authorities tried to lure him with a gigantic pair of slacks. Similarly, we now have the Very Large Man, dubbed the “VLM” by the news. The nude, skyscraper-tall VLM doddering through the suburbs is a background crisis, drawing the attention of The Terror’s arch-nemesis and Superman analogue, Superian (Brendan Hines). It’s a hilarious plot point that could only happen in the world of The Tick and a great bit of world-enhancing flavor through the first several episodes.

These evolutions of The Tick’s prior strengths are fantastic, but some of the series’ most memorable moments are unique to this new slice of blue. In episode four, The Tick crashes Arthur’s stepdad’s birthday party. The quirky not-my-dad, Walter (impeccably played by Lost’s François Chau), is delighted by the charming, childlike giant and their weirdness compliments each other brilliantly. “Well look at you,” says Walter, opening the door to the superhero. “Impossible!” plucks Tick in amusement at the strange man’s request. 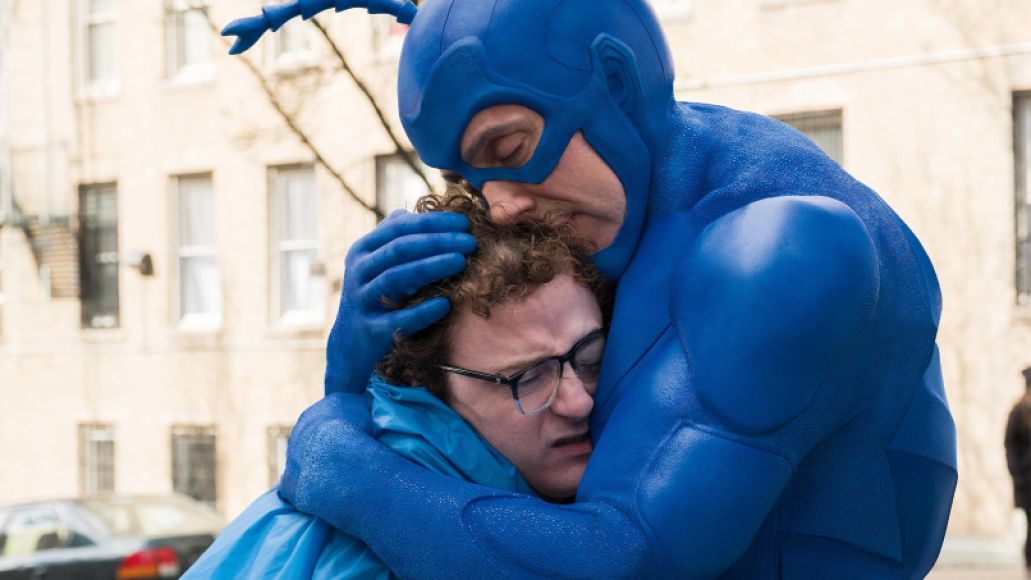 Classic! On a completely different end of the spectrum, the strongest scene of the pilot by far was also all-new: the horrific accident that kills Arthur’s dad and The Flag Five. It’s so savage. The violence is comedically overwhelming as Arthur’s dad is crushed, superheros stumble around blinded by syphilis, and an inappropriately gleeful Terror executes Arthur’s heroes in the streets, then eats Arthur’s ice cream.

The Tick debuts on Amazon Friday, August 25th . Unfortunately it’s not the entire first season, just the first six episodes. The remaining six come in early 2018, which is a damn shame because episode six feels like any other episode in the middle of a narrative — not a mid-season break. Hopefully lacking that punch will still bring audiences back next year. The team says they’ve got a five-year plan, and if it continues, we’ll see more characters that have occurred before, and next season, the heroes will gravitate back to The City – inviting in more absurd, slice-of-life superheroics.