Back in 2015, Denver outfit The Yawpers brought their blues rock sounds to Bloodshot Records with their label debut, American Man. The trio are now back with their follow-up, Boy in a Well, set for release this Friday, August 18th.

Produced by The Replacements’ Tommy Stinson (who also plays on the album) and Alex Hall (JD McPherson, Pokey LaFarge), Boy in a Well is a concept record about just what its title suggests. Set in WWI-era France, the story follows a mother who abandons her child down a well, where he grows up alone and afraid. The complex and ambitious tale is told both through 12 muscular, unpredictable rockabilly tracks as well as an accompanying comic book by the Legendary Shack Shakers’ J.D. Wilkes.

“I wanted to write a melodramatic tragedy, but one so tragic that it has kind of a necessary levity,” says frontman Nate Cook, who wrote the record in the wake of his failed marriage. “Musically, the intention was to make a biting, frenetic, punk fueled record that sounded like it was recorded in the ’50s. Nodding to the past, present, and future. Emphasis during recording was placed almost solely on the spirit of the take and or song, often sacrificing polish for authenticity.”

Pre-orders are available here, but you can listen to the entirety of Boy in a Well ahead of its official release below.

Boy in a Well Artwork: 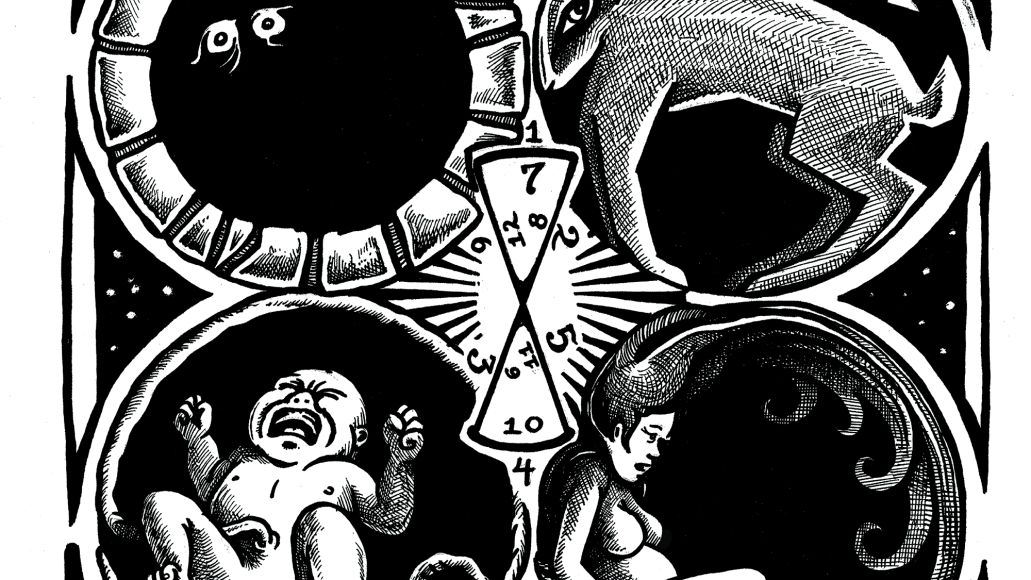 In addition to sharing the new album with Consequence of Sound, the band has provided an exclusive track-by-track breakdown of the entire thing. Below, Cook takes us through the record’s theme and creation, while drummer Noah Shomberg digs into the songs’ structure and dynamics. Read on to get the gritty details of Boy in a Well.

Nate Cook (vocals, guitar): As the first song of a record that’s both historical and narrative, the writing on this one proved maybe the most difficult. Sonically, we all tried to maintain a very muted, fogging opening, and then midway tear through to something more immediate. On the narrative side, this is the song where the eponymous character is conceived by a young French girl and a soldier returning from the front lines. Instead of hope, I tried to set up a life that is entirely perverted by and beholden to the past.

Noah Shomberg (drums, vocals): One of the main musical themes Jesse [Parmet, guitars/vocals] and I attempted to address with BIAW was to create intensity without using large dynamic shifts as a tool. However, sometimes you just have to smash. The song starts out nebulous in groove and slowly builds intensity via rhythmic shifts. The purpose of the drums and guitar here is solely to create a bed for the vocals to rest on. The song builds progressively throughout the third verse but not necessarily in volume until the last vocal melody refrain.

“A Decision is Made”:

NC: Obviously a more rockabilly tune, and necessarily. We needed to forward the narrative substantially here, so there’s quite a bit of exposition and explanation. Rockabilly lends itself to wordier songs, and so I was able to cram a pregnancy, parental abuse, a birth, and a messianic complex into three minutes.

NS: Straight up rocker. I tried to re-imagine the “rockabilly” shuffle on the drum kit and explore different ways of phrasing it. Where can I place accents to help build tension and build intensity through the verses?

“A Visitor is Welcomed”:

NC: The girl who threw our titular character down a well has dealt with the trauma through delusion. She believes her child is the second coming of Christ, and brings offerings of food, gifts, etc to the monster that is growing underneath.

NS: The groove on this song was inspired by a few late nights watching Ken Burns’ documentary on Jazz. We wanted to use a groove that sounded like the “Big Four” as a nod to our musical heritage. It’s a groove that originated from drummers in second line bands in the late 1800s.

NC: The first song told entirely from the perspective of the Boy in the Well. I attempted to not use personal pronouns, and make sure his description were limited to comparisons, as he has had no interaction with the outside world, and has no real sense of “I”.

NS: Stay out of the way. The function of the drums here is to support and add color. Nothing more, nothing less.

NC: In a shameless ripoff of Steinbeck, this song finds a rabbit falling in the well, and the boy’s desire for love killing it. This becomes the impetus for him climbing out.

NS: Looking back, this song felt like it came together the easiest. It was one of the first songs we jammed on and completed. The drum arrangement is all over the place. It’s maniacal and suits the performance of the song just right. We recorded this song with only one microphone which forced me to hit the cymbals a little bit differently. Instead of crashing with the middle of the stick, I played everything with the tip of the stick. I think it adds a cool sonic texture to the drums in this song.

“The Awe and the Anguish”:

NC: We recorded the first two thirds of this song entirely on a field recorder that was the same [Alan] Lomax used. We used one mic, and self controlled dynamics, which was new for us. This serves two functions, one being demarcating the boy’s transition from the well to the outside world, and also to demonstrate the alien nature it presents to him.

NS: This was another attempt to stay out of the way of the vocals (and story). The melody and guitar part are so vibey, all it needed was some maraca and a few downbeats on a marching bass drum … until the end.

NC: This is a song entirely about the boy’s search for identity, and finds him using personal pronouns as he grasps a greater sense of who or what he is. Given his upbringing, most of his conclusions are pretty menacing. The last repeated line means “I am the second coming of Christ” in French.

NS: In my opinion, this song achieved everything we were trying to do with the performances on the record. We use rhythm to build the intensity of the whole song. The drums start out stripped down, eventually adding each part of the drum set and then variations of the basic groove to build tension. Nate’s vocal delivery is incredibly dynamic, starting in a low Johnny Cash rumble and ending in a Nick Oliveri style scream. The vocal delivery complements the lyrics most effectively on this song. Additionally, Jesse’s guitar playing is straight forward and outside of the box all at once.

NC: In the course of her routine visits to the well, mother encounters son. They recognize each other. In a bizarre sacrifice form, and out of some novel primal instinct in him, they have an “Oedipal” encounter.

NS: Rhythmically and harmonically, this song is outside of the wheelhouse. One of the more interesting instrumental arrangements on the record for me. We tested what we could get away with on this one, but still kept the style somewhat familiar.

NC: The encounter is predictably violent, and some innate ethical boundary has been crossed. The mother lies still, presumably dead, and the boy, having destroyed (again) something he loves, is wracked with agony.

NS: I don’t recall what inspired us to write a rockabilly song in 5/4, but we got a kick out of how unusual it sounded. It took us several hours of playing various grooves and parts in 5/4 to wrap our heads around it. Nate and I keep the groove straight forward and Jesse does a great job at smoothing out the angular feel. The transition to 4/4 in the chorus gives the song some serious momentum. Some of the playing towards the end of the song is a personal nod to a drum hero of mine, Jon Theodore [of Queens of the Stone Age and The Mars Volta]. Lastly, I think this is another instrumental arrangement that compliments the lyrics/story.

NC: This is basically a suicidal lament, as the boy throws himself back down the well. Finishing the job this time.

NS: This is a lullaby, so I did what seemed natural: Stay out of the fucking way. We used a ribbon mic placed about three feet above the tom, cranked the gain, and I played the floor tom with my hands. We achieved a pretty cool sound.

“Linen for the Orphan”:

NC: Months have passed. As it turns out, the girl was only rendered unconscious during the encounter with her son, and has come to term with their child. Unfortunately, she dies in child birth. Her parents, not wanting the child, decide to get rid of him. After a doctor smothers the child with a sheet, they need to find a place to dispose of the body.

NS: This guitar/drum vibe was inspired equally by the Cramps and the Dead Kennedys. I loved the feel of the song “Police Truck”, so Jesse and used that for some of the inspiration for the verse grooves. My favorite parts are the builds in the song. I tried to use the bells of the cymbals to build intensity rather than just crashing. I also tried to get as quiet as I could but without ever getting too loud. Tension, release, tension, release.

NC: The body is taken to the well, and thrown onto the bones of its father.

NS: The main riff was taken from a jam session that Jesse and I had from the previous summer. We brought that to a rehearsal and Nate pushed the song into a surf pop direction to juxtapose the lyrical content. Irony, a classic Cook move. We had our pal, Tommy Stinson, lay down some 12 string on this track which added a pretty and twangy sonic layer to the song. All in all, what better way to end the record?

The Yawpers give a track-by-track breakdown of their new concept album, Boy in a Well: Stream