There comes a point where moving through life is no longer as simple as lather, rinse, repeat. Terribly powerful as it is, your mind can trap you in place, its thoughts weighing so heavily on you that your limbs simply don’t want to propel you forward anymore. We all experience these bouts of mental health lapses, and Canadian garage punks Tough Age have now given that feeling its own anthem.

Entitled “Me in Glue”, the new single comes from the band’s upcoming Shame, out October 20th on Mint Records. The track comes in on appropriately sticky bass lines, thick as Elmer’s. Guitars break it up into something more playful as the song progresses, adding a garage-surf coloring to the chaotic drumming. But there’s nothing chilled out about the lyrics, as frontwoman Penny Clark belts, “It’s all fake and I’ve got to try it/ Lost my opinion, I’ve got to buy it/ Wanna fight back, but I don’t like it either/ Can’t lose your friends when you keep it a secret.”

It’s not just angsty unrest that inspired “Me in Glue”, as Tough Age reveal in our latest Origins feature. Check out the trio’s collection of inspirations, which includes everything from Rush to The Urinals, ahead.

The Urinals are a perfect band. Smart, raw, sarcastic, gleeful punk music where you can hear the actual people making the music in the recordings. I’ve loved the Urinals since the first time I heard “Dead Flowers”. I’ve never stopped and I’ll always want to make music like that. — Penny Clark

Eleanor Davis — How To Be Happy: 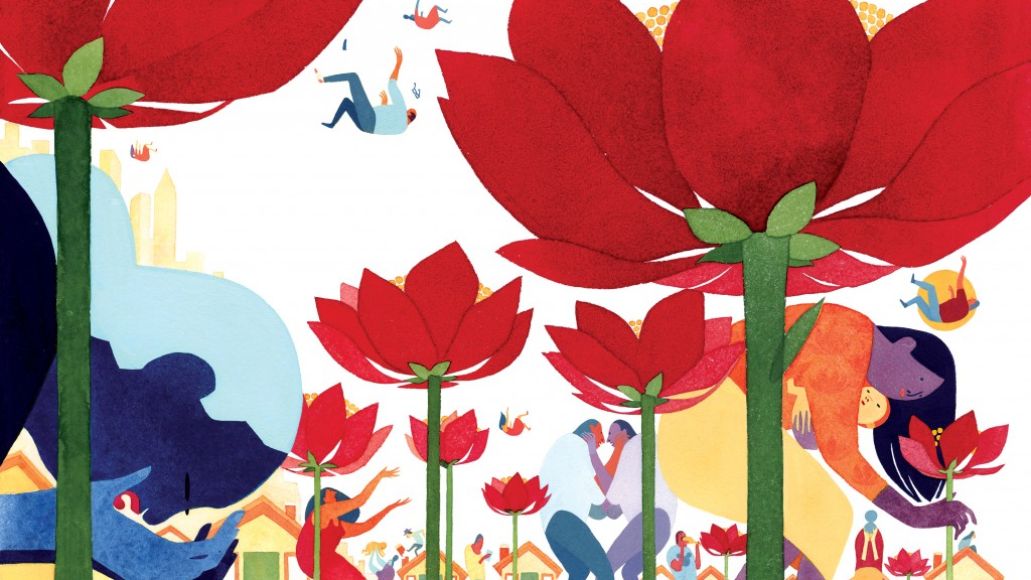 A collection of stories about people battling their feelings of loneliness and inadequacy, often-to-always not managing to overcome them. But at least they’re battling. I forget to do that sometimes. — Penny Clark

The guitar tone I was trying to specifically get on this song was Richard Thompson’s from the album Shoot Out the Lights. I adore this record but in the past, had my guitar tone been anything close to Thompson’s on that album, I would have had a meltdown/fit. Trying to get comfortable with being uncomfortable. — Jarrett Samson

Bonehead riffs via The Ketamines’ “Line By Line”:

There’s something that thrills me when people get away with these completely ludicrous, dumb, nursery-rhyme riffs and I’ve always been jealous of them. Bubblegum is rife with these, and “Punk Citizen Rock” by Tronics is my absolute ideal of it (sadly it doesn’t seem to exist in a linkable way online), but “Line by Line” by our friends The Ketamines is another prime example. When I hear that riff, it feels like 99% of bands would go, “….no” and ditch it for being too stupid, and to me there’s a weird genius in being able to realize how good it truly is. I think I almost got there. — Jarrett Samson

I’ve never been a Rush “head” by any means, though I definitely respect their ambition and enjoy what they do. The same holds true for Neil Peart, as I tend to get inspired by drummers who do more with less (like Robert Gotobed, Palmolive, or Klaus Dinger). Yet there are certain Neil Peart drum fills that seem to subliminally sink into my head, like one tempo-slowing tom roll from “Fly By Night”. I chose that song for my “sponsor me” skate video back when I was a teenager, which you can watch above thanks to a VHS rip by my brother Peter. If you listen closely at 0:55, you can hear the same fill I play on “Me In Glue” two decades later. — Jesse Locke

Pre-orders for Shame are going on here. You can also catch Tough Age on select tour dates this fall; their full itinerary is below.

Canadian punks Tough Age share the Origins of their new single "Me in Glue": Stream