Just yesterday, John Carpenter announced that next year’s Halloween film would feature none other than Jamie Lee Curtis, the star of the original. After picking up their collective jaw from the floor, fans of the franchise rejoiced. Curtis’ Laurie Strode is one of the most iconic horror protagonists of all time, and it’s almost universally agreed upon that offing her in the opening scene of 2002’s Halloween: Resurrection was a mistake (though, to be fair, that’s the least of that movie’s problems). The question, though, is how will her character come back? There are a few different ways it could go:

– Least likely: Writers Danny McBride and David Gordon Green begrudgingly take a note from Rob Zombie, who brought back the dead mother of the series’ antagonist, Michael Myers, in the sequel to his own remake of Halloween. Does Curtis reprise her role to torment her big brother as an older ghost version of Laurie or possibly serve as his spiritual guide?

– More likely (though not by much): The surviving characters of the franchise (perhaps Laurie’s son, John) imagine what Laurie’s life may have been like if she hadn’t been unceremoniously stabbed and thrown off a rooftop by Michael.

– Even more likely (only slightly): We discover that Laurie actually isn’t dead, but somehow survived, faked her death, and yet again went into hiding after Resurrection.

That final option is obviously the most appealing to fans. The Halloween series is notorious for its convoluted timeline. After six films — one of which wasn’t even about Michael Myers — Halloween H20: 20 Years Later did an about-face retcon, pretending that sequels Halloween 4, 5, and 6 never happened. By ignoring the confounding bloodline elements of the series (which involved an ancient Druid curse and a cult seeking to control Michael), they were free to bring back their original protagonist to (seemingly) defeat her arch nemesis once and for all.

But Resurrection undid Laurie’s glorious return when the film killed her off, leaving a group of horn-dog college students and Busta Rhymes as the last defenses against Michael. The film was and still is unanimously and justifiably hated, so much that Zombie was permitted to remake the whole shebang in 2007, only further bungling the series’ multiple timelines. If all of this sounds confusing, that’s because it is. To better explain it, here’s a handy-dandy spreadsheet drafted up by my colleague and fellow Halloweenhead, Justin Gerber. It lays out the varying narratives and where they could go from here with McBride and Green’s upcoming film. 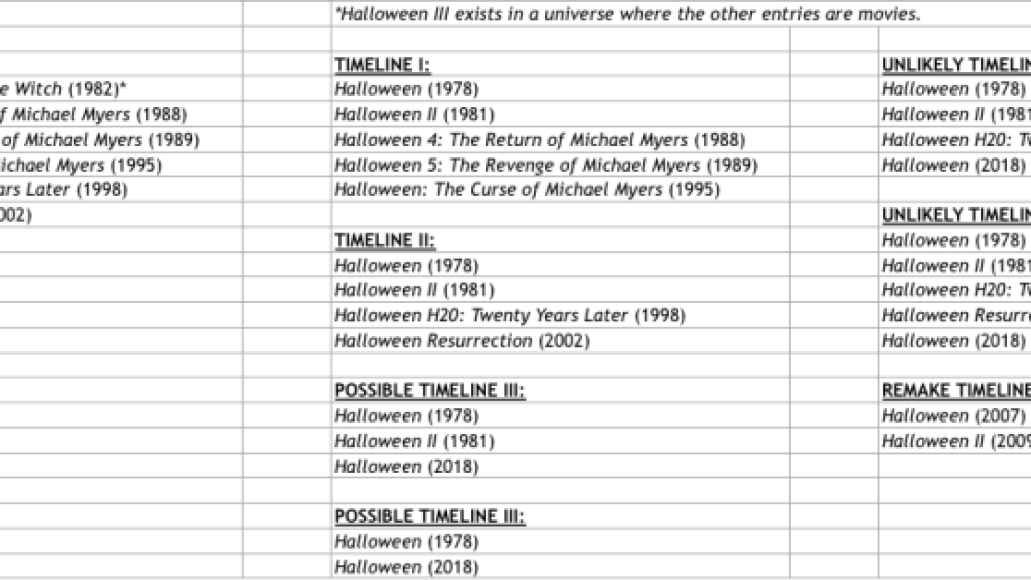 So yeah, snuffing out the majority of these sequels like the candle of a jack-o’-lantern seems to be the surest way for capturing the streamlined, quiet menace of Carpenter’s original film. Consequence of Sound Editor-in-Chief Michael Roffman even laid out how this could go in his Producer’s Chair feature two years ago. Given that McBride has confirmed that his and Green’s screenplay will be a continuation, not a remake, they’re likely following a similar approach to the one described by Roffman in his article. It’s the smart choice. It’s the choice that will result in the best movie.

Now, before we continue, let me be clear: In no way am I hoping that McBride and Green create a direct sequel to Resurrection. If we want a good Halloween movie, I recognize that the best and perhaps only way to do it is to make like Laurie at the end of H20 and sever the franchise’s history at the neck. In the bureaucracy of modern-day Hollywood, sometimes the only way to salvage a series is to give it a (relatively) fresh start.

But I’m also a firm believer in creative accountability. And a tiny, little sheriff in my head (one that looks like Charles Cyphers, perhaps?) believes that if you make your bed, you damn well better lie in it. Carpenter and Curtis already retconned the lesser Halloween films with H20, and now they’re most likely about to retcon that film as well. Granted, neither of them are the writer or director of this new Halloween, but they both played a significant role in taking back the franchise in the late ’90s — a move that split the Halloween universe and ignited the soon to be repeated practice of separate timelines. Curtis got the conversation going by wondering what Laurie Strode would be up to 20 years later, and Carpenter was even slated to direct the film until walking away after a financial dispute with series financier Moustapha Akkad. 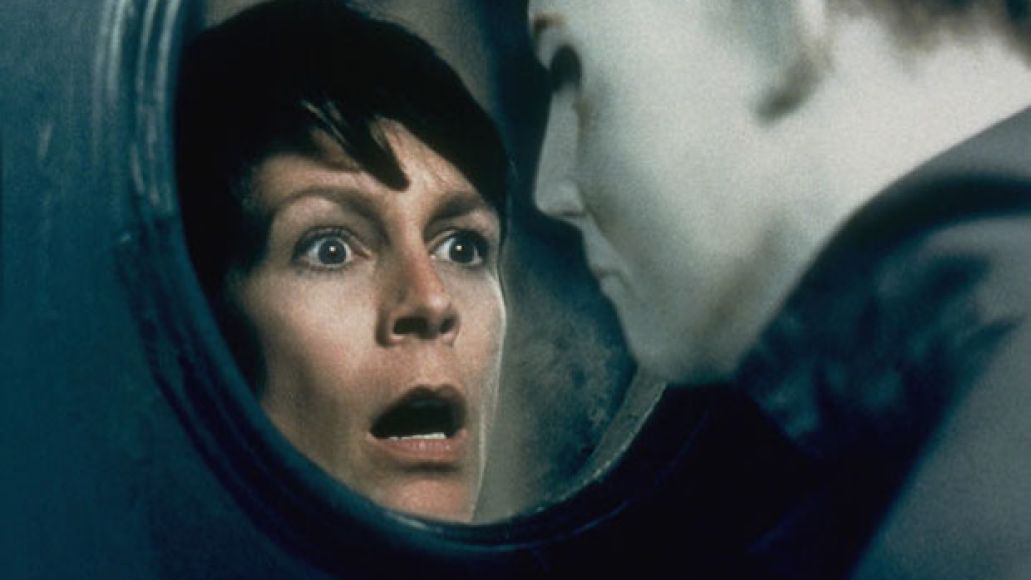 That’s not to blame any of this solely on Carpenter, as he didn’t end up directing H20 or Resurrection, nor is he directing the upcoming movie. Plus, it takes an army to bring a film to fruition. I just wish said army would feel some kind of intense ethical obligation to acknowledge the narrative of the entire Halloween canon, warts and all. For Curtis to star in a horror sequel that ignores most of the films that came before it, then star in another sequel that ignores the two films that came before it — it all just feels like a bit of a cop out. At what point does the snake stop eating its own tail? At what point does someone step in and say, “Fuck it. We made this mess, so let’s clean it up in a way that doesn’t involve just sweeping it under the rug. Let’s acknowledge this shit-show exists and actually fix it.”

Because ignoring it is what got us here in the first place. When H20 came out, it was a moment of rejoicing for Halloween fans. But when its sequel sucked, Dimension Films, Trancas International, and The Weinstein Company just decided to toss it aside and move forward with Zombie’s reboot. And why not? They had pushed reset once already. And when Zombie’s films left a sour legacy, they had no problem doing the same thing again. And again. And again. 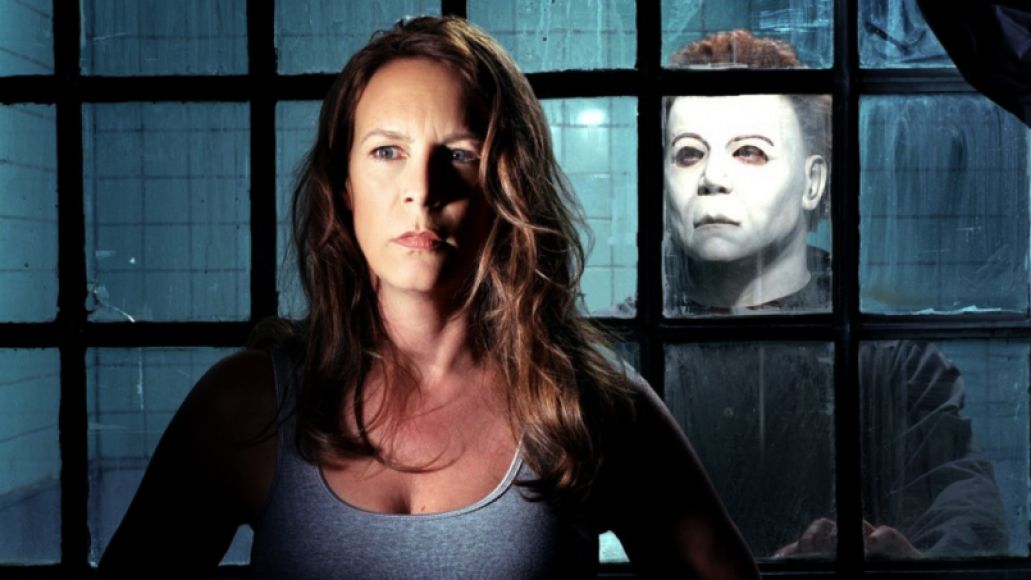 Even if the new Halloween is fantastic (and given the details so far, we have every right to believe that it will be), what happens when it gets its own inevitably shitty sequels? Do we just ignore those and make another brand-new sequel to the original film starring Jamie Lee Curtis? This is a horror series, goddamnit. Where are the stakes in Michael Myers stalking a protagonist who the producers can resurrect whenever the hell they want?

Having to follow the H20/Resurrection timeline could even be a boon for the series. If Lars Von Trier and Jørgen Leth’s The Five Obstructions has taught us anything, it’s that creative challenges or parameters often results in greatness. This can apply even to a horror franchise. Look, I get that this entire article is largely meaningless because, at the end of the day, a studio wants a film to make money. And when considering the minor Carpenter renaissance we’re in right now with his elder statesman status and flourishing music career, a back-to-basics approach is what’s going to make money, plain and simple. I get that.

But let’s pretend money, or even fan service, wasn’t the bottom line. Let’s pretend for a moment that the filmmakers aren’t confined by the creative shackles of the entertainment industry or the expectations of fanboys like myself. Instead, let’s make the restrictions all about the art. Let’s pretend that Von Trier managed to conquer his fear of flying, take a private jet to the Halloween set, and order McBride and Green to adopt his Five Obstructions experiment. Let’s pretend the filmmakers had to not only acknowledge H20 and Resurrection, but also the maligned bloodline sequels that came before them. What would the final product look like?

The closest thing I can think of is a comic series started by Stefan Hutchinson in 2003. In his run of Halloween comics, he follows the H20 timeline, even turning some of the shittier moments of Resurrection (including Laurie’s doomed incarceration at a sanitarium) into something horrifying and beautiful. Hutchinson has gone on record saying he’s never been a fan of Laurie and Michael being brother and sister. Yet, he still acknowledges their connection in his comic because, hey, that’s just the way it is. He came into an already-existing story, and as a writer, it’s his job to honor it. 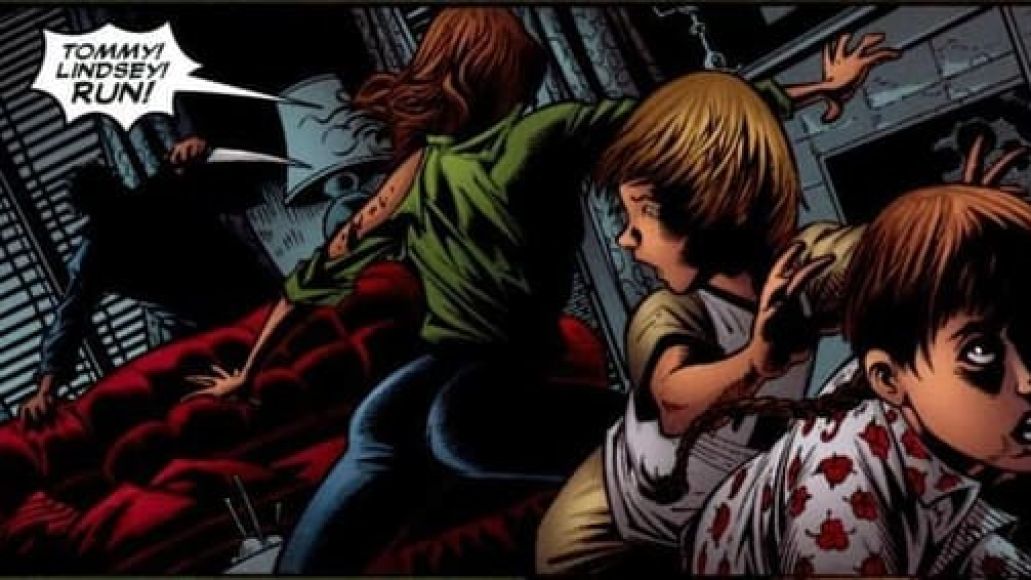 Hutchinson even takes his fidelity to the source material one step further by starting to weave in story elements from Halloween parts 4, 5, and 6, even though the franchise’s cinematic universe had written them off by that point. In Hutchinson’s world, the adult Tommy Doyle (the little boy Laurie babysits in the original film) is a comic book artist. We only get a glimpse of it, but some of his drawings center on Michael Myers and the Mark of Thorn — an integral story point from 5 and 6. The next planned arc of Hutchinson’s Halloween series was titled The Mark of Thorn and likely would have connected all of the films by having the bloodline sequels not be real events, but comics written by Tommy. Unfortunately, Hutchinson’s series got canceled before The Mark of Thorn got published.

Is that a seamless dovetailing of the two conflicting timelines? It’s hard to say without reading The Mark of Thorn, but there likely would have been some flaws. There likely would have been some clunkiness. But the concept alone shows creativity. It shows a writer respecting the lore of the past while also paving the way for something fresh and exciting. That’s more than I can say for the film series, which, over the years, has repeatedly ignored that former goal in hopes of accomplishing the latter. I’ll definitely be at the midnight showing of the latest Halloween film when hits theaters next October. I’ll probably enjoy the hell out of it. But I’ll also be hoping that it’s the last time the series has to be brought back to life.