A few days prior to the release of his band’s ninth album, you might expect the prolific Les Claypool to be locked away in some mysterious laboratory, cooking up some kooky ideas, thick, nebulous smoke bubbling beneath his feet. But instead the Primus frontman dials in after staying the night at a bed and breakfast in the middle of New Jersey, noshing on a bowl of pistachios. “It was this little, old lady’s house, and it smelled like mothballs,” he laughs. It’s a guttural chuckle. A beautiful, bellowing chime that exemplifies his passion for life. But don’t think for a second that Claypool will be taking a break from his fearless rock and roll eccentricities to start crocheting doilies. He and his wife were merely taking a day off before he returned to New York to jam with Sean Lennon, his partner in The Claypool Lennon Delirium.

Between the many different lineups of Primus and his many friends and family members that contributed to the band’s success, Claypool has a lot of moving pieces and characters to remember when looking back through his 28-year catalog. Each successive album jars a few more nutty names and legendary musician pals. With very few musicians would a guy called Flouncin’ Fred be lauded in the same breath as Tom Waits. But that’s the key to Claypool’s career: finding extraordinary, unexpected connections in music and twisting his desires into existential songwriting — and having a goddamnfucking great time doing so.

Now, click ahead as Claypool takes you from Suck on This to new album The Desaturating Seven, tracing his career from a cat named Tommy and a fisherman named John through to a set of goblins who steal the color out of the world. 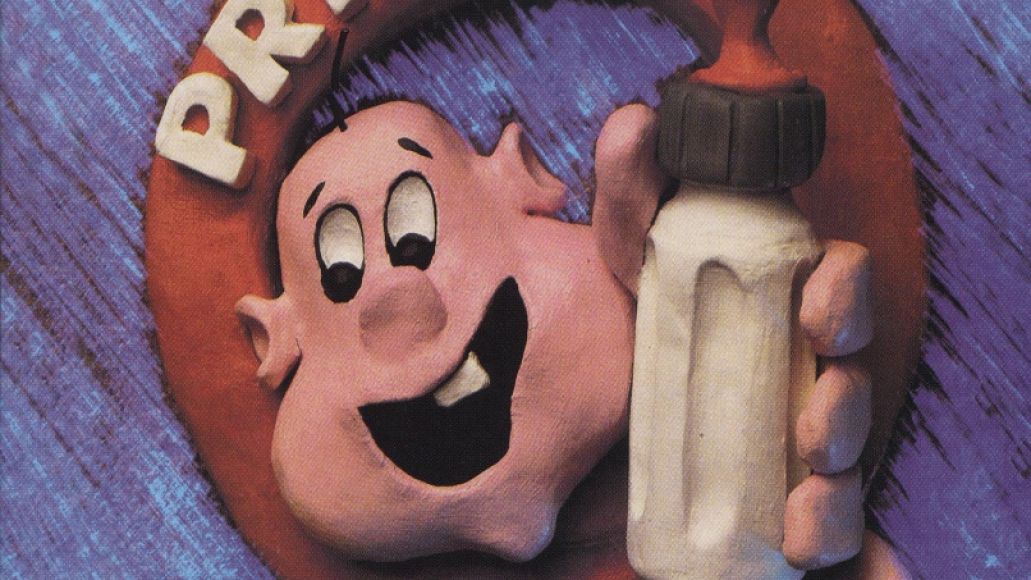 All the way back in 1984, Les Claypool teamed up with guitarist Todd Huth and a drum machine to become Primate. That drum machine would be replaced by a revolving door of drummers, until a group with a similar name forced Claypool to change his band’s name, thus beginning the era of Primus.

We didn’t have the money to go into the studio and make a proper record, but we had all these fans, locally. We were actually pretty popular in the area. I borrowed three thousand dollars from my father, who didn’t have a lot of money. I said, “Dad, we have enough fans, and if we press a thousand records, I think we could sell them all!” So it was this live album, and we pressed up a thousand records, and we sold all of them. I took that money, paid him back, and then pressed up a thousand more and sold those. And then we made a thousand more and sold those. We sold the records, and he got his money back.

My dad saw that we were doing well. He saw that we would fill up clubs and how the fans were very passionate. We were selling a shitload of t-shirts. That’s how me and Ler [LaLonde] were making a living there for a while: we would print out all our own t-shirts and sell them for five bucks that day. Each show was a different t-shirt. We could get an extra hundred dollars or something per night. So, he saw that there was something going on, and I just gave him the numbers. And then when it was obvious that things were starting to take off for us in an underground way, he signed for a loan for us to get a motor-home, so we could tour the country. He’s very cool.

Before that, every time a record label would approach us, they’d say, “You know, do you guys ever think about getting a lead singer? You ever think of maybe combing your hair like the Guns N’ Roses guys?” It was always shit like that, so we were always like, “Fuck these people.” It was always a compromise. I was never big on compromises.

As a kid watching Chitty Chitty Bang Bang and all those Disney films, that shit was amazing, and it influenced my songwriting. I always listened a bit harder if there was a narrative. I was inspired by a lot of Johnny Cash and a lot of country music; there’s always a narrative to it, and I loved that feeling. It was always easier for me to write from the perspective of a character. It also came from the fact that I never really had confidence in my voice. I didn’t really gain confidence until the 2000s. Everyone would say, “ Here’s the singer for Primus.” And I would say, “No, I’m the narrator.” It was way easier for me to step into a character in the song, and I would just kind of put on a facade as I would go onstage. It is a little more difficult playing bass. You’re playing the rhythm and you’re singing the melody. There’s a contrast there that can be difficult sometimes.

Even my father used to say, “You know, I gotta tell ya, you can’t sing for shit, but you can sure play that bass!” He would say it right now if you were talking to him, I’m sure. In the beginning, I didn’t have confidence in my singing ability, but plenty of confidence as the character I created. I hated the way singers would try to sing my songs in other bands. It was awful. Singers can be a little precious sometimes, and it used to drive me insane. Perfection is boring. So I just did it myself.

One of the greatest compliments I ever received was when someone called me the Mel Blanc of music. I was so happy. When I first met Chuck D, he was laughing and said I sounded like Mr. Magoo. That was the greatest thing. I was so happy that he said that. 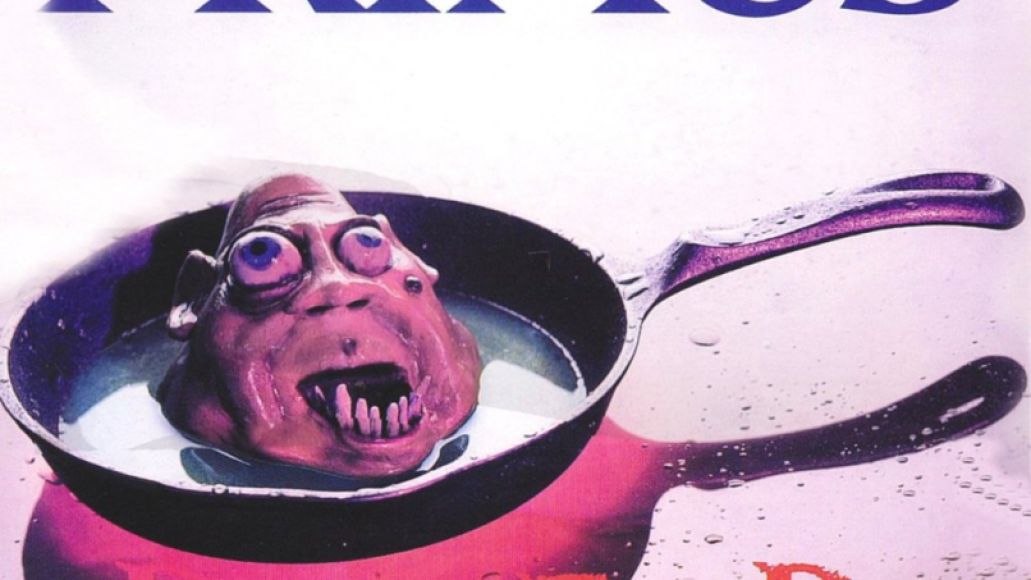 From album one, Primus was fueled by extreme musicianship and fused everything from funk to metal. One year after Suck on This, they revived some of those songs here. There’s a twitchy familiarity to the way in which Claypool sings, like he’s telling you a story on a front porch while a mutant parade marches by — or performing from the center of an interstellar mosh pit. The songs fuse idiosyncratic time signatures, slap bass, oddball narrative, and lots of groove. Many songs from this album remain fan favorites.

We made enough money off of Suck on This, and we went and recorded Frizzle Fry with that money before we ever went and signed with anybody. So, we had a record done before we even signed the deal to produce it, which was with Caroline Records. Between Suck on This and our first record, we went through eight drummers. My buddy Lonnie Marshall always said, “Drummer rhymes with bummer.” I can attest to that.

A lot of that material evolved through performing and jamming. We rehearsed three nights a week in our warehouse, which is now an IKEA or something. I was a carpenter, so I worked during the day and then blew off steam in the rehearsal space. With Todd Huth, I was looking for a guitar player. I knew him from high school, and when he called me saying he heard I was looking for a guitar player, I thought, “Oh no, not this guy.” I wanted some avant-Adrian Belew or Robert Fripp kind of guy, and he was kind of a freak. He had that very unique approach that was very compelling. Whether it’s film, literature, art, or music, I’ve always been intrigued by things that make me go, “How the fuck did that person think of that? Holy hell.”

We loved Frizzle Fry, and I still do. I’m not big on favorites, but that’s a favorite because it represents a very happy time when we were climbing up the ladder and doing amazing things, and because of the camaraderie in an RV cruising around the country. I mean, you always look back at old records and go, “What the hell was I thinking? Why does my bass sound like that? Why does my vocal have that reverb on it? But then time goes by and you listen to it again, and you go, “Holy shit, that actually sounds pretty cool.” It’s like your high school haircut: it kinda goes in and out with you.

“John the Fisherman” was written so long ago. I like to write about things I know about so that I don’t sound like a dipshit talking over my head. I fish. Some dads take their kids to football games or baseball games. My dad took me fishing. That’s what we did, almost every weekend. My uncle, my grandfather, that’s what we did. It’s a big part of my history. So, for me, it was always easy to write about. These fishing songs kept popping up, themes about the ocean, and it made it like a chronicle, a subdivision of our body of work. “Too Many Puppies” was the very first song I wrote for the band back when we were known as Primate. I didn’t even really have a band then. It was just me with a tape recorder and a LinnDrum. My roommate was dating the preacher’s daughter, and he gave me the keys to the church. I went across the street to the church and sang the vocals into this tape recorder. I couldn’t do it in the apartment; I felt like an idiot.