Marilyn Manson revealed dates for his upcoming North American tour back in July, hinting that his follow-up to 2015’s The Pale Emperor was finally imminent. Originally entitled SAY10, the album was initially supposed to be released this past Valentine’s Day, but was delayed so Manson could finish a few more tracks. Now entitled Heaven Upside Down, the record has officially been announced for an October 6th due date via Loma Vista Recordings.

The 10-track LP reunites Manson with Pale Emperor composer/producer Tyler Bates. While the “cinematic sonic palate” may sound as if Manson is revisiting early work like Portrait of an American Family and Holy Wood, that’s more the result of a shifting attitude than a concerted nostalgic effort. In a new interview with Consequence of Sound’s Bryce Segall set for publication next month, Manson says, “I didn’t try to return to a sound I had before, but I definitely have the attitude I had before. This record doesn’t have a persona or character. It lives within me having the same enthusiasm, same fire, and the same intent and reckless abandon.”

Manson also reveals how some of that enthusasiam came from a very unlikely source: Rihanna. He explains,

“Strangely enough, one of the records that influenced this album strongly, and it can’t be taken literally, is Rihanna, her last record. That one song, ‘Love On The Brain’, it really hit me because I saw her perform it and she just… meant it. And I think that’s maybe what rappers like about me. They see it as being sincere and real, and I think thats a part of rap culture, as it was a part of punk rock and real rock or whatever you wanna call anything. You can tell when something is being forced and trying to be something it isn’t. It’s not about how many tattoos you have or if you say fuck enough in a song, it’s in the way you say it. It’s the way you live your life.”

As a first listen to that aggressive sincerity, Manson has shared the lead single from Heaven Upside Down, “WE KNOW WHERE YOU FUCKING LIVE”. Take a listen below.

Pre-orders for Heaven Upside Down are going on now via Loma Vista and digital retailers like iTunes. Find the album artwork and tracklist ahead. 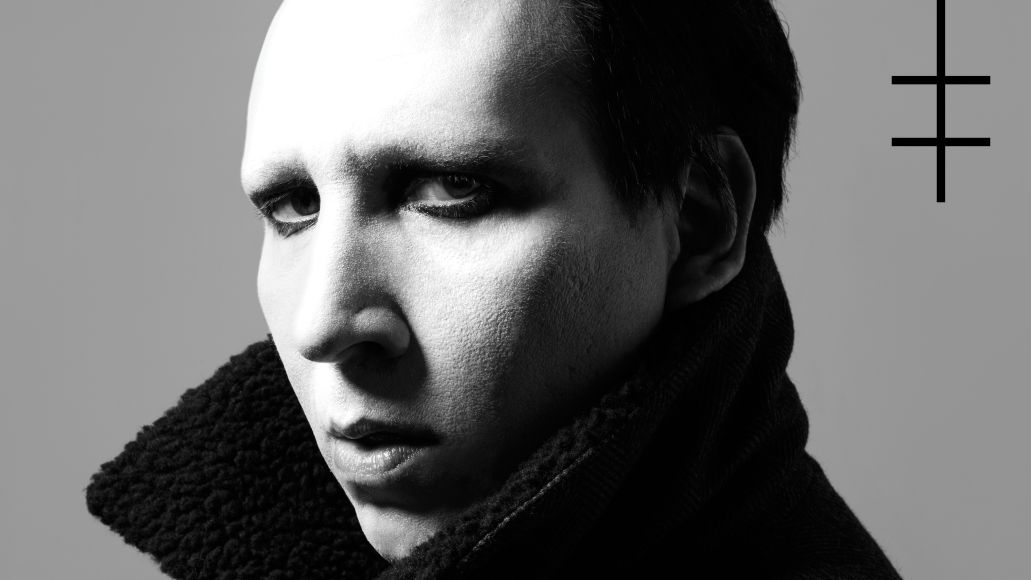 Taking inspiration from Rihanna isn’t Manson’s only brush with hip-hop lately. As he tells Consequence of Sound, he and Bates are gearing up to work on the new album from rising Philadelphia rapper Lil Uzi Vert.  “He wants to do a rock album next, and I would love to see that happen because I think that he could make a new thing,” Manson explains. “Not some rock/rap type of thing, something special and new that I think needs to be created just to fuck the world up more.”

The shock rocker already has a few ideas of the direction he hopes to take the record. “I think that if I had to pick what Lil Uzi Vert should be, if he’s involved in rock, it’s an early Bad Brains or Faith No More, but with a catchier element. I think he has punk rock in him. He’s a lil crazy motherfucker. And good. Smart as fuck. He has an attitude like I did, and I like that about him.”

Keep your eyes out for our full interview with Manson this October to learn more about Heaven Upside Down and where he plans to go next. You can also revisit the previous single (and original title track), “SAY10”.