Newly formed rock group Paradise found its origins at a bar in Oslo where guitarist Rob McVey (Marianne Faithfull, Longview) first bonded with Sivert Høyem, former vocalist of the Norwegian alternative outfit Madrugada. The pair discovered a shared interest in “the immediacy of explosive performance” and went on to form the project to deliver “straight up rock” inspired by underground guitar groups from the mid-90s.

To round out the collective, the duo brought in PJ Harvey’s drummer and arranger Rob Ellis alongside bassist Simone Butler (Primal Scream) prior to starting work on their debut self-titled EP. After writing the songs within a mere week, Paradise recorded the tracks live to tape at Monnow Valley Studios with producer John Agnello (Dinosaur Jr, Sonic Youth, and Kurt Vile).

Ahead of the EP’s release on October 27th,  Paradise has shared the defiant lead single, “Goodbye 21st Century”. The track’s purpose is to shake listeners from their “digital dreams” by providing hammering guitars and charging percussion, call coming together for a defiant drive of a song. Accordingly, the lyrics contain cynical lines such as, “It’s all over the news/ It’s all over your face too/ It’s true the pigs are claiming it back/ It’s true orange is the new black.” Hear it below.

Sivert Høyem: We thought our song needed one more part, sort of a tag on at the end, a real melodic climax. After one of our first rehearsal days in London, the week Simone joined the band, me and Rob McVey stayed behind with a six pack of Stella. I find good ideas often come after rehearsals, when you’re warmed up, so it might be worth it to soldier on for a little longer. Rob came up with the melody and the first lines for the end bit, while I was pretending to play the drums. It all came together very quickly after that, it was a case of filling in the blanks. I remember the R.E.M. song being mentioned, we were going for that jubilant yet apocalyptic vibe. This was between Brexit and Trump, there was a real sense of “what the fuck is happening.” There was no way that wasn’t going to be reflected in our music.

Rob McVey: I could hear where Sivert was coming from, somewhat reflective, disillusioned, angry, but honest. The song had this beautiful optimism and I wanted to put my finger on it; that’s when I came up with the “Goodbye 21st Century” line… Still don’t really know why it came into my head.

Sivert Høyem: This is an obvious one. Sonic Youth seem to utilize a lot of weird tunings with open droning strings; “Goodby 21st Century” has a similar approach on the guitar. Some time ago I came up with a special tuning for one of my solo songs, and I was curious if there might not be one more song in it. The song evolved from a simple demo I had made. As soon as Rob McVey got his hands on it the guitar part became a lot more structured, owing more perhaps to Peter Buck or the Byrds than Thurston Moore. There are harmonics in there that I could never have conceived of. Incidentally John Agnello, who also worked on many Sonic Youth albums, produced our EP. I love Sonic Youth when they’re tuneful and anthemic — Paradise are way more anthemic though.

Rob McVey: I was never the same after Sonic Youth and MTV. I mean it’s the guitar feedback, I love that wall-to-wall soundscape — I tried to mix that up with Smiths/Byrds/Tom Petty to get the sound on “21st Century”.

The art of Daniel Richter:

Sivert: Rob Ellis was producing a band in Copenhagen and went to see a big Daniel Richter retrospective while he was there. Directly after that the band got together in Oslo to write and rehearse. Ellis was all fired up about Richter — his art could be a visual companion to the music we would make as Paradise. His paintings seem to tell the truth about modern life in a way that is very rich and colourful, very real and enigmatic at the same time. There’s a directness to it that’s undeniably punk, yet his paintings reference 19th Century romantics as well. It is all very Paradise.

Rob McVey: Ellis was into the notion of reflecting what Richter was doing on canvas with the sound a of simple 4 piece rock band. We were e-mailing between rehearsals and Rob summed it up like this: “Paradise could be taken both ironically to reflect the times or wholesale as an escape from the times, i.e. both engagement and escape in tandem. The medium is the luxuriant sound of rock music and all its visceral joys and the message is resistance, anger, but also empathy with those who need it. The idea of decay is always under the surface of Paradise. The luxuriant canopy of a jungle is born of rot and decay.”

Bob Dylan — “The Times They Are A-Changin'”:

Rob McVey: I’ve often marvelled at the lyrics of this Dylan song, managing to sweep up the atmosphere of a particular time whilst remaining on the periphery. I loved the way Dylan dismantles the established and critical so effortlessly, and it made me feel cool at the same time. I guess in our song I liked the way Sivert was just saying what he was seeing. “21st Century” was the first time I had felt comfortable addressing what was going on out there, just felt right and of the moment.

Paradise’s self-titled debut EP is out September 29th via Clouds Hill. American painter Malcolm Liepke granted the group permission to use his painting, delicious morsel, for the cover art. Check it out below. 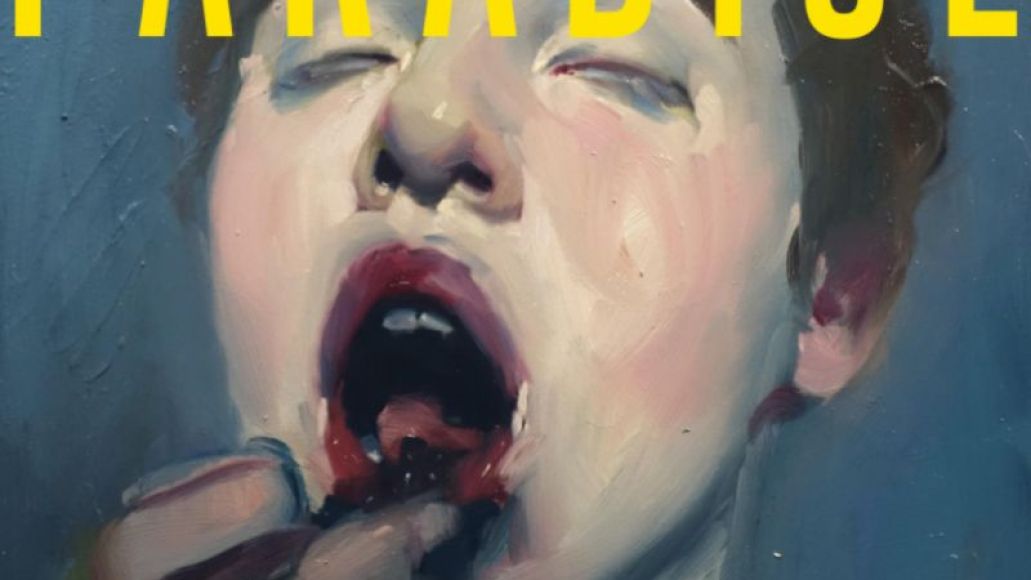 Paradise will embark on a European tour in support of their self-titled debut. Find the complete itinerary below.