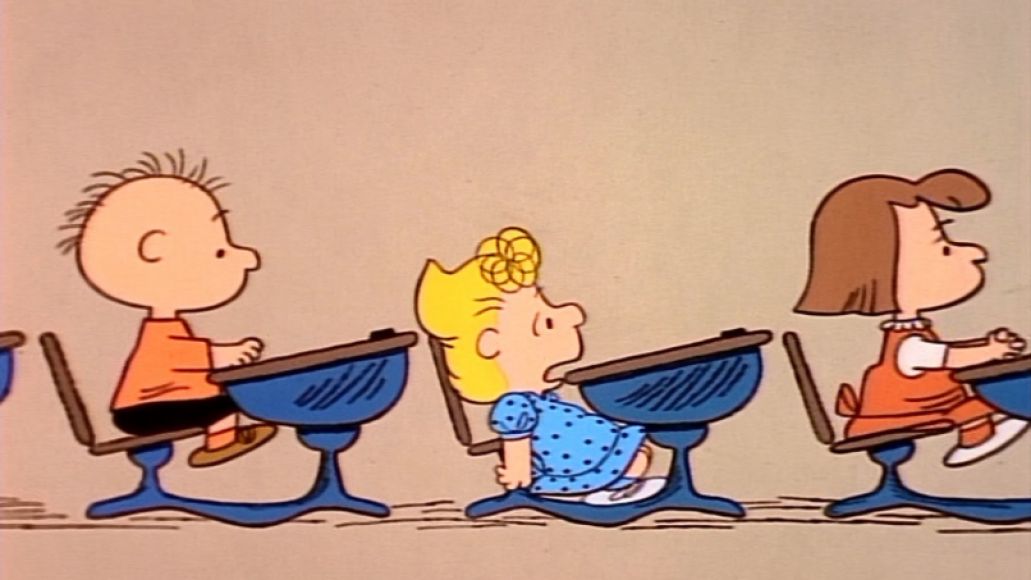 Memorable Lesson: “So be true to your school now/ Just like you would to your girl or guy”

Reading Comprehension: It’s a timeless idea, no? Look beyond the dickhead teachers in the past, and instead think back to the times where you scored through the atmosphere on something you slaved over for days and nights, or frame the fragile moments in between: The love-fueled paper planes to the head of your all-time crush, the downright rotten concoctions at the lunch table that your best friend was paid five quarters to eat, or the two or three minutes you spent talking to your teacher when everyone else already cleared out of the classroom. Okay, so school’s something worth championing.

Take Notes: The song’s rallying cheer is an ode to Hawthorne High School in California, where Al Jardine and the Wilson brothers attended.

02. Paul Simon – “Me and Julio Down by the Schoolyard”

Memorable Lesson: “I’m on my way, I’m taking my time/ But I don’t know where”

Reading Comprehension: It’s unreal how much we take advantage of time as a youngster. Yet, in hindsight, there’s something comforting and enviable about not knowing what’s going on and leaving that up to the elders — no matter how insane or chaotic or untrustworthy they may actually be.

Take Notes: Not even Simon knows what “Mama saw,” as he told Rolling Stone’s Jon Landau in 1972: “I have no idea what it is… Something sexual is what I imagine, but when I say ‘something,’ I never bothered to figure out what it was. Didn’t make any difference to me.”

Memorable Lesson: “How I wish for school days/ How we used to run and play, oh baby”


Reading Comprehension: “You can’t truly appreciate something until it’s gone.” I think that goes for just about everything as a budding adolescent. Those slower, carefree days on the playground are probably one of the few times in life where you’re actually supposed to do nothing but have fun. Don’t even get me started on how some days included both P.E. and recess. Who’s feeling nostalgic now?

Take Notes: Originally on Green’s 1974 semi-flop, Al Green Explores Your Mind, this particular track found some life by sharing a 45″ with the album’s only hit: “Sha-La-La (Make Me Happy)”.

Memorable Lesson: “Back to school and I hate it there/ Everything I want I gotta wait a year”

Reading Comprehension: Summer used to hold so much weight in our lives. It still does, but it’s just not the same. Those three months used to mean one thing: freedom. Now, they’re just three months where we sweat in our business attire and occasionally take a “cabin trip with old college friends.” Try and think back to the slow burn of your first day of school, how you almost felt like welling up with tears once August died down. In hindsight, it’s quite possible our excitement for school waned following our first experience with summer. That’s a real bummer for first grade teachers everywhere.

Memorable Lesson: “Love is like a flame/ It burns you when it’s hot”

Reading Comprehension: Heartbreak starts young, and it’s that first crack that stings the most — even if it’s a “stupid crush” on a “stupid girl” or a “stupid boy.” Nothing mends the wounds, and it’s something that sticks with you forever. But it’s one of the more important lessons in life to experience, learn, and move on from.

Take Notes: Nazareth took this one to the top of the charts, but it was The Everly Brothers who first recorded it. Other artists who’ve made it their own: Roy Orbison, Emmylou Harris, and Jim Capaldi.

Memorable Lesson: “Do something pretty while you can”

Reading Comprehension: One needs to have courage to be oneself. School isn’t the most ideal setting for this, but it’s the only one that really counts as a kid. There’s a window of opportunity for everyone that’s open early on, when put-downs or criticism are still alien. “Kids say the darndest things,” Cosby used to preach, but really, kids know no other way. But because they’re so new to everything, there’s an element of spiritual freedom that carves out each and every kid’s identity. That’s a valuable lesson appreciated far too late.

Take Notes: Songwriter Stuart Murdoch found public appreciation in music as a DJ at the University of Glasgow throughout the ’80s. He did rule the school.

Memorable Lesson: “I’m a son of a bitch at my school”

Reading Comprehension: Sometimes harnessing that spiritual identity brings out the worst in someone. There’s a reason every class has a bully or an outcast. Some kids find their calling in the worst places, but sometimes those places just aren’t appreciated by enough people. Truth: Just because someone preferred the back row of the classroom doesn’t mean they weren’t scoring A’s.

Take Notes: This ratty ode about having “sex with the nuns” or taking a “plane to Colombia” was weird enough to be excluded from any of the Pixies’ studio albums.

Reading Comprehension: Unless you’re a patron saint or just really moral, you probably picked on someone during grade school, perhaps in passing or among friends at the library or the lunch table. Depending on how that went down, it’s likely haunted you from time to time. These attic thoughts climb down in the late hours of night, when the mind wanders and you start thinking, for no reason at all, “I wonder what ever happened to…”, and that’s when the guilt keeps you up even later.

Take Notes: The song’s an ode to 15-year-old Jeremy Wade Delle, who killed himself in front of his classmates on January 8, 1991, at Richardson High School in Richardson, TX. Frontman Eddie Vedder felt “the need to take that small article and make something of it — to give that action, to give it reaction, to give it more importance.”

Memorable Lesson: “Bones are bones my friend/ And you won’t find flags/ In a million years/ In the fossil record”

Reading Comprehension: The illusion that school is this grand, ol’ place washes away over the years, especially as one races toward their 10th birthday. You’re not a teenager yet, but you’re aware enough to discern between what’s real and what isn’t. When the fabric of the institution starts to disintegrate, that’s when one learns to be cynical, or what we thought of as “keepin’ it real.”

Take Notes: The album cover for Why?’s 2003 LP, Oaklandazulasylum, features a boy floating face down in a shallow pool. Is that not a fitting image?

10. The Decemberists – “The Sporting Life”

Memorable Lesson: “So far I had known no humiliation/ In front of my friends and close relations”

Reading Comprehension: “First comes love, then comes utter humiliation” is how the limerick should really go. Save for the pain of one’s first heartbreak, there’s nothing more damning and painful than losing face in front of everyone, especially those closest to you. As one grows older, disappointment becomes commonplace, but that initial sting is so confounding. And really, while everyone’s quick to applaud success, everyone’s equally prone to stare, point, and laugh at failure.

Take Notes: Sporting Life was once a weekly American newspaper that highlighted sports like baseball or trap shooting. It ran from 1883 to 1917, with another short run from 1922 to 1924.