Ever since the Dixie Chicks essentially scuttled their career by speaking out against George W. Bush in 2003, country artists have skewed heavily away from discussing politics. However, since the tragic massacre at a country music festival in Las Vegas last month, it’s become harder to keep the genre out of political discussion. Even so, the Country Music Association attempted to draw a hard line with reporters at the upcoming CMA Awards when they issued guidelines banning journalists from asking certain questions.

According to the guidelines, first posted by Nashville Scene, any journalist asking about “the Las Vegas tragedy, gun rights, political affiliations or topics of the like” could see their credentials “reviewed and potentially revoked via security escort.” Read the relevant text from the guidelines below. 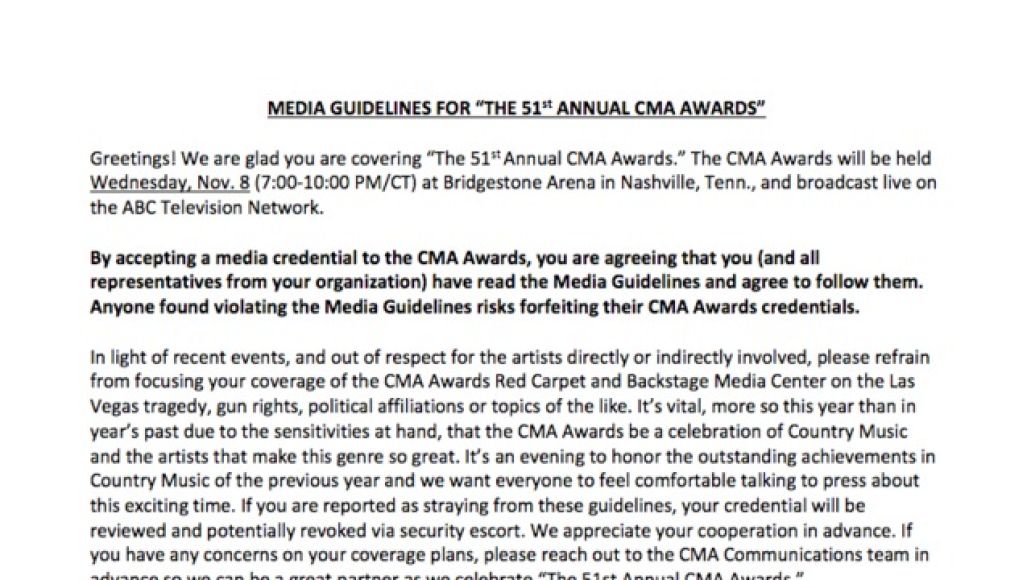 This blatant attempt to divert the national conversation has been met with derision from many in the industry. Brad Paisley, who has co-hosted the ceremony with Carrie Underwood since 2008, called on the CMA to change the rule:

I'm sure the CMA will do the right thing and rescind these ridiculous and unfair press guidelines. In 3…2….1…..

Margo Price, who previously called for stricter gun control following the Vegas shooting, had this to say:

Maren Morris, who’s nominated for a pair of awards and is scheduled to perform, also voiced her disappointment in the policy:

Country music has always been about the truth. Out of respect for the Las Vegas victims, let’s keep it that way.

Even Ryan Adams took a tweeted shot at the CMA Awards:

All the backlash was apparently noticed by the CMA, as they’ve since revoked the guidelines and issued an apology. “CMA apologizes for the recently distributed restrictions in the CMA Awards media guidelines, which have been lifted,” read the short statement. “The sentiment was not to infringe and was created with the best of intentions to honor and celebrate Country Music.”

The CMA Awards will be held at Nashville’s Bridgestone Arena on November 8th. The show will be aired live on ABC at 8 pm EST/7 pm CT.