For many people, their first exposure to Frances McDormand was Fargo (1996), where she showcases the depths of her range as an actress in a role that, played by almost anyone else, wouldn’t have been nearly as memorable. Try it and see if you can imagine Nicole Kidman or Angelina Jolie saying the line “What do we got here, Arby’s?” In this pivotal film, for which she won an Oscar for Best Actress, McDormand jumps both hands and feet first into Joel and Ethan Coen’s dark, and often hilarious, depiction of a series of bumble-footed crimes in snowy Minnesota. Playing the very pregnant police chief Marge Gunderson, who finds herself Arby’s deep in a homicide investigation, McDormand fills every scene she’s in with the kind of seemingly effortless humor, tangible concern, and perfectly timed tension that hundreds of thousands of actors worldwide are, at this very moment, running themselves ragged hoping to replicate.

By the time Fargo came out in 1996, McDormand had already appeared in 16 films, the first of which, Blood Simple (1984), was also written and directed by Joel and Ethan Coen. For this one, she plays a character named Abby who’s caught up in a deadly bad marriage. While we’re on the subject of marriage, it’s a good time to point out that McDormand and Joel Coen are themselves married, to each other, and have been since 1984. This, by Hollywood standards, is a damn miracle. Aside from the previously mentioned Fargo and Blood Simple, McDormand and the Coen clan have collaborated on Raising Arizona (1987), The Man Who Wasn’t There (2001), Burn After Reading (2008), and Hail, Caesar! (2016). Many of these will most assuredly pop up later on as we discuss what we believe to be her 10 best roles.

The Chicago-born, New York-planted actress can, and should, be heralded as a shining example of how to not only navigate the film industry, but life itself (based on what Google knows of her) with the kind of style, grace, and talent that leads by example, showing that it is possible, nay encouraged, to be successful in the film industry while also giving nary a feck about the untold years of Hollywood nonsense (namely when it comes to beauty and age pressures) heaped upon women in an unending deluge. And while her name may not always be at the tip of your brain while searching for a movie to stream, it 100% should be. Make note of these examples why, and then catch her latest, Three Billboards Outside Ebbing, Missouri, when it comes out this Friday.

McDormand plays an unseen, uncredited voice at the beginning of Barton Fink (1991), which is just kind of fun to think about. Her voice is unmistakable and emotes so much, in such a short amount of time, that having it kick off this dark classic is too perfect to not mention. 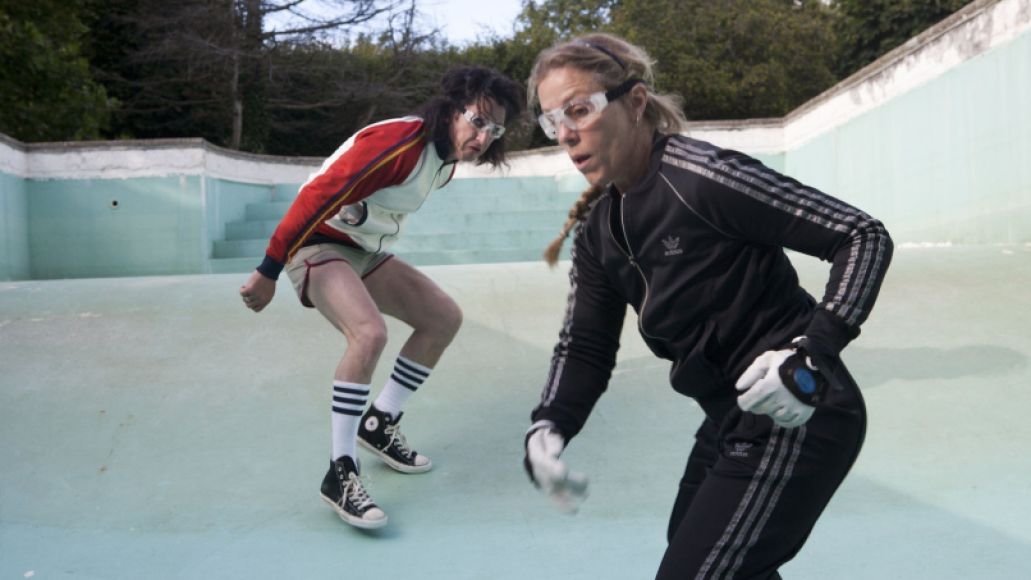 This movie kind of came and went, but the whole idea of it is fascinating. The plot revolves around an aged rock star named Cheyenne (played by Sean Penn channeling Robert Smith) who goes to New York to reconcile with his dying father, but doesn’t quite get the chance to make that reconciliation happen. McDormand plays his wife, Jane, who works as a firefighter and doesn’t seem to mind that her husband is basically the only tether of normalcy in Cheyenne’s life. Nothing about this movie should work, but it does, and as is so often the case, McDormand is the glue that binds it all together. 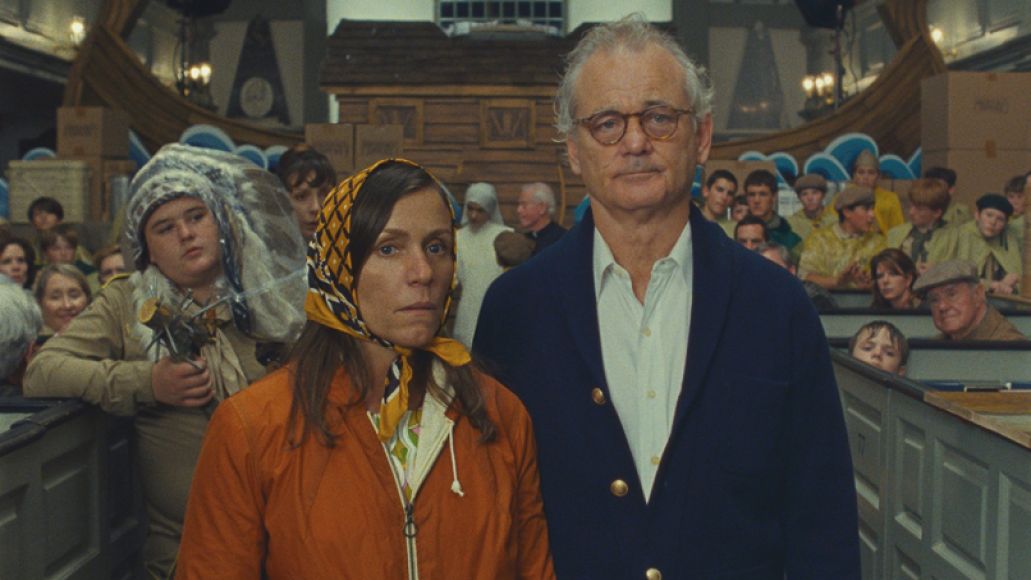 In what perfect world do we deserve a movie that combines McDormand, Bill Murray, and Wes Anderson? Here McDormand plays Mrs. Bishop, wife to Murray’s Mr. Bishop, whose daughter Suzy runs away from home to live out her ultimate twee fantasies. There’s a lot of yelling through bullhorns and shared freak-outs with Murray on McDormand’s part and the whole thing is just fantastic. Pretty sure this movie cures cramps and headaches better than Ibuprofen. McDormand and Murray paired again for the HBO mini-series Olive Kitteridge, and their chemistry, both in Moonrise Kingdom, as well as here, seems effortless. 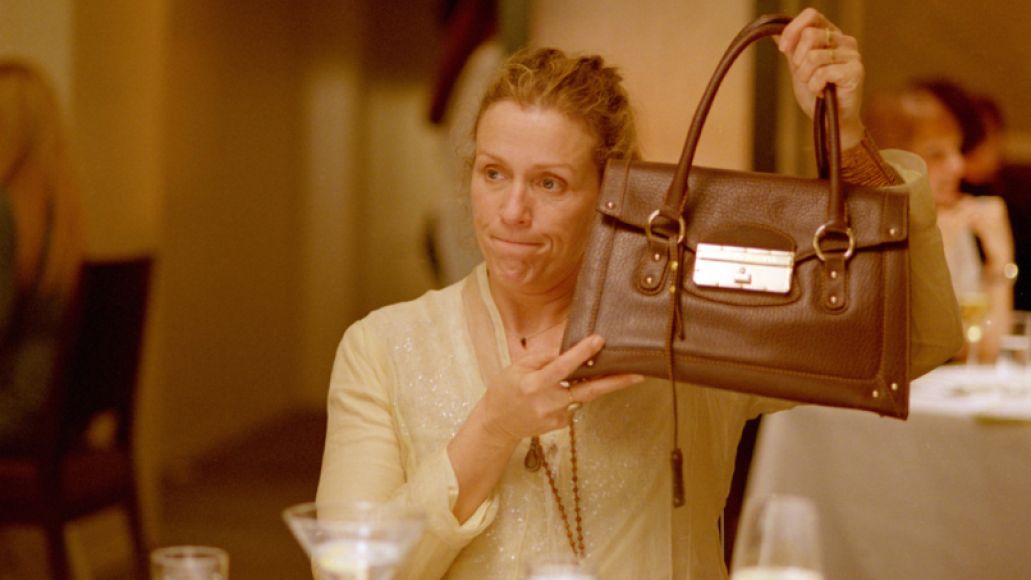 This is kind of McDormand’s Steel Magnolias. Friends with Money (2006), a buddy movie also starring Jennifer Aniston, Catherine Keener, and Joan Cusack, has McDormand stealing the show as Jane, a fashion designer who’s married to a guy who might be gay. It’s rare to see her play straight-up salty, which this character very much is, so that makes it extra special. Although this one was kind of a sleeper after debuting at the Sundance Film Festival in 2006 and then hitting theaters quietly in a limited run, McDormand did come away with the Best Supporting Female award at the 2006 Independent Spirit Awards. Even a movie that’s just kind of whatever will tally up awards for McDormand. That’s skill. 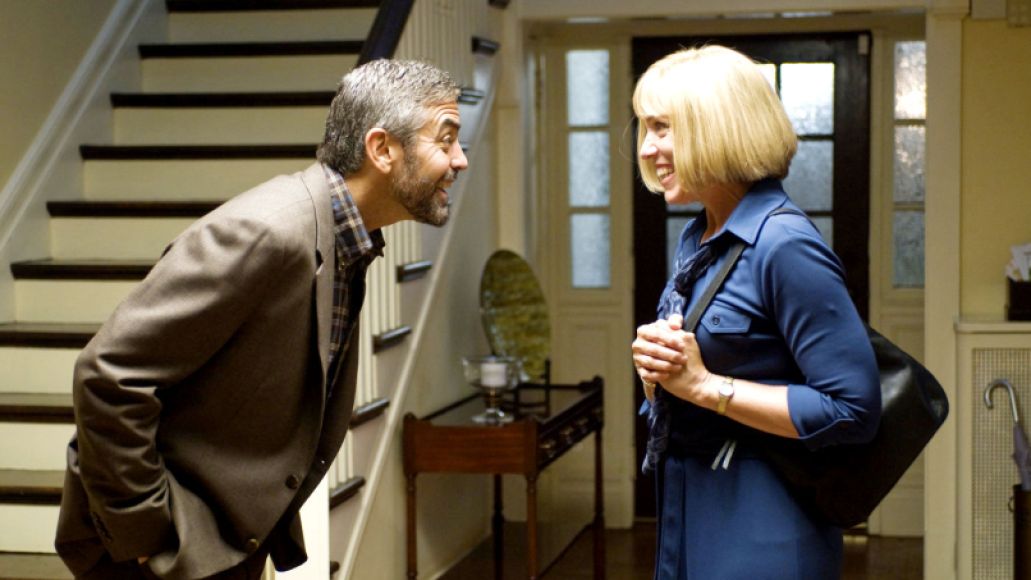 The Coen brothers are so good at rounding up the most unlikely combination of actors and have the end result flow so perfectly. In Burn After Reading, McDormand joins George Clooney, John Malkovich, Brad Pitt, and Tilda Swinton in a goofy but highly enjoyable crime caper that kicks off when top-secret government intel is discovered on a CD accidentally left behind at a local gym called Hardbodies. McDormand plays Linda Litzke, an employee of Hardbodies, who, along with her co-worker Chad (Brad Pitt), attempts to sell the info to the Russian Embassy, so she can get plastic surgery. This is probably one of McDormand’s more over-the-top performances, but it’s still so fun to watch and the movie would be one-third as good without her in it.

City by the Sea (2002) didn’t get the best reviews, but it’s still a treat to see McDormand act alongside Robert De Niro (her love interest in the film), James Franco, and Eliza Dushku (AKA, Faith from Buffy the Vampire Slayer). The plot of the film revolves around De Niro’s character, Vincent LaMarca, a NYC detective who comes to find that his son Joey (James Franco) is a drug addict and a killer. McDormand plays Michelle, Vincent’s girlfriend, who spends most of the movie trying to convince him to ditch his deadbeat son. This is a great one to watch on a lazy Sunday if you’re in the mood for some quality action that looks like it was made in the ’80s but wasn’t. McDormand in a dramatic role such as this one, and the one mentioned before it, grabs you and never lets go. There’s something in her delivery that is so subtle her actions are impossible to get steps ahead of, which is both extremely rare and extremely welcome in cinema. 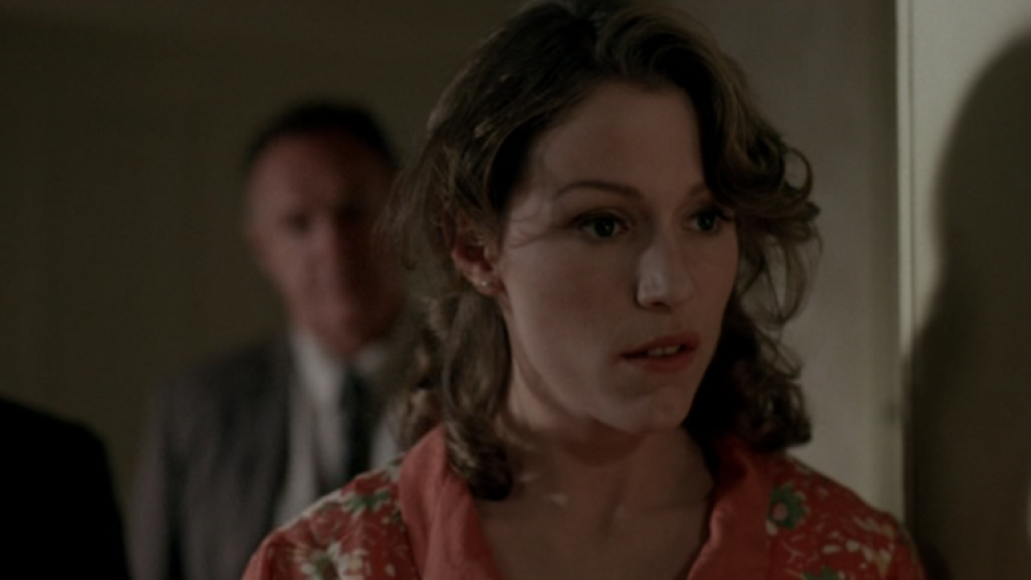 McDormand can do drama just as well as she can do comedy and oftentimes all within the same movie. This is not one of those examples. Mississippi Burning (1988) is about rampant racism in the south and was inspired by Mississippi’s 1964 Chaney, Goodman, and Schwerner murder case. McDormand plays a character named Mrs. Pell, the wife of the town’s Deputy Sheriff (Brad Dourif) and alerts the FBI that her husband, along with other local law enforcement, murdered three men because they’d been organizing a way for African Americans to have a voter registry in the town. McDormand was nominated for Best Supporting Actress during that year’s Oscars but lost out to Geena Davis for her role in The Accidental Tourist. 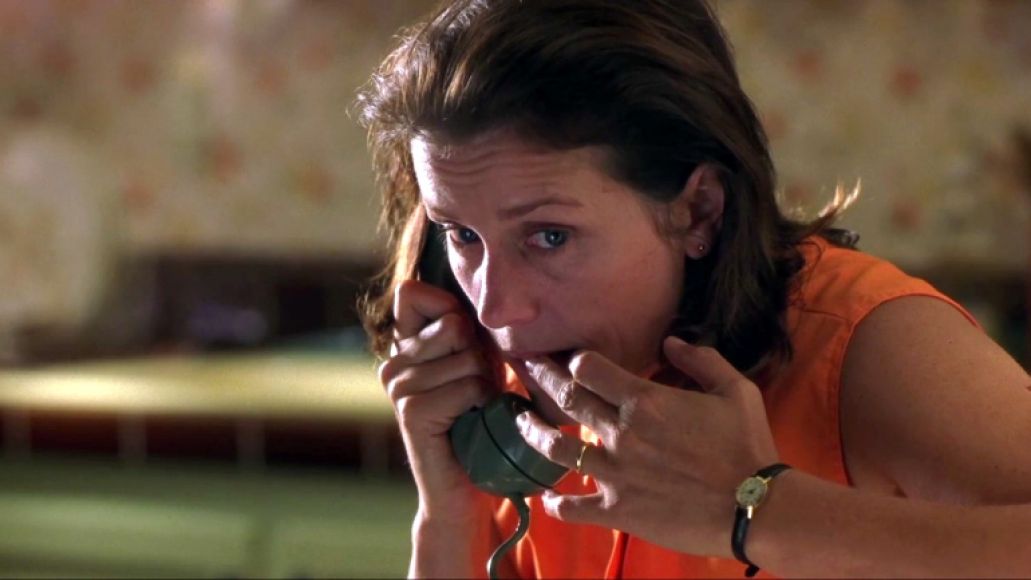 Every so often a movie will come out that speaks to a certain demo so perfectly that it’s just a given it will become a cult classic. Almost Famous is far from an indie film, sure. It was directed by Cameron Crowe (Fast Times at Ridgemont High, Say Anything, Jerry Maguire) and has a star-studded cast (Billy Crudup, Kate Hudson, Zooey Deschanel, Philip Seymour Hoffman). But the film is about two pretty specific things at its core: rock music and rock journalism. So, basically, if you can scan your room/apartment/house/basement right now and tally up a vinyl collection, a few band bios on the book shelf and, well, a laptop, this movie is probably one of your favorites to this day. McDormand plays Elaine Miller, mom of main character William (Patrick Fugit) and gifted us with an array of funny, shout-able quotes like “don’t do drugs!” 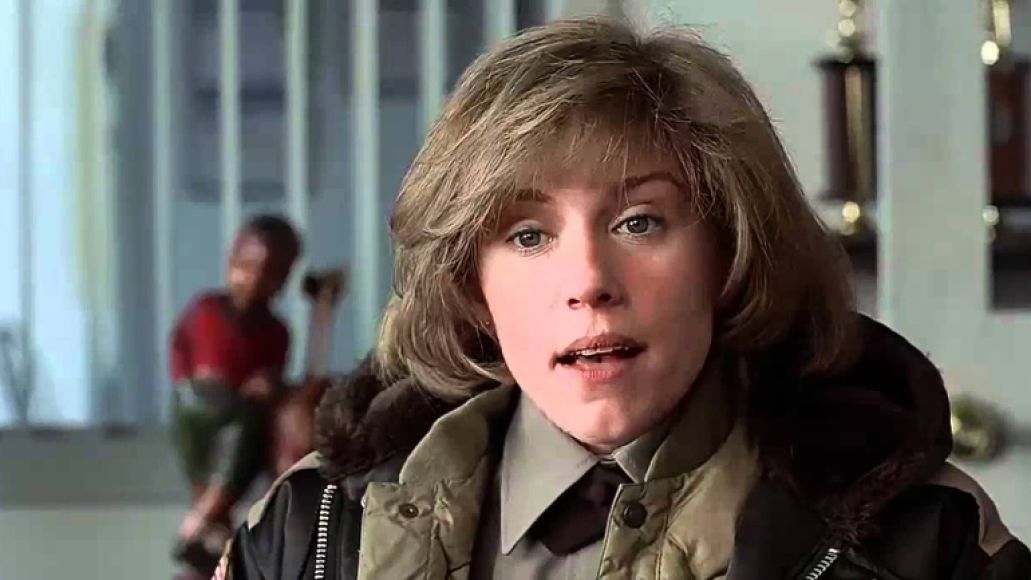 As we discussed in the introduction, McDormand’s role as Marge Gunderson in this Coen brothers classic not only landed her an Oscar, but has stood the test of time as her most celebrated character. Accepting her award for Best Actress, presented to her by Nicolas Cage, McDormand literally strutted across the stage and thanked producers for allowing directors to cast actors based on qualifications and not just market value. The decision to base a whole film around a pregnant woman who is the chief of police in a small town in Minnesota was risky in 1996 and would still be risky today. The Coens must have known that risky bets pay off the best because they doubled down by casting McDormand, and the end result is worth a million bucks. You betcha. 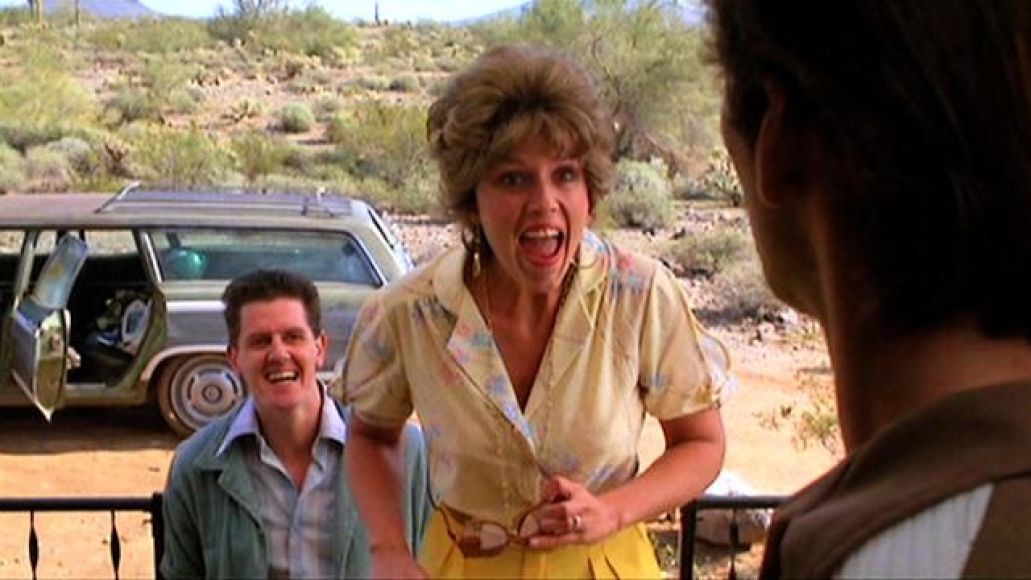 Raising Arizona could very well be considered the crown jewel of the Coen brother’s body of work. Although McDormand plays only a bit part in it, she stands out amongst one of the best ensemble casts to be projected on screen in film history. No, that’s not hyperbole; that’s just a fact. When you line up everyone who’s in this movie: Nicolas Cage, Holly Hunter, John Goodman, Sam McMurray, and then add in Frances McDormand, the script hardly even matters because anything these people do is the perfect combo of nuts and captivating. Playing a character named Dot who’s the wife of Hi McDunnough’s (Cage) wife-swapping boss (McMurray), she’s impossible to turn away from and somehow manages to grab laughs just by widening her eyes, which is kind of a signature McDormand move.