Today, R.E.M. marks the 25th anniversary of their massively successful eighth studio album, Automatic for the People, with a deluxe reissue. It’s the latest in a series of archival releases from the legendary Athens, GA band that has seen Michael Stipe and company offer up anniversary reissues for each record leading up to Automatic.

The Automatic re-release features the record freshly mixed by original producer Scott Litt and engineer Clif Norrellin in the brand new Dolby Atmos format. This is the first time Atmos has been used to mix commercially available music, and the new tech promises to “[transport] the listener inside the recording studio with multi-dimensional audio.” The four-disc Deluxe Edition includes a bonus disc of 20 never-before-heard demos from the recording session, including the previously shared mythical lost track “Devil Rides Backwards” and the unreleased recording “Mike’s Pop Song”.

(Read: Ranking Every R.E.M. Album From Worst To Best)

Both the standard reissue and deluxe version include Live at the 40 Watt Club 11/19/92, an audio recording of the band’s only show in 1992. The deluxe edition comes with a fourth disc that features both mixes of Automatic, as well as a Blu-ray disc featuring all the videos from the period, including a special, extended version of the “Nightswimming” video and an accompanying making-of documentary. The whole affair comes packaged in a lift-top box that includes a 60-page book with never-before-seen photographs by Anton Corbjin and Melodie McDaniel, as well as new liner notes written by Scottish music journalist Tom Doyle.

Although R.E.M. wanted to make Automatic a more rock-centric affair than their previous effort, Out of Time, when more morose material began to emerge, the band didn’t fight the inspiration and dove head first into themes of morality and the pitfalls of fame. In his review of the reissue, our own Dan Weiss writes,

“Yet the project that was simply called Star at the time wasn’t like any morose album before it. For one thing, rumors circulating that Stipe was stricken with AIDS added a veneer of how being a celebrity means losing control of your truth, even in death. Songs like ‘Monty Got a Raw Deal’ and ‘Man on the Moon’ concerned fallen stars Montgomery Clift and Andy Kaufman, respectively, who both lived unsettled Hollywood lives and declined in health under bizarre circumstances… It’s so rare that four white dudes selling 18 million units knew the limits of their powers; lord knows Bono didn’t.”

You can order the package here, and stream it down below. Scroll down a bit farther for a pic of all the deluxe goodness and the massive tracklist. 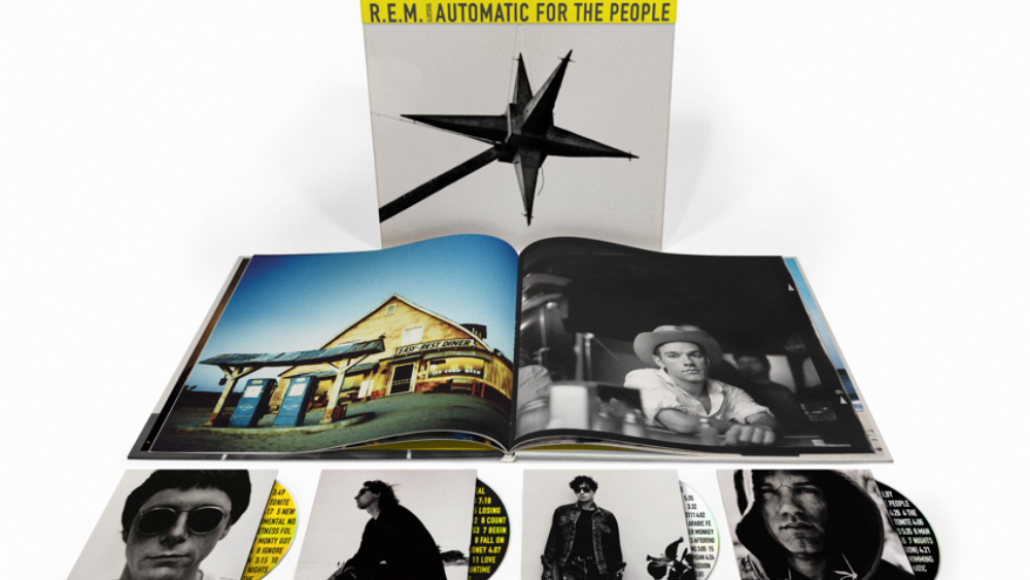 Automatic for the People 25th Anniversary Deluxe Edition Reissue Tracklist:
Disc 1 — Automatic for the People
01. Drive
02. Try Not to Breathe
03. The Sidewinder Sleeps Tonite
04. Everybody Hurts
05. New Orleans Instrumental No. 1
06. Sweetness Follows
07. Monty Got A Raw Deal
08. Ignoreland
09. Star Me Kitten
10. Man on the Moon
11. Nightswimming
12. Find the River

R.E.M. reissue Automatic for the People for its 25th anniversary: Stream/Download