Star Wars has always drawn a connection between the Empire and the Nazis. From the very beginning, the franchise presented images of Grand Moff Tarkin and his officers, replete with enforcers dubbed “stormtroopers,” wearing uniforms that likened them to the men who served Hitler. It’s a visual choice that’s meant to tell the audience who the Empire is at a single glance, without needing to unpack the details that the franchise would explore in the ensuing decades.

So there’s a particular resonance for Jews like myself when Star Wars Rebels – the canonical TV series set in the years before A New Hope – delivers an episode like “Legends of the Lasat”, where one of the show’s characters grapples with the fact that the Empire wiped out his people. That character, Garazeb Orrelios (or “Zeb” for short) is a Lasat, an alien species based on Star Wars conceptual designer Ralph McQuarrie’s original concept art for Chewbacca. He’s part of a ragtag group of misfits who are fighting the good fight at the earliest stages of the rebellion, years before Luke Skywalker would blow up The Death Star.

Zeb believes himself to be the last of his species. The rest of the Lasat perished in the Empire’s assault on his homeworld, an event that has haunted Zeb throughout the series. But in “Legends”, he unexpectedly encounters Chava and Gron, a pair of elderly Lasat survivors, who are seeking out the long-prophesied new home for their species. And Zeb’s world is suddenly thrown into disarray.

While initially overcome by his impulse to protect and defend Chava and Gron from their Imperial captors, Zeb quickly begins to bristle at their presence. The pair are fiercely committed to finding Lira San, a planet foretold by ancient legend as a place of safety, one that supposedly promises to offer new life for the Lasat. But Zeb remains skeptical of the prophecy and, after all he’s been through, doubts that there’s even a real future for his people. 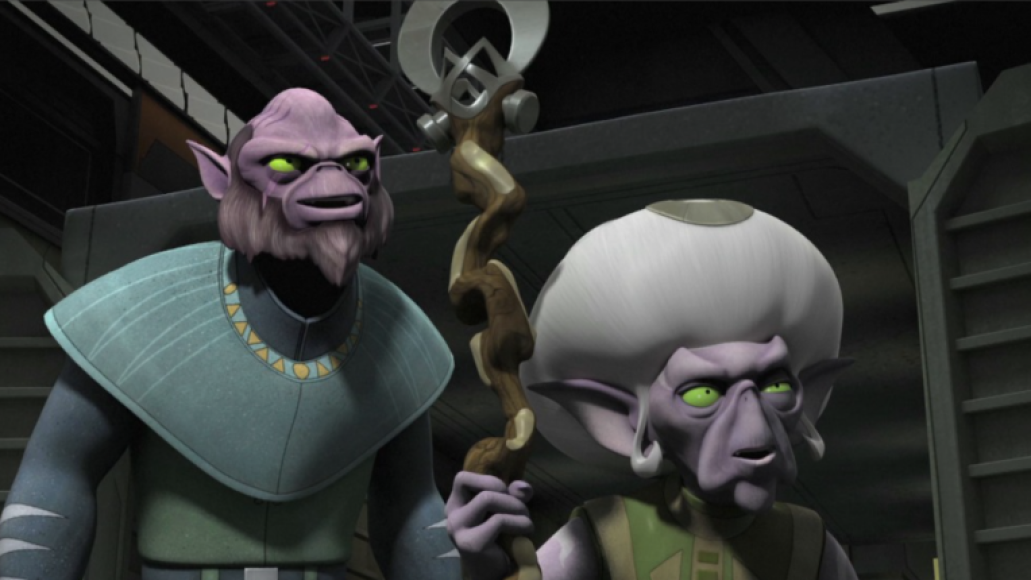 Those dueling sentiments capture the two strains of thought that emerged in the Jewish community after the events of the Holocaust. There were those who, after the horrors of that unfathomable chapter in Jewish history, were all the more devoted to their belief in deliverance, that God would once again lead them to the holy land, an effort made all the more vital given the dark times they had survived.

And then there were those who were understandably broken and changed by the decimation of the Jewish people during these events, who lost their faith in the aftermath of one of history’s greatest crimes. For these people, there was an insurmountable sense that God had failed to intervene to help them, to save so many people who suffered such terrible ends, when they needed him most.

So there’s meaning in Zeb’s hesitance to join Chava and Gron in their ancient rituals, the ones intended to help point the way to that mythic homeland. There’s a sense that Zeb once believed in the promise of that prophecy and that he too had his faith broken by the tragedy that befell his people. Something as serious as genocide — and make no mistake, that’s what Rebels is engaging with here — could lead anyone to question their deepest beliefs and worry that putting stock into that type of spiritual hope only led his people to ruin.

Rebels smartly keeps this material fairly light, though, emphasizing the Force-by-any-other-name qualities of the spirits that guide Chava and Gron, and couching the story in the usual intergalactic cat-and-mouse game that the series does well. After the initial rescue, Zeb and the rebel crew fight and escape from Agent Kallus, one of the show’s recurring antagonists, with standoffs galore. And the episode’s also buoyed by the presence of Hondo, a comic relief pirate whose two-faced one-liners provide consistent laughs.

The heart of the episode, however, is Zeb struggling with whether to embrace the rituals he’s so hesitant to countenance or whether to treat them as mere false promises in the lingering shadow of the Empire’s near-extermination of his species. It’s in the midst of this turmoil that “Legends of the Lasat” adds another dimension to Zeb’s distress at these events — his guilt.

The episode reveals that Zeb was once a part of the Lasat Honor Guard, tasked with protecting the royal family and all of his countrymen. In a tender confession to his crewmate and surrogate little brother, Ezra, Zeb expresses deep remorse at being unable to fulfill that duty, at so many of his brothers and sisters perishing when he had a personal responsibility to keep them safe. It’s a unique take on the same survivor’s guilt that so many who lived through the Holocaust felt, the sense that they could and should have done more and that the very fact that they were still alive was an insult to the people who had died.

But when pressed and encouraged by his new, cobbled-together family, Zeb participates in the old rituals to find his people’s homeland. He reconfigures his weapon in the style of the Lasat of old, and it points our heroes to a planet in uncharted space. In the effort to get there, there’s some of the usual Star Wars excitement. The eponymous rebels face off with the dastardly bad guy; a wizened spiritual leader gives a vaguely worded speech about destiny and self; and the hero of the story embraces the mysticism presented to lead his compatriots out of danger. But it all works.

Zeb’s native, holy object interacts with his vessel to guide them through an imploded star cluster, which destroys their pursuers and leads them to safety. The aftermath is beautiful. A grand, white light dissipates, and the passengers on the ship wake up to see Lira San, the promised land, there before them.

Zeb discovers that there are millions of Lasat down on the planet, and that it’s where his people originally came from. It is the paradise, the deliverance, that he’d dared not believe in after so much of his belief was crushed under the bootheel of the Empire’s cruelty. And yet there it is, a place of salvation and the promise of renewal for his people, waiting for him. It is a dream and a hope that so many displaced and decimated peoples in the real world have prayed for and cherished for centuries.

Star Wars has never been shy about casting its major villains within the iconography of fascism. But true to the subtitle of the movie that started it all, the franchise has also always been about hope, even in the shadow of such malevolence.

The Original Trilogy in particular stands for the proposition that even in the face of constant oppression and an overwhelming force, there are good, committed, brave individuals who can find the best parts of themselves and beat back their oppressors. “Legends” suggests that those who survive a great purge can still find solace and strength in their ancient beliefs and rituals. And Zeb, a man who is still reeling from the loss of his people and his doubts about the old ways, is able to find hope in finding a fabled homeland, a place where his people might be free.

There is a serendipity, then, to the latest Star Wars films coinciding with the Chanukah celebration. These journeys are dressed up in the thrills of interstellar battles and science fiction embellishments and great escapes. But there is an emotional truth at their core, one that speaks to so many peoples facing oppression and devastation, that makes the stories told in the midst of this grand space opera resonate beyond their flash and flair. And that too gives Star Wars fans, of all creeds and colors, hope for what the future may hold.

Hope in the Shadow of the Empire: Star Wars and the Jewish Identity