Levitation, fka Austin Psych Fest, celebrates its 10th year in 2018, and the festival is celebrating with one hell of a birthday bash. Between April 26th and 29th, Levitation will stage 15 shows across six venues in Austin’s Red River District. Showcases will be presented by Sacred Bones, Castle Face, and Burger Records, plus there will pop-up events in nearby cafes, galleries, and record stores.

A second phase of the lineup featuring additional shows and headliners will be released in the early part of 2018.

Individual show tickets, along with a limited number of Deluxe Weekend Passes, are now available through the festival’s website. 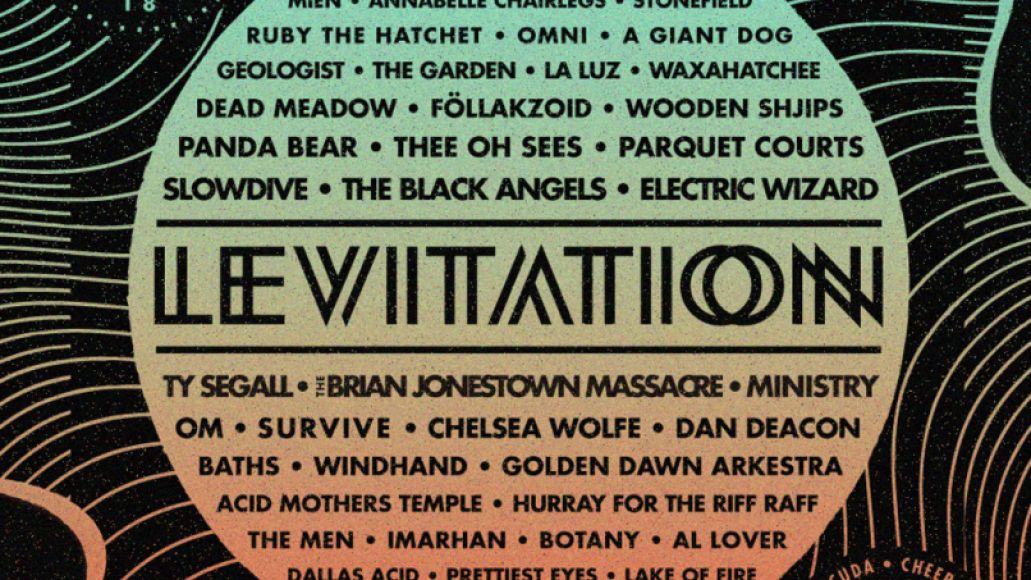 The festival was founded in 2008 by members of The Black Angels and their friends. In 2015, the event change its name from Austin Psych Fest to Levitation in honor of Austin’s psychedelic rock pioneers The 13th Floor Elevators, who reunited and performed the festival in celebration of the band’s 50th anniversary.

Unfortunately, the following year saw the festival canceled due to severe weather. Though organizers were able to reschedule many of the acts for club shows, the cancelation financially devastated the independent festival, leading to its postponement in 2017. Now, after a brief hiatus, Levitation returns as a revamped multi-venue festival, utilizing the Austin clubs that have helped cultivate the city’s unique and legendary music scene — bringing a more intimate experience, with longer sets from headliners alongside all the conveniences of the city, as a press release notes.

In celebration of Levitation’s impending return, several of the festival’s co-founders were kind enough to share 12 Things they’ve loved about the festival over the last 10 years.

Levitation wouldn’t exist had it not been for our psychedelic forefathers, The 13th Floor Elevators. To have them play in 2015 for their 50th anniversary with all the original members (except Stacy) was like coming full circle. It was mind blowing to get to see them perform (electric jug and all) 50 years after their birth. I would have never thought I’d get to witness a live performance by the band The Black Angels and the festival owe their existence to.

The Jesus and Mary Chain (performing Psychocandy):
One of my top five all-time favorite bands and albums, it was surreal to see them play it in its entirety, 30 years after its release. The Black Angels owe their existence to JAMC and especially this album in particular. I remember being in the camping area early Saturday morning, when across the field, I heard them soundchecking “In a Hole” and thinking I’d died and gone to heaven.

Clinic:
Another band The Black Angels owe their existence to. I remember Alex [Maas] showing me Walking With Thee when I moved to Austin in 2002 and I immediately fell in love with it. They’ve been a huge influence on the music we create and having them play at our festival was one of those full circle moments that’s beyond putting into words. 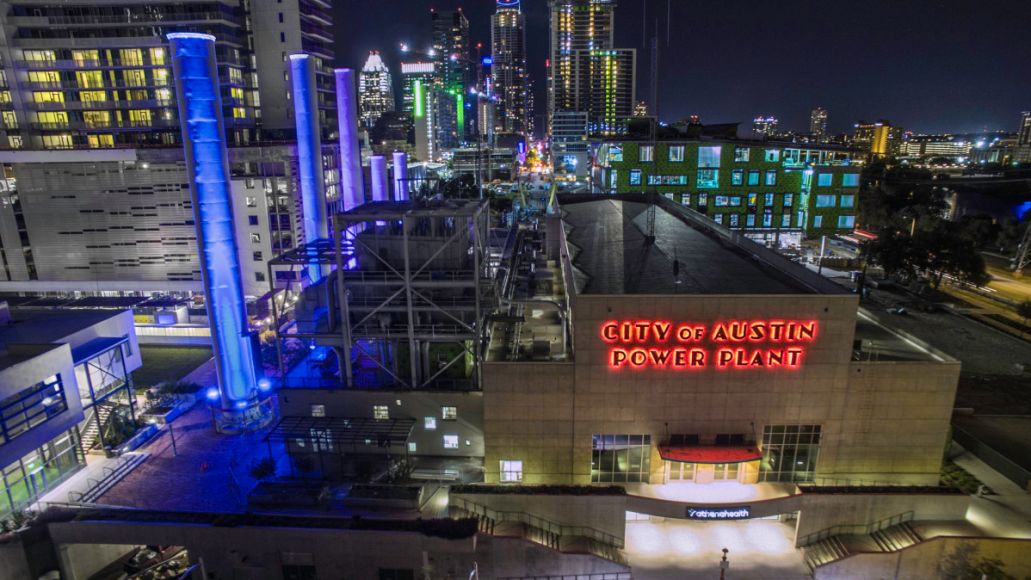 In 2011, we hosted the fest in the iconic and defunct Seaholm Power Plant. We drove past the Power Plant often and dreamed about how cool it would be to throw the festival there. We finally made the dream a reality in our 4th year. Roky played the fest for the first time, along with a ton of other great bands. It really felt like some sort of psychedelic homecoming honoring the past and present. This was one of the last music events ever held at the Power Plant before it became condos.

The Black Lips:
The Black Lips in 2012 was one of the more chaotic scenes from over the years. They created this wild stage show specifically for the fest. Every time the band called out “Magic Time”, it was a cue for the projections and lights to change and these large industrial fans flanking the stage to come on blowing streamers everywhere. It seemed like half the bands playing the fest that year were on stage along with a Terrence Malik film crew and a smattering of locals and attendees making out and throwing rolls of toilet paper into the crowd. It was a beautiful mess.

The Streaker:
During Lightning Bolt’s set in 2015, a streaker made his way on stage and began incoherently babbling into a microphone. Ryan Rooney, the sound guy, gently walked him off back into the crowd. A minute later, the streaker made his way back onto the stage with security chasing after him. The next day, I asked Ryan about the situation and he said his dad streaked the Boston Marathon twice and he saw a little bit of his father in that streaker and just wanted to treat him with kindness. The streaker showed up at lost and found at some point over the weekend looking for all of his clothes, luckily they had been turned in.

Seeing these guys on a big stage in a field with 3K other people who willingly wanted to be taken to another planet that night was amazing. I felt I ever was going to be abducted by aliens, that was the night. The dark, brooding sonic pleasure coming from the stage pierced my heart as I drank the Koolaid they served us. It’s exactly what I wanted in that moment. I felt like I was watching Suicide meets the Suuns and something undiscovered that came from the future. The low end was dialed in and my body started to involuntarily move to the pulse, I was sucked in, converted again. I can’t imagine if they had been on the main stage, they may have started an accidental cult.

Willie Thrasher & Linda Saddleback, 2015:
Again the same year, this was one of my most anticipated shows. Willie Thrasher, was an artist from Light in the Attic’s Native North America Aboriginal Folk, Rock, Country 1966-1985 compilation put together by my longtime friend, Kevin Howes, who dedicated several years of his life to this 2016 Grammys Best Historical Album Nominee. If we had the money we would have invited all the artists on the compilation to play on their own stage all weekend. Maybe in the future!! Willy and Linda played an unforgettable set, with Willy on the guitar and kick drum and Linda playing tambourine. The set became more and more hypnotizing as we got a glimpse of the injustices and firsthand perspective of Willy’s life as a Native American living in a land of people who punished and overlooked whole nations of people who were here before us. The crowd grew and grew as Willy pounded the drum and chanted truths about oppression and depravity.

Aldous Harding — Levitation at SXSW 2017:
One of the best shows I saw all year was Aldous Harding playing last March during SXSW. I was there front and center. I watched and took in every bit of Aldous’ show. She felt like like a female version of David Bowie. It was all in her eyes, all of her knowledge, power, strengths and fears. I had never seen her live before, only heard a few of her songs but I instantly knew she was the real deal. When she played “Horizon” (which I had never heard before), I was in the palm of her hand. I was tearing up, she was so honest and so believable. I wanted to feel what she felt when she sang, I wanted to go through what she had gone through. By the end of the emotionally taxing show for me, she had somehow managed to transfer in a way a piece of herself into me. I was inspired, in love, helpless and was ok with all of it. She will put you in a spell no matter how strong the force is within you let it happen. I got a lesson that night in how to own what you do and be in total control of a crowd, she is a such a STRONG woman and I’ll never forget that night she sang to me.

We have always set out to create an amazing visual experience at the festival, but budget and bandwidth constraints for our tiny team saw us fall short of our dreams many times. This was a year where it felt like things were really coming together — getting closer to what we had set out to create. Bob Mustachio had been doing visuals for The Black Angels on the road, and this is the first year Bob headed up the projections on our main stage. There was a moment as I watched The Brian Jonestown’s Massacre’s set from the sound booth, watching Bob work his magic, and the crowd taking in the music and visuals, where I realized that we had finally reached our goal, and found someone to take it much further. Bob Mustachio, and the crew of lighting and visual artists that he curates and organizes each year is a huge part of the Levitation experience and I can’t thank them enough. Really excited to see what they do in 2018.

Levitation Poster Show, 2015:
My background is art and graphic design, and Christian and I along with everyone else involved are all of course huge fans of the 1960s poster scene. Curating the poster series each year and working with some of my favorite artists from around the year is one of the best parts of Levitation for me, and I think 2015 was the first year it really felt complete. After dropping by the poster show / merch booth and watching people check out all the posters, I went to The 13th Floor Elevators trailer to drop off a copy of the poster we had designed for them specifically in the classic Filmore style. Seeing Tommy Hall’s face light up as he checked it out – that’s a moment I won’t forget.

OM, 2013:
2013 was our first year at the ranch, and a crazy one for me in terms of the controlled chaos of what was essentially a first year festival. But somehow I managed to sneak away and catch part of Om’s set. I was much more familiar with Al Cisnero’s work in Sleep, but this was on my short list of shows to catch. Om fittingly taps into something primal with a heavy, hypnotic rhythm section and eastern instruments and I stood there with my eyes closed, taking it all in for a fleeting moment before rushing off back to the fray. This year I’m looking forward to catching the full set at Mohawk.