Earlier this year, when NBC announced plans to revive Will & Grace after 11 years, Steve Carell trolled fans by tweeting that The Office would also be returning. A few minutes later, however, Carell confessed he had made a “typo” and meant to say “Will & Grace.” 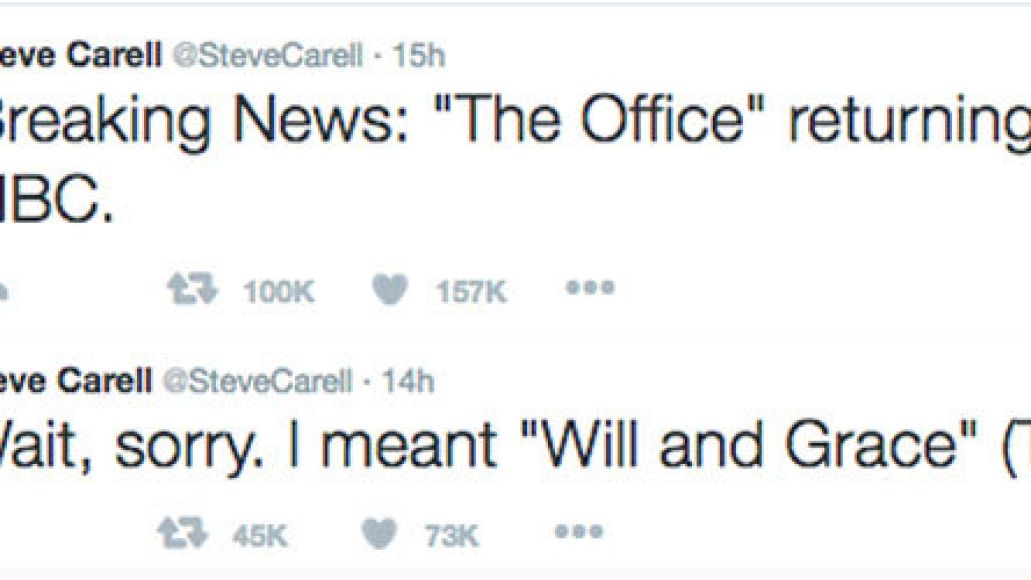 Now, though, after seeing the success of Will & Grace, NBC is actually working on a revival of The Office, according to The Hollywood Reporter. Carell will not be a part of the forthcoming season, but the plan is for a mix of old and new cast members to work out of the same Dunder Mifflin office in Scranton, Pennsylvania, TV Line reports. The search is currently underway for a new leading star, with an eye for a 2018/2019 premiere. Series creator Greg Daniels is attached to the forthcoming project.

NBC president Bob Greenblatt has long expressed interest in reviving The Office, but left the ultimate decision up to Daniels. Speaking to Deadline earlier this year, Greenblatt said he had “talked to Greg four times over the past few years. It’s always, ‘maybe some day but not now’. There is certainly an open invitation but we don’t have anything happening right now. If he wants to do it, I would do it.”

As recently as last year, Daniels shot down the idea of further episodes. “I feel like I did in the finale what [another season] would have been because I jumped forward in time as, like a reunion of the characters, and so, to me, I think that was it. It said everything that the show had to say,” he told The Hollywood Reporter. It’s unclear what changed, but obviously Daniels has had a change of heart.

The Office ran nine seasons from 2005 to 2013. In addition to Carell, the series made stars out of Rainn Wilson, John Krasinski, Jenna Fischer, Craig Robinson, Ellie Kemper, and Mindy Kailing, among others.

NBC is reviving The Office for new season