The parts of Dave Chappelle’s new Netflix specials that get him in trouble — the rehashing of an unpopular transgender joke and a sequence calling Louis C.K.’s accuser a “brittle-ass spirit” — don’t happen right away. But, if I’m honest, I was a little uneasy from the get-go. Everyone who watches comedy is familiar with the “callback,” a punch line that’s a sort of refrain that keeps getting reused throughout the show. Chappelle leads off his first special talking about how he’s so goddamn good at comedy that he literally picks punchlines from a fish bowl and can make them work. He did it tonight, he shares. “It’s not an easy punch line to pull off,” he warns. I, like the onscreen audience, was hooked. Chappelle’s a master at this sort of cocky SOB who probably isn’t completely joking shtick. Then he reveals the punchline: “So I kicked her in the pussy!” The audience laughs while Chappelle tries to keep a straight face and takes a drag off his infamous vape pen.

Oof. He’s going to have to walk this tightrope right, I thought to myself.

If you’re already criticizing me in your head –“You’re way too sensitive if the mere mention of a pussy makes you uncomfortable” — you would be right. But here we are. We’re in a moment where the conversation around what flies and what doesn’t when it comes to female bodies is in flux. The anxiety isn’t just held by feminist writers penning think pieces about comedy legends. In this week’s The New Yorker, Dana Goodyear interviewed a slew of Hollywood insiders, most off the record, all sharing a similar anecdote: “In staff meetings, in writers’ rooms, in casting sessions, how you greet somebody in a restaurant, the language you use — every nuance has been impacted,” one former studio head told her. “Unless someone’s father just died or you are best friends, no one is hugging anymore,” Goodyear continues. 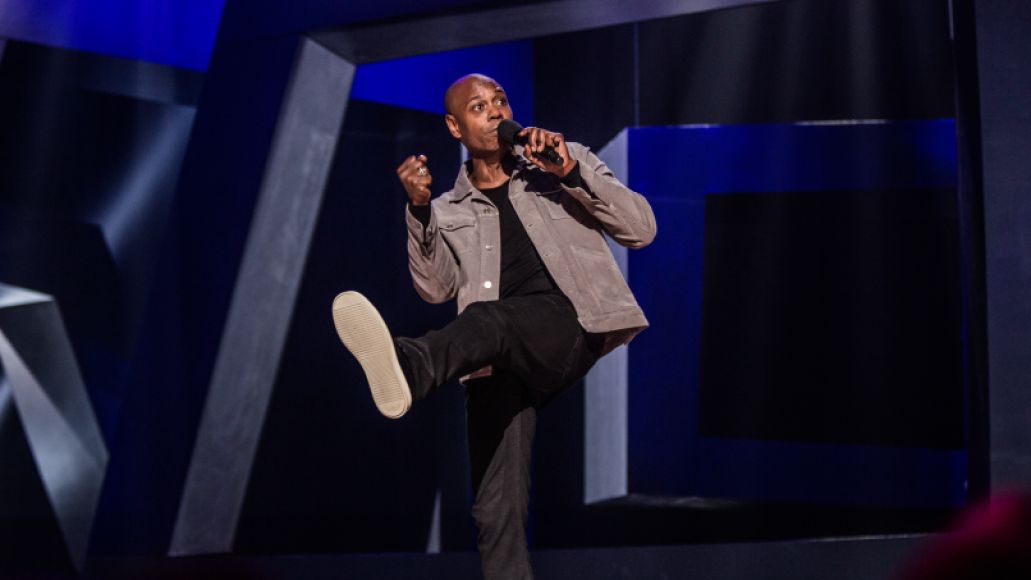 The hug thing and my hesitancy at Chappelle working a set around a pussy joke points to a larger social conversation that’s not quite reaching the surface. The conversation around degree. The closest we’ve come is when Democratic Senator Al Franken resigned amid pressure from his peers. “WTF?” cried half of Twitter. Sure, you shouldn’t grope women, this constituency would argue, but you can’t say it’s worse than what Roy Moore did. Or Trump. Or, hell, even Bill Clinton (the rape charges while running for governor of Arkansas, not the better known intern-in-a-blue-dress fiasco).

A couple of news cycles ago, a friend commented on an article I posted on Facebook, saying: “Do you think the reason the #MeToo movement is catching on so much is because Donald Trump said he could grab women by the pussy and then got elected anyway?”

Of course it is.

Pussy has become an epithet that needs reclaiming, like the n-word and “bitch” before it. A year ago, women marched on Washington with freshly knitted pussy hats, and Obama’s oh-so-safe slogan “Yes we can” has fallen by the wayside for a new generation’s war cry: “Pussy strikes back.”

Women have claimed the word, transforming a position of vulnerability into one of collaborative strength, but men, even male comedians, as Chappelle points out in his special, have shied away. Is pussy on the verge of becoming the n-word where if you’re not Black, you sure as hell better not be using it?

There’s nowhere the n-word is more active than in the rap game, and with critically acclaimed artists like Kendrick Lamar leaving their mark, rap is finally at the center of pop culture discourse.

In 2014, Pitchfork, a publication sometimes criticized for the quality of its hip-hop coverage, named Run the Jewels 2 its album of the year. It was a year of sea change for a lot of indie publications. It wasn’t taboo to cover the mainstream pop hits anymore. Rap was getting its due respect, too. Nicki Minaj’s The Pinkprint warranted a 2,000-word review.

I loved RTJ2, and while El-P’s beats and Killer Mike’s flow were as on point as ever, I think the reason it was so well received is because the album really spoke to the moment we found ourselves in that year. Slower tracks like “Early” felt prescient for a year that saw the death of Michael Brown while “Lie, Cheat, Steal” captured the frustration of hitting your head up against the system we’re all trapped in. But some of the album was just fun. “Love Again” had El-P crooning, “She said she wanted my dick in her mouth all day.”

In the hypersensitive time that is the beginning of 2018, you can easily imagine at least one critic skewering this track. After all, consent is the word of the moment — and, hey, did she really want his dick in her mouth?

As it turns out, yes.

The girl is fine.

It’s become a popular game among cultural critics to recontextualize the work of the offenders in the aftermath of Harvey Weinstein. Suddenly, Louis C.K. jokes have new meaning, and Roy Price looks like a douche for cutting the feminist show “Good Girls Revolt” from Amazon’s lineup. And all that new cultural self-awareness is good, but it’s time we start talking about the shades of gray. While the discussion on what does and does not constitute sexual assault has yet to happen, we can all still hug our opposite-sex friends. And we can all still rap about pussy. Why? Because sex is great. Because talking dirty is hot. We’re taking a second look at the power dynamics, not the body parts. The body parts are still super.

It’s not time to impose some Handmaid’s Tale system of sexual purity in public on ourselves. Art needs a chance to be explicit and vulgar, because our experiences within the world are sometimes explicit and vulgar. Steven Spielberg’s 1985 movie The Color Purple was less good because he was too chickenshit to depict Elsie’s discovery of clitoral stimulation in the same detail Alice Walker does in the book. 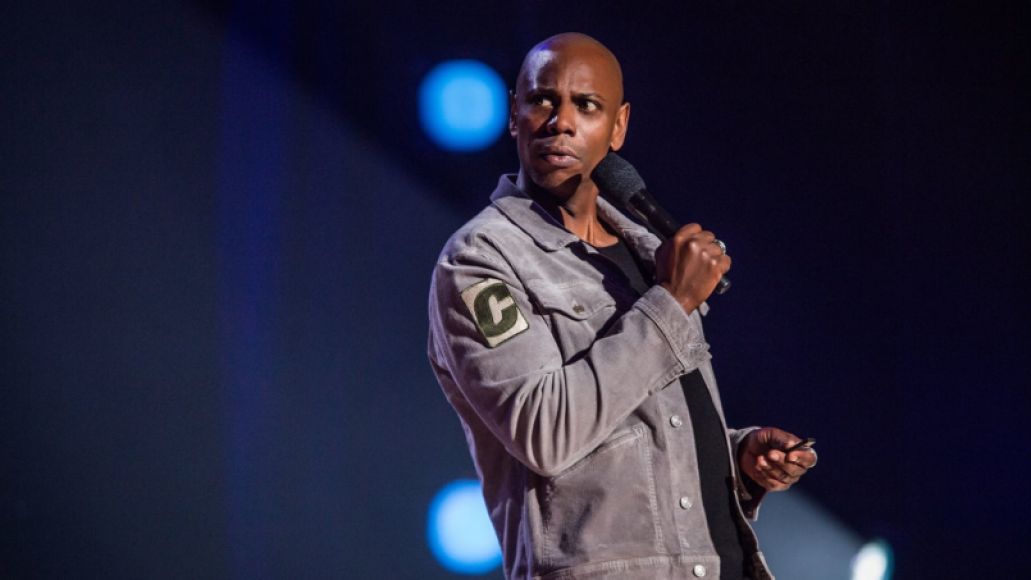 Like the popular critic’s changing perspective on pop and hip-hop, in this decade, we’ve called bullshit on the idea that “lowbrow” art isn’t worth discussing. That means artists can and should pussify their content to their heart’s content — but we can still discuss if they do it successfully or if it’s retrograde offensive nonsense. A lot of doing it successfully comes from propelling the conversation forward, or, at least saying some deeply held truth in a new way.

Chappelle, in Chappelle: Equanimity, does a bit about how he voted for Hillary in the recent election, knowing it should have been exciting to vote for the first female president, but, like a lot of people, he couldn’t get too hyped about Clinton. “It didn’t feel bad voting for her, but it didn’t feel as good as it should’ve. She was going to be our first woman president. They were gonna make coins out of this bitch,” he starts. “You know what voting for her felt like? … It felt like I was lucky enough to eat Halle Berry’s pussy, and whilst I was doing so, she fucking farted in my face, man. Now you’d understand, I’d still do it. But boy I wish she didn’t fart in this great nation’s face.”

The in-person audience dies laughing with the “fucking farted in my face” line, and no matter your politics, you have to at least acknowledge how the joke captured the feeling of a significant swatch of the population. That’s what good humor does: it reframes reality in an absurd way. Sometimes that reframing provides the best sort of relief — that “yes, yes, that’s exactly how I fucking feel” emotion.

In that way, comedians are thought leaders. They know how we feel better than we, the general population, know how to articulate it. That’s why Dave Chappelle’s joke about Caitlyn Jenner is riling people up. Because it’s not smart. And it’s not even funny. It goes like this:

“I read in the paper that Caitlyn Jenner was contemplating posing nude in an upcoming issue of Sports Illustrated. And I knew it was politically incorrect to say, so I figured I’d just say it for everybody — yuck. Fuck, man, I just want to read some stats, like why are you cramming man-pussy in the middle of the sports page like that?” 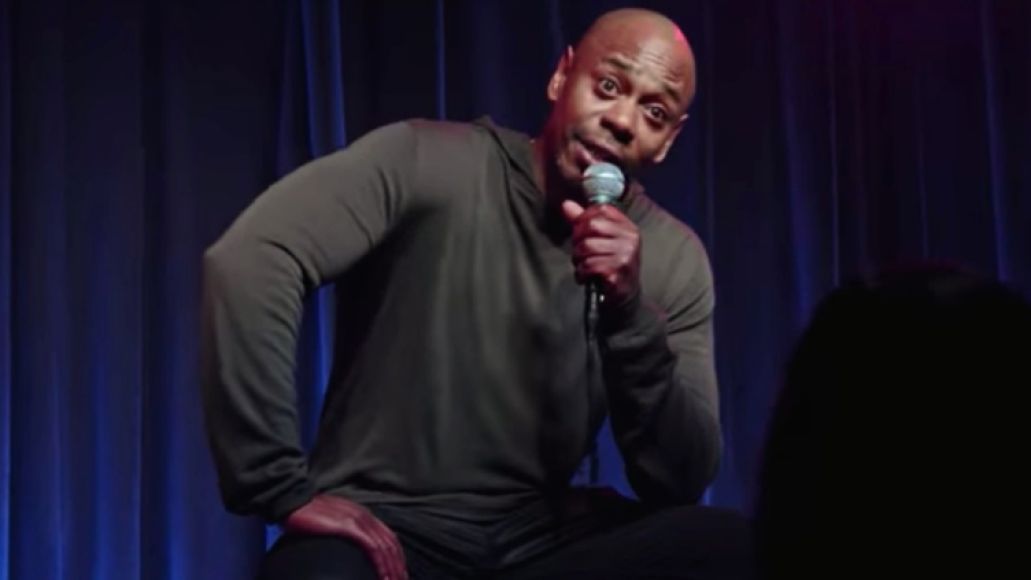 The reason the joke doesn’t work isn’t just that it’s transphobic. And it’s not that some topics are off limits. It’s because it’s just so antiquated in its thinking that it feels like listening to your redneck uncle talk about the negros up the street causing a ruckus. The part of culture that watches comedy on Netflix and remembers Chappelle’s popular sketch show from the mid-‘00s has moved on from the old stereotype of transgender people as some sort of evolutionary intermediary between male and female. We have well-known spokespeople now, like Laverne Cox, who looked pretty damn good on the cover of TIME in 2014. Chappelle’s joke isn’t getting at some deeper truth, at least not for the people who watch comedy in 2018. He’s just reaffirming the fears of trans teenagers who don’t want to wear a bathing suit, because they’re worried their friends are thinking exactly what Chappelle said: “yuck.” So, sure, Chappelle’s joke is a truth to someone. But the fucked-up truths held by 16-year-old asshole kids who haven’t lived yet aren’t the truths we’re looking for our thought leaders to explore. We want comedy to keep up with the times. Comedy can use taboo topics and still be funny, but they’re not funny if we thought this shit was true 10 years ago, and now we’re in a different place.

Chappelle, in his special, says, “The whole country has turned into a bunch of bitch-ass niggas.” He’s talking about his critics, sure, but he’s also talking about his fellow comics who shy away from topics they get reamed for — like Chappelle did for his transgender jokes — and are now walking on eggshells about Hollywood’s sex problem. But I think he’s wrong in characterizing his critics’ critique as some jokes inherently being off limits. Hell, Tig Notaro made a name for herself making dark humor about her struggle with breast cancer. Anything is possible. But comedy is only funny when it’s true. The conversation around transgender people has changed. And in 2017, women reclaimed the pussy. We need a comedian who’s aware enough to see where that conversation should go next.

Dave Chappelle’s Netflix Specials Raise the Question: Is "The Pussy Joke" Off Limits in 2018?