First Aid Kit have released their new album, Ruins, today. Apple Music and Spotify subscribers can stream it in full below. You can also pick up the vinyl here.

Due out via Columbia Records, Ruins serves as the Swedish folk outfit’s fourth full-length to date and follows 2014’s Stay Gold. Its 10 tracks were produced by Tucker Martine (My Morning Jacket, Laura Veirs) in Portland, where the duo collaborated with the likes of R.E.M.’s Peter Buck, Wilco’s Glenn Kotche, and Midlake’s McKenzie Smith.

Regrouping after an exhaustive run on the road, sisters Klara and Johanna Söderberg come off stronger as a creative unit, as well as willing to expose more of their inner selves than perhaps ever before. Here, the Swedish outfit focuses on a crushing heartbreak and the feeling of absolute purposelessness that follows, assisted by elements of Americana, folk, and ‘50s-era Everly Brothers balladry. 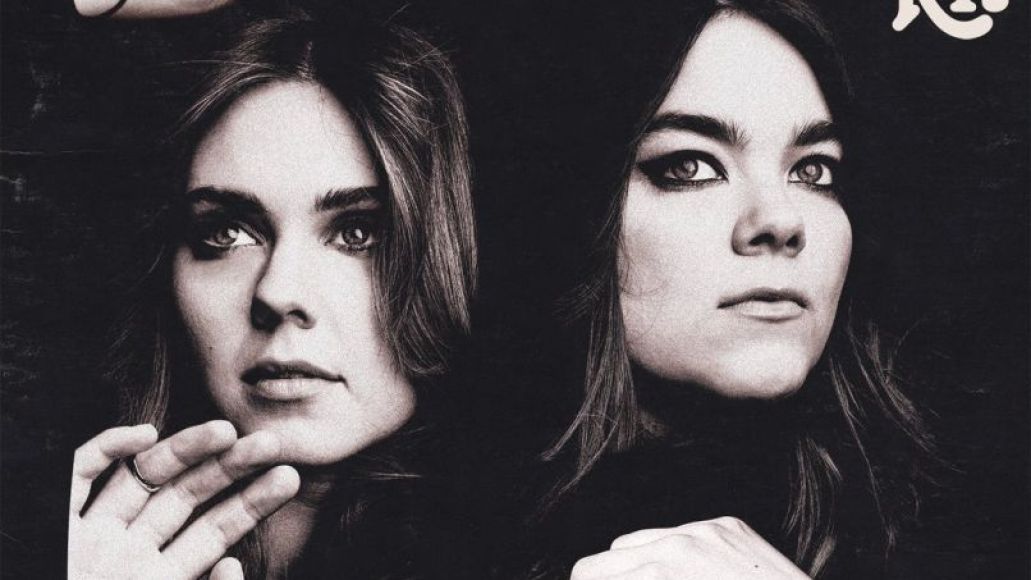 For a better understanding of Ruins, First Aid Kit themselves have provided a track by track breakdown of the entire thing. Read what the two-piece has to say below.

We stayed in California for five weeks to write new material for Ruins. During this trip we went out to Joshua Tree. We rented a gorgeous dome house that was very isolated. When we wrote this song we’d been playing around with these old occult themed board games, tarot cards and an ouija board that was in the house. There was a storm outside, it was late at night. We could see the starry sky very clearly. We were overcome by this haunting feeling of being only the two of us alone in a house in the middle of the desert. This was during a quite tumultuous time of heartbreak and emotional disorientation. This song came to us in the midst of all of that.

The ending of “Rebel Heart” begged to be epic, we wanted to take the listener on a journey. Recording it in the studio with Tucker Martine was incredible. We didn’t really know what do with the song at first, but as soon as Glenn Kotche played that drum pattern in the second verse we knew this was going to be the album opener. It just felt so cinematic and powerful.

This song was written in the car going back to our rental house in LA after spending a beautiful day at El Matador beach. It’s a song about having to get used to being on your own after being with someone for a long time. How desperately lonely you can feel. How you wish you were stronger and how ashamed you can be of the fact that you’re not. When we traveled to LA we had lots of expectations of what the trip was going to be like. It didn’t really turn out the way we had planned. We were both very sad. “It’s a Shame” came out of the frustration and guilt we felt at the time.

We were listening a lot to Fleetwood Mac’s Rumours when recording this song in the studio. There’s a bouncy quality to that record that we love. We wanted the song to feel alive and upbeat, in stark contrast to the lyrical content.

“Fireworks” is about hopes, dreams and expectations. How they sometimes can get in the way of your day to day. Sometimes we set ourselves up by having too high or too specific expectations on ourselves and of other people.

The arrangement was inspired by 50s ballads, by The Everly Brothers and the Skeeter Davis song “End of the World.” In the studio we played around with the old timey feel of the song, but also added these 80s juno keyboards and Twin Peaks style guitars to mix it up. It actually was almost effortless, we knew what we wanted the arrangement to be like instantly. We really felt like we’ve created an interesting sonic world for the song. It’s a little bit of a new sound for us, though not in a forced way. Safe to say, we’re very proud of this one.

“Postcard” is the most traditional song we’ve ever written. The first verse and chorus of the song were actually written by Klara during a Lucinda Williams concert. She was so inspired she had to write the lyrics down on her phone. She felt guilty because if Lucinda saw her in the crowd it must’ve looked like she was texting the whole show. She just couldn’t help but feel super inspired.

It’s a real country tune and we stayed true to that in the arrangement of the song. Melvin Duffy, our legendary pedal steel player, shines on this track. We’ve been playing together for over five years, but this was the first time we got to have him play on a record. The “pick it for me James” line in the song is referencing “Return of the Griveous Angel” by Gram Parsons. It’s one of our favorite songs of all time. Gram was referring to James Burton, the guitarist he had borrowed from Elvis’ band. We didn’t have anyone called James in our band, it’s actually our dear friend and band member Steve Moore who plays that lovely piano part.

At the core we are a duo. During our first years touring it was just the two of us playing. We’ve always had the mindset that less is more. Therefore we’ve decided that we always have to have at least one quiet moment on our records. “To Live a Life” stood out early on as the contender. It’s a song about acceptance and perseverance, no matter how hard it may be. While the start of the song is very sparse, we wanted it to build a little. At the very end we wanted it to feel like you were entering a dream world.

This song was actually written for the movie Fault in Our Stars. They rejected it, but we liked it anyway so we kept it and it ended up on the album. We just switched out a few lines of the lyrics to make it fit the rest of the album. It’s one of the sweeter moments on an otherwise pretty dark record. We love the open feeling of the arrangement and the way the strings sort of dance around towards the end of the track.

“Distant Star” sort of starts out like a classic country song, almost like it could be an old Louvin Brothers gem. Then it turns and becomes something completely different. The bridge part is very psychedelic. We love having those unexpected moments on our album, this is kind of like a musical sibling to “Dance to Another Tune” on The Lion’s Roar. It’s a song about trying to understand another person, but never feeling like you are on the same wavelength.

“Ruins” felt like a good title for this record. We’re walking around inside the ruins of a relationship. We’re seeing the good as well as the bad and trying to make sense of it all. It’s sad, but there’s still hope and rejoice in the beautiful memories.

This song was written by me (Klara) very quickly. The lyrics are almost word for word how they came out in the spur of the moment. Every song on the album has its own take on heartbreak. In this song there’s more self-awareness, a distance to everything that has happened. There’s almost a sense of irony in singing “So here we go again” and “Oh, I guess that’s the way it goes”… We wanted to achieve that feeling in the arrangement too, so we decided to make it a little rougher than the other songs. We’d been listening to Neutral Milk Hotel a lot and wanted to capture that kind of rawness. The choir at the end consists of everyone in the band, plus our mom and little brother, singing at the top of their lungs. We’re also proud to say the amazing Laura Veirs is also in there singing. It’s sort of saying – “Hey, perhaps it’ll all go to hell but, fuck it, let’s just sing!”

“Nothing Has to Be True”:

“Nothing Has To Be True” was written in Nashville. We’d been to Carter Vintage Guitars where we saw this incredible guitar. It was a custom made, one of a kind Gibson from the 20s with gorgeous star decorations. It was the most beautiful guitar we’d ever seen. The price tag was no joke though. We posted a photo of Klara holding it on Instagram. That same night we had plans to meet up with our friend Jack White. At the end of our dinner, he told us he had gifts for us. He had bought the guitar (!!!) as well as a beautiful mandolin to go along with it. The guitar came with a note that said “write one for all of us on this piece of wood.” So we did.

This is the first song we’ve ever recorded that doesn’t feature any harmonies. We take turns singing each verse solo. It was kind of scary to be so bare, but it made sense for this song. In the end part, almost all of the people who played on the record are in there together, creating this beautiful chaotic mess. It was freeing to let the instruments do the talking and hopefully give the listener some space to take it all in. The song and record ends abruptly, with this white noise loop we made. It’s almost as if you are waking from a dream.

Track By Track: First Aid Kit break down their new album, Ruins, plus stream it in full