Credit David Letterman’s booking department for securing the perfect first guest for his new Netflix talk show series, My Next Guest Needs No Introduction. As thrilled as many are to see the longtime late-night stalwart back hosting, if only for six hour-long episodes, nobody registers as a more welcome sight for sore eyes in early 2018 than POTUSA 44 Barack Obama. And yet, as eloquent, humble, and inspiring as Obama remains, even when talking to comedians and pop-culture figures, the initial episode of Letterman’s new gig suggests that the famously sarcastic and grumpy comedian might be the one stirring emotions this time around.

The last time I saw David Letterman actually at work on television, he was talking to Tom Waits about freeing “Glutens” while handcuffed to George Clooney during the final days of his celebrated run as host of the Late Show. It’s a set of circumstances very unlikely to turn up in the albino-bearded, jacketless host’s new format. Apart from Letterman’s retirement look, gone are the Ed Sullivan theater, the desk, the New York backdrop, Paul Shaffer in the wings, monologues, and Top 10 lists. If this were on television, rather than Netflix, the only thing that might make someone pause their surfing and recognize My Next Guest as a David Letterman show are the familiar hazel eyes squinting behind his glasses as they did for thousands of late-night episodes.

Though a blink-and-miss commitment in sheer number of episodes, it’s a risk for any entertainer to step outside a format they’ve been perfecting for decades and, more importantly, been permanently associated with by audiences. Really, aside from some red carpet appearances here and there over the years, my knowledge of Letterman the entertainer outside of late night boils down to him propositioning Chris Elliott to purchase his monkey in a regrettably memorable cameo in the painfully forgettable Cabin Boy. Veteran as he may be, that’s not much to go on. It’s one thing for Letterman to talk to a guest, plug something, and tease out a few jokes over eight minutes. It’s quite another to curate an hour-long interview that keeps wandering Netflix eyes from peeking in on the punchier Comedians in Cars Getting Coffee instead.

Surprisingly, Letterman sticks to the interview format for the duration. When Obama turns the tables with questions of his own early on in the episode, old man Letterman playfully corrects him as though the former president has been skateboarding and blaring his music too loudly in front of the comedian’s house. He steers the interview back to topics he’s interested in: retirement, Michelle Obama’s work as First Lady, Obama’s childhood, a divided America, and the ritual of taking children off to college. Letterman’s smart, amiable, and self-deprecating for a few laughs, but spends the bulk of the time listening. In truth, the first half of the episode makes you wonder, “Why Letterman?” Seemingly anyone could be asking these questions from an adjacent chair and nodding to the responses. 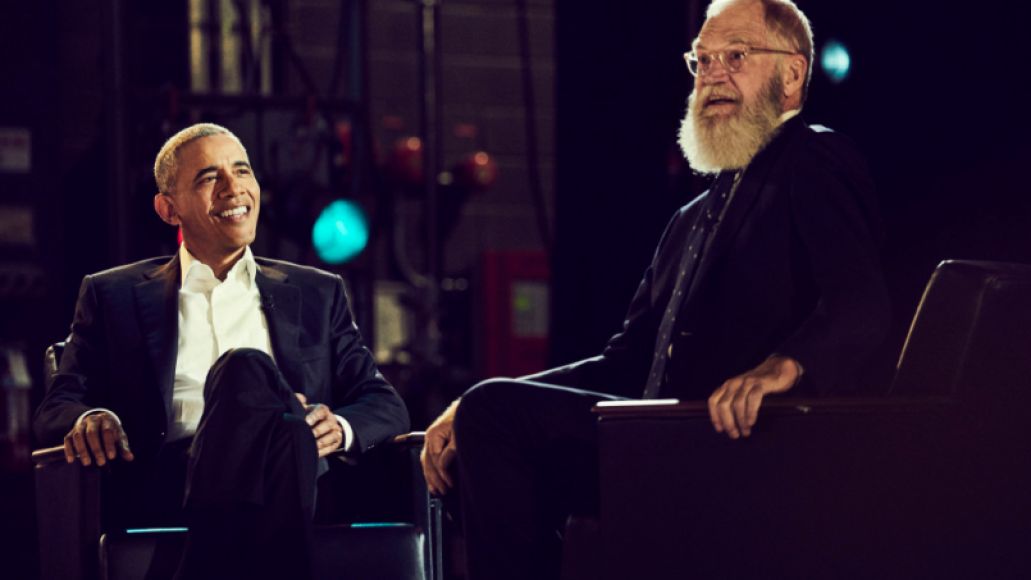 Then Letterman cuts to footage of him walking across the Edmund Pettus Bridge in Selma, Alabama, with congressman and civil rights leader John Lewis, talking about that Bloody Sunday in 1965 that Lewis took part in. Black-and-white clips of the march and violence intertwine with the visual of the two men crossing the Alabama River on a crisp afternoon. At one point, Letterman asks, “Barack Obama would’ve been with you had he been the right age, wouldn’t he?” Yes, indeed, Lewis assures him, suggesting that on the other side of that bridge was both the vote and Barack Obama. “If it hadn’t been for the march, there’d probably not have been Barack Obama as President of the United States.”

That footage alongside Lewis acts as the episode’s turning point, and the viewer finally feels Letterman’s presence and guiding hand in all that’s taking place. Yes, he makes a couple cracks about wrapping up the interview so that Obama can get back to the Oval Office, but the show, as you might expect with the author of The Audacity of Hope as guest, opts for being lifted up by possibility rather than descending into today’s ubiquitous cynicism. In the final moments of the interview, Letterman does let Obama finally ask him a question. Why do so many people refuse to admit luck has something to do with their successes, wonders the former president.

“Mr. President, this is what I am struggling with at this point in my life. I have been nothing but lucky,” Letterman responds, explaining that when John Lewis was being beaten nearly to death for trying to cross that bridge in Selma, he was on a cruise getting drunk with friends. “Why wasn’t I in Alabama? Why wasn’t I aware? I have been nothing but lucky, and the luck continues … you are the first president I truly and fully respected.” It’s a sincere moment tinged with regret but also with the appreciation that comes with a lifetime’s wisdom and the understanding that what we do today changes what happens tomorrow. Many of us know Letterman to be an intelligent man with views and opinions, but rarely, if ever, has he allowed himself to be so vulnerable, so open without the expectation of a laugh in return.

George Clooney will be Letterman’s next subject. After the first episode of My Next Guest, it’s difficult to believe that Letterman is simply running out old friends for the sake of the good, old days and some laughs. It’ll be worth tuning in to see what that interview with Clooney ultimately tells us about an old friend who we’re maybe just starting to really get to know during his retirement.