Let’s talk about the laugh track.

The problem with the new Will & Grace isn’t that there’s still a laugh track. It’s still “filmed before a live studio audience,” with all the charm and artifice that those words conjure. Stumble onto it while flipping through channels, and you’re suddenly sitting in a living room in 1998. It’s been two decades since Debra Messing and Eric McCormack first aggressively hugged themselves into our lives, and since then, both the TV landscape and the world at large have changed dramatically — but from watching the show, you’d never know it. Send an episode of the new Will & Grace back to 1998, and a viewer would have only three questions:

01. Why does everyone look slightly older?

03. Why are they all pretending that Donald Trump is President?

Short version: NBC took Will & Grace out of packing peanuts, updated some cultural references and called it a day, just as Netflix added an -er to Full House and thought that might be enough to make magic happen. If this is a sign of things to come, it’s a very bad one — but it doesn’t have to be. There’s no one right way to revive an old title, but this is a wrong one. Everything changes. Why on earth would you choose to keep things exactly the same? 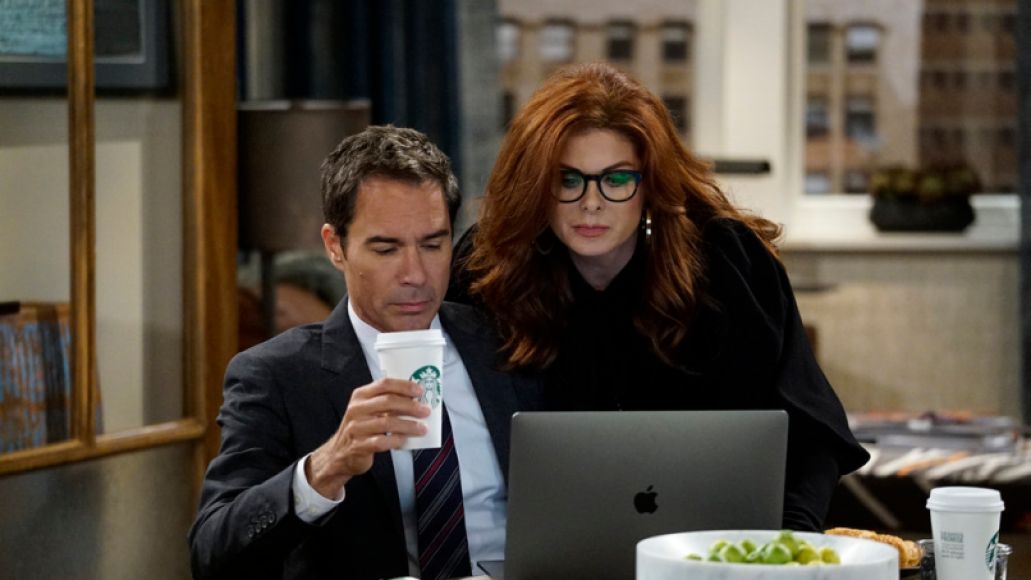 As the networks — broadcast, cable, and streaming — continue to pine for old glory days, more and more familiar faces will be cropping up, wearing old costumes and hitting the same tired punchlines. Reunions, revamps, reboots, returns: Call them what you will, but many will offer nothing but disappointment. That’s not to say that the Will & Grace revival is garbage. Few things featuring a cast that good, and no things featuring Megan Mullally, can be considered truly without value. But it is a paper-thin thing, a relic of a not-so-bygone era trying desperately to prove that it’s somehow both: a.), exactly the same, and b.) totally hip to today’s hip stuff. It’s the “how do you do, fellow kids” of television shows. And it doesn’t have to be.

For one such example, look to One Day at a Time, Netflix’s excellent series based loosely on the Norman Lear sitcom of the same name. The original, which ran for nearly a decade, followed a single mom as she raised two teenage daughters; the current series, developed by Gloria Calderon Kellett and Mike Royce and executive produced by Lear and others, focuses on a single mom (Justina Machado) raising a teenage daughter and pre-teen son, aided by her mother (Rita Moreno). Both versions address the struggles a woman faces raising children alone, both follow familiar sitcom beats, and both have, yes, the dreaded laugh track. But for all its old-fashioned touches — Moreno plays the quirky grandmother thing to the hilt, episodes often end with a touching family moment, and bits come back in all the comfortable places you expect — today’s One Day at a Time is almost defiantly modern. Conflicts arise, and there’s rarely an easy answer; people try and fail to change each other’s minds, and instead find resolution not in winning, but in reaching a place of understanding; the family encounters weekly struggles, but almost nothing gets wrapped up in a tidy bow. It has a comfy ending, but the story always, always continues — and those stories, about immigration, our country’s treatment of veterans, sexual orientation, misogyny in the workplace and our culture, religion, PTSD, are handled matter-of-factly, but with incredible care. 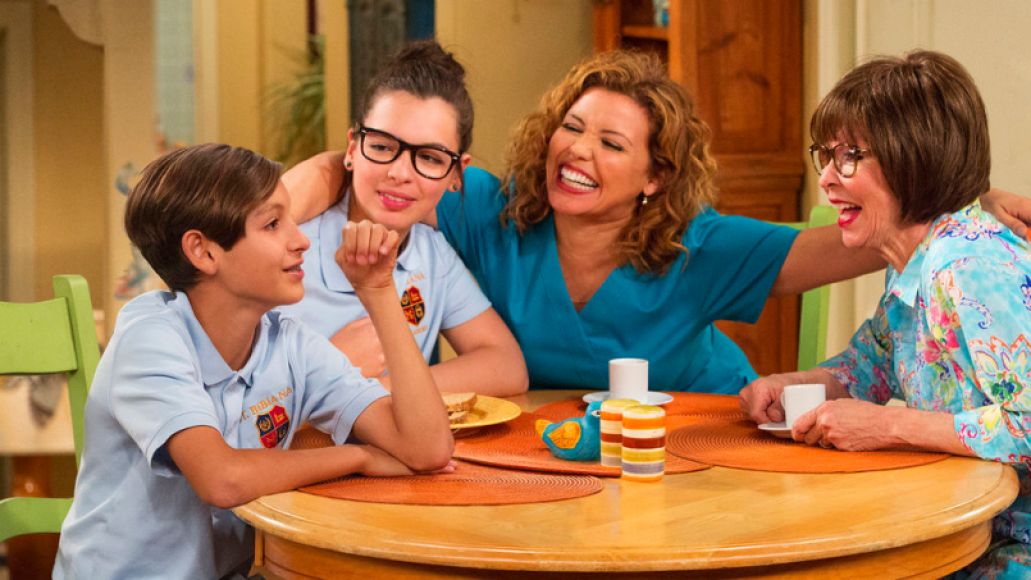 There’s not a trace of that kind of complexity in Will & Grace. That’s not to say that the series doesn’t address important issues from time to time. In its original run, it was groundbreaking, introducing American audiences to gay characters who were more than punchlines or tragic figures, and whose continued presence in our living rooms helped to pave the way for more such stories. It’s still doing that, in a sense: an early episode sees Will (McCormack) educating a much-younger date (Ben Platt, lately of Broadway’s Dear Evan Hansen) on the struggles that older queer men and women had to go through “so you could walk down the street in skinny jeans with rights you never knew you never had; in another, Jack (Sean Hayes) has to try to get his newly-discovered grandson out of a “conversion camp” to which he’s sent by his parents, who don’t want their effeminate son to turn out like his grandfather. But these stories are straightforward, and painted with broad strokes. At no point do you think Platt’s character will fire back at Will, addressing some of the older man’s perhaps less progressive ideals. There’s no chance that Jack’s fabulous young descendant will get left in that camp, which, by the way, is run by Jane Lynch and Andrew Rannells, and played almost entirely for laughs. It’s clear where you’re supposed to laugh, or to clap, or to coo over the sweetness. It’s paint-by-numbers TV.

There’s one episode, so far, where Will & Grace stumbles into something more thoughtful, and unexpectedly, that one hour puts the sitcom in conversation with, of all things, Twin Peaks: The Return. “Rosario’s Quinceañera” doesn’t come close to approaching the brilliance of Mark Frost and David Lynch’s daring achievement, but it does do one thing that was fundamental to the success of the latter: it acknowledges the passage of time, the fragility of life, and the ways in which those two things are inextricably linked. Rosario (Shelley Morrison), the longtime maid, foil, and friend to Mullally’s Karen Walker, dies after a heart attack, leaving the show’s most reliable punchline machine at an utter loss. There are still plenty of off-notes — why the show’s writers decided this was the most appropriate hour in which to welcome back Minnie Driver’s Lorraine Finster is beyond me — but watching a well-loved sitcom character confront loss and mortality head-on is dynamic, unusual, and of no little value. 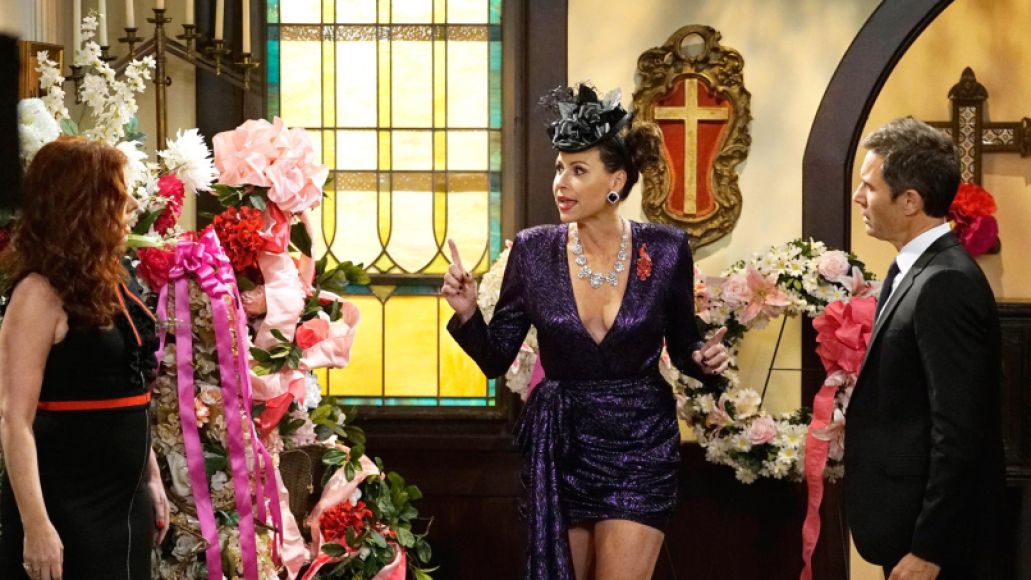 It works, mostly because Mullally is so good, but also because it doesn’t feel like an episode of WIll & Grace. The structure is the same, but the resonances are different, the mood altered, the jokes more profound at their best, and more hollow at their worst. Like the entirety of Twin Peaks, it not only acknowledges the passage of time, but embraces it as an undeniable part of the story. People age, and die. Their faces fall, their wrinkles show, they get sick, and well, and sick again. People die, and those who remain, do what they can to move on. And with each death, the world changes a little. It doesn’t go back to normal, but instead finds a new equilibrium, and those who chase the old equilibrium do so at their peril.

So Karen Walker stands over a casket, and Audrey Horne dances in a bar, and both look familiar, but are entirely new. It’s suddenly not a simple matter of shaking off the packing peanuts. It stands in its history, and builds something original from the ashes.

What version of Roseanne is headed our way? What will a new-old Mad About You tell us about the world? What will next week’s new X-Files bring, and what, pray tell, is getting pulled out of the mothballs next? There’s no way to know. But as we continue to revisit old television haunts, let’s hope those creators aren’t chasing the old spark. Let’s hope they’re looking to the world around us, to the charms of One Day at a Time and the horrors of Twin Peaks. Let’s cross our fingers and dream of writers spending long nights watching all these mistakes play out, and learning from them. Let’s wish, not for another “Rosario’s Quinceañera” or “Part 8”, but for something else that’s entirely new. 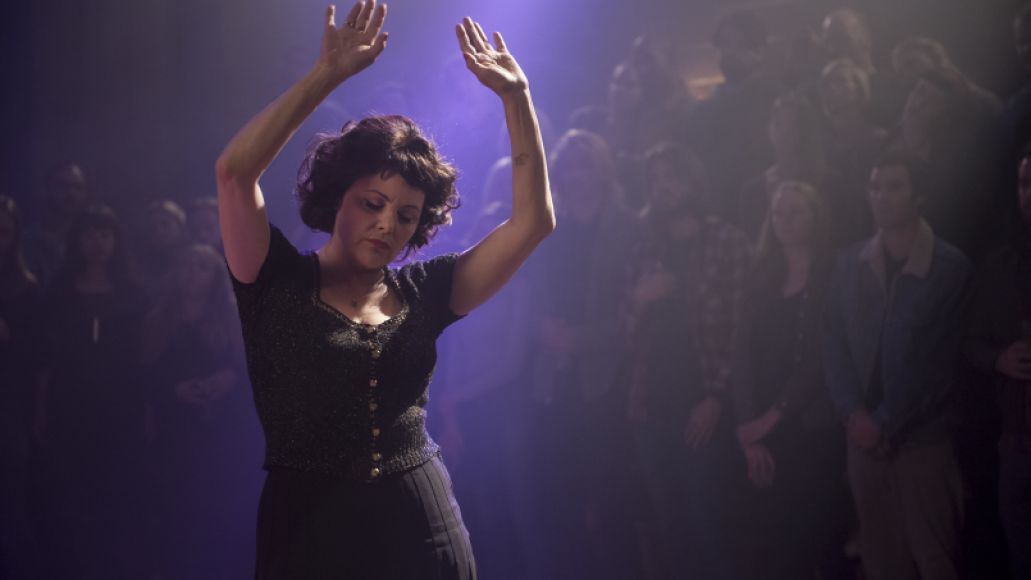 Go to the past, if you must. But if you do, please, for the love of god, introduce the past to our future, and see what happens.