This spring, The National will stage a music festival in their native Cincinnati, Ohio. Presented in association with MusicNOW, the two-day Homecoming Festival is set to take place at Cincinnati’s Smale Park on April 28th and 29th. Today, the preliminary artist lineup has been unveiled.

Unsurprisingly, both nights will be headlined by The National themselves, who are set to deliver “two unique shows.” Also performing are Father John Misty, Feist, Future Islands, The Breeders, Lord Huron, Julien Baker, Moses Sumney, Alvvays, and Big Thief. More artists will be announced in the coming weeks, as will a number of additional events spread across the city.

Tickets and more information for Homecoming Festival are available now. Those who purchase passes will be offered discounted pre-sale tickets and free access to some of the events associated with MusicNOW, an event which was founded by The National’s Bryce Dessner and which runs concurrently to Homecoming.

MusicNOW will also feature a photo exhibition from photographer Graham MacIndoe, who shot The National’s Sleep Well Beast album cover and subsequent tour. Two video installations by Icelandic artist/The National collaborator Ragnar Kjartansson will also on display at the Cincinnati Art Museum, and the Cincinnati Ballet will present a work based on Bryce Dessner’s “Murder Ballads”, with music performed by eighth blackbird.

More info on MusicNOW is available at the festival’s website.

The National are hardly novices when it comes to founding and curating music festivals. The band also has a hand in such festivals as Wisconsin’s Eaux Claires, Boston Calling, and Copenhagen’s HAVEN Festival. 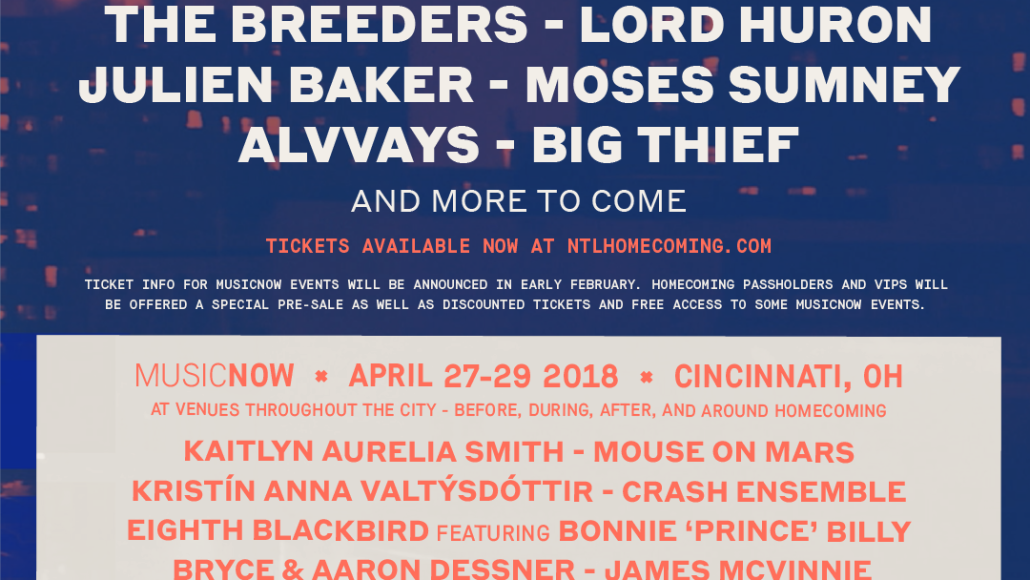