I’ve watched Louis C.K. since I was in high school. He’s always come across to me as an amiable guy with an edge: the family man on Lucky Louie, the loveable oaf on Louie, the relatable misanthrope in his stand-up specials. I liked his self-effacing humor. He was the kind of guy who subtly boasted the privilege that made me want to be a guy: the wiggle room to “let yourself go” a little without being looked at differently than your fit peers, the assurance that people will laugh and nod at your disgusting habits.

This sort of male privilege envy also found my penchant for male-led indie and emo bands — the kind that cursed at and pined after women in the same breath. My internalized misogyny masked itself as a love for angst-driven music and black comedy, but I was too invested to realize it. Watching them was like inhabiting a different, easier body.

Hearing the sexual assault allegations against some of my former idols stirred a strange reaction. Stories outing various public figures were released by the hour after over 80 women came forward with claims against Harvey Weinstein, citing instances of rape, assault, and harassment. The litany of horrors about my favorite comic, my favorite bands, and Weinstein left me distraught — over the victims they made to feel powerless and the entertainment-hungry system (myself included) that enabled them. How had I overlooked this? But also, did this mean there wouldn’t be another season of Louie? A wave of disgust quickly washed away that selfish concern. But, as ashamed as I was of that thought, it didn’t surprise me, and I’m sure I wasn’t alone in it. 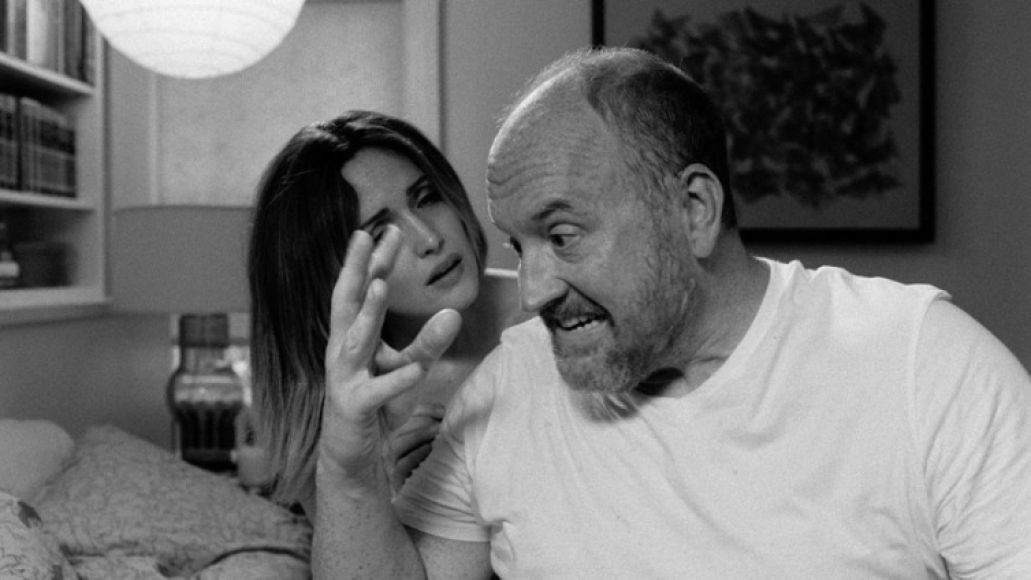 Entertainment is a certain kind of brainwashing. It placates and conditions us to artificial realities and standards — misguided morals don’t seem to carry weight when viewed through a television screen. However, when we accept harmful content as reality and no longer contain it within entertainment, we give power to those ideas and their purveyors. In a world that seems to grow darker by the day, there’s little room for entertainment without evaluation.

Looking back, I can recall warning signs. There’s one scene in Louie that sticks out to me the most. He comes home to Pamela Adlon, who’s asleep on his couch. Laying with her back to Louie, she tells him not to “jerk off.” This remark is almost haunting now. Adlon is friends with C.K. in real life and a writer on Louie, so I can’t help but wonder if she knew something and, in keeping with the show’s semi-raunchy fashion, treated it like a joke. In the episode, Louie holds Pamela down and tries to kiss her. When she begrudgingly accepts the kiss and leaves, he throws a celebratory fist pump. It’s a distressing scene, made even worse by the brazen attitude it was met with, passed off as Louis C.K.’s signature dark humor.

But blaring hints to C.K.’s misconduct go farther back and beyond the screen. In 2012, Gawker came out with an article titled “Which Beloved Comedian Likes to Force Female Comics to Watch Him Jerk Off?” Spoiler: it’s Louis C.K. Three years later, Gawker further substantiated the piece with “Louis C.K. Will Call You Up to Talk About His Alleged Sexual Misconduct”, sharing the story of a fan who called out C.K. via e-mail and actually got a response. He wanted to know what the fan had heard and left the conversation open-ended. That same year, Death and Taxes posted the article “Did Jen Kirkman out Louis C.K.’s gross behavior on her podcast last month?”. Somehow, all of this flew under my radar.

Hints and rumors decrying my favorite band circulated with as much prevalence, but were buried further beneath the surface. Brand New’s frontman, Jesse Lacey, had always been understood as a scumbag. He oozed a devil-may-care attitude that people didn’t really question. Like a good portion of the male-dominated punk/emo scene, Brand New’s work had a misogynistic air flowing through it. But recent allegations against Lacey revealed him as more than an obnoxious “bad boy”; chilling confessions from victims exposed him as a criminal, one who had physically harassed minors and solicited them for explicit photos. 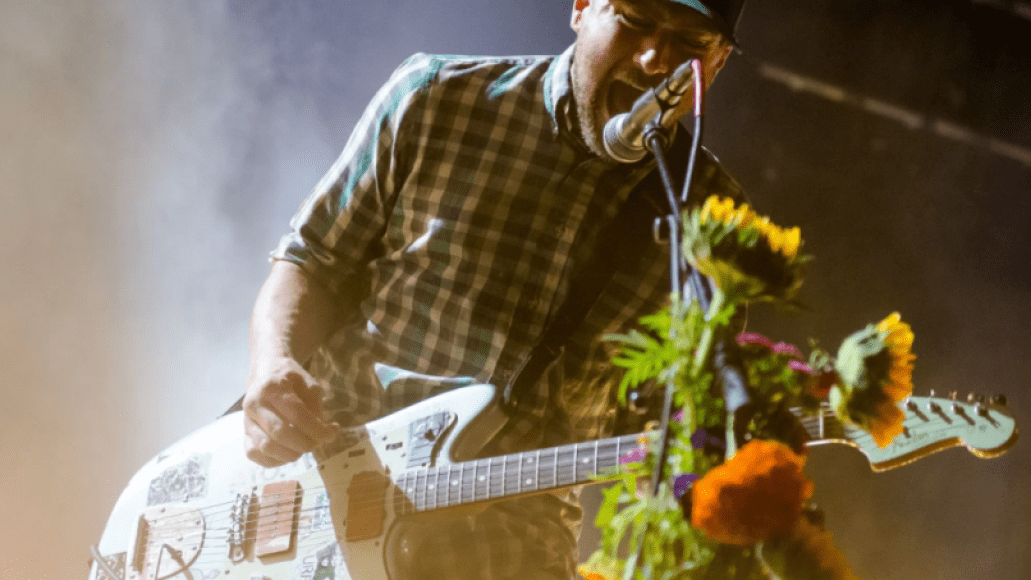 In her essay that followed these allegations, “Unraveling the Sexism of Emo’s Third Wave”, Jenn Pelly soberly points out that “…there is a correlation between misogynist art, the young people who make it, and the younger people who consume it. That is not a radical idea, and it strikes me now as dubious that any longtime Brand New fan would be completely shocked by these allegations.” She’s right — my understanding of Lacey after reading the vivid accusations reveals itself as a darkened and intensified version of my prior, shrouded assumptions. I used to justify Lacey’s severe demeanor and destructive words as brooding, raw emotion, but his lyrics read more clearly now: instances of manipulation framed as desperate desire.

Pelly refers to the song “Me vs. Madonna vs. Elvis” from their breakout album, Deja Entendu, as “the song that appears when you Google ‘Brand New date rape song.’” The chorus goes, “I will lie awake/ Lie for fun and fake the way I hold you/ Let you fall for every empty word I say,” which isn’t even the worst of it. “My tongue will taste of gin and malicious intent … A sober, straight face gets you out of your clothes.” I remember screaming this song as if it were an anthem when I would see them in concert, elbowing my way to the front of a male-dominated crowd that assumed my inferiority (the fact that we were all singing about it probably didn’t help my case). The layers that Pelly referred to (“misogynist art, the young people who make it, and the younger people who consume it”) were laid out in front of me — my oblivion was in good company. It was like we were all conned into some sort of emo pyramid scheme, and Jesse Lacey was the sleazy CEO. Still, my devotion to the band continued through my adolescence and into my young adult life.

Lacey was dethroned in my mind — from an emo icon to a sick man — the minute I heard what he had done. But the fact that years of rumors, questionable lyrics, and blatant headlines were met with silence suggests that Lacey and Louis C.K. (and most notably, Harvey Weinstein) were somehow seen as “normal” men. Understanding them as typical, flawed men in light of their crimes and transgressions indicate a disturbing string of correlations— that “normal” people are capable of such detriment and that this harmful disregard for women and our idolization of men in power is so ingrained in society that instead of being surprised by their actions, we deduced their “normalcy.”

I think we’ve come to accept a brand of highbrow misogyny, purely because it’s what we’ve been given for so long. A system of men in power and women catering to their status exists around the entertainment industry and within the entertainment itself. And this male-first model is just as pervasive in regular life. The sexual harassment stories we’ve recently become familiar with are those involving moguls and public figures, but there are countless stories of sexual abuse that don’t make the news. Every female-identifying friend I know has encountered some degree of sexual harassment, and most of them haven’t felt comfortable enough to speak out publicly. 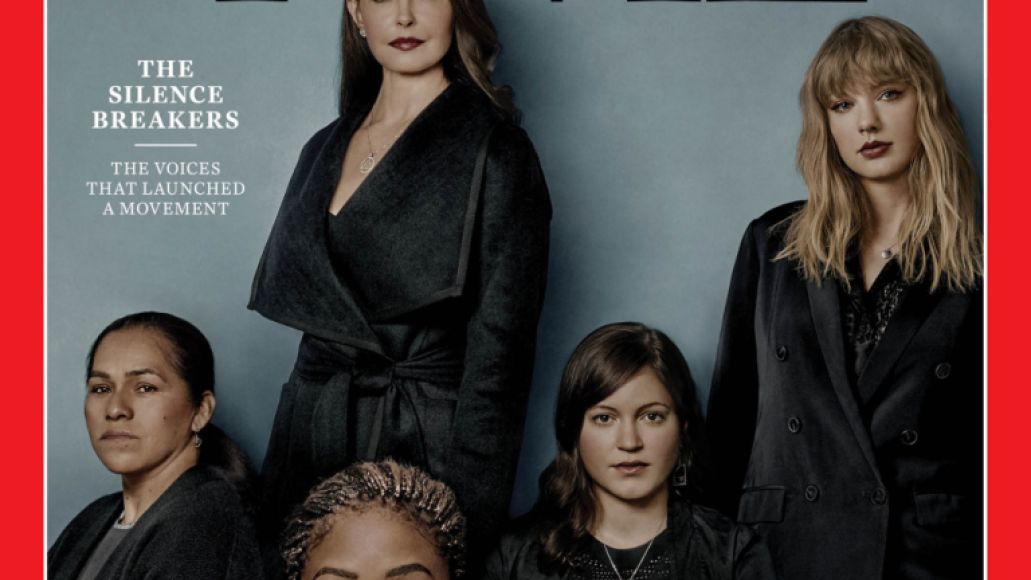 I feel that we are, however, on the cusp of progress — those who have been afraid to out their abusers, famous or otherwise, are being validated. The #MeToo movement has encouraged conversations about sexual assault among friends and family, or at least the ones you connect with on social media. Further championing this endeavor are the women who are finally revealing the horrible secrets of systemic sexual misconduct on Capitol Hill and in the current White House. That said, there are still people who deny and belittle victims, and there are those who don’t fully grasp the severity and ubiquity of the issue. Alongside them are the fans who shrug off the misogyny peddled by their favorite bands and stars. This is where I stood for years, in a state of naïve, indulgent fandom.

Having watched the power dynamics of punk and pop culture unfold, it’s clear that we need to drastically shift what we accept as entertainment and where we place our attention. In order to move forward, we must deal with the underlying causes. The outpouring of stories suggests that male privilege — whether in the sphere of entertainment, politics, or everyday life — is the foundation of sexual misconduct. Veteran journalist Kim Masters had spent years trying to out Weinstein, but the producer’s cultural cachet threatened anyone who might take him on; victims were afraid to speak out, journalists lacked concrete evidence, and members of Weinstein’s camp worked to protect him at any cost.

In a piece for The Hollywood Reporter, Masters asserts, “Until women are properly represented in front of and behind the cameras and in executive offices — and the statistics are grim — Hollywood won’t truly cure itself of this particular sickness.” On the receiving end of the Hollywood machine, it’s just as necessary for fans like me to recognize our role in facilitating its corruption. I won’t be revisiting my Brand New phase, nor will I be streaming Louie reruns. I won’t need to; these men will remain in the back of my head, urging me to notice the signs and listen to whispers that surround figures in power. I will instead look for artists that respect me and continue to use my writing to analyze the social impacts of music and entertainment. Progress can’t exist inside a vacuum; we must find ways to poke holes and let the light in.

We Won't Get Fooled Again: Staying Alert in the Post-Weinstein Era