Remember Ash vs Evil Dead? After its season two finale roughly 7,000 Sumerian years ago, it was second only to Outlander for mainstream relevance via the STARZ network. Horror hounds had welcomed back the character of Ashley J. Williams much more fondly than the fictional town of Elk Grove, Michigan. We grew familiar with the team of “Ghostbeaters” led by Ash (cult icon Bruce Campbell) which featured new characters to the Evil Dead universe: the no-nonsense grit of Kelly played by an always-game Dana DeLorenzo, loveable Ash-fanboy Pablo courtesy of the immensely likable Ray Santiago, and the back-and-forth demon reckonings of the ageless Ruby from “Xena” herself, Lucy Lawless. Callbacks to previous film entries were in healthy supply, satisfying longtime fans, while keeping it fresh with new buckets of blood to keep from solely relying on nostalgia.

So why the delay? We know that there was major behind-the-scenes turmoil during season two that led to a change of the guard, but we also know that season three wrapped in July of last year. Ash vs Evil Dead is a show tailor-made for the Halloween season. Why are we getting it a week and some change after Valentine’s Day? Granted, the five episodes made available to us feature various characters engaging in various forms of “romance” in both the past and the present, but the fact remains: this is one of the rare, true horror shows on television. Its release date is as perplexing as the Akkads releasing their last five Halloween films in every month but October. Perhaps the answer is as simple as “avoid Stranger Things season two. 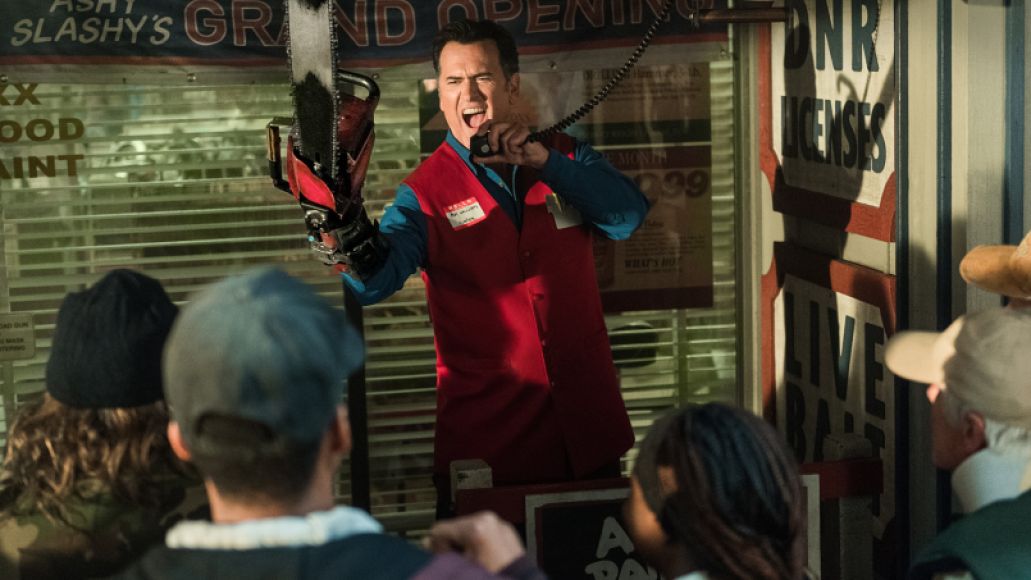 The minutiae of network strategizing can be as disgusting as Ruby biting off her own umbilical cord after giving birth to a demon baby, but we had to get that business out of the way. Now we can dowse ourselves with fake blood and participate in physical buffoonery. Ash vs Evil Dead is back, and its better late than never. There are new characters, new ways of hurting Bruce Campbell, and, most importantly, it’s dreamed up new scenarios to gross out its gore (ahem, core) audience.

After the bonkers, time-traveling escapades of season two, Ash has become a hero to the town of Elk Grove. He’s settled down in his hometown, moved into his dearly departed dad’s old house, and taken over his hardware store (which doubles as a “sex-toy emporium”). In addition to working at Ashy Slashy’s Hardware, Pablo has opened up his own food stand called “Pablito’s Fish & Chips.” Kelly, who left town at the end of season two, remains separated from her fellow Ghostbeaters, working as a bartender in another town. Yep, all is quiet evil-wise … and then the evil returns, with Evil Ruby not far behind. I won’t spoil too much, only to say that the way the scenes play out strongly resemble the Fistful of Boomstick video game from the turn of the century. 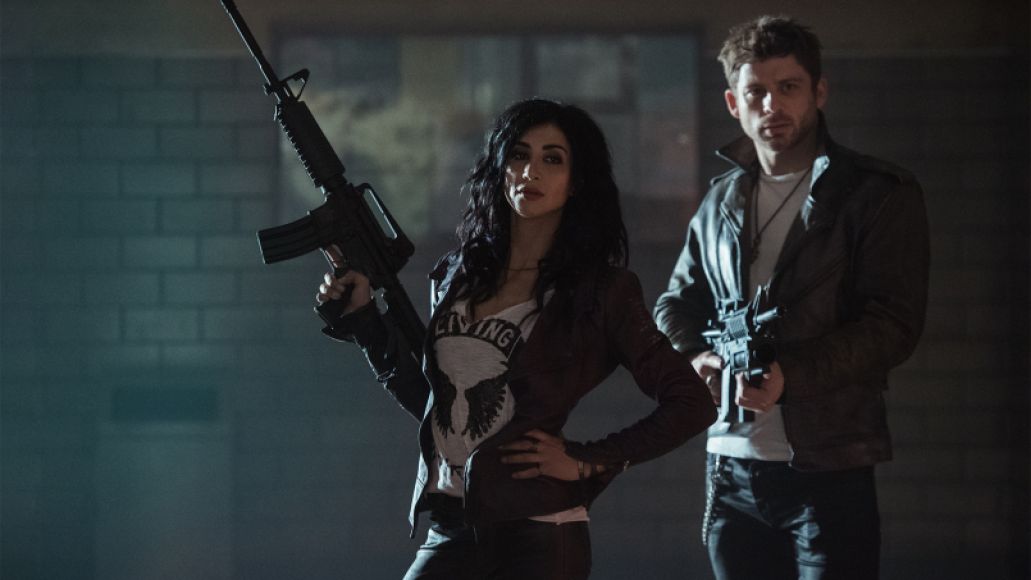 After Hell gets re-unleashed into town, Kelly returns … with a new hunk in tow. His name is Dalton (Lindsay Farris), and his backstory is connected to Ash’s legend. The character seems … rather superfluous through five episodes. For a half-hour show with six main characters, it’s tough to find room for everybody, and I’m not sure how long Dalton will last. However, there is plenty to do for the other new member of the cast.

If one could find a specific theme for this season in a show completely content with hero moments, catchphrases, and blood (so much blood), then parenting would be a strong contender. Ash has to contend with both news of a daughter he never knew existed in Brandy (Arielle Carver-O’Neill, who could physically pass as Campbell’s real-life daughter), as well as a demon child brought forth by a marriage of Ruby’s blood and pages of his prophecy in the Necronomicon (this will make sense when you watch it). 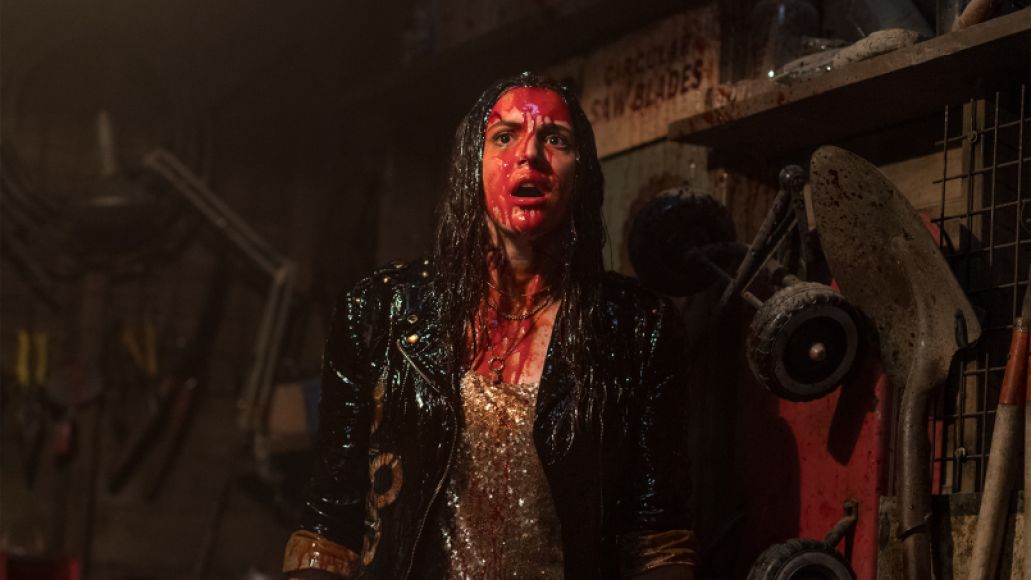 The dynamic between Brandy and Ash works thus far because while everyone in town worships Ash, she still sees him as the “chainsaw geek”. Circumstances force the two of them to get closer than maybe either would have ever wanted. Ash is actually trying to be a parent, but having Brandy shack up in his deceased sister’s creepy bedroom isn’t helping the bonding session (“Rise and shine!”). Their relationship is made more complicated by Ruby masquerading as Brandy’s guidance counselor, and main confidante.

And Lawless has a lot to do this year as Ruby. She’s got schoolwork and her aforementioned demon child is growing rapidly. The latter motif isn’t new to storytelling, but the lengths to which new showrunner Mark Verheiden goes with the idea is often exciting/grotesque/hilarious. If you thought Ash entering the body of a corpse via its sphincter couldn’t be topped, wait until episode five. What happens is wrong in so many ways. It’s wonderful. 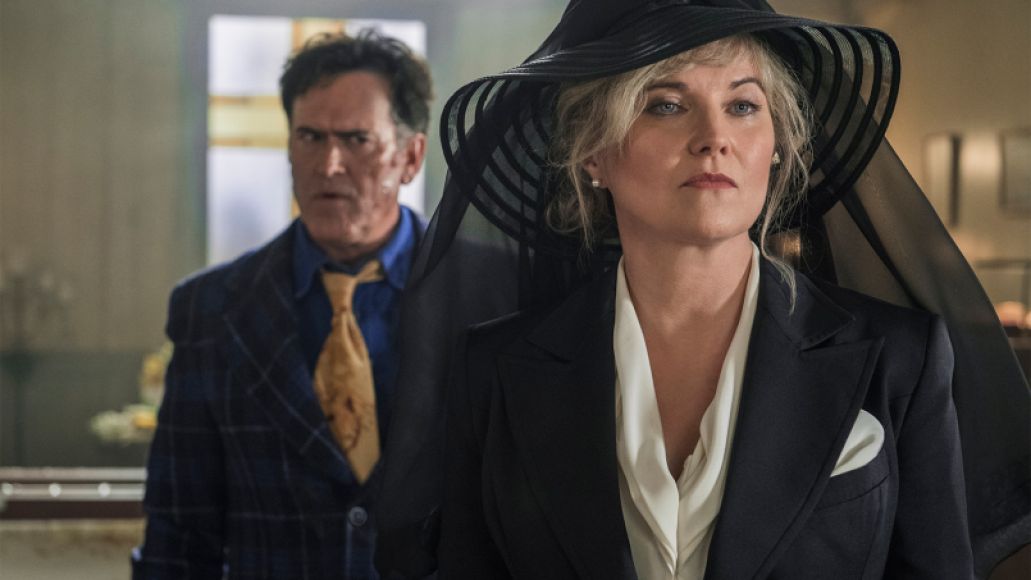 What doesn’t work at a 100%-clip is Pablo’s constant battle with what are quite literally his inner demons. This drove much of the second season, but begins to feel a little redundant right off the bat in season three. Santiago’s commitment to the character and his strife are never in question, but the writers’ commitment is. They’re already repeating beats and its only the third season. There is a shift at the halfway point in the character, so perhaps the payoff will be worth it come series’ end.

Characters are wonderful, but we’re here for two things: Ash and horror. The various directors continue to keep in line with Raimi’s tone. The more successful horror bits come in a band room and a coffin. The comedy shines in a sperm bank (yep) and funeral. You want strange POV shots? In addition to the now-classic POV of the evil itself, keep an eye out for the POV of a violin. Maybe more than one. Advertising for the show this season has been heavy with the high school angle, specifically a demonic mascot (to quote Ash: “Cougy! They got you, too!”). While high school plays a big part in the premiere, it’s definitely more focused on the surrounding town in the episodes that follow. 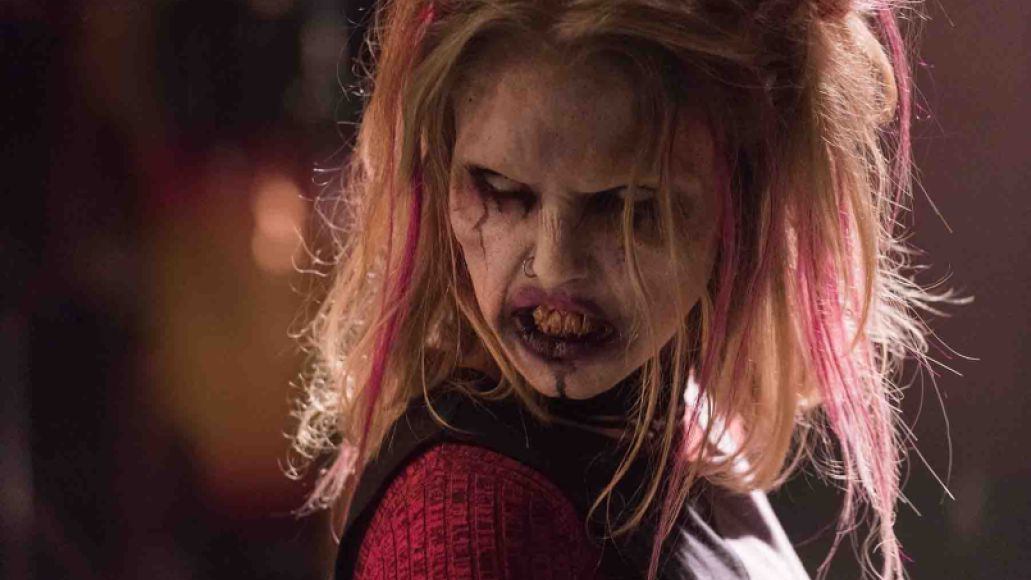 Practical stunt work and effects remain the show’s calling card. Despite the positive response to the first season, a major criticism was on its overreliance on CGI. While the CGI remains, Ash vs Evil Dead now relies mostly on practical special effects with solid, non-obvious CGI in spots. There is nothing worse (in horror) than CGI blood. The production team has recognized this, and mercifully continues to walk away from it. This makes it more difficult for the performers at the end of the day, but I’m sure Campbell can give enough tips in how to wash up all the corn syrup. 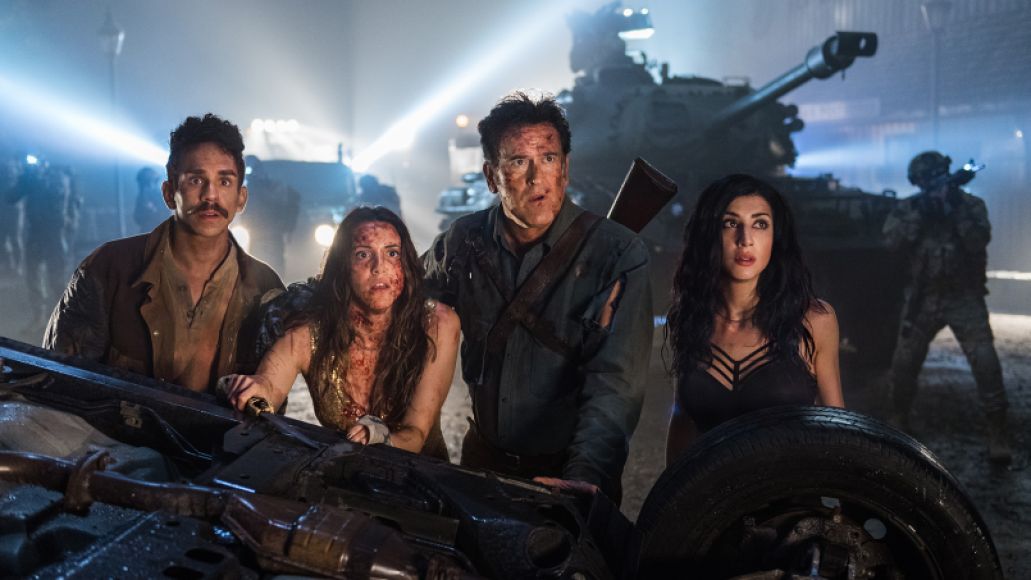 Ash vs Evil Dead continues to be one of the more successful revivals during this revival-saince. Season three could very well be its farewell (Starz isn’t saying), but to have received 15 hours of more Evil Dead is something no fan could ever have dreamed of. Kelly says it best: “Ash may be a perverted drunk with racial tendencies, but he has his moments.” Buckets of them.

Ash vs Evil Dead Conjures Up Deadites, Daughters, and Semen for Its Wild Third Season