Earlier today, Smashing Pumpkins announced a reunion tour featuring three of the band’s four founding members: frontman Billy Corgan, guitarist James Iha, and drummer Jimmy Chamberlin. Not included, of course, was D’arcy Wretzky, the band’s founding bassist, who has been engaged in a vicious back and forth with Corgan since alleging that Corgan lied to her about her involvement in the reunion. Wretzky has said Corgan promised that she would be involved in all aspects of the reunion, only to later rescind the offer and claim that the other members didn’t want her to take part in it. Corgan contends that Wretzky “always deferred” overtures “to participate in demo sessions, or at the very least, meet face-to-face.”

Whereas Wretzky went off on Corgan in an explosive, tell-all interview, the Smashing Pumpkins frontman has remained conspicuously silent. Instead, Corgan’s friends are the ones fighting back.

On Tuesday night, Corgan collaborator Linda Strawberry went after Wretzky in a series of messages posted to an unofficial Pumpkins Facebook page. “No one knows what state she really is in. The things I have heard from people near her have been worrying me for months,” she wrote. She then mentioned the existence of a “horrific photo.” 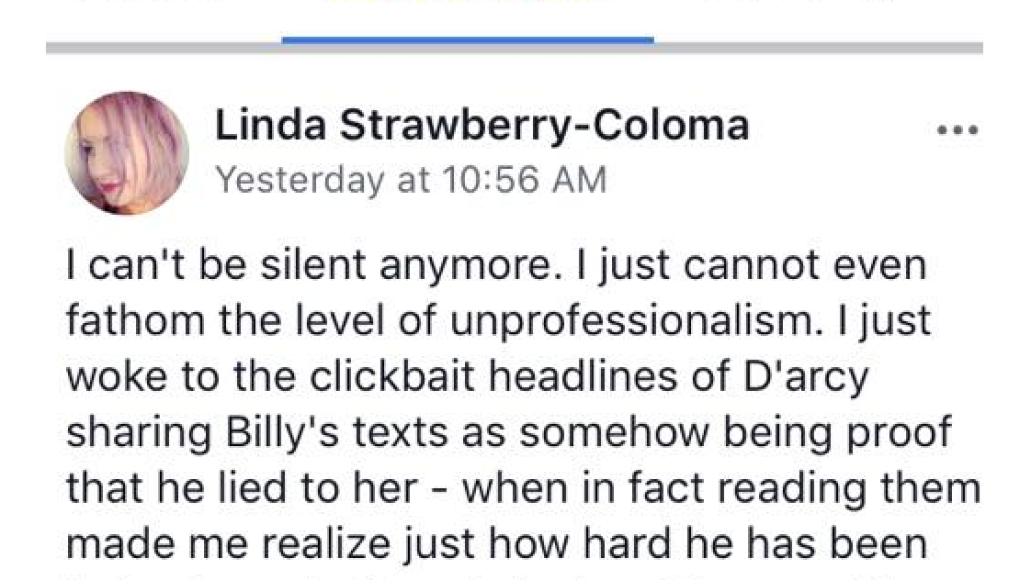 A few hours later, Corgan’s longtime friend, Chicago radio DJ Mancow, posted that very photo to his Instagram account. “Can you guess who this battered former rockstar is?” he wrote in the photo’s caption. (Editor’s note: We’re choosing not to publish the photo.)

After the photo was widely distributed on Smashing Pumpkins fan forums, Strawberry clarified that it was taken after Wretzky was assaulted by a former assistant. “Patrick [Wretzky’s boyfriend] cleared that up saying she was assaulted,” Strawberry remarked. “I’m only saying that because so much talk has been about this photo. It was a private nightmare and everyone should move on.”

“The band has had zero drama,”” Strawberry added. “Everyone is focused on their work and their families. It has been calm. I think everyone wants to move on. Most of us are older and have families and children etc. I think the best thing is to have empathy and just refocus on the music.”

We reached out to both Strawberry and Mancow for comment, but neither responded as of publication.

In a recent interview with Alternative Nation, Wretzky stressed that she is sober, explaining, “I got to the point where I found the right medication for me and didn’t need [drugs] anymore. I’ve never been addicted to anything.”

“I’m in better shape than any of them,” she went on to say. “My mom was a health nut, and she taught us about eating healthy. I eat totally clean, I live and work on a farm. I had messed my shoulder up, because I pushed myself too hard. I’m maybe a hair shorter than James, and I’ve done just about every sport. We’re all very athletic in my family, I’m Russian and Danish. I was a gymnast, and I still like to work out. I like to do martial arts, I like to train horses, I like to build fences, I like to build stuff. I’m a very active person, I’ve also been really strong. I was a grotesquely skinny little kid, but super strong, weirdly. But I’m way healthier than any of them.”