The clock on the Smashing Pumpkins’ website is ticking down to some big news on Thursday, widely believed to be official confirmation of Billy Corgan’s reunion with guitarist James Iha and drummer Jimmy Chamberlin. The band’s fourth founding member, bassist D’arcy Wretzky, is not participating, however, despite making amends with Corgan last year. Wretzky previously called her omission from the reunion “a huge disappointment for me.” Now, in a new interview with Blast Echo, Wretzky reveals why and how she was cut out.

Wretzky has shared a series of text messages allegedly sent between her and Corgan regarding the band’s planned reunion. The first messages dates back to mid-January, around when Corgan began teasing the recording of new music with Chamberlin. When Wretzky reached out, Corgan told her not to worry, noting that Iha “isn’t here either.” “It’s me and Jimmy working and [guitarist] Jeff [Schroeder],” he explained.

At the time, Corgan told Wretzky that the plan was to only record one song with producer Rick Rubin as opposed to a full-length album. He also assured her that Iha was “focused on his stuff” and was not involved in the song’s recording. However, subsequent Instagram postings indicate Corgan and Chamberlin spent at least a week at Rubin’s Malibu recording studio and, as recently as this past weekend, Corgan mentioned the existence of 26 songs. Additionally, leaked images from a photo shoot showed Corgan and Chamberlin together with Iha, and Corgan himself posted a photo of Iha in the studio.

For her part, Wretzky claimed she was initially presented with a contract for her involvement in the studio sessions, only to have Corgan rescind it. “Well, that wasn’t a real offer,” he allegedly told her. She only learned about Iha’s appearance in studio when fans did. Once that news got out, Corgan reportedly texted Wretzky to clarify:

“as far as you not being involved, there was never any decision to shut you out, or make you not welcome. It’s more about getting on the same page with [the] tour first and then the necessity of the song came up… so focus on [the] tour and I think we can find the right way to have you involved. I know speaking with Jimmy, he wants you involved so that the tour is the best thing we can all give the fans and build for the future.”

It was only after this that Wretzky’s contract was pulled. Corgan apparently told her via email that Iha, with whom she’d remained in touch with since the band’s split, and Chamberlin were both “with him” in deciding to exclude her from the reunion. “I am totally disgusted with James,” she told Blast Echo. “He should be ashamed of himself.”

Wretzky said she wasn’t entirely sure why she was cut out of the reunion, but added cryptically, “That is a whole other can of worms and a big, ugly one! Another time.”

On her Facebook page, Wretzky posted a link to her interview with Blast Echo. In a subsequent post, she shared another message allegedly sent by Corgan: 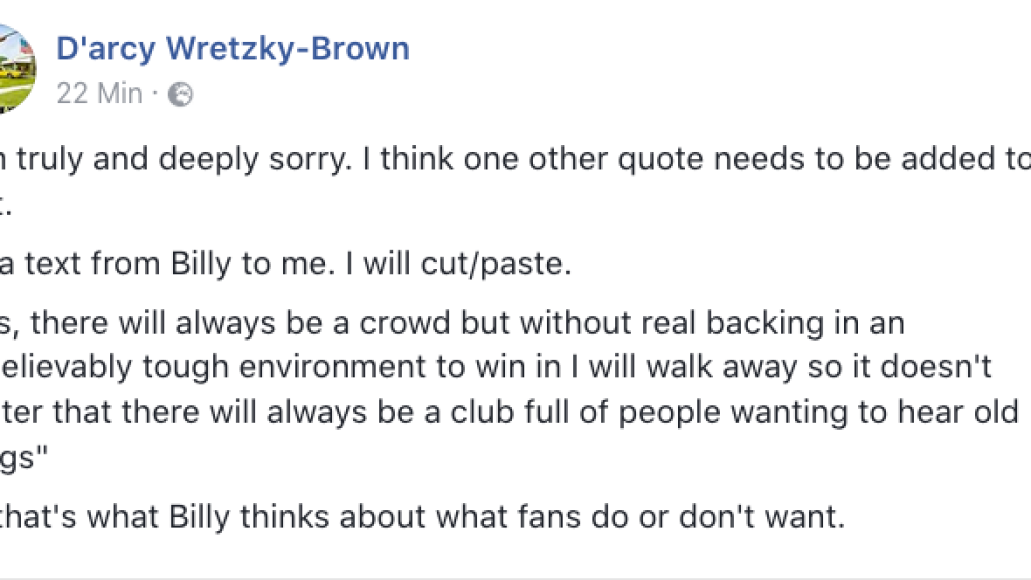 She also responded to several fans in the comments section. When one fan called the project a “mess” and said, “I don’t want to follow that project anymore!” Wretzky responded by writing, “Yeah, I think people might be getting sick and tired of being manipulated by Billy.” In another response, she wrote, “Billy’s ship … which keeps sinking every time he tries pulls this ship. I abandoned it in 1999 cause I knew it was sinking. He was beyond helping. His ego & insecurities spun out of control and I could no longer reel him in, which had been a very large part of my role for many years, but it was hopeless.” 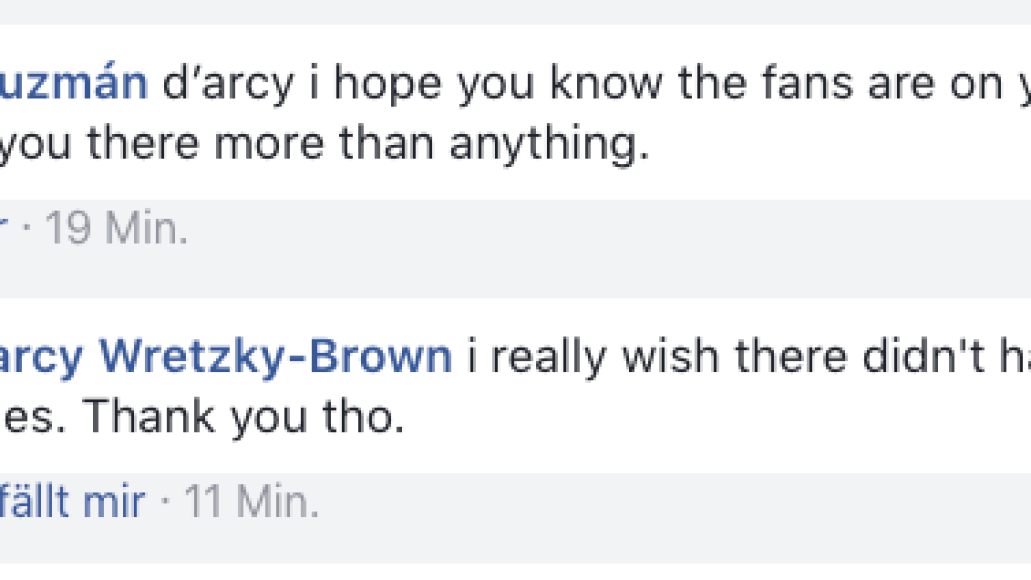 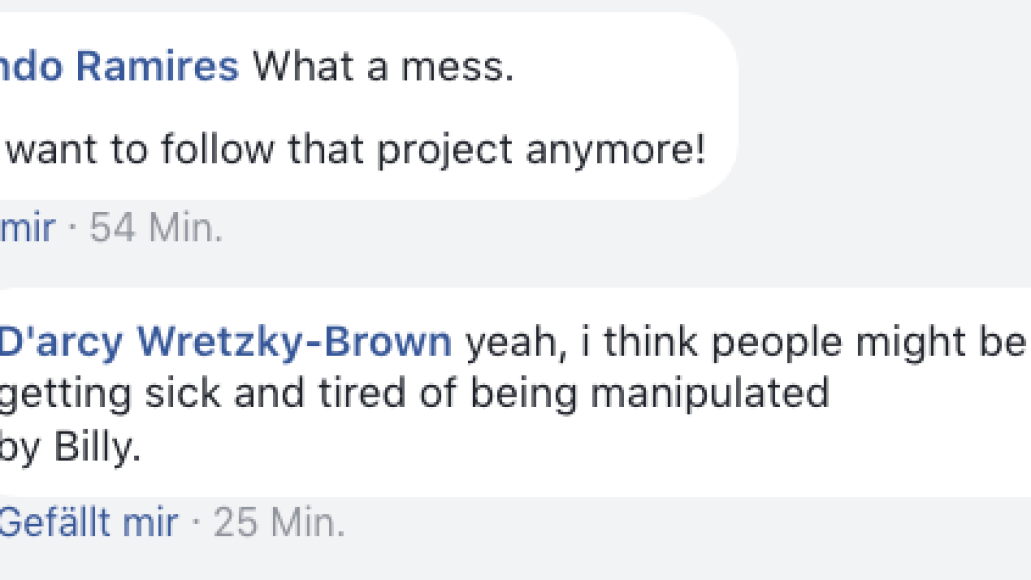 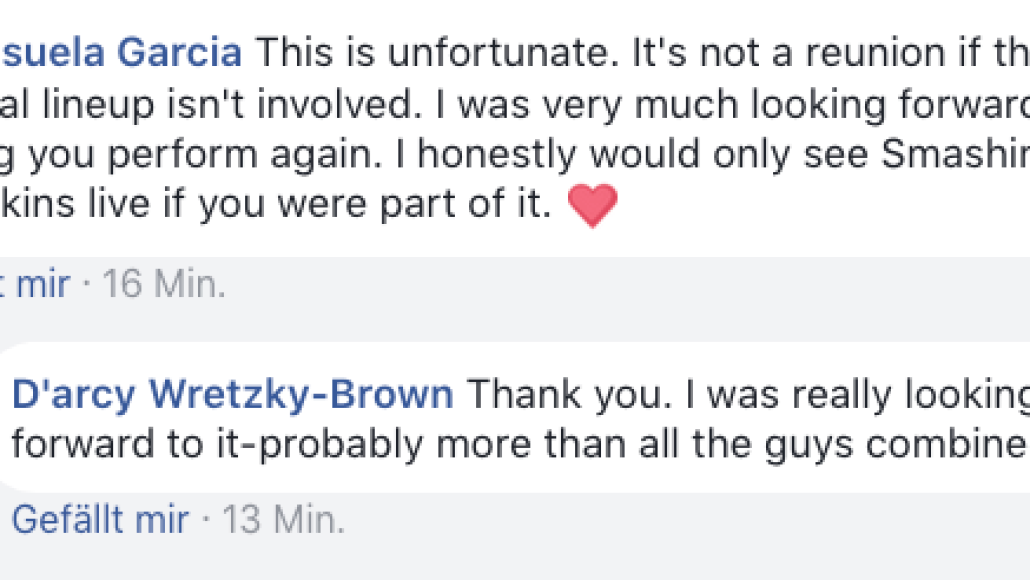 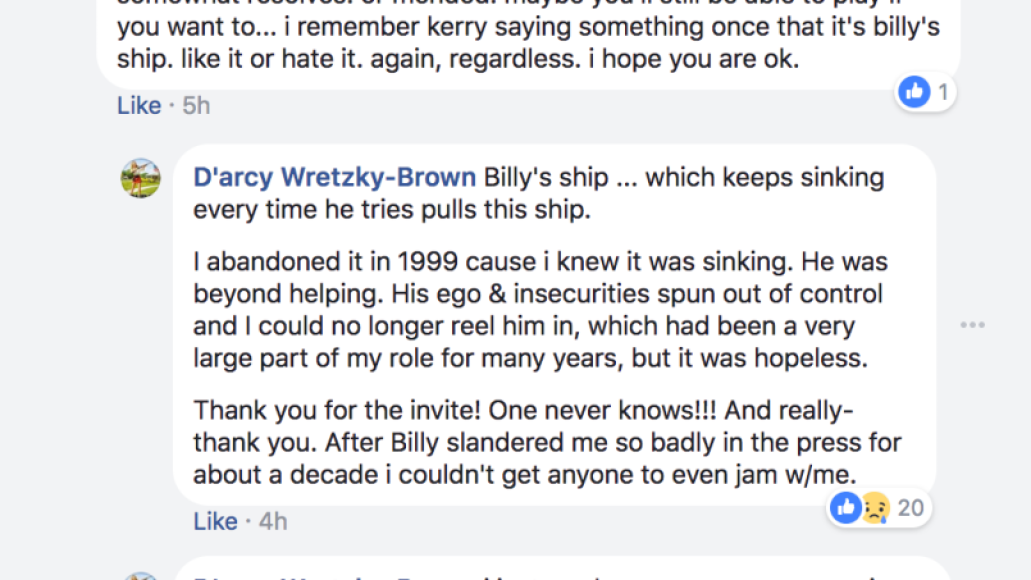 For his part, Corgan appeared to take a shot at Wretzky in an Instagram posting last week. In explaining Iha’s role in the newly reconfigured Pumpkins, Corgan said he hadn’t “seen him pick up a bass since Machina (which he played a fair share on, despite reports claiming a certain ‘flaxen Saxxon’ did; and as you know with much that is written is patently f-a-l-s-e).” (To translate: Corgan is saying Wretzky, referred to here as a “flaxen Saxxon,” does not deserve credit for Smashing Pumpkins’ 2000 album, Machina.)

We’ve reached out to Smashing Pumpkins for comment, but one thing is abundantly clear: The reunion isn’t even being announced for another four days, and already it’s a giant clusterfuck.