Track by Track is a recurring new music feature that gives an artist the chance to go into deep discussion about their latest album.

Electroclash duo Fischerspooner returned with their first new album in eight years, Sir, earlier this month. The record finds the duo as erotically charged as ever, even as it tells a personal story about the end of singer Casey Spooner’s 14-year relationship. It explores Spooner’s “re-entry into the sexual playground now defined by technology, but also the muddled ways that feelings and self-image are present in that experience” while simultaneously examining the years of “emotional and sexual turbulence” he experienced with his ex-partner.

Though the songs may be intensely personal, Spooner wasn’t making this self-analysis alone. The entirety of Sir was co-written and produced by R.E.M. legend Michael Stipe. BOOTS also provided additional production, but was the work done in Stipe’s Atlanta home alongside Andy LeMaster that really set the pace for the record.

In a press release, Spooner described his relationship — both profressional and personal — with Stipe:

“Michael Stipe encouraged me to be more emotionally connected and to trust my voice. He also fought for a more raw vocal in the final production. He taught me new ways of creating melody and lyric. He was more than a producer. He was a mentor and a great friend who guided me through troubled times and captured my experience. He lifted me up at my lowest. This album is a document of that experience.”

Listen to Sir below, and purchase it here.

For greater insight into the record and its creation, Spooner has broken down the Sir Track by Track.

One of the things that’s amazing about this song is that most of it was recorded in a single take, and it was the first take. The spine of the song is really just an intense, emotional document of an affair that had just ended. I had gone to Madrid for a week and it turned into a month because I ended up having an affair with a man and moving in with him. We met online on the same day that I had just done a photo shoot with Vincent Claudio Urbani, and he shot the tongue image that turned into the album cover. The man I had the affair with had been a master in a dungeon for 10 years and he very spontaneously pulled out whips and proceeded to whip me. And it wasn’t anything I’d ever done before or had shown any interest in but what happened was it triggered a lot of intense feelings of comfort, because when I was a child my father used to whip me with a leather belt. And because of the timing (I was in a very emotional, post-break up state) when this man whipped me it all of a sudden gave me all these associations of comfort and of someone taking care of me. And so from that experience we ended up bonding, and having a very intense friendship.

TopBrazil is about the dark side of sexual compulsion and the internet. Specifically it’s about an experience I had in Rome with a super hot Roman college student who snuck me into his home while his parents were sleeping and we had this amazing awesome epic incredible illicit night of sex. And the next day I got greedy and thirsty and hungry and I wanted it again, but with another person. So I went and I hooked up with this guy and his profile name was TopBrazil—and it was a nightmare. He was an awful person, he was weird and awkward and rude. The whole experience was terrible. I don’t know why I stayed and I don’t know why I went through with it.

There’s a line in “Togetherness” that is a quote from Jeff Koons: “The deeper you go, the darker it gets.” I saw him in conversation in Los Angeles with John Waters and I really connected to that phrase, so the song was built around that quote. There is a section in the bridge–a very small section but an interesting section–that talks about teeth and has this kind of animalistic quality. That section was written on a sex app in collaboration with a stranger! I wrote a line, then he wrote a line, then I wrote a line, etc.

“Everything Is Just Alright”:

I loved the way this one was written. The song is really a clear collaboration between Michael and me. I was walking on 14th Street in New York, and I walked past Nowhere Bar so that section “I smell the smoke, I smell the piss, I smell the anger” is all about a seedy New York club. Then Michael, he really brought in all the ideas of the motorcycle and this kind of opening up of this expansive landscape that he put in the center of the song. This is one of the songs where Michael really steps in and we do a co-write back and forth and it includes a great vocal cameo from him in the bridge.

I spent two summers on Fire Island and I came to appreciate really really big summer pop hits and decided that I wanted to write a summer pop hit that was also super queer and built for the dance floor, built for Fire Island. I was really inspired by Ariana Grande’s “So Into You.” I loved that song and I loved the sorta innate sadness that was in it. The idea was to write a song about polyamory and about encouraging your lover to go out and have fun with you. And that you would always be there waiting for them to come home and tell you everything that happened. No fear. No shame. No jealousy. Total trust.

This song is about healing, about walking away. One of my favorite lines–Andy LeMaster wrote it–is “The more you fall, the more you learn to feel” so it’s kind of like marching away from a painful relationship. “This is love, this is not not love” is another important line in the song, and it is advocating a non-traditional, sexualized romanticism because it’s not love, but not not love, so you’re having these emotional connections that are situated outside of the preconceived notions of love. 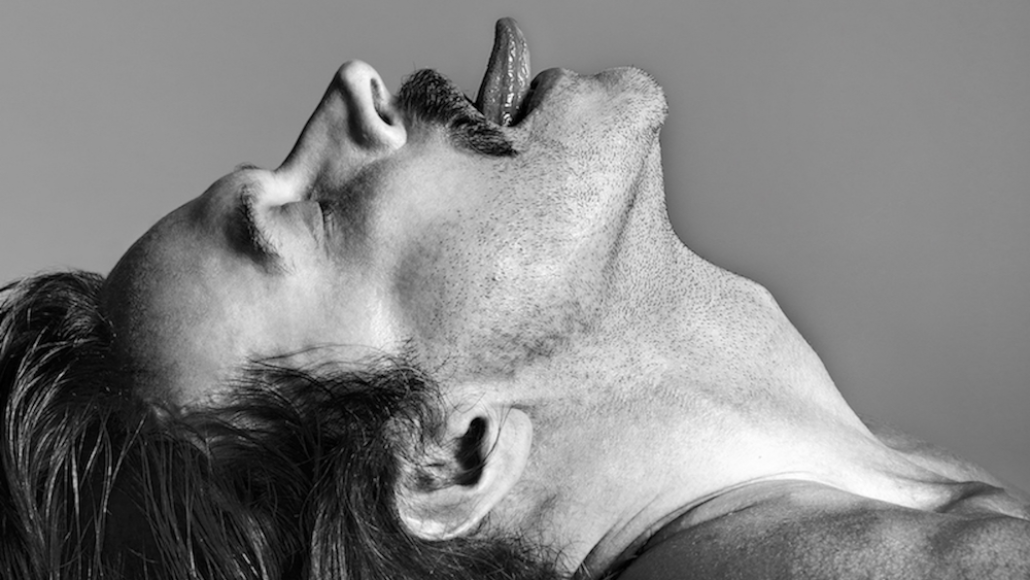 The night we wrote this song, I specifically remember that Michael, Andy, and I were having a conversation about the first time Michael and I met. We were talking about meeting on the dance floor, and Michael wrote the very descriptive line “Broke down hair, better shoes than mine” and I knew he was talking about me because I had a very weird haircut when we met.  I had cut my hair in this Prince Valiant bang that I cut in a reflection of a toaster in my dorm room because I was trying to grow my hair out and it was driving me crazy. I had just chopped my bangs, and Michael noticed me because I had this really weird hairdo. The song ended up becoming a collage of different experiences and about the notion of desire when seeing someone from across the room. It’s about desire on the dance floor.

My relationship to writing this song is different because this was one of the last songs that was written, and it was really Michael and Andy going off and doing their own thing. I wasn’t really involved in the writing, but I can speculate that Michael is talking about my personal life. He is projecting and reinterpreting certain relationships. At this point in the writing we were all so close they could easily write for me, about me, as me. I became a mask. It’s about the dream of Los Angeles.

This thing happened later in the writing process where Michael started writing for me, as me. At times, he was able to say things that I wasn’t even able to articulate for myself. In this instance, I had been going through a very intense relationship with an incredibly hot younger man. But it was this kind of tortured stoner abusive cycle of amazing make up sex relationship. We were constantly breaking up and making up. It happened so often I lost count. Maybe 20 times?! Michael took that and translated it into this bizarre abstract language. I somehow knew it, so I projected all the pain and all the kind of tortured pleasure into that song, and it turned out to be a portrait of a very sweet but very troubled affair.  Still miss that crazy bitch.

A lot of that was Andy’s writing and to me it’s about an abusive relationship and the lyric “dark pink” I always interpreted as a bruise. In a club in a dark room there’s confusion and there’s jealousy, someone’s getting hit and someone’s getting hurt. It’s about trying to get out of an abusive relationship. I think Andy has some explaining to do!

This is the most painful and most personal song on the entire record and it really is a document of a big relationship ending. Recording it was very difficult. I was weeping on the mic while we were writing it and it’s a portrait of the end of one the most important relationships of my life. I tried to talk about that confusion, to talk about that pain and share all of those feelings of losing something that you thought would last forever.

“Oh Rio” is the thesis of the album and it sets up many of the core themes. It’s also the song that convinced Michael Stipe to produce the record. The title comes from the Bruce Weber book “O Rio de Janeiro.” When I was growing up in a small town in the South I didn’t have access to any kind of homoerotic material–not that I knew that’s what I wanted–but I wasn’t exposed to anything homoerotic except for this one book that was in this one bookstore at the mall. I would go visit, and this book never sold, it was always on the shelf. So I would go look at this book and get excited and turned on and confused and freaked out and scared and put it back on the shelf, which kind of built this erotic fantasy landscape in my mind and created all these associations with Rio that somehow my sexuality existed in this foreign land somewhere far far away. In 2014 I finally went to Rio. It was a disaster. Since it was March and I was coming from winter in New York I was not in great shape. I was old. I was fat. I was tired. I was sick. And I got to Rio and it was the end of summer so everyone was hot and amazing, sexy and incredible and basically I had put myself in this crazy situation where I ended up in my sexual fantasyland and I was not beautiful or happy. It was me confronting my dreams and having them collapse before me.

Fischerspooner give a Track by Track breakdown of their latest album, Sir: Stream