Track by Track, our recurring new music feature, finds an artist offering a complete rundown of their latest record.

Vundabar are set to release their third full-length album, Smell Smoke, on February 23rd via their own Gawk Records. Ahead of the release, the entire thing is streaming below.

Smell Smoke follows 2015’s Gawk, which the Boston duo re-released last year. The new effort is the jagged indie outfit’s earnest attempt to give shape to the emotional turmoil singer/songwriter/guitarist Brandon Hagen has experienced in recent years. Much of that time found him caring for an ailing loved one as they fought against a serious illness. As he wrestled with the pains he tried so hard to suppress, Hagen’s music helped him recenter himself and find enough acceptance to begin moving forward once again.

As he explained to Uproxx,

“I was talking about it with my mom the other day, and I was just like, ‘Oh, it’s great! I got to like consolidate it all down into this record and here it is and now I can move on.’ It’s just a way to put it into something and be like, ‘That’s there, I can do other things now.’ In a way, there’s so much about music that is also abstract and untouchable, unseeable, sort of unknowable. It can address what you don’t actually have the capacity to express. For me at least.”

Take a listen below (via Hype Machine). (Note that you may need to tell your browser to allow the Flash script to view the embedded player.)

Our latest Track by Track provides an even deeper look into how Hagen used songwriting as way to resolve all of his tumultuous feelings in the face of sickness and loss. Read on to see what he has to say about each of the new songs.

“Acetone”:
This song explores the ways in which a sense of self can become fractured and compartmentalized. When I imagine the song visually I see the character adapted for the music video; some clown acting with over-blown ostentation and bravado, desperately trying to evade and detach from the a reality far more glib than the performance he gives. In the back of his mind he knows the levy dividing those realities is breaking and when they intersect it hits him like a shovel to the head, hence the video’s plot.

Harvest”:
Harvest is a song about sickness. I wanted to create an epic space out of something small, pieces of memory, a bowl of untouched spoiled fruit. I feel like that’s the duality of something like sickness, it’s small and meek and often behind closed doors, but those unseen moments can become a world in and of itself for those experiencing it. I wanted to sit in it and acknowledge its largeness.

“Tar Tongue”:
Tar tongue follows a character whose mouth leaks tar. As the character walks into deep woods with the intent of self preservation/avoidance his tar trail inadvertently creates a road. A mall and high-rise is developed on that road shortly thereafter.

“Tonight I’m Wearing Silk”:
“That’s when I reach for my resolver.”

I wanted to use this restructuring of a Mission of Burma line to create a sort of then-and-now retrospective on the language of american morality, and how our vernacular of goodness has historically usually been the justification of resource consolidation, imperialism and exploitation. Because of this a word as innocuous as resolver holds the same implicit signification as revolver. To avoid this thought the song’s protagonist does whatever he has to; swallows stones (Cronus), hits those gin drinks, lives in an ivory tower made of teeth, all to shirk around his own baseness and preserve a reality upheld by vacant signifiers. By the end language sort of breaks down and he’s speaking in nursery rhyme-style.

“No People To Person”:
Q: Do you think cockroaches can drive cars?
A: They cannot

“Big Funny”:
This is mostly snippets of imagery and memory of the last few years. The song was prompted by a joke (non-joke) between myself and a relative about how a funeral would be cheaper than to try to beat a chronic illness given our healthcare system in the states.

“Diver”:
Diver’s just a bit impressionistic. I wrote it in about 15 minutes. Some songs are like healthy bowel movements in that way; quick and done with ease. 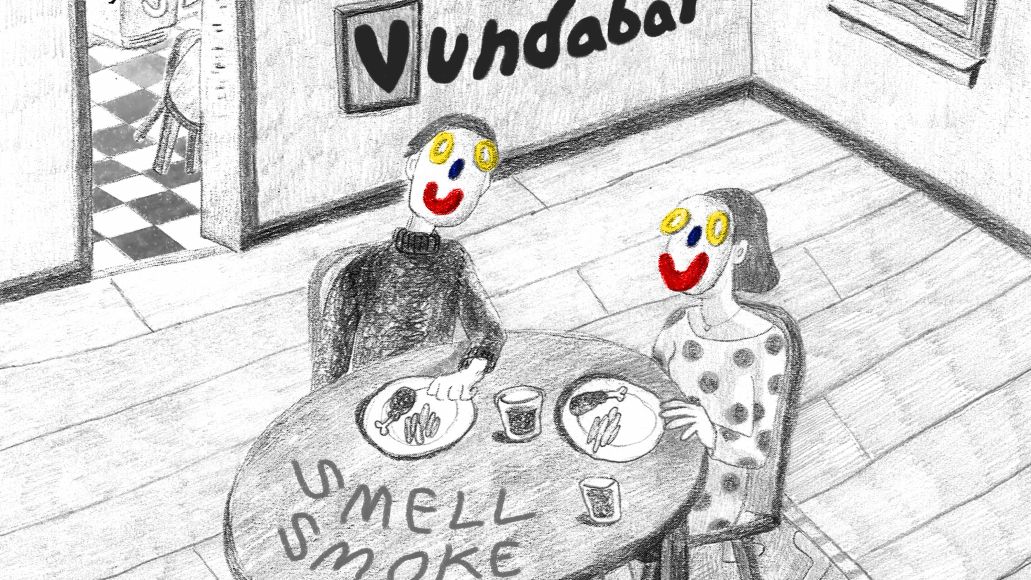 “$$$”:
Some of the themes on this record are: the intersection of love, relation and capital, the tangible and intangible, futility, the breakdown of language, illness, and how all of these might intersects to create a feedback loop and repeat/intensify certain cycles. I think the instrumentation of this song sort of matches that reflection on cycles in the record. It’s repetitive, it drones on, until it climbs to a fever pitch, repeating the same thing at double time until the song unravels and comes to an abrupt end. hey but who knows i just play the tunes

“Hold A Light”:
Written on the spot at the Head Room in Philadelphia. Vundabar goes country and old soul Hagen revisits swampy origins.

Vundabar give a Track by Track breakdown of their new album, Smell Smoke: Stream