Track by Track is a recurring new music feature that finds an artist pulling back the veil on their latest record.

Connecticut rapper Apathy has been a fixture in the underground hip-hop scene since emerging as part of The Demigodz over two decades ago. He’s remained as prolific as ever in recent years, releasing a collaborative album, Perestroika, with legendary East Coast rapper O.C. just last fall. This Friday, Apathy is back with his latest solo LP, The Widow’s Son.

The full-length reflects the mutual respect Apathy has earned from his peers over the years, featuring production from the likes of DJ Premier, Pete Rock, Buckwild, and Nottz, as well as guest verses from Pharoahe Monch, M.O.P., A.G., Celph Titled, and more. Over the course of the album’s 14 tracks, Apathy delivers punchline after punchline over hard-hitting beats as if he still has something to prove.

The Widow’s Son is about more than dope rhymes, however. Apathy taps into themes inspired by his dedication to Freemasonry throughout the album while following the lead of classics such as A Tribe Called Quest’s Midnight Marauders and Wu-Tang Clan’s 36 Chambers.

“[Freemasonry is] about being a better man, doing positive things, and making the most of your life,” Apathy explains. “I wanted this album to create a cohesive feel, and have its own energy. The album as a whole isn’t purely focused on the order, but it does have heavy themes that do focus on what it’s truly about.”

Prior to the release of The Widow’s Son on March 2nd through Dirty Version, Consequence of Sound is sharing an exclusive first listen. Check it out below, and pre-order it here.

To give insight into the making of The Widow’s Son, Apathy breaks it down track by track below.

“The Spellbook”:
Creating a vibe or a feeling has always been the most important aspect for me when making a song. I had all these random samples that sounded spooky and chaotic, and I wanted to convey that vibe. As soon as the beat was made, I knew this was how I was going to start the album.

“CHAOS”:
Stu Bangas produced this. Every time I work with Stu I know the track is gonna be hard. This is just me flexing on some real emcee shit. That’s the era I grew up in. Murder the mic… death to wack rappers. Those were the rules.

“Never Fall Off” feat. AG & DJ Mekalek:
Showbiz & AG have always been one of my favorite groups of all time. They seriously personify real Hip-Hop. When I wrote the first verse and came up with the hook, I knew I wanted AG on it. This is just us confidently bragging that we never fall off.

“The Widow’s Son” feat. Ryu:
Having a title track is important to me. I knew I had to come with something high energy. I had an earlier demo version of this with a different beat, but it wasn’t working, so I had my DJ, Chumzillla, remix the track. Ryu and I are both Freemasons and we wanted to dispel myths and drop some gems. 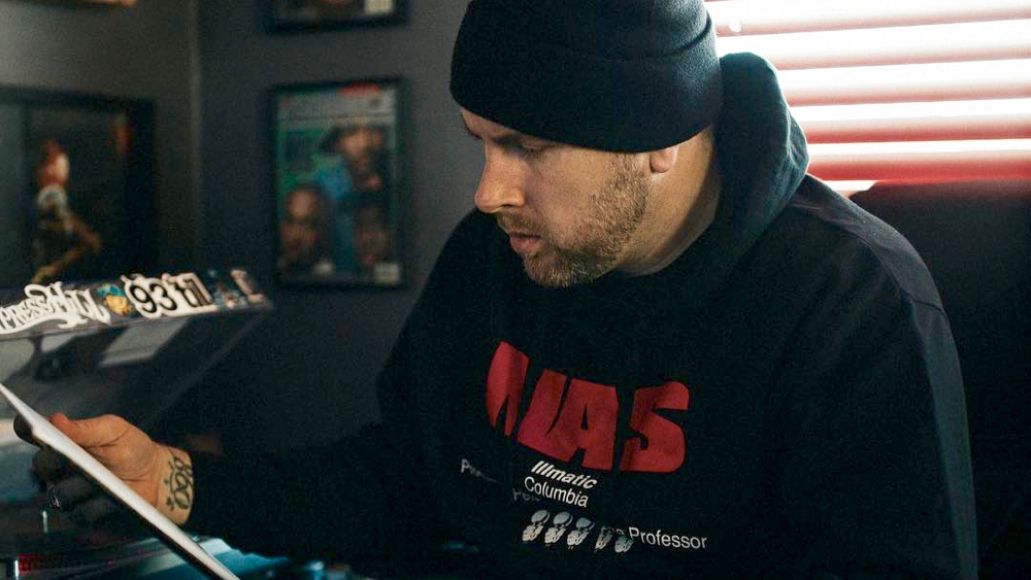 “The Order”:
DJ Premier and Pete Rock are my favorite producers of all time. Premier and I are actually friends now, but it’s still surreal every time I work with him. We had a completely different beat initially. I told Preem an idea I had for the beat, but it just wasn’t right. I told Preem, “Let’s start over, but you do you. I want a PREMIER beat… just do you.” And that’s what Preem does best. You can’t fuck with his process.

“Alien Weaponry”:
I think Nottz is one of the most mind-blowing, genius producers ever. He is a savant. I’ve never seen anyone bend samples to their will the way he does. Nottz posts mad beats on his Instagram account. I was off touring and heard this beat on the tour van and just freaked out. I called to lock it down. I had an earlier version where the hook was more cluttered. I sent it to my homie Evidence, and he told me I should let the hook breathe and keep it simple. It became one of my favorite songs on the album.

“Hypnosis” feat. Brevi:
I’m a sucker for monotonous, droning beats. The music sounds like hypnosis or meditation. This particular song is some of the deepest lyrics I’ve ever written. I’ve been friends with Brevi since my Atlantic days, back in the early 2000’s. Brevi has the most beautiful, spooky, haunting voice I’ve ever heard. I knew she would be perfect on that. The hook pays homage to the first couple lines of MC Serch’s verse on “The Gas Face”. 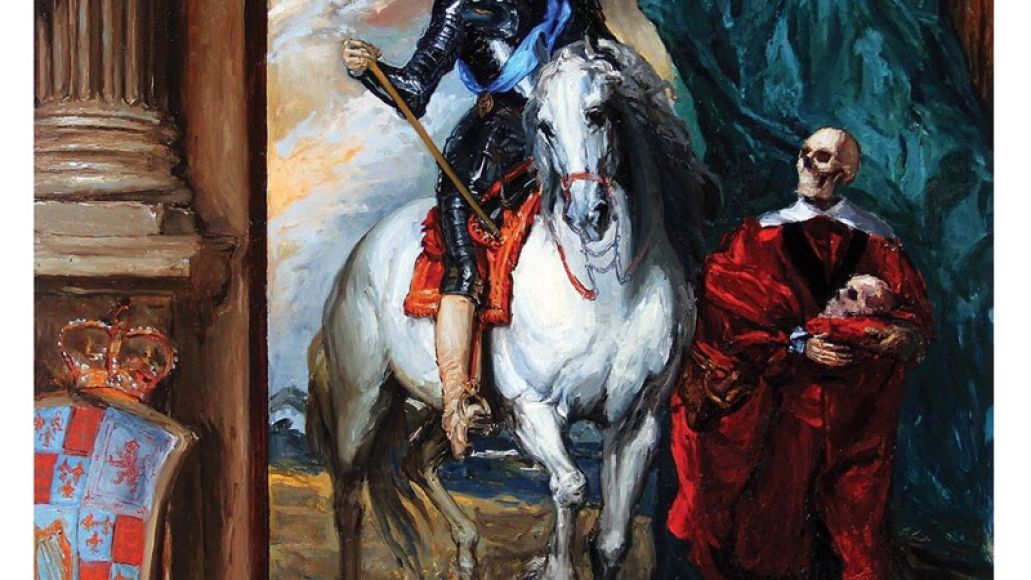 “I Keep On” feat. Pharoahe Monch:
This record is an absolute dream come true. Pete Rock is right up there with Preem as my favorite producer. These guys are Gods to me. I spent hours in the studio with Pete and listened to over 800 beats, LITERALLY. This one just stood out to me. Pharoahe Monch is by far my biggest influence, as an emcee. The first two Organized Konfusion albums pretty much laid the blueprint for what I do. When Monch sent me his verses, I was bugging out. I was high off the excitement of this song coming together.

“A View of Hell (Hell Of A View)” feat. DJ Eloheem:
I worked with Buck[wild] at D.I.T.C. Studios to make this record. The sample was so funky to me. The hook cut is an idea that I’d been holding on to for a long time… waiting for the perfect song to put it on. I just wanted to spaz on this lyrically. Show off shit. My man DJ Eloheem absolutely murdered the cuts on this. He’s one of the best I’ve ever heard.

“Fist of the North Star” feat. Diabolic & DJ Eloheem:
This is another hook I’d been saving for a long time. Myself and my brother Open Mic, were obsessed with the cartoon movie, Fist of the North Star. [It has an] amazing post-apocalyptic story. Me and Diabolic are like two heroes, slugging it out over this track. Stu Bangas produced this. Super sinister feel.

“STOMP RAPPERS” feat. M.O.P., Celph Titled & Chumzilla:
I made this beat for Celph and I, originally. I just wanted something really live, to get crowds rowdy. We got M.O.P. on the track after a suggestion from our business partner. We were like, “Fuck, yeah… nobody would sound better on this than M.O.P.” 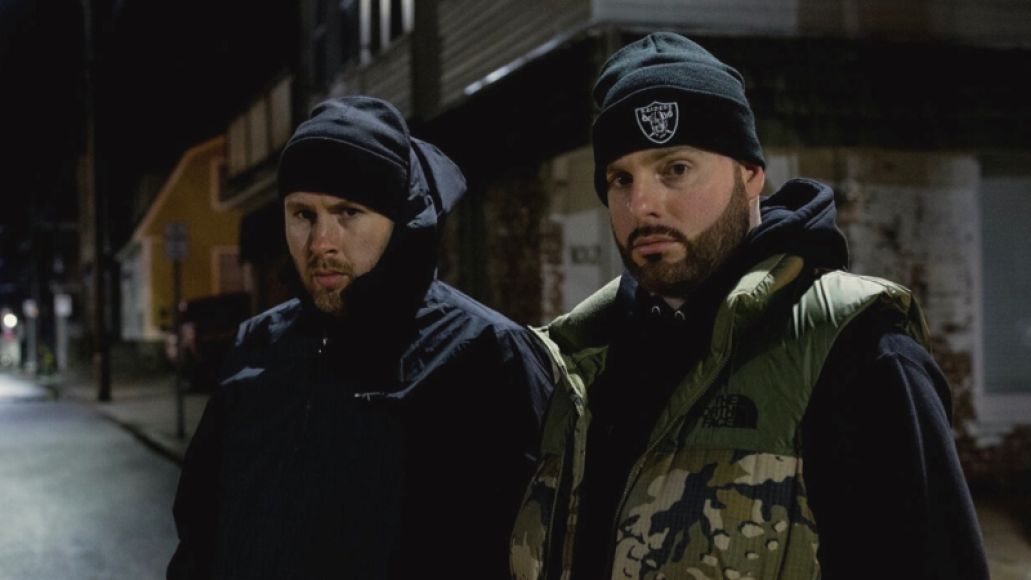 “Legend Of The 3rd Degree” feat. Tone Spliff:
Once again… every time Stu Bangas sends me a beat, you just know something evil or creepy is gonna happen. This one sounded like some ancient ritual, deep-in-the-woods type shit. I wanted to make a song that would speak to my Freemason brothers, but also be intriguing to non-Masons.

“Rise and Shine” feat. Locksmith & DJ Mekalek:
Locksmith is one of the greatest emcees out right now. Period. As soon as I made this beat, I could already hear Lock on it.

“Obi Wan”:
My father passed away from cancer in January of 2012. I was extremely close with him. I couldn’t be at his funeral because I was in critical condition in the hospital with pancreatitis. I had a lot of issues with closure, because I wasn’t there… and he was cremated with no grave site. Writing this song was super cathartic for me. It took me forever to record it, because I’d start crying while I was reading and thinking about the words. After a while I had to zone out… and not pay attention to what I was saying to get the job done. My man Smoke The World played me this beat, and I knew it was the one.

The skits on the album tie the whole thing together and keep a constant theme. The final skit is almost hidden after the last track. The idea is that, everyone is searching for all these profound truths and secrets… like it’s some book with the key to life in it. That doesn’t exist. We get swept up and distracted by so many things, that we forget to actually live life.

Apathy shares a Track by Track breakdown of his new album, The Widow's Son: Stream