Eagles of Death Metal frontman Jesse Hughes drew harsh blow back from fans earlier this week when he criticized the teens behind the March for Our Lives movement. “May everyone of these disgusting vile abusers of the dead live as long as possible so they can have the maximum amount of time to endure their shame,” he said in part, “and be Cursed.” Now, one of his close friends and fellow musician, Mark Lanegan, has also voiced his disappointment over Hughes’ remarks.

In a since deleted tweet (via NME), Lanegan addressed Hughes directly. “When I think of the goods times we’ve had in the past, it fucks my heart to see how far off the rails you’ve gone,” Lanegan wrote. “Come back bro.”

When a conservative fan shot back, “It breaks your heart that your friend has a different opinion? @jesseEODM hasn’t fallen off the rails, you guys have,” Lanegan responded. He pointed out that it was actually Hughes who had reacted aggressively to a differing view point. “I know Jesse to be a guy who would give you the shirt off his back not someone who’d attack someone for their opinions that differ from his,” he replied. 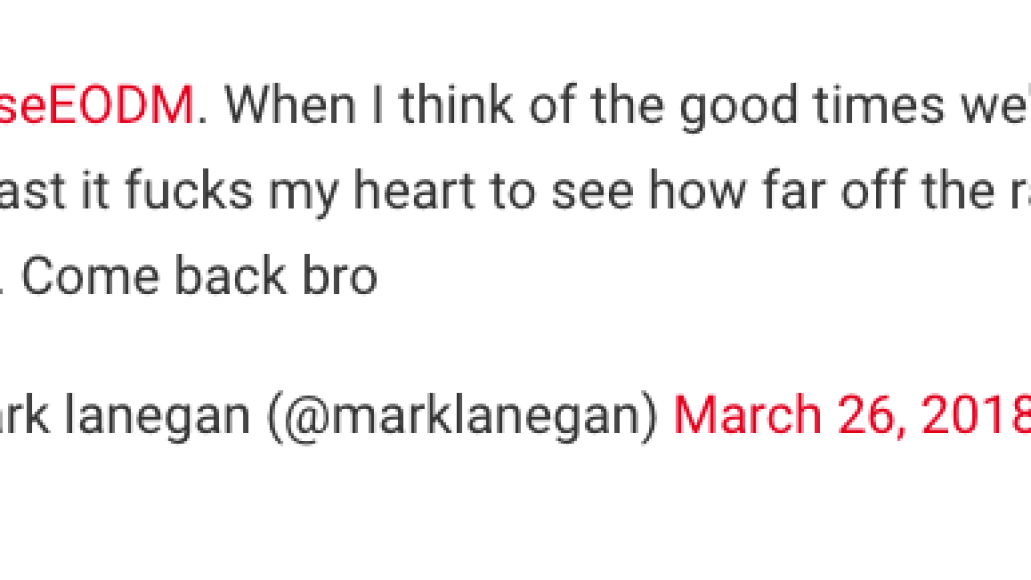 Hughes deleted all of his messages not long after they received condemnation from the public, but screenshots still exist. They include an image of student protester Emma González photoshopped to look like she’s ripping a copy of the US Constitution, and an image of three “pills that are hard to swallow” labeled “Our guns aren’t going anywhere,” “There are only 2 genders,” and “Donald Trump will be your president for 7 more years.”

In one message, Hughes, who was on stage during the 2015 terror attack on Paris’ Bataclan, wrote, “Obviously…The best thing to do to combat chronic abuseres and disregarders of the law(like the law against Murder) is to…….pass anouther Law!…..Genuis!!!…. but before we pass this law we’re going to denigrate the memory and curse ourselves by exploiting the death of 16 of our fellow students for a few Facebook likes and some media attention…..” [sic]

Mark Lanegan to Jesse Hughes: "It fucks my heart to see how far off the rails you've gone"