Rewrites. Nobody wants to do them, but they can be a blessing.

Take this retrospective, for example. The first draft of this Beetlejuice thing was going to start cute, with a play on the “say the name three times” joke, but that’s just piss-poor nostalgia. Another draft, and this writer started talking about his Beetlejuice toys, but that’s a bit sickly sweet, especially for this movie. Another angle: the shock success of Beetlejuice, a crossover macabre smash, but um, duh? The splendid soundtrack? It’s on streaming, so… The yuppie comedy and pondering why Beetlegeuse smokes slims? We’ll just add clips, don’t worry. Also, talk of charting the eternally-gestating Beetlejuice sequel was briefly in play, but like, you can Wikipedia that on your own.

But that’s the thing with rewrites. You can keep working until a.) you’re actually satisfied with the work, or b.) find something odd, or clever, or lasting enough that the whole endeavor starts to make sense and the project becomes worthwhile. And we think we’ve got something worth your time: Beetlejuice’s script.

That’s right. Beetlejuice’s script — more specifically, its fraught genesis — is the film’s most interesting and under-appreciated bit of secret sauce. It’s a wild tale of over-writing, weird pitches, and sheer dumb luck (if we’re being honest). Oh, and David Geffen helped out. Can’t forget the Geffen. It makes you feel lucky that we got the film we have, and all the more convinced that a sequel will never, ever work. What started as straight horror got a bit nuttier, and simply better because of that shift.

The Beetlejuice script is a tome of three writers and a hot-to-trot director gunning for a vision, albeit a vision that was never etched in stone. And that’s the movie’s charm – it says and does whatever it wants. We get the best in wacky crap, esoteric references, and creative risk-taking because, yep, the rewrites helped. Even Tim Burton admitted to not knowing what Beetlejuice was, mere months before its release, though perhaps he put it best himself: “Well, it’s kind of intellectual and kind of stupid … it’s not really a flatout anything.”

Welcome to the afterlife of Beetlejuice’s development and production: a mid-budget studio gas that spawned a string of toys, cartoons, and video games. There was even an attraction at Universal (Beetlejuice’s Rock and Roll Graveyard Revue, which sounds amazing). It was referenced as recently as this week, as a gag in Steven Spielberg’s Ready Player One. And the talk of the sequel, oy, it’s been ages and just can’t rest in peace.

Blending paranormal bureaucracy, left-field alt-comedy, and creepiest of all, yuppie home ownership, Beetlejuice was one of 1988’s biggest, strangest successes (and has a far bigger cultural footprint than Crocodile Dundee II). Sure, you can try to analyze it as a riff on ‘80s selfishness or the banality of death, but why bother when sandworms and snake railings defy the obvious? It’s just such a special egg, funny and memorable and quotable, and it wasn’t supposed to be like this. So where to begin with the ultimate bad boy? The script, of course. 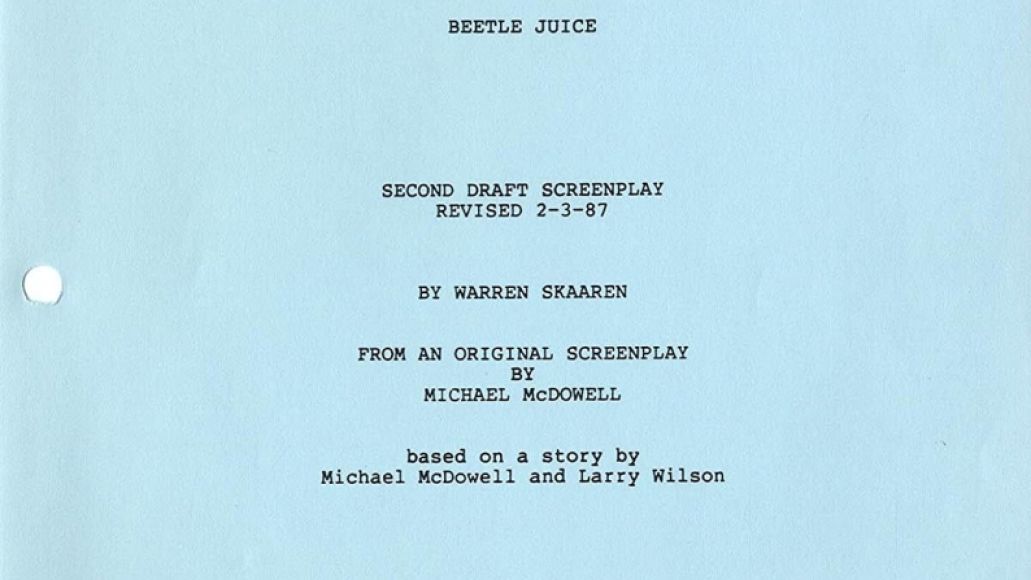 In Hollywood screenwriting, especially at the studio-level, rewrites are just a fact of life. Speaking broadly, the first draft of a screenplay is often seen as the most enticing one. It’s usually been purchased on spec, has the appeal of a high concept, and is seen as something worth building. But once it’s in the hands of a major studio, all bets are off. Far too often – especially in high budget films – audiences can feel that layering, or worse, the contention over voice between writers.

Bigs like Charlie’s Angels or Last Action Hero or Cowboys & Aliens or The Flintstones are great examples of too many cooks; it always starts with a cute idea (or a brand, if a writer’s really unlucky). The foundation is quizzical enough, searching for justification. What are Fred Flintstone’s wants and desires? What’s Barney’s arc? Then the corporate needs and branding get in the way of focusing on something truly unique or compelling. Send Fred to McDonalds. Call it RockDonalds or whatever. Joke’s not playing after a test screening? New writer then! And it spirals down this shaky road to release. Rewrites become death, or limbo … until they don’t, as in the case of Beetlejuice.

Maybe the trivia’s well known for this reading, maybe it isn’t – but how wild to think that Michael McDowell wrote this as a straightforward thriller, with whiffs of The Exorcist, only for it to be re-written into a classic? When trade papers still salivate over ‘production troubles’ and ‘reshoots’ and ‘script doctoring,’ here is one of those movies that benefited greatly from its fraught genesis. 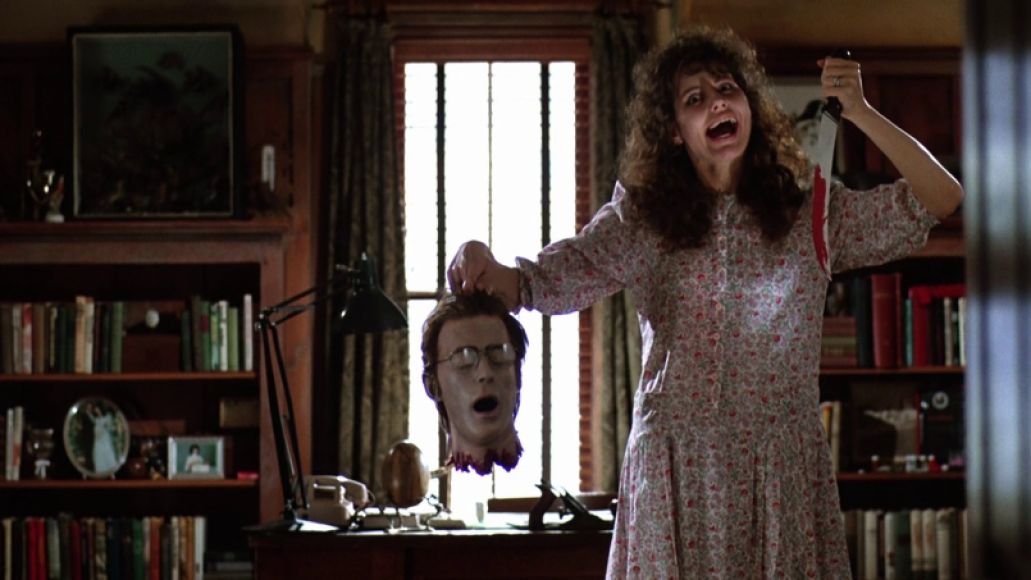 Flashback to writer McDowell’s original draft of the screenplay. Imagine something more generic, at least by ‘80s standards. A well-liked, but hard-to-sell concept, McDowell’s first draft languished like so much Black List material. His script had the bones, though – a family home being invaded by a nefarious presence in creatively cruel, shape-shifting ways. But it was hardly comical. Betelgeuse was a winged demon that would manifest primarily as a Middle Eastern man. The striped suits and quips came later.

What’s more, he was murderous, not a scary prankster. Betelguese’s m.o. was to kill the Deetz family (Winona Ryder, Catherine O’Hara, Jeffrey Jones), and not just spook ‘em. Additionally, the Maitlands (Geena Davis and Alec Baldwin) were to die a horrible drowning death, far more graphic than what’s featured in the film. Just this week, producer Larry Wilson revealed to Yahoo that Lydia Deetz was going to die in a fire, and live with the Maitlands in the afterlife.

Other little details? Betelgeuse wanted to rape Lydia. He was summoned through his bones being exhumed, not via his name being uttered three times. There was another Deetz daughter, aged nine and named Cathy. The rules were less set in stone. The tone, far darker and more brutal for sure. It sounds decent enough, and perhaps like it would have been a good B-movie project for Craven or Cosmatos at the time. But there would have been no Harry Belafonte.

The script floated around, but not without hurdles. In a 2014 Den of Geek interview, Wilson (who also worked on the script) shared that he tried to pitch McDowell’s first draft to genre guru Walter Hill at Universal. Hill called Wilson in to chew him out over a “piece of shit” screenplay. (Wilson’s words.) Eventually, the script landed in David Geffen’s hands; he was fond of it, and not long after that, Burton agreed to work on the project. But Burton wanted flair, to break from tropes and soften the script’s teeth, and let’s not forget that, after the surprising success of Pee-Wee’s Big Adventure, Burton was a total get for Warner Bros. Tons of scripts came to the director, like the one that eventually became Bobcat Goldthwait’s Hot to Trot, so think about our luck and Burton’s instincts in this situation.

Rewrites were requested to approach Burton’s looser vision. He wanted imagination. Something oddball. Wilson worked with McDowell to adjust the tone and lighten things up, in addition to adding more humor. But McDowell and Wilson’s drafts were eventually put on hold, as Burton hired famous script doctor Warren Skaaren to shift things dramatically.

Skaaren gave the Beetle its juice, so to say. The Texas-bred writer was a sort of Hollywood jack-of-all-trades; therapist, starchaser, new age spiritualist. For starters, he re-did Top Gun’s problematic script. What was initially a more traditional plane actioner was lightened up and given heart by Skaaren. He also came up with stuff like the Righteous Brothers scene in rewrites, and got Tom Cruise back on board with romance and more emotional development. Maverick got fleshed out. Later on, Skaaren put Nietzche-inspired dialogue into Burton’s ’89 Batman, evolving the Joker’s words to surreal filigree, and did about 10 rounds of scripts for Days of Thunder before other famed doctor Robert Towne took the wheel on the project. Sadly, Skaaren passed away in 1990.

Burton met Skaaren in Austin around ’86, ’87, and the two spent a weekend discussing the afterlife. But Burton wanted something – and pardon the word – quirkier. Skaaren introduced music, recommending Percy Sledge, and the inevitably famous use of Belafonte. The afterlife became a phantom zone bureaucracy (note: suicides become civil servants in Beetlejuice). And most successfully, Skaaren toned down Betelguese himself. Skaaren was inspired by Native American trickster archetypes for his draft and his take on the Guese. The demon with wings became a shockingly affable pervert with zany speeches about Julliard and Elvis.

Sure, the menace is still there, but the deaths are limited to the opening, and they’re not gruesome. There was initially more backstory as well in early drafts, but it was slashed in favor of oddity. Then again, isn’t it more fun to look at Betelguese in awe or disgust, rather than know he’s been dead for hundreds of years and that he’s just bored and bitter? While filmmaking is a community, it’s not out-of-line to credit Skaaren as Beetlejuice’s best and boldest architect. A Betelguese whisperer, or conjurer.

Writing isn’t an exact science, but it sure can benefit from the right ideas in the right hands at the right time. Shane Black’s first draft of Last Boy Scout was a reprieve for a break-up until producer Joel Silver wanted blood and guts to make it more of a Bruce Willis vehicle. With Alien 3, or Prometheus, the less said about the many scripts and the production indecision in the face of topping the first films, the better. But once in a blue moon you get a Dr. Strangelove, which was based on dour source material and somehow became a brilliant black comedy through revisions from Terry Southern.

That last bit of info is true of Beetlejuice. Look at the dinner scene, with the shrimp hands. Amazing, right? Well, the first draft saw carpets coming to life and trying to strangle the Deetzes. Skaaren’s draft introduced music, and a creepy sense of play that became the film’s hallmark.

Remarkably, Skaaren did write a draft on a sequel. It’s titled Beetlejuice in Love and can be read at UT-Austin. In the years since, there have been all kinds of rumors, from Beetlejuice Goes Hawaiian to more recent talk of Warner ramping up production by hiring writers to crack an angle, but ah, there’s the irony. Beetlejuice, the original, was just that – distinct voices, fresh ideas, and the spirit of writing silly until something sticks. Now, Beetlejuice is product, Lego Dimensons DLC, and no rewrite can capture the spirited silliness of that original. Granted, yes, rewrites are just the nature of the beast, that’s the whole thesis here, but Beetlejuice was just too groovy and lucky to do over again.

Besides, Skaaren’s long gone, and Burton is arguably a shell of what he wanted to be in his late 20s. It would be a miracle of epic proportions if a team of writers could shake, shake, shake Beetlejuice back to life like it’s 1988. And we’re somewhat glad no one has really been given a green-light.

Now, how to end this sucker? Well, sometimes a song is a good way to close things out? After all, it worked for Skaaren.