Because American politics continues to fall deeper into the twilight zone, this past week saw Kanye West break his Twitter silence to defend Donald Trump. The two met at Trump Tower in 2016, just a few weeks after the Presidential Election That Doomed Us All, but it appears their friendship has now entered the political sphere. What’s more, Trump is wasting no time in capitalizing on it: He’s now trying to bait donors using Kanye’s support.

“You don’t have to agree with trump but the mob can’t make me not love him,” Kanye wrote of Trump on Twitter. “We are both dragon energy. He is my brother. I love everyone. I don’t agree with everything anyone does. That’s what makes us individuals. And we have the right to independent thought.” The Yeezus rapper then proceeded to flaunt his Trump-signed MAGA.

You don't have to agree with trump but the mob can't make me not love him. We are both dragon energy. He is my brother. I love everyone. I don't agree with everything anyone does. That's what makes us individuals. And we have the right to independent thought.

The Trump-supporting tweets unsurprisingly nearly broke the internet and resulted in a number of longtime allies and collaborators — such as Janelle Monae, J. Cole, and Jaden Smith — choosing to bail on the Kanye train. Trump’s camp, however, had the opposite the reaction.

Trump thanked Kanye on Twitter, and then while on a Fox & Friends interview this morning, he again thanked the MC again for having “good taste.” But Trump is more than just grateful for Kanye’s words, he’s now using them to raise funds for his own political use, specifically his re-election campaign. As Slate points out, The Trump Make American Great Again Committee sent out this text to its donors list: 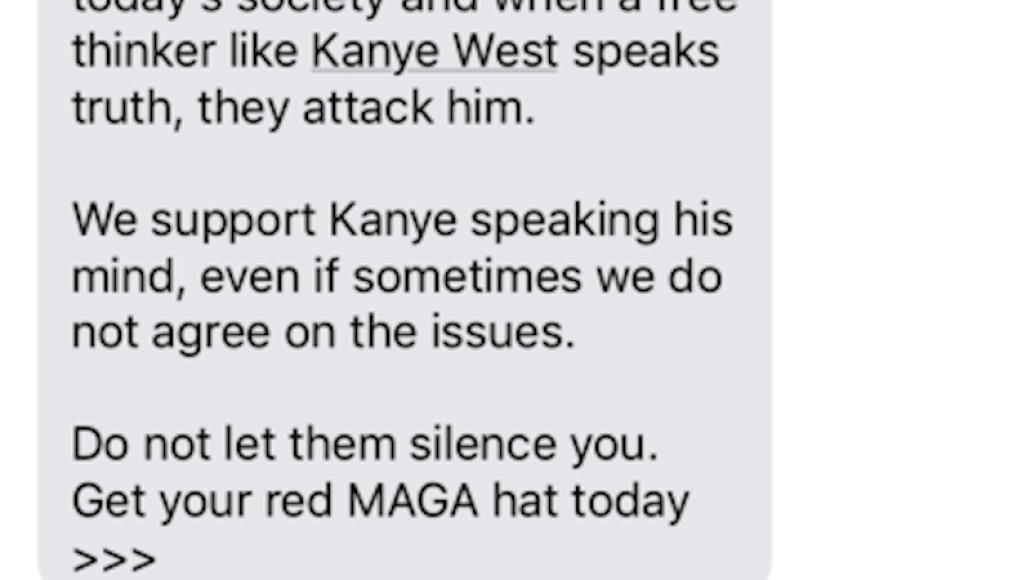 “The American people do not want to be told what to think or who to support,” the text reads, its language echoing Kanye’s own tweets. “Group think is a mandate in today’s society and when a free thinker like Kanye West speaks truth, they attack him. We support Kanye speaking his mind, even if sometimes we do not agree on the issues.” Included at the end of the text is a link to purchase a MAGA hat just like Kanye’s.

While some might want to chalk up Kanye’s latest Twitter spree as “just another harmless Ye stunt,” it has the potential to be so much more than that — at this very moment, Trump could be raking in money and bolstering his re-election efforts all thanks to Kanye.

In addition to assisting in the dismantling of America, Kanye is writing a philosophy book in real time. He’s also weeks away from dropping five new albums: a solo LP and a collaborative record with Kid Cudi in addition to releases from Nas, Pusha T, and Tenaya Taylor, all of which he produced himself.

Donald Trump is fundraising off of Kanye's support