Track by Track is a recurring new music feature in which artists delve deep into the story behind each song on their latest album.

Today, Hinds are back with their sophomore full-length, I Don’t Run, the follow-up to the Spanish indie outfit’s 2016 breakthrough, Leave Me Alone. The 11-track effort is available to stream below via Spotify and Apple Music.

Recorded alongside Gordon Raphael (The Strokes, Regina Spektor), the songs maintain the band’s billowy, carefree vibes while also leaving room for some tears and reflection.“We’re not satisfied with [writing only happy, carefree songs],” guitarist and vocalist Ana Perrote said. “On this album, the struggles are clear. We want to be brave.” Pre-release singles “The Club”, “New For You”, and “Finally Floating” are fun as hell, but each infused with resonant lyrics clearly inspired by the complicated relationships swirling around the myriad members.

“The first record was written and recorded in such a rush while we were touring,” Perrote recently told The Fader. “That was an early face of ourselves as musicians. This one is finally exactly what we wanted. If we had a self-titled record, this would be it.”

Listen to it below.

For further insight into how the album came together, the Hinds’ vocalist/guitarist Carlotta Cosials (with a little help from bassist Ade Martin) has broken down I Don’t Run Track by Track. Check out what she had to say below.

“The Club”:
This song comes out from the darkest side of the nights of Madrid. It came out in a moment of feeling you belong to nowhere and you’re trying to hold yourself to ANYTHING. We wanted it to be powerful, filthy and furious. Lead guitar brings you a little bit of melancholy in the choruses though. We love this song as the first track ’cause when we wrote it and first listened to it we couldn’t believe that we hadn’t written it before and that we hadn’t been listening to it for years. A friend said that it is more Hinds than Hinds themselves hahah. So from now on, we feel it as it’s our presentation card.

“Soberland”:
Sometimes life makes you cross paths with such funny characters, but what’s worst is sometimes you feel like you fall in love with them. “Soberland” is born when you finally see the reality as it is, not in an angry way but just like… funny. I like the way we’ve been more honest than ever in this album, and this track two is just the beginning. For a second we thought about putting on its first name and surname, but now we prefer saying that it’s a song about NYC. No offense.

“Linda”:
This is the saddest. The hardest. The compilation of tears. One of the most famous questions without answer: Why does love end? Why does somebody stop choosing you? Why can you be sharing a bed but knowing there’s no more love around? I really don’t know why that happens, but it does. This song was especially difficult to sing for me during the album recording. On one hand because of the power of the emotions of the lyrics we wrote, and on the other hand because it was a challenge to me to sing it softly and not full of anger/sandness. Plus my voice is not very sweet so it was frustrating. I even cried hahah we all were very tired while recording this. Gordon was really helpful with this issue I am happy with how it came out in the end.

“New For You”:
This song was written after we recorded all the rest. We just came back from tour and, this is weird in Hinds but it came out so so fast. All the parts, all the instruments, melodies, lyrics… It just felt kind of easy. And when Ana and me wrote the lyrics we realized that is a timeless feeling: To want to be somebody new and pure, to try to be a better version of yourself for love. I think choosing love as the reason to improve yourself is awesome, cause love is the best thing we have.

“Echoing My Name”:
This song has a Doctor Jekyll & Mr. Hyde vibe haha. Verses and chorus are as opposite as they could be to empower that difference between “the truth” and THE TRUTH. What I see and what I feel. Human beings are curious animals. Sometimes you lie to yourself and try to auto-convince yourself about something that in the bottom of your heart you know is not true. There are things that you don’t wanna admit to make your life less complicated and it’s okay, we all do that. That’s why we made a song hahah.

“Tester”:
All right, I’d love to highlight that we repeat six times in this song the next: “SHOULD I’VE KNOWN BEFORE YOU WERE ALSO BANGING HER?” I’m so glad that we are girls and we wrote this, for real. But then when it comes to music this song is the craziest, funniest and most different one. Sometimes when we listen to it it still makes me laugh when the “Black Sabbath” part arrives. I love Hinds, I really love how we do the songs como nos salen del coño.

“Finally Floating”:
We wrote this song at the studio and, to be honest, it was a nightmare. We were trying to build it every instrument at the same time and it got a bit stressful and I think you can tell a little bit in the recording. You can tell how focused everybody is in staying together, it’s a song that needs the most group collaboration or it would fall apart. And meaning-wise, Ana and me always have been a bit obsessed with dreams. Dreams, the night, all the moments that surround bedtime we feel are the most interesting ones of your daily life. It’s when you’re more free, it’s when you’re not faking anything. And in this world we are living, looking for the most authentic moments is a challenge. I had sticker in my head, a sentence a friend told me years ago, he told me, “I’m doing better, but I just don’t sleep. I don’t wanna fall asleep because I know what the dream is going to be about.” We wanted to give this vibe to the song, a middle point in between dreams and reality.

“I Feel Cold But I Feel More”:
When we dare into writing this second album, Ana and me just started a new phase in our lives. We used to call it “la vida lápiz” because we felt like kids with a new toy and we wanted just to carry on even though we were a mess. We were okay with that mess. We were okay with committing mistakes. Nothing really seemed to care enough to make us feel unhappy. We went together on a trip to Cadiz and we wrote this song while the sky was the most purple I’ve ever seen in my life and the sea was completely silver. If this song were a picture it really was that image: Us absolutely alone in a huge beach, with a bottle of two liters of Coca-Cola already without gas and two guitars.

“To The Morning Light”:
This song used to be called “Furious” before it had a real name, but we were wrong it should have been called “Frustration”. You can have the best intentions about someone and try to be the most helpful possible, but sometimes it’s impossible. I guess it’s easier to be sad than happy, definitely not more enjoyable but to be happy you have to make an effort. We understand that, and we really love making people happy. It’s just a task that we love, being people “to the morning light,” even if it’s double effort for us it doesn’t seem like that to us. That’s why it gets so frustrating when it just doesn’t work, we feel like we fail… not only that we fail but that the other person is still not happy! So it’s a double failure. We needed to include this feeling in the album. 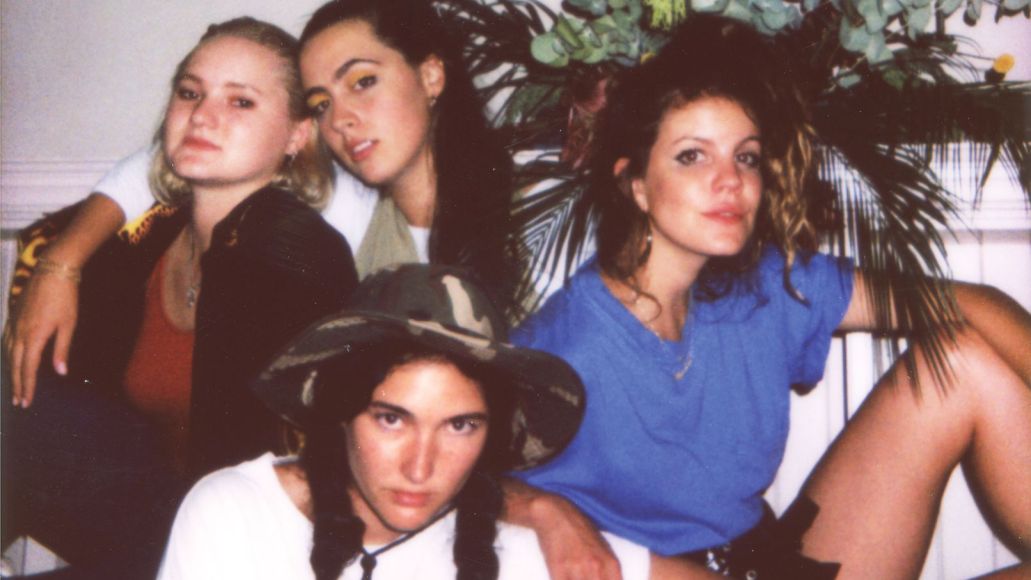 “Rookie”:
Ade Martin: “Rookie was a funny song to write and even more to record. At the beginning we used to call it “Romantica”, which means “the romantic one” cause it started as a slow song but then we realized that if we played it faster it turned into a really good party song. We decided to leave it like that so now its cool cause we have a “romantic song” to party. Its a nice mixture I think. The problem was that when we got to the studio, we recorded it really fast, to a point where once it was recorded we realized it was too much so we tried to slow it down digitally. Obviously a bad idea. We had to record it again haha.

“Ma Nuit”:
Having Hinds made a before and after in our lives (this was obvious haha). But I mean about listening to songs. Suddenly we realized all the songs from the ’60s and ’70s that talk about being on the road — cause it was a reiterative issue in those decades — they actually talk about BEING on the road. The road it’s not a metaphor of life, it’s not an artistic way of talking. I bet they were talking about the fucking roads, about being on tour. And we have a liiiiiiiitleeeeee experience about that hahaha. It’s hard to be on tour all the time, it’s hard to belong to nowhere. It’s hard to miss people nonstop. It’s hard to build your own life when it is in the hands of a rock n roll band. So the little riff of this song I started playing when we were in Perth in Australia, the most isolated city of the world. I kept playing it during soundchecks for months of touring. Then one day in Madrid, after an exhausting evening of writing I started playing it again and Ana immediately played the chords and started to sing, like mixing Spanish and English. It felt so natural and genuine we started a voice note to remember it, and suddenly she started to sing in French too (as she is half French half Spanish). That voice note is gold, that’s why we wanted to keep it that way in the album. As simple as possible, as authentic as possible, ONLY ONE TAKE. The perfect way to end I Don’t Run.

Hinds Give a Track By Track Breakdown of Their Wild New Album, I Don't Run: Stream