Track by Track is a new music feature in which we invite our favorite new artists to break down each song on their latest album.

Years of sweaty DIY shows, career shifts, and jam sessions will come to fruition for Chicago neo-psycho rockers Post Animal this week. Tomorrow, the band will embark on a massive headlining tour of North America in support of their debut album, When I Think Of You In A Castle. It’s not due out until Friday, but Consequence of Sound is premiering it in full below.

When I Think Of You In A Castle began to coalesce during a 2016 retreat in a haunted Michigan lake house where the band began recording in the midst of what drummer Wesley describes as “an uncertain time for us as a band.” In a press statement, he adds, “Before this album, we weren’t sure what the future of the band was going to look like. I was considering moving to Los Angeles and [guitarist] Joe [Keery] was off filming Stranger Things. We didn’t know where we were all going but we knew we wanted to make an album with all of us in the same room.”

Those sessions, which the band describe as “magical,” served to solidify Post Animal’s future as a unit. The band toured extensively in 2017 while bassist Dalton Allison perfected the album’s mix and Jared Hirshland, brother of guitarist/keyboardist Jake, handled mastering. What you hear on the final effort is the sound of a band of brothers, including drummer Wesley Toledo and guitarists Matt Williams and Javi Reyes, connecting over a shared passion for psychedelic, poppy rock. Lead vocals are shared by all — even Keery, who despite not joining the band on the road sings on the peppy “Ralphie” and the sludgier “Gelatin Mode” — a testament to the fact that this is the work of a truly collaborative group of musicians.

Check out the album below:

When I Think Of You In A Castle is due out on this Friday, April 20th via Polyvinyl. Pre-order it here. For more on what went into the creation of the record, the band has broken down the album Track by Track.

“Everything All At Once”:
This song didn’t start as an instrumental intro; our early demos had vocal harmonies moving throughout. We recorded it first of the bunch, and set up a few mics on an acoustic guitar and a Casiotone portable keyboard. It started to rain outside, so we opened the window and tracked two takes straight through. In post production, our friend Adam mixed some pads and synth bass in. The instrumental version reminded us of our time at the lake, so we left the vocals off.

“Gelatin Mode”:
The first song we finished for the album. We took segments from the original demo and organized the intro, verses, and choruses. It needed a climax, so we workshopped riffs until we found one dramatic enough. Before we decided on the lyrics, “Javelin Throw” was the main phrase, then “Gelatin Mold”, and finally “Gelatin Mode”. Don’t be shocked if you hear something else live.

“Tire Eyes”:
This one’s been in the oven for at least three years. The first version was much less frantic with a melodic, meandering guitar riff playing through the verses, which are now very rhythmic. It probably wouldn’t have made the cut for the record, but just before we left to track, we rehabbed it in a jam and fell back in love. We had our friends Mr. Cadien and Mr. Malcom join us for some harmonious joy at the end; Malcom’s responsible for that angelic yell in the finale.

“Ralphie”:
This was the first song we recorded with a live guitar ensemble. Javi had just arrived to start guitars and Dalton was dehydrated and noise-fatigued after recording drum — lying on the porch in woe. We set up the mics in a circle in the living room and decided to start with something difficult. After about 20 tries we had the take of the Ralphie intro that made the record, and with this take we established the way we’d police ourselves for the next tracks to get live takes we’d be proud of.

“Heart Made of Metal”:
Life, in this song, is a person named Lorelei. It’s lyrically about convincing oneself to not fear the change around them, and eventually succumbing to the answerless way we’re all tossed through existence. 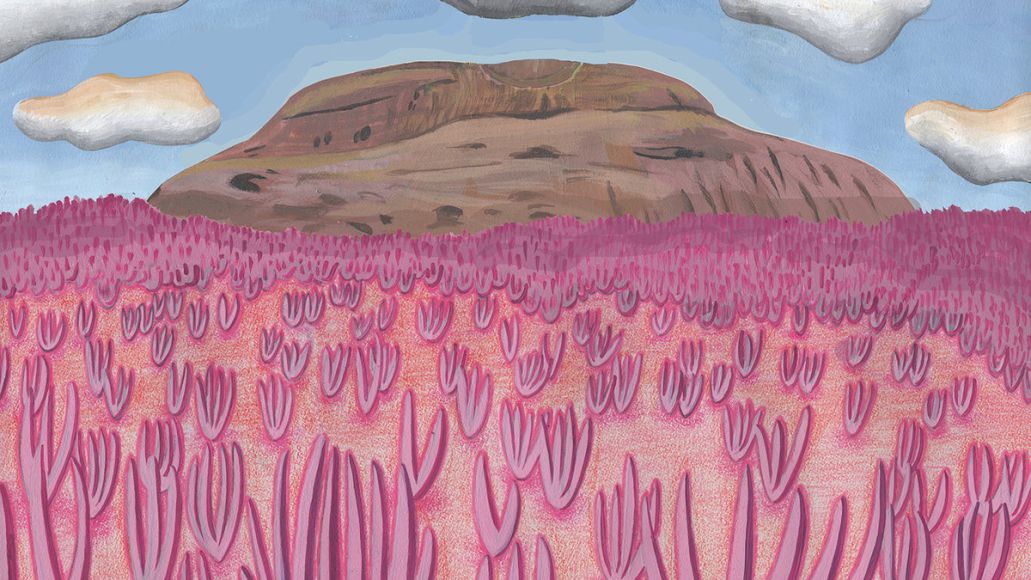 “The Castle”:
When I Think Of You In A Castle was originally the title of this song. The short vocal verse is about love, and longing, and using imagination to create a feeling of togetherness. It’s placed at the beginning of Side B as a mostly instrumental breath; some peace before the deep dive that follows.

“Special Moment”:
This song is a response to the pop tunes in the album’s first half, using a quirky half-step progression to create something both off-kilter and digestible. We didn’t have enough headphone inputs or good amps to accommodate all four guitars recording at once, so Jake recorded “Special Moment” headphone-less and through a 10-inch Fender starter amp.

“Victory Lap:Danger Zone”:
Our rowdiest track. It’s about playing through a conflict in your head and building it up until you hit rage, aka the “danger zone.” The meditative end acts like a partial resolution to that inner conflict. Falling in line, but not completely satisfied. For when you’re stuck in a metal box.

“One Thing”:
This song is the slow cooking burner on the record. In the same suit as the end of Victory Lap, it’s about coping with something that you can never get away from. The song arrived at the lake house as only bass and synth. All of the guitar harmonies were written just before recording.

“Dirtpicker”:
Dirtpicker was the last song we tracked drums for. Immediately after finishing we had to take a break because a cup of coffee spilled all over Dalton’s computer. We had no back up of the two days of work and played a disparaged game of catch in the front yard as the computer dried out. Three hours later, we fired it up and it worked. Everything could’ve ended right there. The computer is fine.

“Susie (Bonus)”:
When you’re done with the record, crack a cold one and take Susie for a spin.

Post Animal break down their debut album, When I Think Of You In A Castle, Track by Track: Stream