Our recurring new music feature Track by Track finds an artists digging into the gritty details of each track on their latest effort.

“If you’ve ever chased a dream and bet the farm on it, you know the moments of deep doubt that come with true commitment,” Sam Himself says in a press release. Transplanted the relative quiet of his native Switzerland to the hustle and bustle of New York, the indie rocker knows what it’s like to experience that crippling uncertainty. Everyone must find their own way through that darkness, and for Sam Himself, his escape became his sophomore EP, Nobody.

Due out on April 20th, Nobody is six tracks that punch through insecurity with anthemic vigor. Sam Himself uses a vocal power somewhere between The National’s Matt Berninger and San Fermin’s Allen Tate to sing songs of finding your place, especially in the vastness of his adopted hometown (“About a Place”, “New York Decisions”). Musically, he delves into classic, synth-y indie sounds while adding a touch of Americana spirit. The result often splits the difference between Twin Shadow and Darkness on the Edge of Town, as on the simmering “Nobody” or the throbbing “Heartphones”.

Each composition finds Sam Himself wrestling with some form of hesitancy, as if he’s questioning whether he’s able to write the very song to which you’re listening. Yet every time, he fights through those dubious notions to arrive at a tenderly represented bit of dark honesty. Ahead of the official release, you can listen to it all unfold below.

For more insight into the emotional and creative effort that went into Nobody, Sam Himself has broken down each song Track by Track.

“199X”:
We were a few days into a longer session at Strange Weather Studio in Brooklyn. We had already cut one or two of the other tracks on the EP, and the rest of the musicians had left for the day. It was just me and producer Daniel Schlett, listening to my demo of “199X” together. The version I played him was sort of a gothy rockabilly track, very Suicide, with a programmed beat, lots of slap delay and all kinds of staccato. I also sang in this hysterical falsetto for some reason. It wasn’t all that easy on the ears. I knew there was a decent song in there, though, and eventually, in one of his frequent moments of genius, Daniel said something like, “Just play it for me, forget the weird beat and all that, just take a guitar, play the chords, and sing it in your own voice.” It felt like one of those VH1 Behind the Music moments. We got it right in about five minutes and the next day we recorded it with the band.

With “199X” I tried to write a song about my generation, by which I mean kids born sometime during the early ’90s. We seem to suffer from a particular kind of entitlement, and the music community is no exception. It’s a monstrous sense of desert that keeps us up at night, but we mistake it for ambition or goal-orientedness or some other SoulCycle virtue. Without humility or perspective, we become fanatical about what we think the world owes us, usually wealth or fame or both. If I had to sum up the song in a single moment, it would be overhearing someone say, “If I don’t get such and such, I’m literally gonna kill myself.” People actually say that — like, literally. Now, I’m certainly not trying to lecture anyone. I just think there’s an important difference between taking your craft seriously and taking yourself seriously. Unfortunately, that difference is lost on a lot of people my age.

“Nobody”:
Fun fact: I started writing “Nobody” as a country ballad in open G tuning. Then I realized it had to be upbeat, something you could dance to, because the song is ultimately a celebration. When I moved to New York from Switzerland, I knew I was in for a bit of shell shock, but I had no idea just how big of a pond I was plunging into. Where I’m from, if you’re in a band and you’re not a complete mess, chances are someone will hear you eventually. Here, no one cared. And I mean nobody. I felt like the proverbial tree falling in the forest. There I was, within arm’s length of this great community of musicians, unable to get a foot in the door, not even a toe. That wasn’t easy at first. But instead of giving up, I gradually began to embrace the freedom my outsider status afforded me. If no one knows your name, you can pretty much do whatever the hell you want. I think that’s empowering. I think that calls for a little celebratory dance.

“Bad as a Mile”:
This is the first song on the EP that features backing vocals by Denitia Odigie, my dear friend and an amazing musician I’ve been working with for a long time. The drum machine in the intro is a remnant of the song’s demo. I usually program beats before I hand them over to Parker Kindred’s magic touch behind the kit.

“Bad as a Mile” started with the words, which is rare for me. The name and theme of the song are inspired by a short poem by Philip Larkin, one of my favorite poets (this is the part where I subtly convey that I’m hella bookish). The poem, I think, is about regret. That’s what the song is about too: having, losing, reliving over and over again. I’d love to be more specific, but regret is such an elusive, shape-shifting colossus to me, I probably wouldn’t do a good job at it. Think of it this way: When someone says, “no regrets, bro,” and does that surfer thing with their thumb and pinkie? The opposite of that.

“About a Place”:
I might as well just keep it highbrow at this point. The first line of this song, “The view from nowhere sees it all,” I owe to the philosopher Thomas Nagel. He wrote a book called The View from Nowhere. You’re probably better off googling it, because I’m on very thin ice here, but in the book he describes the human ability to occupy a vantage point that goes beyond personal experience and is in some sense detached from the world. To me, that idea had a strong emotional resonance. It reminded me of a familiar place of bottoming out and feeling beyond miserable, just catatonically down, where the world around you and the people in it have nothing to do with you anymore. You see it all with nauseating clarity from a distance you can’t imagine ever crossing again. You’re done.

So that was a pretty heavy bag I dragged into the studio, but when Denitia, Teeny Lieberson and her sister Lizzie (of TEEN) sang their harmonies over it, something came full circle. Something gave. I had to, like, walk around the block afterwards. That’s why I do what I do. 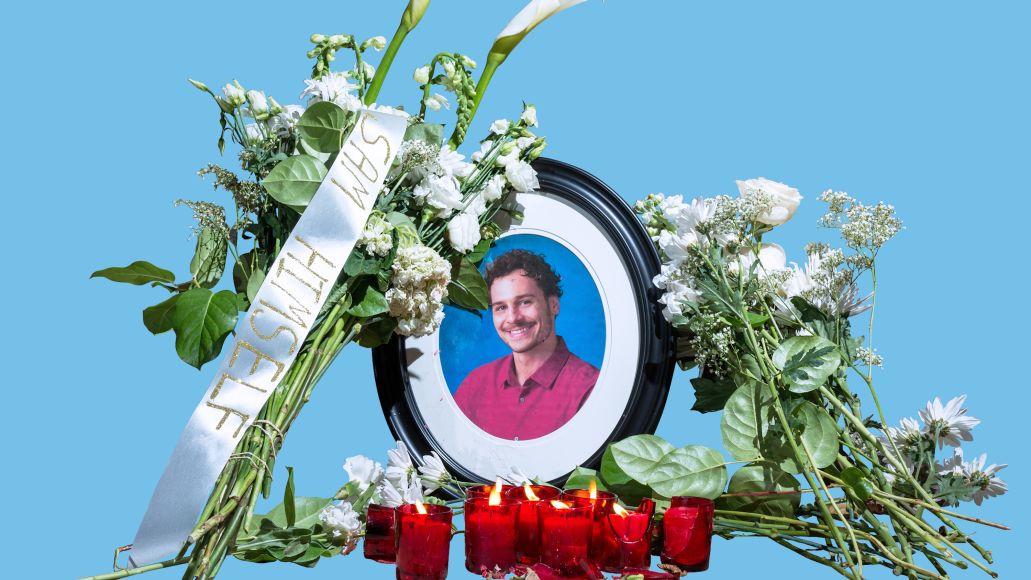 “Heartphones”:
One of the things I love about “Heartphones” is that it highlights the spectacular rhythm section of the EP, namely drummer Parker Kindred and bass player Josh Werner, two of the finest musicians I’ve ever known. They’ve been holding it down with me ever since my first record in New York, god knows why. The song’s bridge is always one of my favorite parts of the set when we play live. Just listen to it at a high volume. That’s hard. That’s a concrete bridge.

At some point during the writing process (whatever the hell that is) of this EP, I had a minor epiphany of sorts. The songs I write are pop songs, structurally speaking. They have verses, choruses, even bridges, all that good stuff. And pop songs are love songs. That’s not to say that there aren’t pop songs about all kinds of other things, but in its essential form, the pop song is a love song. (I stand by that, now let the comment section trolling begin!) So I tried to use that form to write about something other than romance. Instead, I wanted to capture a moment of self-doubt, in which you interrogate yourself about how much you really want the things you want and how much you’re willing to sacrifice for them; how brave you are, deep down, in the face of real resistance. “Heartphones” is a love song about doing what you love. But don’t get me wrong, if you’re in a bad way romantically and driving around late at night, by all means, put that shit on!

“New York Decisions”:
“New York Decisions” is the first tune I ever wrote on piano, except I couldn’t play the piano at the time. I’m still not much of a pianist, but back then I was physically unable to play more than a handful of basic chords. I don’t think there’s more than one black key in the entire song. Hence the demo I made was a fairly boring ’70s ballad, complete with lounge lizard drums and sappy guitars. It sounded like something straight out of the back catalogue of a certain Madison Square Garden regular with two first names. Cue producer extraordinaire Daniel Schlett, who just kept stripping away from the song and slimming it down like a mad dietician until only my voice and the piano were left. We finally took a break from it and Daniel messed with it at home. Before we picked it back up together, he played me this Alice Coltrane record and somehow managed to draw a connection to the little ballad we were working on. I trusted him, I always do, and we took it from there. I’ve made plenty of questionable New York decisions in my time, but this one wasn’t so bad.

Sam Himself gives a Track by Track breakdown of his new EP, Nobody: Stream