Summer looms, a time that used to mean warm breezes, ice cream trucks, and nothing to watch on TV. That last isn’t the case anymore, of course: while May, June, and July will see a slightly lighter load for your DVR, television never sleeps these days. But while the crowd may be thinning in the coming weeks, April was essentially a hellscape — if your hell is so much good television that you don’t know where to start. 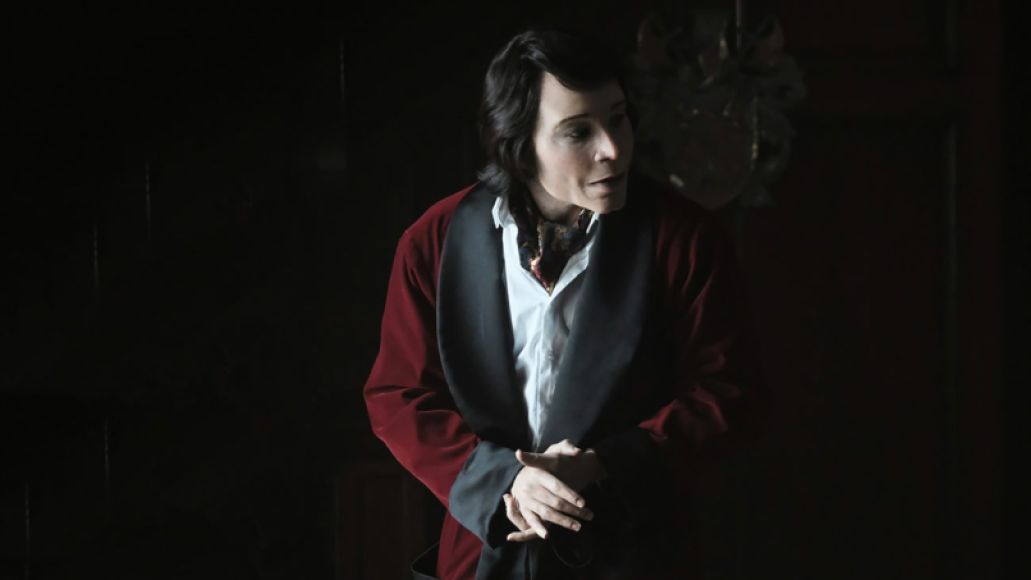 Atlanta’s extraordinary second season isn’t lacking highlights, but even in that rich, crowded field, “Teddy Perkins” stands out. Centered on Darius’ (Lakeith Stanfield) trip to pick up a free piano from the eccentric Theodore Perkins (Donald Glover, under white prosthetics). What ensues is a melancholy, tightly coiled nightmare, which FX wisely chose to air without commercials. When you’re under a spell this dark, this finely wrought, only a fool would try to break it.

We’ll be writing, talking, and thinking about “Teddy Perkins” for years to come — its plentiful cultural references; its philosophical underpinnings; its stunning cinematography; a pair of gripping performances; a few legit solid jump-scares; the list goes on. But for a moment, let’s stop and appreciate the brilliance of the Sammy Sosa hat joke. In a tense 40-odd minutes, there’s one clear moment of laughter, an incredible release deployed at the perfect moment, but one that’s tied directly to the story being told. Even when Atlanta gives you a belly-laugh, it stays on message.

(Listen: From Atlanta to The Handmaid’s Tale: TV Party’s Best TV of April 2018) 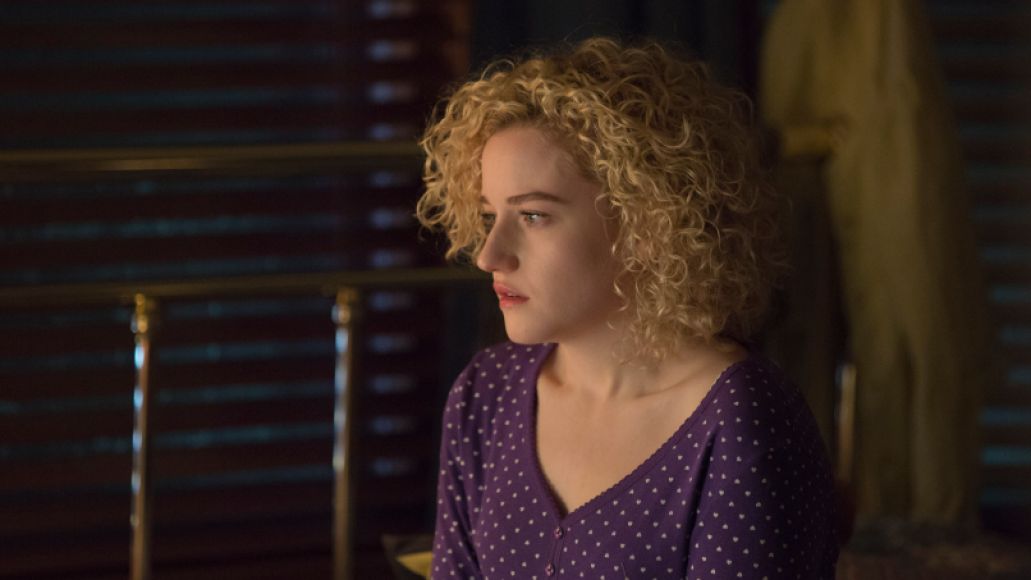 The Americans, “The Great Patriotic War” — One of the most upsetting hours in the show’s history, complete with headlocks, a bloodbath in a kitchen, and a great display of drunk-acting from national treasure Margo Martindale.

Westworld, “Reunion” — The best use yet of Westworld’s tricky, time-jumping mechanics sees Dolores and Arnold take a trip to the mainland, while in the almost-present, a delicious cameo gives us a glimpse of the current El Lazo.

The Handmaid’s Tale, “Unwomen” — Hulu’s powerhouse series leaves Gilead behind for a trip to the Colonies, anchored by a subtle, gripping performance by Alexis Bledel.

DC’s Legends of Tomorrow, “The Good, The Bad, And The Cuddly” — A deliriously goofy finale wraps up the third season of one of TV’s most underrated shows, complete with a giant, god-like Beebo.

How in holy hell did we not cover two of the month’s most dazzlingly written, beautifully performed shows? The answer, of course, is that juggernauts like Legion, Westworld, and The Handmaid’s Tale returned, while The Americans and Atlanta continued excellent seasons. Jane the Virgin blew our minds, Legends of Tomorrow blew up Beebo, and as a result, we kind of blew it. 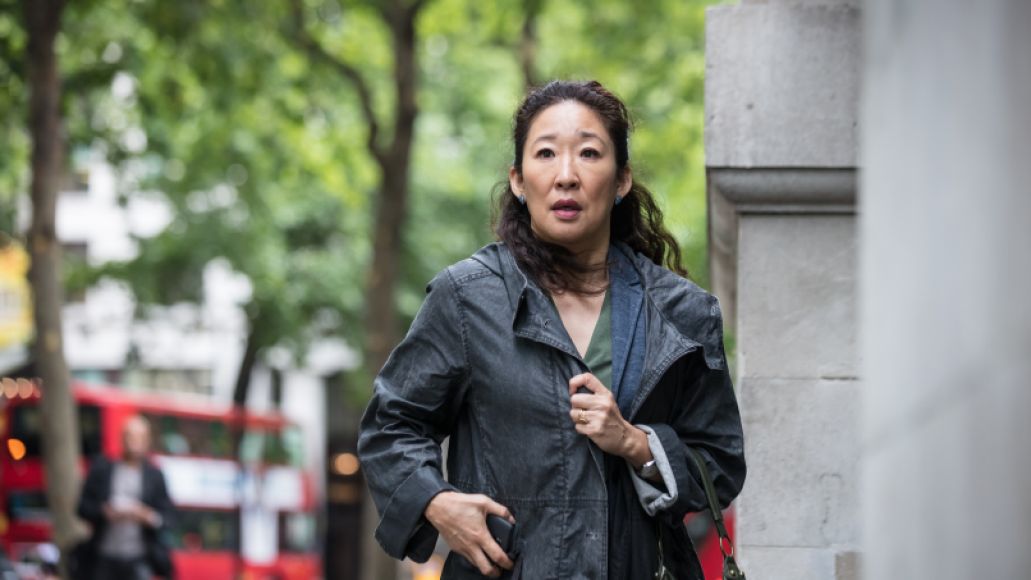 Killing Eve was always going to be worth a look. Penned by Fleabag creator and star Phoebe Waller-Bridge, adapted from the Villanelle novels by Luke Jennings, and starring five-time Emmy nominee Sandra Oh, the BBC America series has serious bona fides. Yet Killing Eve has less than zero interest in playing at “prestige.” It would rather be its own weird, sexy, sad, scary, excellent self.

Eve Polastri (Oh) is an MI-5 employee with a habit—she’s hooked on tracking an unknown killer, one she’s damn sure is a woman. As it turns out, she’s right. Villanelle (Jodie Comer) is an elite assassin. She’s sadistic, amused, and a real genius in the murder department, and she’s caught the attention of Carolyn Martens (Fiona Shaw), an MI-6 agent who shares Eve’s hunch. Profession, coincidence, and sheer instinct begin to draw Eve and her quarry together, allowing Waller-Bridge to exercise her knack for black humor rooted in loss, Oh to peel back layer upon layer in a compelling performance, and Comer to command attention with her every scene.

To say too much about Killing Eve is to spoil some of its many pleasures. Just watch it. It’s already been renewed for a second season, but if it doesn’t get a third, I’ll stab myself in the leg with a letter opener just to see what happens. 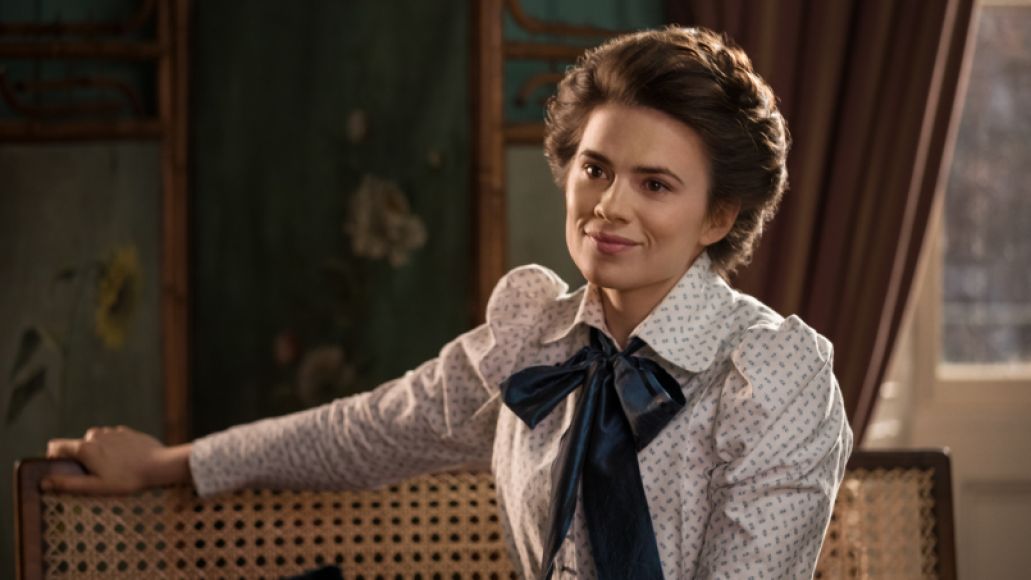 If Killing Eve demands you go into it unspoiled, Howards End requires no such practice. E.M. Forster’s novel was first published in 1910 and was most notably committed to film in a 1992 Merchant Ivory production that earned three Academy Awards, including one for Emma Thompson. Here Kenneth Lonergan, the playwright and filmmaker behind Manchester by the Sea and You Can Count on Me, does the adaptation honors, while Thompson’s shoes are ably filled by the once and former Agent Carter, Hayley Atwell. Theirs are the starriest names attached, but together Starz and the BBC cut no corners, rounding up a top-flight cast that includes Tracey Ullman, Matthew Macfadyen, Philippa Coulthard, Alex Lawther, and Julia Ormond, and put them all in the hands of Hettie Macdonald, whose thoughtful, lush direction allows both the cast and the script to shine.

Shine, they do. Like Killing Eve, Howards End embraces the complexity of its characters, and of Atwell’s Margaret Schlegel in particular; also like Waller-Bridge’s series, it’s not content to do merely what you expect, and is much more interested in embracing the messiness of one’s inner life. The result is a gentle, thoughtful, and deeply moving miniseries that explores the nature of the class system while also taking an intimate look at kindness, empathy, and longing; it’s filled with beautiful costumes and grand homes but prefers to linger on an lingering glance, a sad smile, the cost of a simple lie. It’s rich and simple, intellectual and emotional, and lovely, all the way through.

Performances of the Month — Brian Tyree Henry and Elisabeth Moss 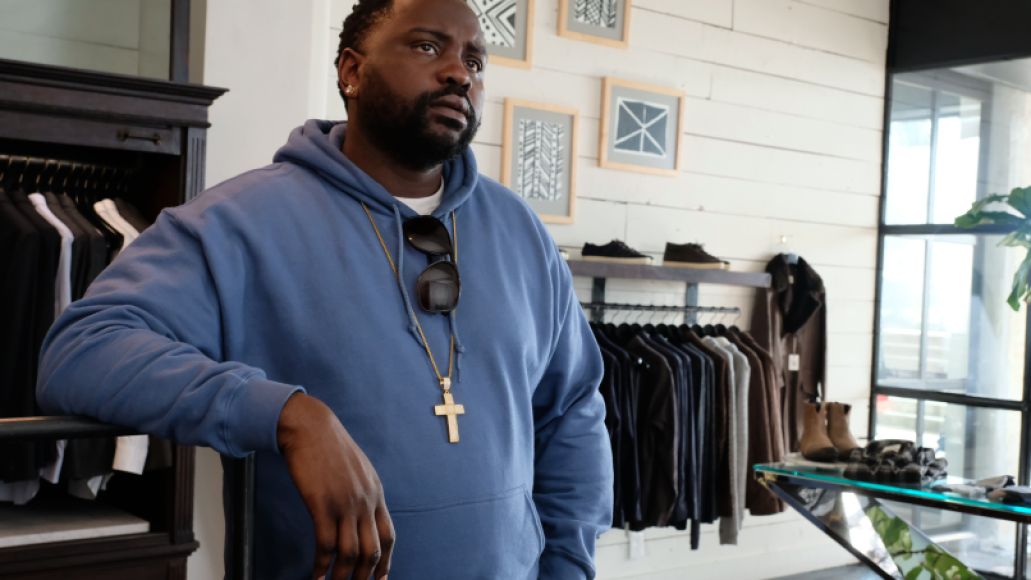 One of the more curious surprises about Atlanta: Robbin’ Season has been the way in which the show has recentered itself as an ensemble piece. Arguably the greatest beneficiary of this approach has been Brian Tyree Henry, whose handful of showcase episodes have highlighted the actor’s boundless gifts for side-eye and genuine gravitas. That he finds these notes in the generally quiet, taciturn Paper Boi is all the more impressive; particularly in “Wood” he conveys multitudes about the come-up rapper’s inner turmoil with gestures as simple as a sustained gaze or a barely noticeable shift in posture. Henry’s doing some of the best work of anybody on television right now, and we’re hoping that Robbin’ Season will get him the awards season love he deserves. -Dominick Suzanne-Mayer 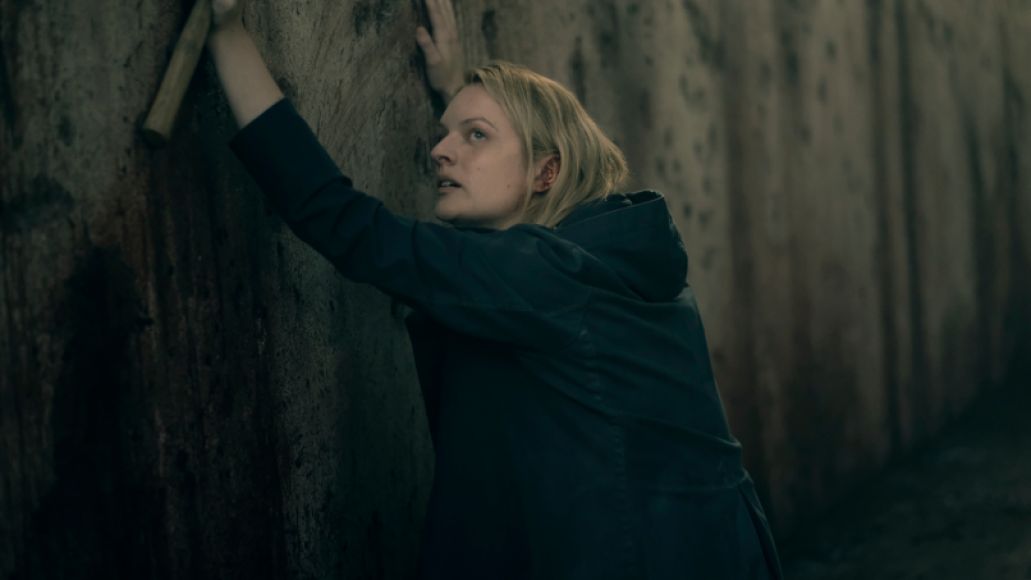 It’s no surprise that Elisabeth Moss is extraordinary in The Handmaid’s Tale. Her turn in the gripping first season of the Hulu series was towering, a haunting marriage of caustic voice-over and a subtle, ever-shifting face. All those things remain true in the second season of the series, and though we’re hearing less of June’s voice, we’re seeing even more of her story through expression alone. In the premiere, her eyes pull us through a terrifying ride and march to the gallows; in the second episode, she silently tours the abandoned Boston Globe, letting us know without words what horrors she encounters. It’s the performances, and Moss’ in particular, that keep The Handmaid’s Tale from straying into indulgent territory. It’s never just brutality for brutality’s sake when the story is so rooted in terrified, trembling, defiant humanity.

Elsewhere in Consequence of TV This Month

Why a Woman Needed to Take Down Donald Trump 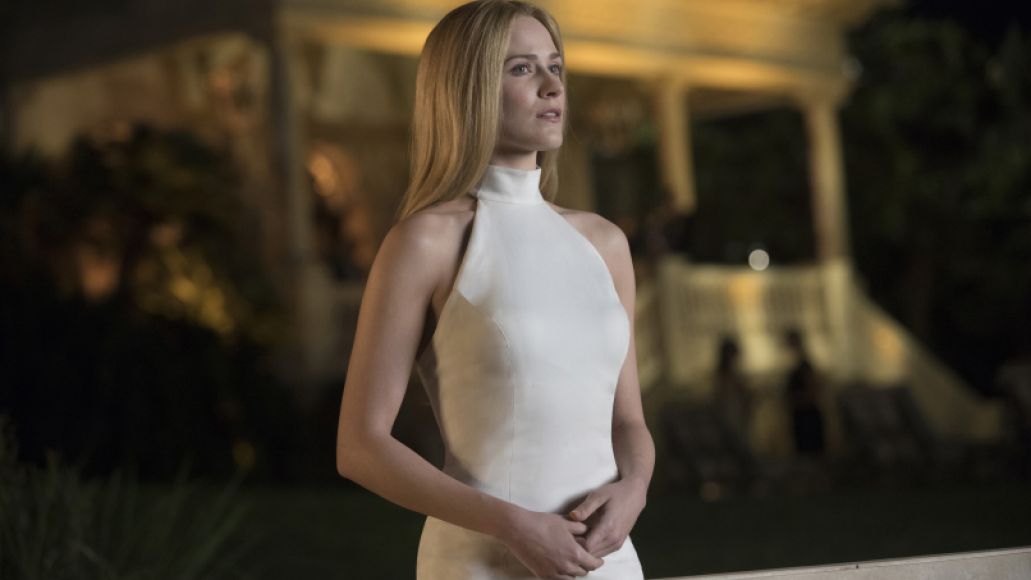 The Office’s Creed Bratton Explains How Music Saved Him

With Legion Season 2, the Words Are a Maze, Your Eyes Are the Map

Dance, Magic, Dance: How Legion Makes the Most of Its Mutant Movements