A lot has happened in the past week. If you’re not familiar with the current events pitting Drake and Pusha-T against one another, you’re probably not much of a rap fan. Those who have followed along do so with imaginary popcorn buckets in hand, eagerly dissecting and anticipating each round of diss tracks in the year’s biggest hip-hop beef. The ensuing circus, as Drake himself describes it, involves or at least touches a who’s-who’s of 21st century rap music, everyone from Birdman and Lil Wayne to Kanye West and Rick Ross.

Though the excitement surrounding this conflict feels fresh, in practice it’s another case of history repeating itself. While the New York City gang rivalries and hasty truces that sparked hip-hop obviously qualify, not to mention the lyrical scuffles that preceded it, the Bridge Wars arguably serve as the patient zero of beef, virally manifested in a scathing back-and-forth between some of the finest emcees of their day. As a kid growing up in Queens in the 1980s, I took KRS-One’s verses on “South Bronx” and “The Bridge Is Over” personally. The nerve, the audacity of the Boogie Down Productions’ mouthpiece to go after my boro’s representatives Marley Marl and MC Shan with such grandstanding vitriol! Hearing Shan’s own “Kill That Noise” response all these years later still fills me with a certain amount local pride as he vigorously defends the Juice Crew’s cred. 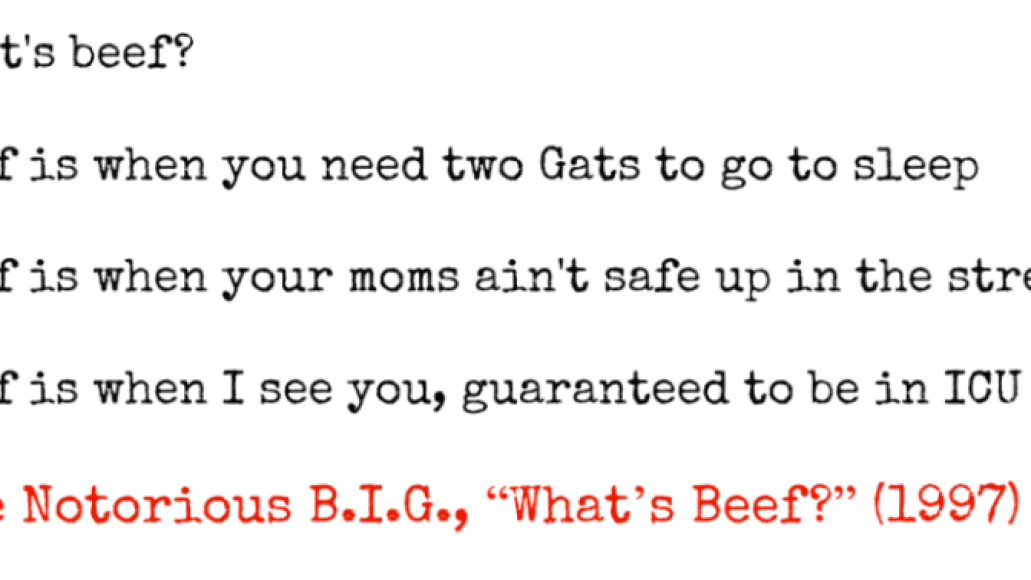 To modern, more youthful ears, this virtual turf war may feel a bit quaint, especially with the now outmoded rapping styles of its participants. Yet, the basic elements of intimacy that define hip-hop’s epic battles — Biggie and Pac, Jay-Z and Nas, Murder Inc. and G-Unit/Shady/Aftermath, Gucci and Jeezy, Nicki and Remy, and so on — are all here. Like so many beefs since, the Bridge Wars were sparked by a misunderstanding: Shan’s account of the rise of the Queensbridge contingent on his single “The Bridge” was taken by KRS as an attempt to falsely claim the genre originated somewhere other than The Bronx. By the time that point got cleared up on “Kill That Noise”, the damage was already done, with all parties too heated to let things go.

That classically contentious DNA remains intact listening not only to “Infrafred”, “Duppy Freestyle”, and “The Story of Adidon”, as well the less hyped antecedents in Drake and Pusha’s long standing feud like “Two Birds, One Stone” and “Exodus 23:1”. Tracks like these latest ones differ from the usual subs and veiled barbs levied at unnamed figures in rap songs. There’s an intimacy in all the devilish details, the insider knowledge and streets-is-watching intel used unapologetically in bars against their rivals, with the threat of violence ever present even if metaphorical. Collateral damage abounds, with industry figures, personal friends, and family members regularly caught in the verbal crossfire. A true rap beef emerges from escalation, and before long, no topic is taboo in the service of crushing the guy or gal on the other end.

In the aftermath of “Adonin”, those unfamiliar with hip-hop history, blinded by fandom, or otherwise caught in their feelings after those three minutes of savagery appeared quick to call foul on Pusha. Some decried his swipes at Drake’s parents while others felt unsettled by the smirking digs at OVO Sound producer Noah “40” Shebib’s multiple sclerosis. In an age of apology, where celebrities, politicians, and even laypersons find themselves fumbling for forgiveness in a ceaseless storm of gaffes, slurs, and misdeeds, Pusha appears to have gone too far — or has he?

Attempts to police the content of a diss track are at best naive and at worst driven by ulterior motives. Rap lyrics regularly flaunt illegality and immorality, which remains part of its enduring allure with outsiders and relatability with insiders. With such norms firmly intact, the very idea of setting ground rules or applying community standards to rap beef is laughable. Call it American exceptionalism set to a beat. 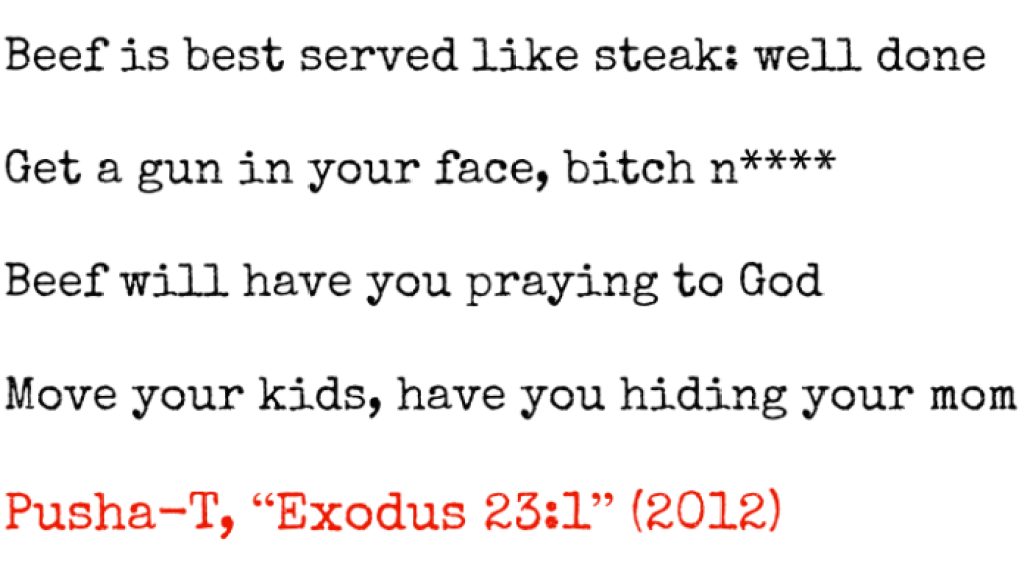 Acknowledging the relative lawlessness of rap beef doesn’t equate to acceptance of the problematic contents by default. Rappers embroiled in what Drake and Pusha find themselves in intend to offend, devastate, and dominate. Listeners are meant to gasp, point, and howl at a well-executed and particularly brutal diss track for that very reason. Several of the most celebrated songs in the oeuvre weaponize homophobia and sexism, including Ice Cube’s “No Vaseline”, Ja Rule’s “Loose Change”, and Jay Z’s “Supa Ugly”. Indeed, in the wake of “Adonin”, with Pusha’s inherent denigration of Drake’s alleged baby mother’s adult entertainment career, some have poignantly pointed out that women too often take the brunt of the assault — and they’re right.

Nonetheless, rap beef runs counter to morality, and at its darkest and ugliest it contributes to far more harm than hurt feelings. Drake and Pusha have been building up to this for years, and even with the latter’s talk on hearses on “Adonin”, there’s not much reason to anticipate things will veer in this fatal direction. Instead, this is a feast for rap lovers of all ages. Even if it ends peaceably, as in the case of Jay Z and Nas or MC Shan and KRS-One, it will go down in hip-hop history, warts and all.

In a Rap Beef, There’s No Such Thing as Crossing the Line