Our new music feature Track by Track allows an artist the chance to delve into the stories of each song on their newest release.

Veteran DJ/producer Guillermo S. Herren, aka Prefuse 73, has a new album out tomorrow (May 25th) through Lex Records. Dubbed Sacrifices, it’s his first under the moniker in about three years following 2015’s Rivington Não Rio. It also comes after Lady Parts, his 2016 collaborative album with rapper Michael Christmas.

Sacrifices finds Herren steering away from the hip-hop-oriented sound of his past releases and leaning into textures more concerned with ambiance and a minimalist touch. Throughout the 17-track effort, the devil is in the details, as they say, with many of the poignant scenes and dramatic shifts found not front and center, but rather in the quiet spaces between these movements.

We can hear Herren’s meticulous ear at work on “Silver & Gold”, a single whose ebb and flow mimics the coolness and tension of love. There’s also the mystical “The World is Bigger”, which features warping, jazz-esque production that recalls the vivid atmospherics of newer artists like Kaytranada.

Ahead of the official release, Consequence of Sound is premiering Sacrifices in full below. Take a listen.

In a detailed breakdown, Herren offers CoS a behind-the-scenes look at each and every one of Sacrifices’ 17 songs. Read on.

“New Salad Intro”:
I made this from a blend of old NYC and ATL hip-hop radio shows in order to set this record off. It’s somewhat of a tradition with all of my Prefuse 73 records, starting with my first song on, Vocal Studies & Uprock Narratives.

“Late To The Party”:
The song title pretty much sums me up totally. This overall sound is similar to how it sounds when I’m waking up in the morning, I feel like I can conquer the world but once the initial energy wears off, I’m lucky to make it to anyone’s party.

“Her Desire Is To Be Left Alone”:
At this point, it may sound cliche but I made this song while the whole #MeToo movement was brewing. My manager lives under a slumlord who cut her water off and I mixed it while she was taking a shower in the next room. It was so aggressive in it’s tone that she heard it and called it “The Shower Song” until I came up with a real title later.

“Transmission Nines”:
Another passage from random bits of the radi… Just a breather. 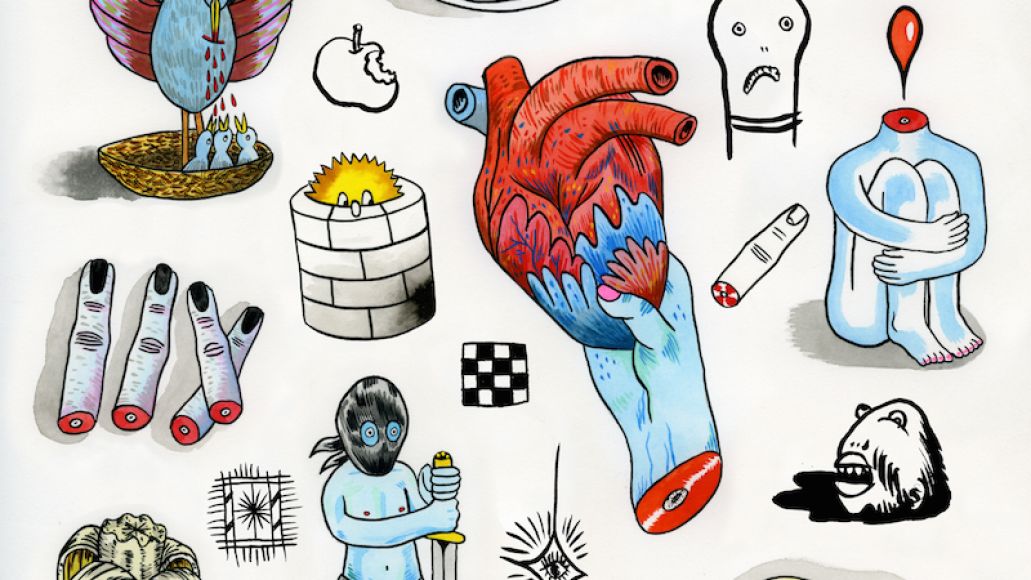 “Without Anyone”:
I lived in upstate NY while making most of this record without uttering a word for days on end. I thought the title was fitting.

“The New Year”:
I made this while the new reality of 2017 eclipsed 2016. To me, it was a horrible feeling in the world politically — but personally, this IS my favorite track from the entire album. Hands down

“Washington Heights Lovers”:
It’s corny, but I wrote this when I first started dating my “now” girlfriend. She has lived most of her life in Washington Heights until I finally convinced her to move in with me a month ago.

“Basinskitarian”:
A few years ago, my friend Jeremy DeVine that owns Temporary Residence Ltd. gifted me with a huge vinyl box set from William Basinski. It was probably the best gift anyone has ever given me and I still listen to it once a week. There is nothing more beautiful than tape rotting off of a reel to reel… Although this track has absolutely nothing to do with William Basinski, it’s more of a “thank you” to his music and the gift that Jeremy gave me.

“Silver & Gold (featuring James Tillman)”:
I love this song and I love James Tillman’s beautiful voice. I thought it would be amazing to work with him and this song is a testament to what we could have done in the future… but we haven’t done anything else.

“The World Is Bigger”:
This is a LONG fucking song… At one point, along with many of the other songs on this album, I thought it might stand on it’s own better without vocals (which it initially had)… so I left it alone as a ‘prog rap’ beat.

“In The Blood”:
Again, like song 11. I had vocals on the track that I loved but time wasn’t in my favor. I took too way too long and missed the deadline. This only means I’ll write a different version too.

“Transmission of Eights”:
Yet another collision of radio sounds so everyone can take a deep breath.

“Azares”:
I wrote this song for my friend Carla Azarfrom the band Autolux. She’s an amazing drummer and human. I was talking to her a lot while working on this album. A very positive woman.

“Dripping With Excuses”:
I titled this song long after it was made. I think the title speaks for itself, I’d prefer to leave it at that.

“False Charges”:
I may have written this song first out of all of these. It’s about deniability… Specifically law enforcement deniability.

“We Lost Our Beat Tapes in Mecca”:
Another favorite… It sounds like I buried music in the sand of the holiest place on Earth but I’ll never obtain it again. A suitable farewell.