Our new music feature Track by Track gives an artists the platform to dig into the background of each song on their newest album.

The sounds coming from Chicago’s hip-hop scene are as varied from each other as they are from rap at large. Soul, gospel, conscious rap, drill, and other styles have all taken prominence in the Windy City over recent years, cementing it at the forefront of beats and bars. Out of all that innovation now rises another young voice named Sen Morimoto, who’s bringing yet another unique take on the genre.

Born in Kyoto, Japan and growing up in Western Massachusetts, Morimoto has been studying jazz saxophone since his earliest days. When he brought his talents to Chicago, he began producing for the likes of Joseph Chilliams, KAINA, and Nnamdi Ogbonnaya. Now, he’s blending his multi-instrumental jazz background with his hip-hop production skills for his debut album, Cannonball!.

Out May 18th via Sooper Records, Cannonball! is completely produced, engineered, mixed, and performed by Morimoto himself, the distinctive work of an artist bringing his idiosyncratic vision to life. The nine-track effort introduces listeners to his soft style of rapping as he lays down complex, shifting rhythms. While tracks like “This Is Not” and the Reason Being-featuring “Picture of a Painting” come closest to feeling like something we’re familiar with from Chi-Town beat makers, things like the title track and “How It Feels” give the impression heavy and obscure jazz samples — but it’s all Morimoto. He can get opium hazy (“I Just Spoke to Mama” featuring KAINA), psychedelic (“Die Dumb”), and contemplative (“People Watching”), and all of it intrigues like the next big Chicago sound should.

Ahead of the album’s release, you can stream the entire thing below. Pre-order Cannonball! via Sooper Records.

For more on how Sen Morimoto is bringing his own touch to hip-hop, the Chi-Town artist has broken down Cannonball! track by track. Check out what he has to say below.

“Sections”:
I got out of work and went down the street to a recording studio called AudioTree, where Brok works. I hadn’t prepared anything to record, so we started layering saxophones. When we had a few layers recorded, I came back into the control room where I met a guy who works in the studio across the hall. I heard he wrote the McDonald’s theme. He said the saxophones reminded him of Humphrey Bogart. We kept working on it like that. Brok helped me record improvised layers of drums, bass, and piano. I took the instrumental home, chopped it up and wrote some lyrics about the feeling you get when you finally understand a cosmic joke. “Irony tells a joke with patience.”

“This Is Not”:
I tried to write a song that’s tough but only by describing how life works. This is literally as threatening as I can sound, which is not very. It’s another one about how everything is connected. I’m like — look out for karma! And some of it’s just about how everything is scary and fucked up if you think too hard. The second half is maybe my favorite vocal part on the album because I get to rap in Japanese. I haven’t done that much since I was a teenager. My Japanese has gotten pretty bad so using music to practice is exciting to me. I clumsily say in Japanese, “The difference between my house and my home — me, myself and I”

My brother Yuya has been making short films for years and he always included me in them when we were together, so I was psyched I got to make a video with him for this one. We shot it in Haleakala crater on Mauii while visiting my sister. My parents are in the videos too which is my favorite part.

This was the last song I wrote for the album. I had been feeling really lost and having trouble sleeping. I started doing this thing where I would get off work, go home, lay in bed, then go to my practice space around midnight, play saxophone as loud and as fast as I could for an hour or two, then write a song, sleep on the floor for a couple hours, wake up, drop my things off at home, and go to work again. This one, “How It Feels”, and “How It Is” were all made like that. I share my practice space with some great bands. It has no windows. This one is about forgiveness I think.

“How It Feels”:
The chord changes on this song are my favorite on the record. Isaac said the “It wasn’t real I feel that but…” part sounds like “Golden Slumbers”-type dramatic silly Paul McCartney. I liked that. The chorus feels like 6/8 but it moves in counts of 10, which was not intentional when I wrote it. I usually don’t realize the quirks in the production until I’m teaching it to the band to perform live. Then I’m like oh wow this makes no sense. I like to produce and write in different time signatures but I try to make sure it still feels natural.

“Die Dumb”:
I hit a rut making the album so I went out on the porch to smoke. I was sitting outside listening to this Penny & The Quarters song called “I Cried a Tear” and looking at the moon. I thought since I wasn’t getting anywhere on the record I should just stay up all night and make an acapella EP of songs that sound like “I Cried a Tear”. It ended up taking me hours to write and record the first two lines, so I just chopped that part up and made the beat for “Die Dumb”. It’s about when you’re like, “I’m gonna die and I’m not going to know any more than I do now. Oh no!” 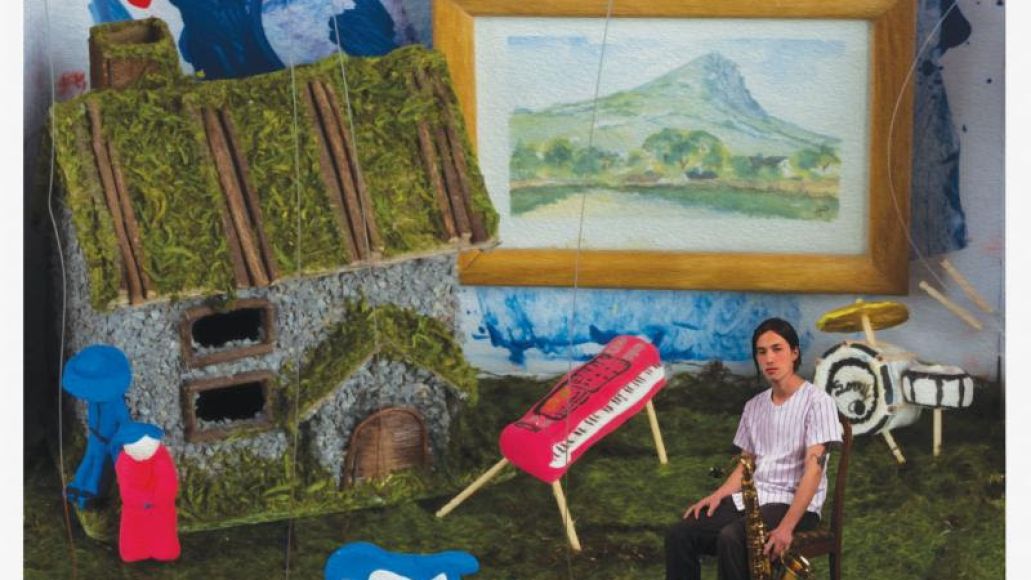 “Picture of a Painting” (feat. Reason Being):
This is the oldest song on the record. I made it the summer after I released the last full length I did, For Me & Ladie. Isaac moved in to the loft and we made some music in my room, which was just two walls made of cardboard and wood scraps. I wasn’t sure if I should hit those BeeGees high notes on “Dance!” but Isaac said I definitely had to. He always knows best. At that time I planned on making a record where I produced everything and sang the hooks but every verse was a feature or a saxophone solo. So I sent this one to Reason Being. He sent it back to me right away with this amazing verse. He can really rap. I’ve been playing this one live for a couple years and I usually solo over the verse or have Sam do a trumpet solo. It’s the only song in my set that we really get to stretch out on.

“I Just Spoke to Mama” (feat. Kaina):
Kaina and I write songs together all the time. We usually go see something inspiring during the day, like a temple or a garden, then go home and make a song that feels like that day. I like producing with her because I get to just play all the instruments and she helps me distinguish the good ideas from the bad ones. I wrote the lyrics later and sent the song to her. We’re both chronic over-thinkers so she caught the mood perfectly and wrote a great verse. This is my favorite song on the album.

“How It Is”:
This one is about how life is gross and it’s sad to lose innocence or realize things can’t all just be warm and positive because you want them to be but, “What did you think this was/ Ice ice ice / Tell me how it is to you.” The verse is about combatting a jaded perspective that comes for you. Walk the dog, talk to God, smoke pot if it helps. I find it usually doesn’t now. Meditation and prayer have been helpful, though I don’t practice enough. I made a video for this with Low Moon Productions. Jake and Bayley are geniuses. It is about looking for something real.

“People Watching”:
I made this beat for Mal Devisa originally but she didn’t end up using it. So I wrote a song to it in my room. A couple years ago I played a SoFar sounds show in the basement of a cafe. I usually try to play new songs live a bunch before I release them so I can understand how it really feels to deliver lyrics to people face to face. I was feeling really paranoid that night but for some reason the sound engineer Brok seemed like someone I could trust. We became friends and he ended up mastering the record, and recording track one with me. I love Brok. I’m making a music video right now for this song while I write this. Weird!