Vampire Weekend have provided fans with an exciting update on the status of their long-awaited fourth studio album. In the comments section of a recent Instagram post, a fan asked how far along percentage-wise they were with completing the LP. “94.5%,” the band replied, as Stereogum points out.

Last September, the indie rockers said they were about “80%” of the way through. The new record serves as their fourth and the long-awaited follow-up to 2013’s Modern Vampires of the City. It also marks Vampire Weekend’s first full-length since the departure of founding member Rostam Batmanglij in early 2016.

(Read: CoS Readers’ Poll Results: Most Anticipated Albums of 2018) 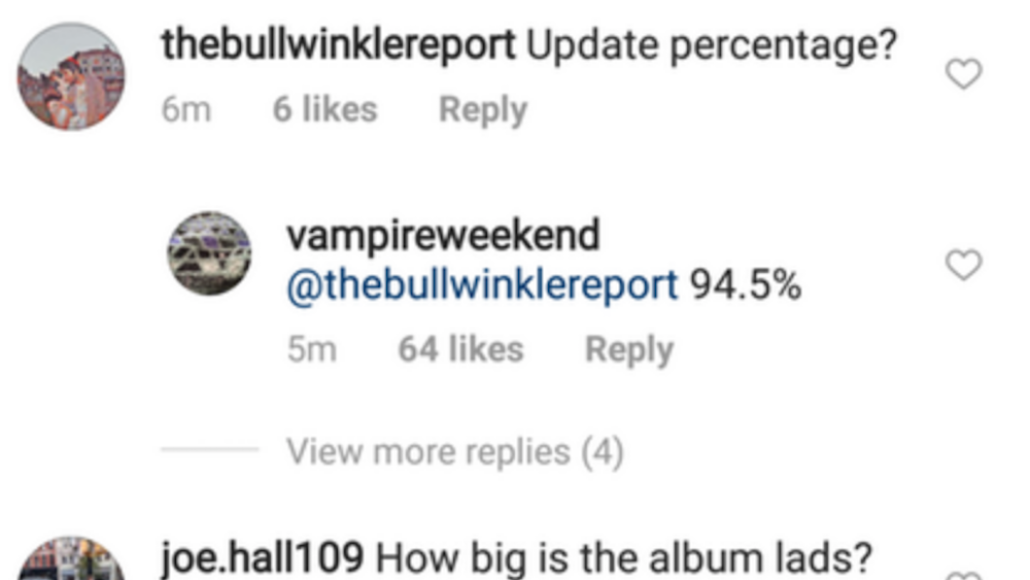 Adding to the hype, the band has shared the details of two intimate concerts at the Libbey Bowl in Ojai, California on June 16th and 17th. “Probably worth catching both,” Vampire Weekend teased in the announcement, all but confirming they plan to debut new music at these shows. A poster for the gigs includes Sony’s logo and an intriguing new swirly O-like band logo.

It’s likely Vampire Weekend will also debut new material at any of their upcoming festival appearances, including Lollapalooza, Fuji Rock in Japan, and the UK’s End of the Road.

Back in January, Vampire Weekend celebrated the 10th anniversary of their debut album.