Music, Movies & Moods is a regular free-form column in which Matt Melis explores the cracks between where art and daily life meet. This time, a father and son go the distance to a ballpark in the cornfields of Dyersville, Iowa. 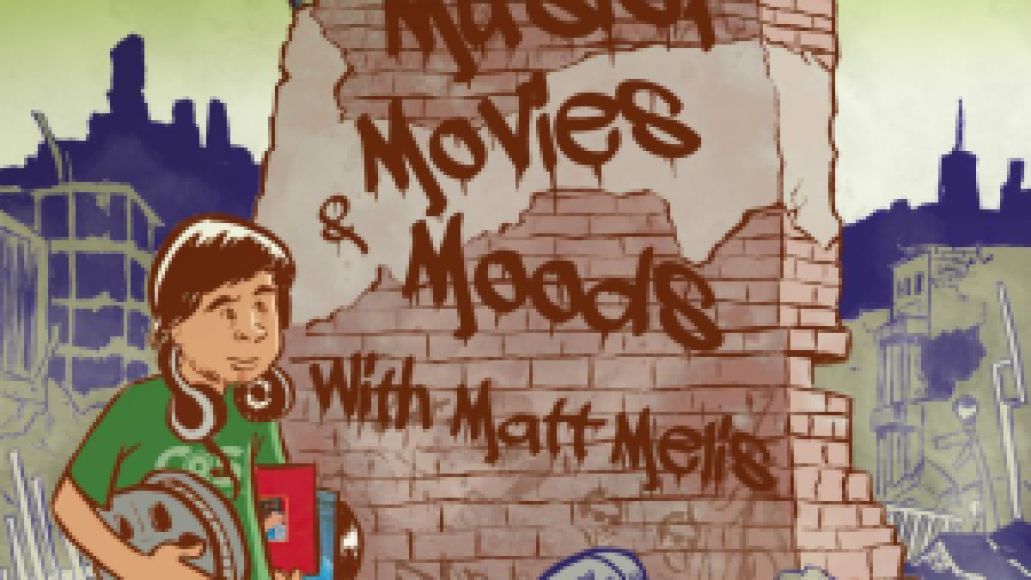 “You want to have a catch?”

It’s a question my father and I have asked each other thousands of times. Many, many times when I was very young and less often as I left boyhood and quickly grew to be my father’s height and taller. For a few years there, I’m sure it must have been one of the furthest questions from my mind, our ball gloves tucked away in the garage somewhere, dusty and out of sight. But leave it to life – and the little bits of wisdom we happen to grab hold of along the way – to send us back to the good, simple things. Out of college, in love, in debt, and trying to figure out what the hell to do with my life, I started asking that question again. As did my father. The best part about this particular question is that both of us know what the answer from the other will be: yes, always yes.

“You want to have a catch?” comes from Field of Dreams, of course, though fathers and sons have been saying it, or something similar, long before Kevin Costner ever started hearing voices, plowed over his corn crop, and turned the clearing into a ball field. Usually, when we ask this question, it means a trip out to the backyard or a local park. This time, though, it meant a trip to Dyersville, Iowa. That’s about three and a half hours from my Milwaukee home. Add to my father’s trip – at the wheel beside me – eight and a half hours from our family home in Pittsburgh. But that’s him: have son, will travel. 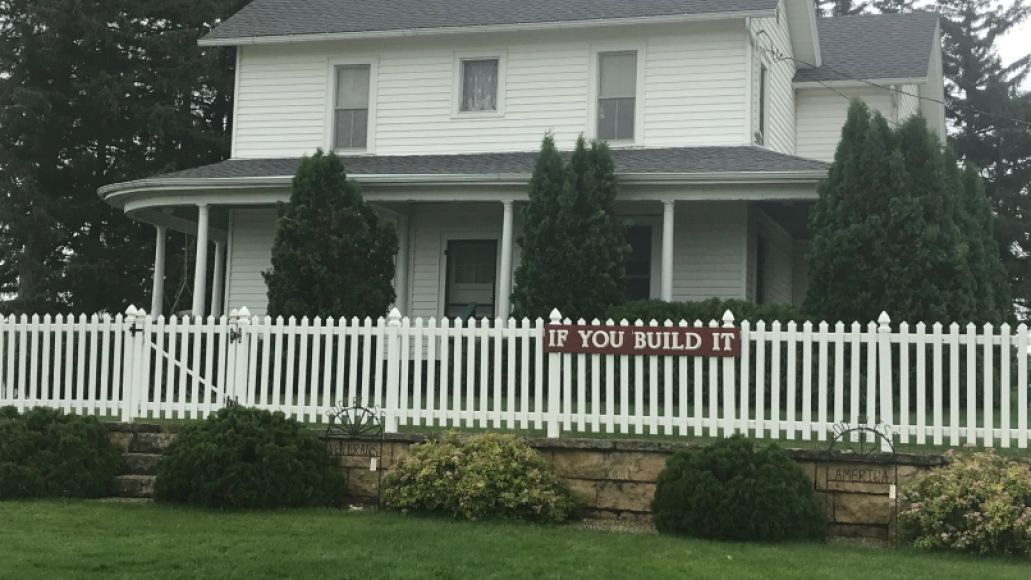 Dad had asked the question this time. He’s been a retired chemical engineer for a few years now and has started to figure out who he is without a full house and a daily commute. He chairs a local charitable foundation, jogs with a club twice a week, goes to movies, and give tours of PNC Park, where the Pittsburgh Pirates call home. (He can tell you things like where the park’s reddish warning track dirt comes from. Incidentally, dyed volcanic rock from Utah.) When he visits me in Milwaukee, he’s started taking extra time to travel along the coast of Lake Michigan, visiting decommissioned lighthouses. I bought him a certified U.S. Lighthouse Society membership – like a passport book – that can be stamped at each site he visits. “You’re official now, sailor,” I told him. I’m a smart-ass.

The free time has also allowed Dad to add to his bucket list – some of which inevitably involves my mother, sister, or me. One evening last winter, we were on the phone together, and I could tell that he was nervous about something. Finally, he asked me if I’d go to the Field of Dreams with him, hedging against disappointment by saying it was only an idea and not a big deal. Clearly, he had forgotten that the answer to the “catch” question is always yes. I agreed immediately and teased him for being nervous. “I thought you were going to ask me to the prom,” I ribbed. Like I said, a smart-ass. 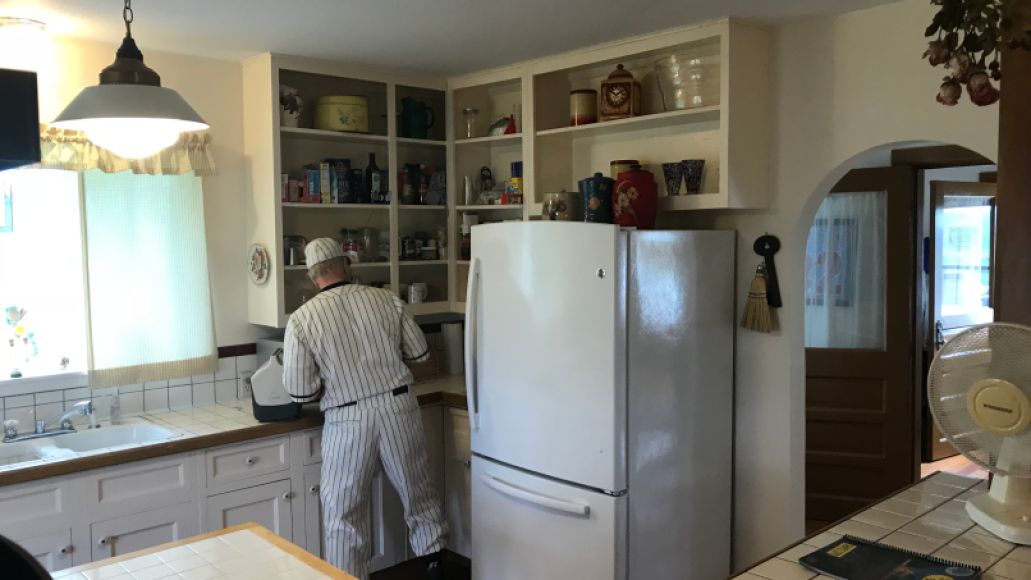 Ghost Player in the Kinsella Kitchen — Photo by Matt Melis

The night before we drove to Dyersville, we watched clips of Field of Dreams on YouTube. If you haven’t seen the film, its lone intent, I’m convinced, is to make grown men cry. (I feel the score sneaking up on me as I type.) Costner’s protagonist, Ray Kinsella — a cash-strapped rookie farmer with a hippy wife, tomboy daughter, and crippling regrets — receives a second chance to get things right with his deceased father. To make that happen, dead ballplayers walk, time unravels, and the universe, for once, connects all the dots. As, say, a 24-year-old, I scoffed at the solipsism and supernatural bent of the film. At 34, I know that more miraculous things happen each and every day for less meaningful reasons.

The road that leads to the Field of Dreams has been paved to accommodate “people coming.” The back road we took after making a wrong turn — a beaten path topped with crushed limestone that serpentines through cornfields and dairy country — somehow felt more appropriate. As I fumbled to hit play on the video on my phone cued to say, “If you build it, he will come,” we saw the farm step out of the distance. The light poles, the cornstalks, the ball field, the lean right up to the Kinsella farmhouse that looks no different than it did nearly 30 years ago. To drive up to the ball field feels like stepping out of the corn in the film – to all of a sudden find yourself in a very different place, a place that feels magical if only for being so very out of place. It’s the proverbial needle, the diamond, imbued with a wonder so strong that it makes you forget about the haystack or rough you’ve searched through and endured to find it. 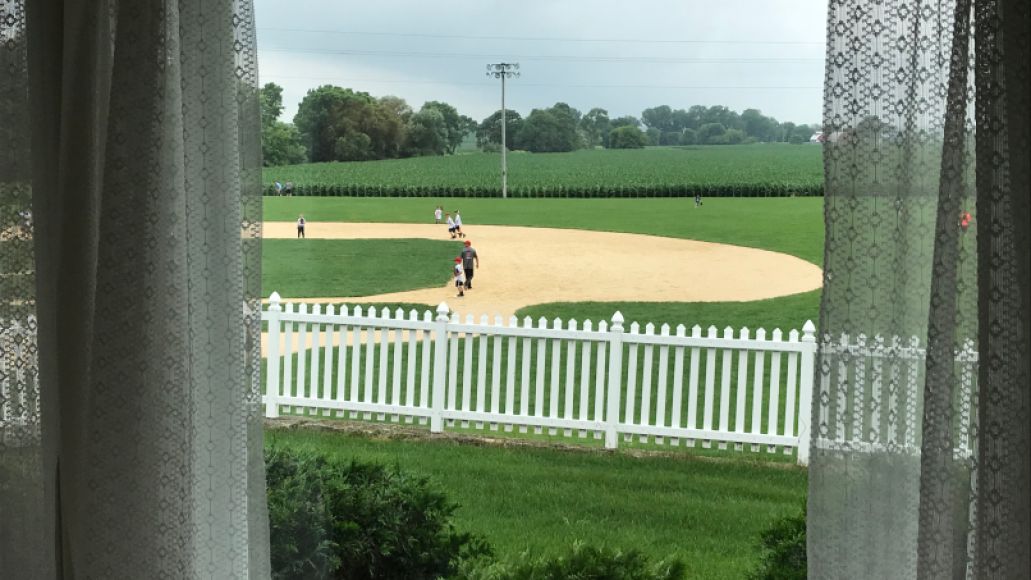 My father and I toured the Kinsella farmhouse. A tour guide named Clarence, dressed as one of the “ghost players,” told us everything we’d ever want to know about the production and pointed out the care that had gone into preserving the location. I watched Harvey play on a small, black-and-white television in Ray and Annie’s kitchen, learned that Ed Harris (Amy Madigan’s husband) had been “The Voice,” and stared out the same window Ray did when he first saw Shoeless Joe Jackson standing in shadows on the dark ball field. 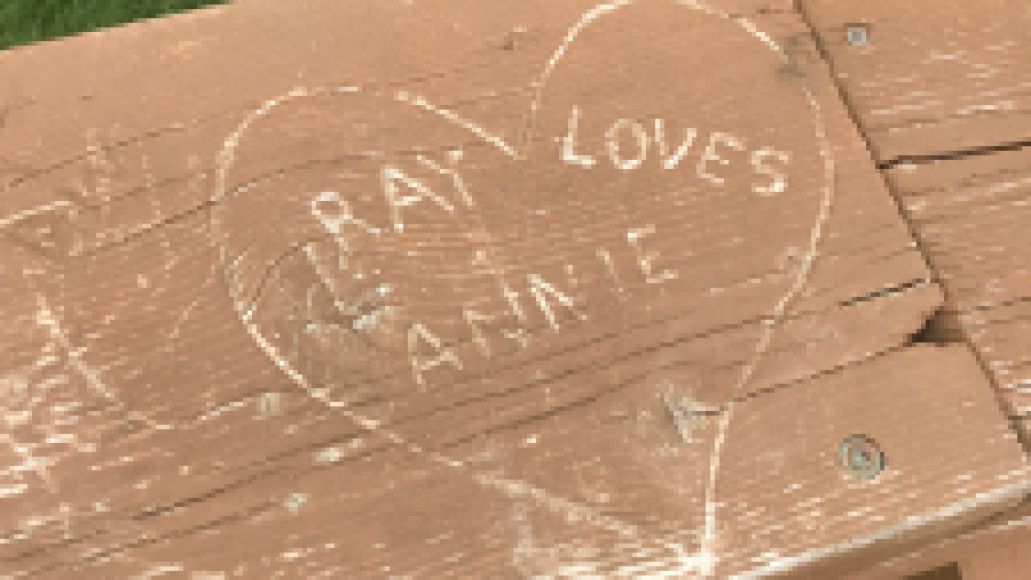 All the while we were there, a couple dozen adults and children found seats in the bleachers or a position on the diamond. Dad and I found a patch out near the corn in left field and lobbed a few back and forth. I thought about his father, who died a few summers ago just a couple months short of 102 years old. He had come to this country illegally to escape starvation in Greece and become a citizen after serving in the military. He fell in love with baseball in 1960, the year Bill Mazeroski and the Pittsburgh Pirates shocked the Goliathan New York Yankees led by Mickey Mantle. Dad had taken him to Pirates spring training years ago and still tells the story of his 90-something father darting across an outfield to get a souvenir batting practice ball. For his 100th birthday, he had been the guest of honor at a Pirates game at PNC Park. Dad saw his father on the day he died, a couple hours before he passed away during a nap. As we tossed the baseball back and forth, I thought to myself, they got it right. And baseball had been a large part of that.

Playing catch in a cornfield takes your mind to places like that. Field of Dreams is about a father and son getting it right in the end; it’s about second chances and the opportunities that can present themselves if someone will only take the first step. Watching fathers and sons, mothers and daughters, rotate across the field, take their swings, and pose like the ghosts emerging from the corn, I thought about how the same field that reunited Ray and John Kinsella onscreen was now allowing so many parents and children to get it right the first time around. Like my dad and his. Like my dad and me. 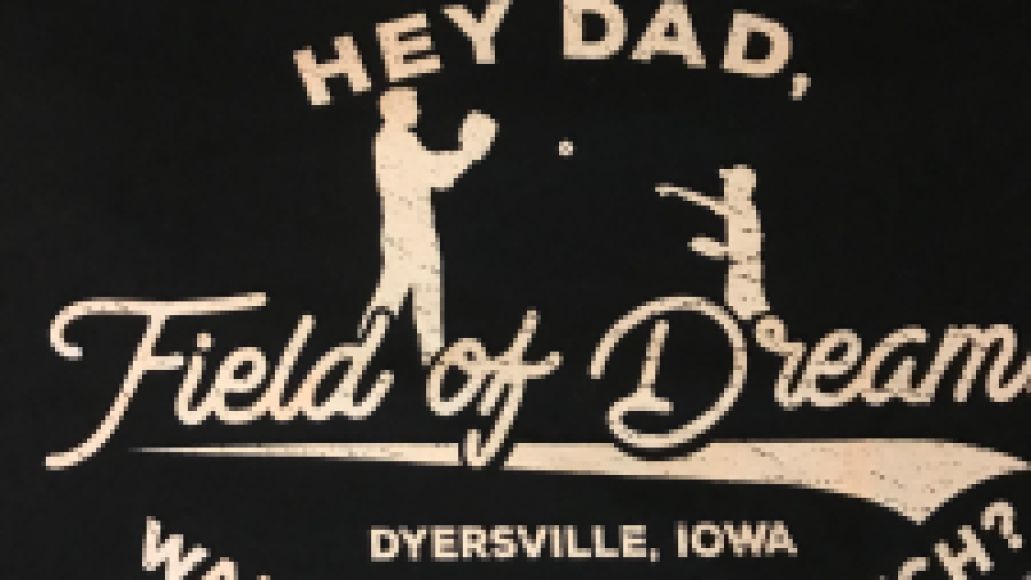 I thought about a lot between chatter as I took my turn driving home, leaving the Field of Dreams in our past. I’m now the age my father was when I first started sizing him up as a boy: using his leg as a yardstick to measure my growth, recognizing his daily arrival home by the crunch his pickup truck made as it climbed our gravel driveway, and learning what his large hand looked like clutching mine. It was also around that time I first overheard my father mention his holy triumvirate of successful travel: making good time, using correct change, and grabbing a bite to eat. We’ve joked about it for years, but not more than a week ago, I made a line of six or seven cars wait at least two minutes in a drive thru as I fumbled in a cupholder for seven pennies that turned out not to be there. The cashier rolled her eyes. Dad would’ve smiled – and kept looking for those pennies.

One thing I do struggle with is the decision I’ve made not to become a father. The thought that the game ends when Dad walks off into that cornfield, so to speak, saddens me sometimes. I feel like I have a great many innings left in this arm, far more than anyone can burn through merely as a son. But that falls on me then to find new fields, new games, and new ways to express love for others. That’s what “a catch” is, after all. It’s a way to say, “I love you,” even when the words struggle to come out – that is, when they need to come the most. 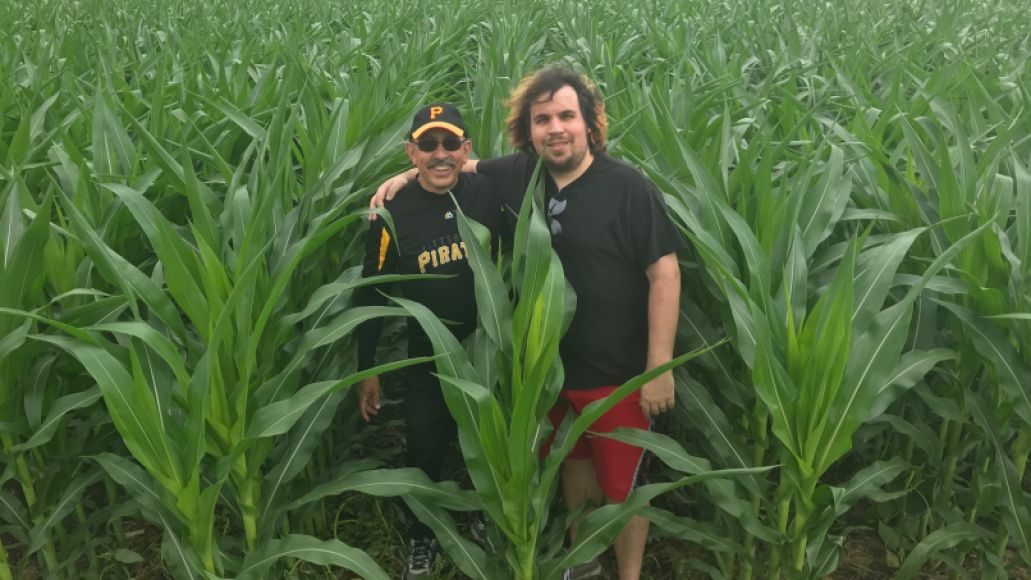 The words were never a problem for Dad and me, though. No matter how trying life could be, there was never anything between us that a few words over a catch couldn’t fix. I’m thankful we’ve gotten it right so far and continue to do so by doing things together like going to play catch in a ball field built in a cornfield in the middle of nowhere in Iowa. While the games of catch may be fewer and farther between these days and shortened in both distance and duration, I know that they still matter and what they will mean to me even when I’m my father’s age.

I imagine myself as an old man out in a cornfield, a park, or maybe just my backyard and hearing that familiar question call out: “Want to have a catch?” If I turn quickly enough, maybe I’ll just catch a glimpse of Shoeless Joe Jackson, my grandfather, or Dad. Or hear the sound of a ball popping a fresh-oiled mitt. To me, that’ll be a bit like Heaven. A dragging arm but no regrets.

A Father's Day at the Field of Dreams