On The Run II is officially live. On Wednesday, Beyoncé and JAY-Z kicked off their second collaborative tour with a performance at Principality Stadium in Cardiff, Wales. If you had sparkly outfits, “’03 Bonnie and Clyde”, and “Drunk in Love” on your bingo card, you’re in good shape. If you had covers of DJ Khaled and Ed Sheeran, congratulations, you’re a winner!

To be specific, the cover of the Grammy-hoarding ginger’s music is actually a Sheeran-Bey joint: “Perfect Duet”, a rework of Sheeran’s “Perfect” that’s way closer to actually perfect once Beyoncé is involved. The track served as the penultimate number, with Bey and Jay sweetly holding hands throughout the rendition.

The setlist also included a mashup of Bey’s “Diva” and JAY’s “Dirt Off Your Shoulder”; plus live renditions of Nicki Minaj’s “Feeling Myself”; Kanye West’s “Clique”, and Watch the Throne tracks “No Church in the Wild” and “Niggas in Paris”. Between songs, video interludes played that included shots from earlier this year of the pair on a trip in Jamaica with their children — clips that ranged from familial to downright sexy to blazing inferno.

It all unfolded on one of the largest stages in the history of concert tours, which included an interactive club right in the middle of the stadium with a capacity of 700, 17 dancers, a 26-person “vertical orchestra,” and a big-ass floating platform that moved over the crowd. In a nod to the infamous 2014 Met Gala incident with Solange, Beyoncé and JAY-Z even descended on to the stage via an elevator. In fact, the two didn’t shy away from their (very public) personal lives at all, as their merch included a shirt with the etymology of “fuckery” on it and a hoodie that listed moments in their relationship like “the confession,” “the love,” “the lies,” “the heartbreak,” and “the revenge.” Proving that they’d reached a new highpoint in their lives, the concert concluded with footage of the couple renewing their wedding vows and being baptized.

Watch fan footage and pictures from the evening below.

The European/UK leg of the OTR II Tour continues through July, while the North American leg kicks off on July 25th in Cleveland, Ohio. Grab tickets here. 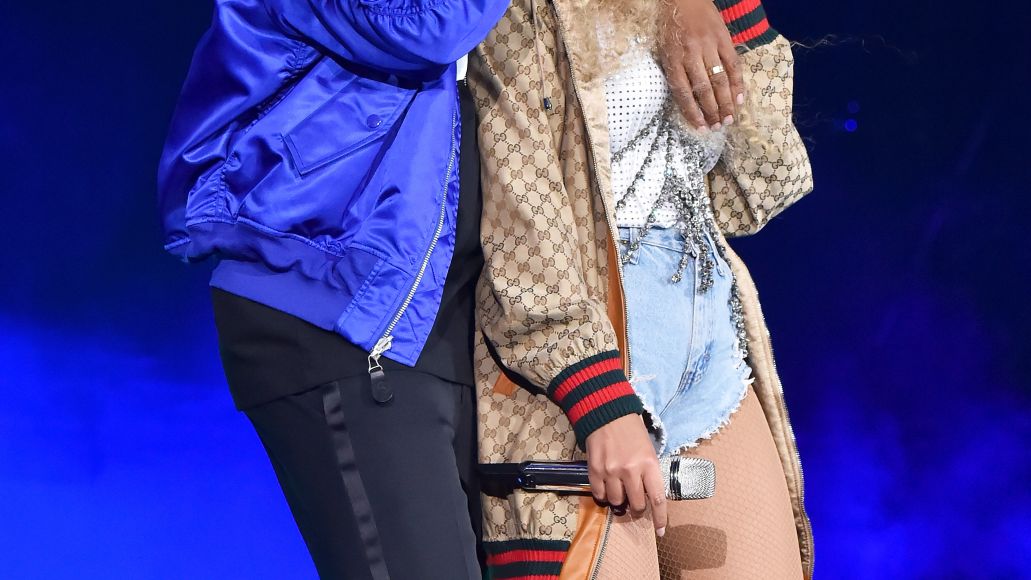