Maynard James Keenan has responded to allegations of sexual assault made against him by an anonymous Twitter user.

“Many thanks to those of you who saw right through this despicable false claim that only does damage to the #metoo movement,” Keenan said in a tweet posted Thursday. “And shame on those of you who perpetuate this destructive clickbait. As for my delayed but un-required response, I had my phone off. You should try it.”

Many thanks to those of you who saw right through this despicable false claim that only does damage to the #metoo movement. And shame on those of you who perpetuate this destructive clickbait. As for my delayed but un-required response, I had my phone off. You should try it.

Earlier this week a Twitter user named IWas17HeWas36 accused the Tool and A Perfect Circle frontman of raping her back in 2000 while aboard APC’s tour bus. At the time, Maynard was 36 years old and she was only 17 (hence the Twitter handle).

In a series of tweets, IWas17HeWas36 detailed how Keenan had targeted her during a Nine Inch Nails and APC concert, invited her backstage, and then led her to the band’s tour bus. “I went to see A Perfect Circle and NIN in the year 2000 with my high school boyfriend… We were looking forward to this all year as both of us were really huge fans,” she wrote.

“Maynard noticed me in the crowd,” she continued, which prompted the frontman to throw her a bottle of water. Later during APC’s set, a woman presumably from the band’s entourage came into the crowd and personally invited IWas17HeWas36 backstage. “Do you want to meet the band?” asked the woman. The invite was noticeably not extended to the accuser’s boyfriend.

They talked, and he autographed her hand. When she attempted to leave to catch NIN’s set, though, she said Keenan proposed they continue their conversation elsewhere. “He asked me how old I was. I said, ‘I’m 17.’ Then he said, ‘I can’t talk to you here, let’s go watch a movie’ and he pulled me away from everyone and onto a tour bus.”

IWas17HeWas36 claimed Maynard led her to a bed on the tour bus, put on Fear and Loathing in Las Vegas, and within minutes, began undressing her and himself. “All I could do was sit there, looking at the movie, unable to move,” she wrote. Maynard, still moving quickly, then allegedly raped her. “This was about raping me as fast as he could.”

“There was no consent made,” emphasized IWas17HeWas36. “He did not seduce me, he forced me, quickly taking advantage of my paralyzed state.” She said that “it took me years to process his actions,” and that she finally felt comfortable enough to tell her story in the wake of the #MeToo movement.

IWas17HeWas36 also claimed that because Maynard chose not to use a condom, he gave her a sexually transmitted disease, a strain of the human papillomavirus. She also said that later on, she’d heard from a friend that Maynard’s behavior was common. “I heard from a male friend that he did this in every city, at every show. He preferred underage girls,” she wrote.

The accuser has chosen to remain anonymous “out of fear” and backlash from Keenan’s fanbase.

Following IWas17HeWas36’s initial allegations, several other stories of Keenan’s alleged behavior were posted to reddit. These stories were also posted anonymously and are uncorroborated; and while none of them go as far as to accuse Keenan of sexual assault, they do trace a repeated version of events in which Keenan identified and invited female fans backstage.

In his 2016 autobiography, A Perfect Union of Contrary Things, Keenan acknowledged his previous “sexual experiences with groupies.” When asked whether he ever felt like he was “becoming the rock ‘n’ roll cliche that you hated,” he told the Phoenix New Times: “Well, yeah. But you don’t care because you’re having fun.”

In his autobiography, Keenan also discussed how his mother’s own history of sexual abuse influenced some of Tool’s lyrics.

Find screenshots of IWas17HeWas36’s allegations below.

Consequence of Sound is working to independently fact check the various allegations made against Keenan, and will post further updates as they become available. 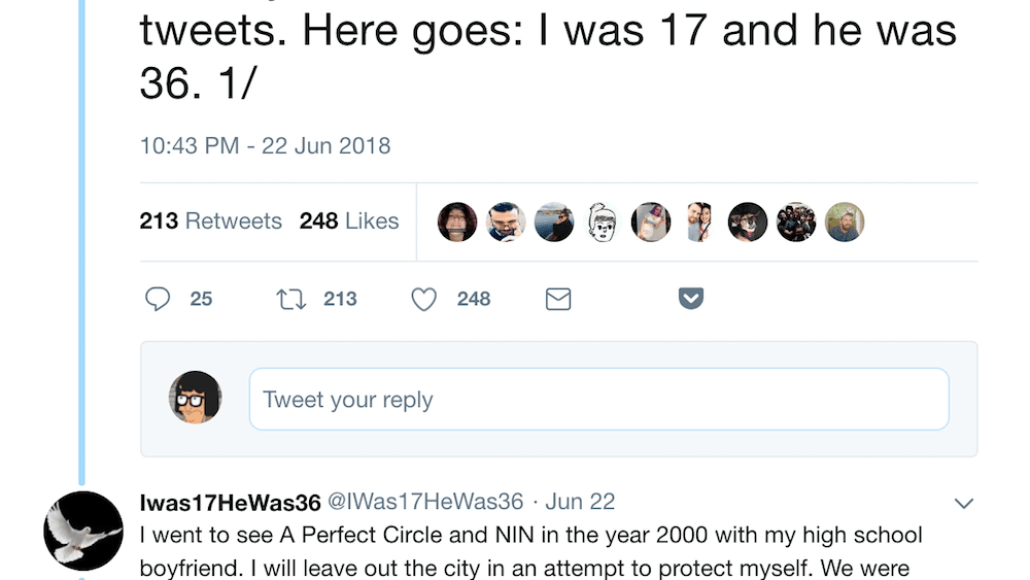 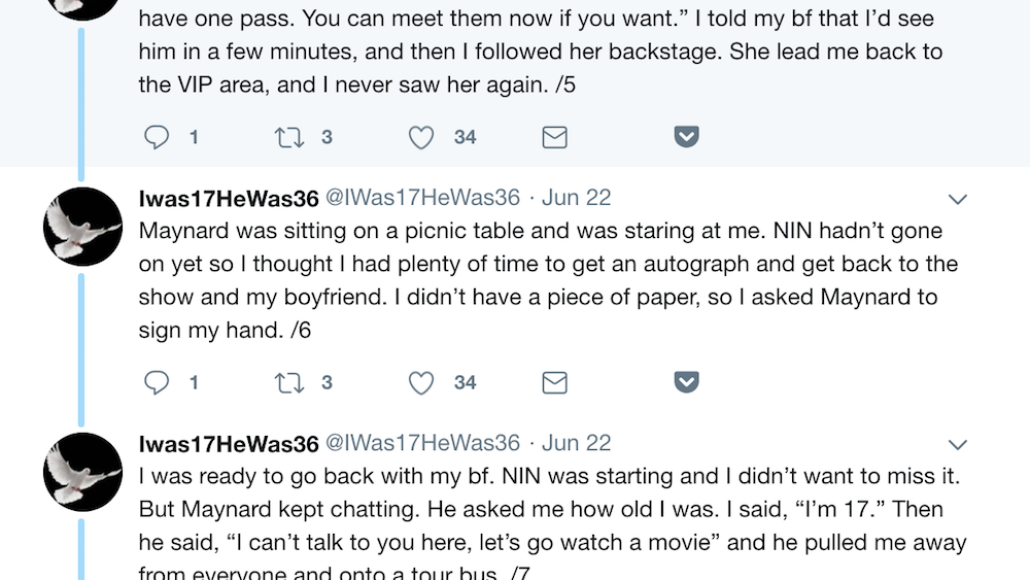 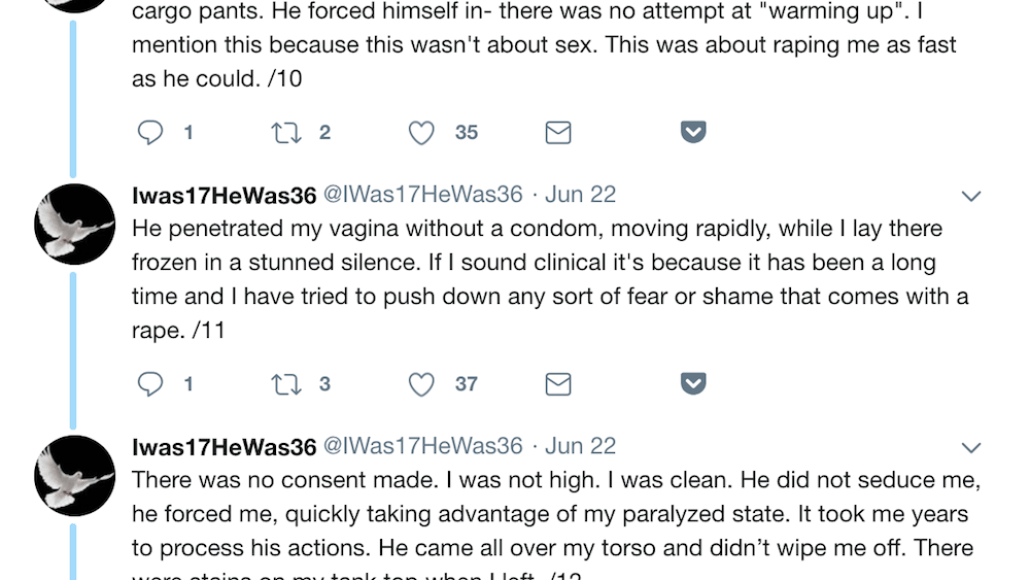 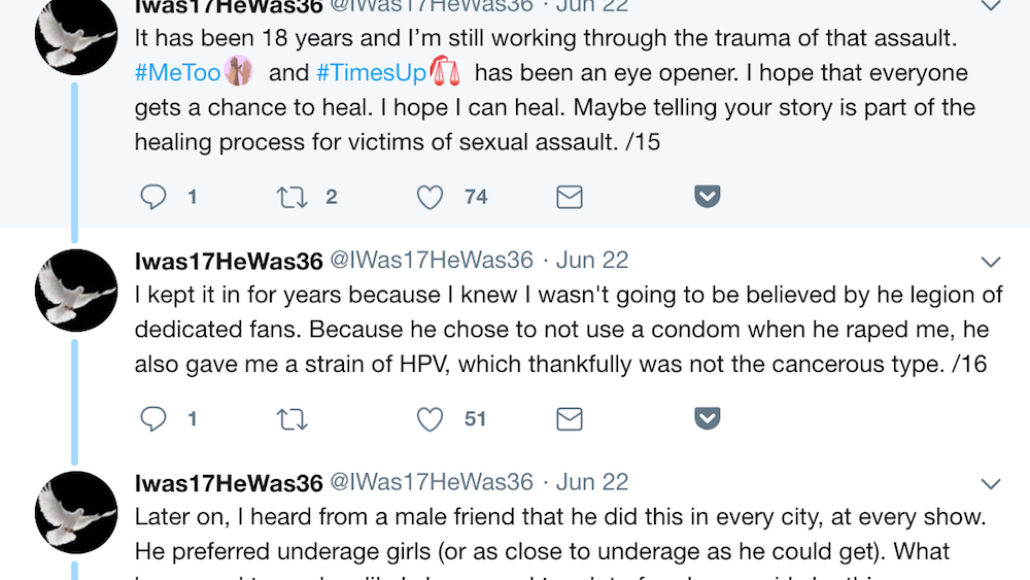 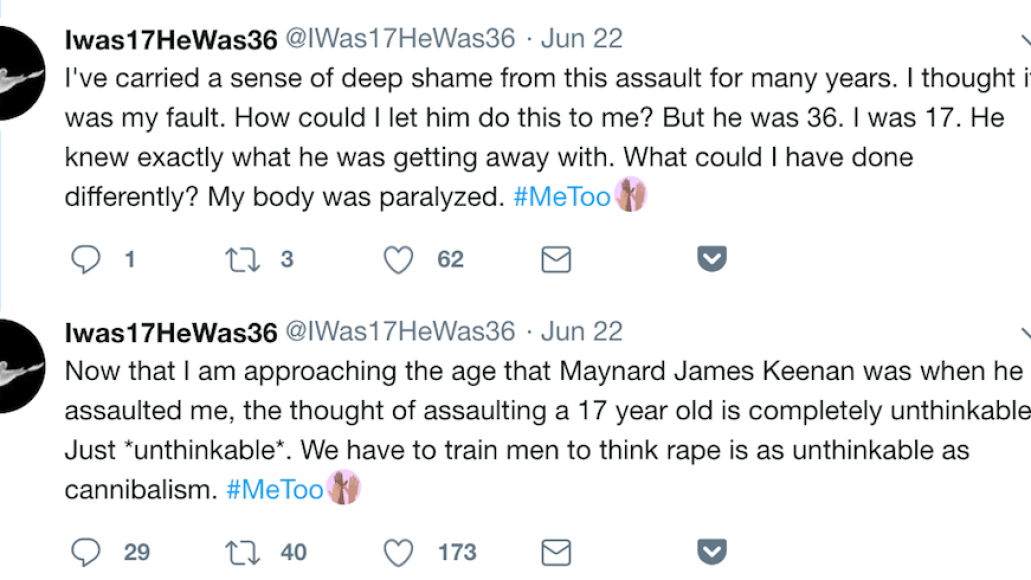 Maynard James Keenan responds to sexual assault allegations: "This despicable false claim only does damage to the #MeToo movement"