Last Thursday, May 31st, Ticketfly was forced to shutdown its website due to a “cyber incident.” Per Pitchfork, services were brought back online Saturday, June 2nd, but the damage was already done. In a statement at the time, Ticketfly claimed “some customer information has been compromised as part of the incident, including names, addresses, emails, and phone numbers.” Now, as Engadget reports, the supposed hacker behind the attack has leaked a ton of this private data to a public server.

Engadget’s report is based on the investigations of Troy Hunt, a web security expert and the founder of Have I Been Pwned, a website which allows you to check whether your email address has been leaked. According to Hunt, at least 26,151,608 Ticketfly email addresses were found in the files the hacker uploaded to the server. Many usernames and phone numbers, as well as home and billing addresses were also part of the breach.

Ticketfly customers’ credit card information and passwords aren’t believed to have been compromised. However, that could soon change as the hacker has threatened to upload more files, “presumably if their ransom demands are not met.”

Prior to the “cyber incident”, Motherboard reports the hacker had notified Ticketfly of a security flaw, and then requested a ransom of one bitcoin in exchange for a fix. When the hacker didn’t receive the ransom, it was then that the ticketing website was hit.

As of publishing, the Ticketfly website and app are down again.

Ticketfly was founded in San Francisco in 2008. In 2015, it was purchased by music streaming platform Pandora in a $335 million cash and stock deal. Two years later, it was then bought by event management and ticketing site Eventbrite. 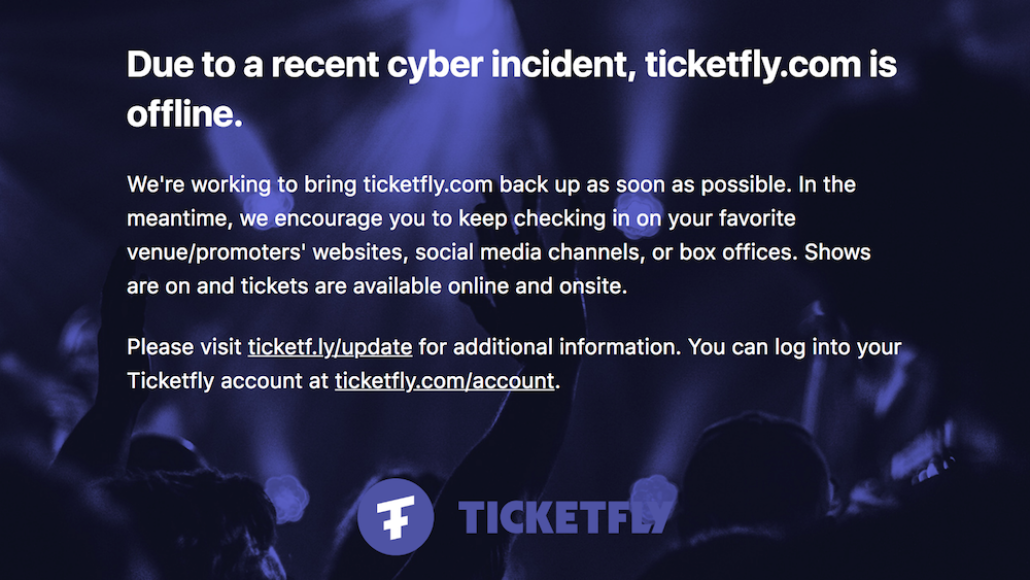