The idea of GLOW as a modern-day TV series was sound from the start. Based on the cult-beloved, short-lived ’80s wrestling series, showrunners Liz Flahive and Carly Mensch aimed to speak truth to the fraught present by reaching back into the neon-soaked past, through the lens of a kitschy, local-access series populated by struggling career actors, washed-up genre filmmakers, and even a legitimate wrestler or two back when professional wrestling was far more hostile to women than it is in its still-fairly-hostile present. Through this, Flahive and Mensch were able to make a delightful first season out of the show’s initial rise to prominence, using a familiar underdog story structure to comment on everything from abusive relationships to misogyny in the television industry to the ways in which families can form between people otherwise drifting through life as strays.

Critically, however, not a single character’s problems were actually solved at the end of the first season, even as GLOW (the show within the series) got a broadcast deal through the small-time LA station KBTV. When the second season picks up, everybody is still in flux, still trying to suss out their sense of purpose through a bizarre, frequently offensive wrestling show. Debbie (Betty Gilpin) has finally split away from her frustrating ex-husband, but now has to deal with the gravity of actually separating, for good, from the father of her infant child. Ruth (Alison Brie) wants to make greater creative contributions than Zoya the Destroyer to the show, but keeps slamming her head into glass ceilings. Sam (Marc Maron) might have landed a broadcast deal, but it’s tenuous at best, and his insecurities about his dominion over the show only continue to grow when he’s quickly forced to deal with a network that won’t stop butting into his business and a roster of women who seem to quickly be growing tired of working the cheapest, most base-level xenophobic gimmicks possible.

Everybody in the second season of GLOW is looking for something, and one of the biggest improvements the series has made between seasons is its willingness to slow down and focus on individual characters, instead of retaining the mile-a-minute ensemble pace of its rookie season. There are a number of moving stories presented throughout the season, and once again Flahive and Mensch have found a way to balance the generally jovial tone of the series with some genuinely affecting stories. Where the first season tackled everything from abortion as a practical lifestyle concern to the pains of decimated friendship, season two takes a much wider view of the world in which Sam’s show exists. After all, he’s not simply making “his art” in a vacuum, and given the deliberately exploitative nature of the show, something’s bound to go wrong sooner or later.

The standout fourth episode, “Mother of All Matches”, takes a particularly compelling view of this, by splitting into dual stories to follow both Debbie and Tammé (former legendary woman wrestler Kia Stevens) through their final day leading up to their big main event against one another. As Debbie struggles to balance her new career with the lingering feeling that she made a mistake in leaving her philandering husband, and Tammé struggles to explain to her Stanford-attending son why she’s playing a character named “Welfare Queen” on local-access TV to make ends meet, the show finds its footing for its sophomore outing in the messy humanity behind the gimmicks. There’s a bracing irony to most of the casting choices within Sam’s show, and the new season does a largely excellent job of teasing them out. After all, everybody wants to be somebody else. Debbie wants to fast-forward to being the divorcee with her affairs in order. Ruth wants to be Debbie’s best friend once again. Carmen (Britney Young) wants to be a star of the show and not just the workhorse in-ring trainer. Arthie (Sunita Mani) wants to play a character that doesn’t purposely incite the crowd’s hatred against her. Sheila (Gayle Rankin) wants the show’s small, increasingly weird cult of fans to stop noticing her. Even Bash (Chris Lowell), the show’s gregariously coked-up producer, has his own secrets and grander aspirations.

GLOW is still very much structured as a hangout series, and as was the case through its first frame, some of the season’s best and most poignant material emerges in the quiet conversations between matches and backstage as friendships are made and tested. There are a couple engaging new faces, but wisely few; Yolanda (Shakira Barrera) arrives to replace Cherry (Sydelle Noel), who’s landed a lead role on a small-time cop show, and the increase in production value for Sam’s new season means that Ruth finds a new love interest in Russell (Victor Quinaz), who got out of shooting porn to enter the more reputable world of pro wrestling. By keeping the introductions to a minimum, GLOW is able to focus on its strongest aspect: the rapport between its wonderful ensemble. The still-caustic relationship between Debbie and Ruth is once again foregrounded here, with Gilpin and Brie making a particular meal out of one emotionally searing post-match argument that stands as a season highlight, but there are a number of pairings throughout the new season that make for great television, particularly the growing friendship between Yolanda and Arthie, Sam’s ongoing paternal struggles with both his actual daughter Justine (Britt Baron) and his metaphorical one Ruth, and Carmen’s increasing role as a den mother of the troupe.

Although a couple of the B-plot regulars are granted their moments to shine throughout (Lowell has a running side story throughout the season that’s a moving reminder of the era in which the show takes place, even if it’s treated a little too much like an afterthought at times), GLOW still belongs to the show’s central trio, all of whom once again do stellar work in emotionally complicated roles. Maron further expands Sam beyond a caricature of Maron’s own hellion days in the ’80s, now turning him into the kind of filmmaker who’s been around long enough to finally work out that maybe there’s more to life than chasing a stubborn, uncompromising vision of art. This isn’t to say that he stops being something of a bastard; there are multiple points at which Sam dances on the line of true irredeemability once again. But particularly in his scenes with Brie, there’s a delicacy that emerges from his performance, and that’s not often a way that Maron finds himself described. Sam is who he’s going to be forever, and much of the second season is built around the people in his life working out for themselves whether they can handle it or not. 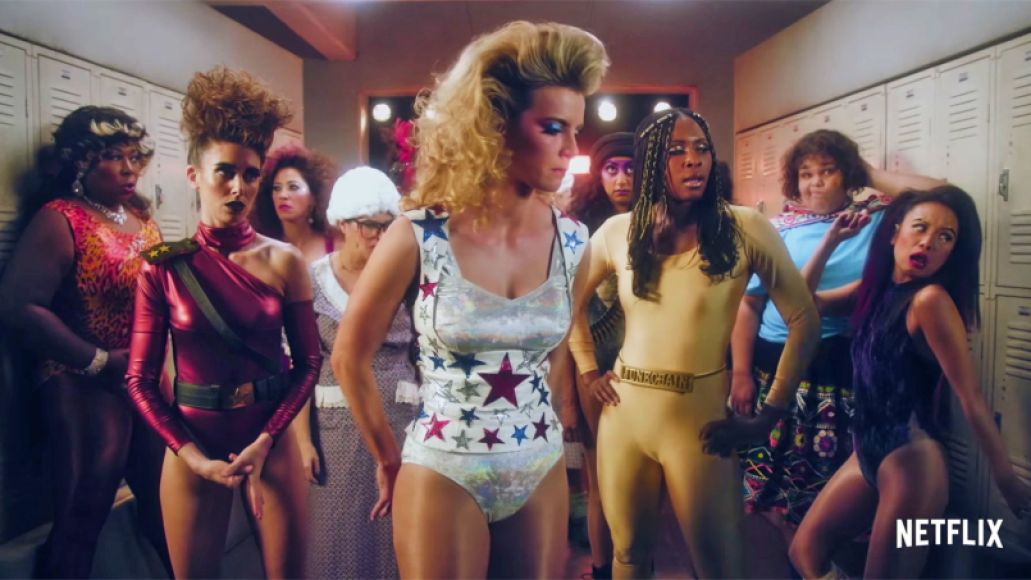 As the show’s emotional core, so much weight is placed on Gilpin and Brie, and yet again they make for a pitch-perfect tandem. Ruth’s overachieving-student act has always belied a genuine need for approval, and when she’s harshly reproached in front of the entire cast for going rogue and shooting an episode intro in the season premiere, you can practically see the insecurities that Zoya helped her overcome beginning to worm their way right back. That Debbie is still vacillating between missing Ruth and wanting to torture her for what Debbie sees as the destruction of her settled lifestyle hardly helps; the show doesn’t forget what drove Debbie and Ruth apart in the first place, and it doesn’t cheat on the emotional stakes of just how difficult a resolution to that divide would be. Gilpin is one again the season’s MVP, her private struggles existing at constant odds with the take-no-shit hand she applies to GLOW in all aspects of its production. A lesser show would’ve turned Debbie’s post-divorce tailspin into the stuff of Cathy comic histrionics, but Gilpin brings a terror and panic to many of Debbie’s quieter moments that elevates the episodes surrounding her into some of the season’s best.

GLOW doesn’t just tackle difficult material with its rolling storylines, however; once again, as with the first season, the show addresses the world in which a show like GLOW could come into being. If those attempts are occasionally haphazard, sometimes they’re also as effective as any social commentary on television this year. One episode begins with a discussion about the hazards of creepy fans and ends with the beginnings of a distinctly Weinstein-ian business meeting in a private bungalow; another considers, as the show often does so well, how two women with genuine personal issues being pitted against one another so often only ends in suffering for both. Both the ’80s GLOW and the Netflix series hardly exist in a vacuum, independent of the larger cultural issues of the time, and GLOW once again manages to deal with heady and often brutally current material, through a neon-drenched sheen.

Yet at its core, GLOW situates itself as an escapist comedy invaded by the troubles of reality, and it’s great at being precisely that. Flahive and Mensch have such an evident love for every character in the series’ world, down to even the most infrequent players, that it’s impossible after a while to avoid falling in love with most of them. Working with a clearly bigger budget this time around, the show goes wild with period details and stylistic choices, and why wouldn’t it? Like the dreamers at its center, GLOW is at once hilarious and tragic, breezy and poignant, and totally committed to becoming the best version of itself that it can be. If the jerks and genuine monsters of the world would just get out of its way, that is.