Beyond the Gates: When fans look back at Panorama 2018, they’re just as likely to remember who they didn’t see as they are to look back fondly on a particularly great set. Not a single day of the festival went by without at least one cancellation, thanks largely to some severe weather that rolled through New York on Friday. Day 1 was scrapped and evacuated around 5 p.m. — before many attendees even arrived onsite at Randall’s Island Park — and sets by Father John Misty, The War on Drugs, Migos, The Weeknd, Charlotte Gainsbourg, Dua Lipa, and more were all canceled.

On Saturday, half an hour after he was supposed to hit the Panorama stage, the festival announced Lil Wayne’s flight was delayed and that he wouldn’t be making it into New York in time for his set. Then on Sunday, Greta Van Fleet took to Twitter to announce they wouldn’t be able to perform because their drummer has been playing with injured fingers and reached a point where he can’t pick up a drumstick. Despite all that disappointment, the rain held off on Saturday and Sunday, and there was still plenty to enjoy. 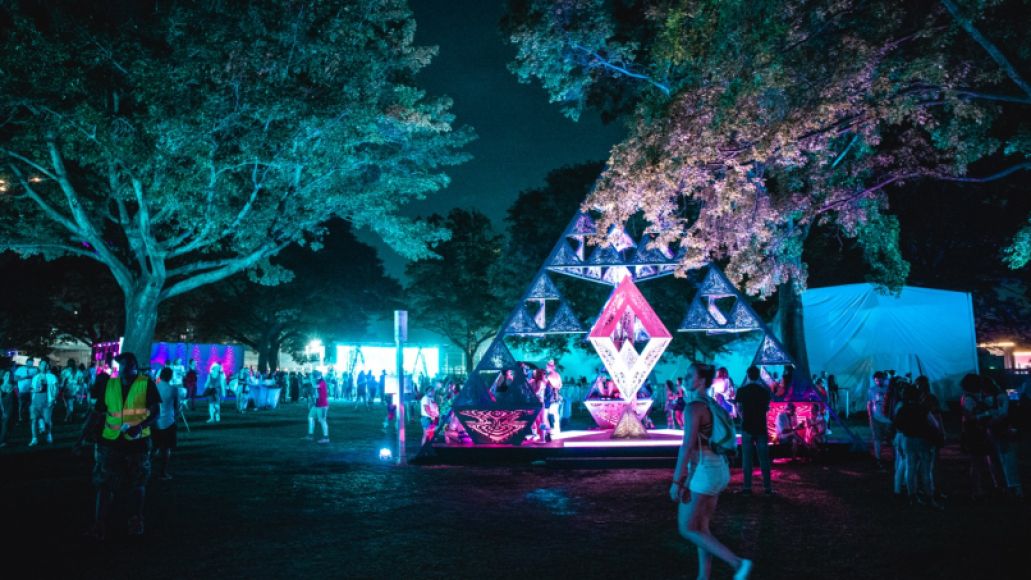 Best Bites: Look, did I feel like a big, dumb idiot carrying around a watermelon at a music festival? Sure. But if you’re looking for a delicious, eco-friendly way to hydrate and snack at the same time (both essential things to do when you’ve been out in the sun all day), you can’t beat John’s Juice. The company — which can normally be found at Gansevoort Market on 14th St. and at the Williamsburg and Prospect Park Smorgasburg on Saturdays and Sundays, respectively — prides itself on its “all juice, no cups” policy, serving all their blends with paper straws inside the fruit of origin to eliminate waste. At Panorama, you didn’t have to look far to see people beating the heat by toting around a pineapple, watermelon, coconut, or dragon fruit.

Festival Fashionista: Glitter seemed to be the big trend for Panorama-goers this year — thanks at least partly to the Sephora tent, where you could literally stick your arms into a vat of the shimmery stuff to dig for a prize — but I have to give a special shoutout to one of Rex Orange County’s horn players, who was sporting an extremely good Key & Peele-inspired “Ya Done Messed Up, A-A-Ron!” t-shirt. 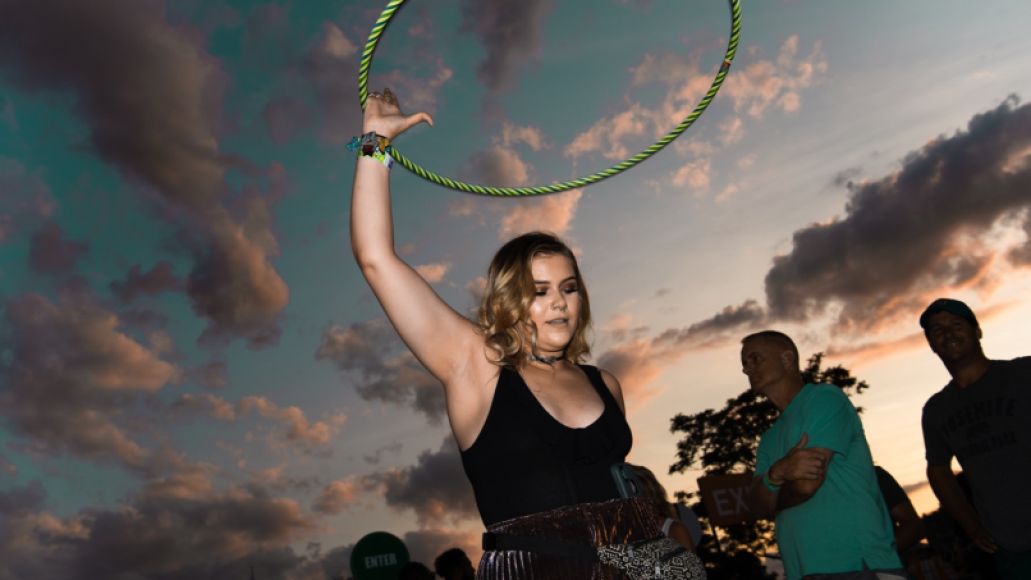 Best Looking Out: Speaking of Rex Orange County, he deserves a tip of the cap for the level of concern he showed for fans’ safety during his set. When someone in the crowd passed out, he stopped mid-song to ask if they were okay and call for a medic. He waited a while before resuming, too, watching security and medical staff make their way to the person and asking multiple times if they were alright. Finally, he finished the song, but not before a self-aware “Uh, I guess I’ll carry on then” and one more “Is everyone doing okay?” for good measure.

Chained to the Rhythm: This one’s gotta go to the Queen of the Rhythm Nation herself, Janet Jackson. Her headlining set on Saturday night was full of intense choreography and dance breaks, and it was easy to forget that the iconic singer is now 52 years old. She’s still got the moves and an impressive stamina that allows her to hit them better than artists decades younger than herself. (For perspective: I am roughly 20 years younger than Janet Jackson, and as I type this, I’m a sore, blistery mess just from standing all weekend.) 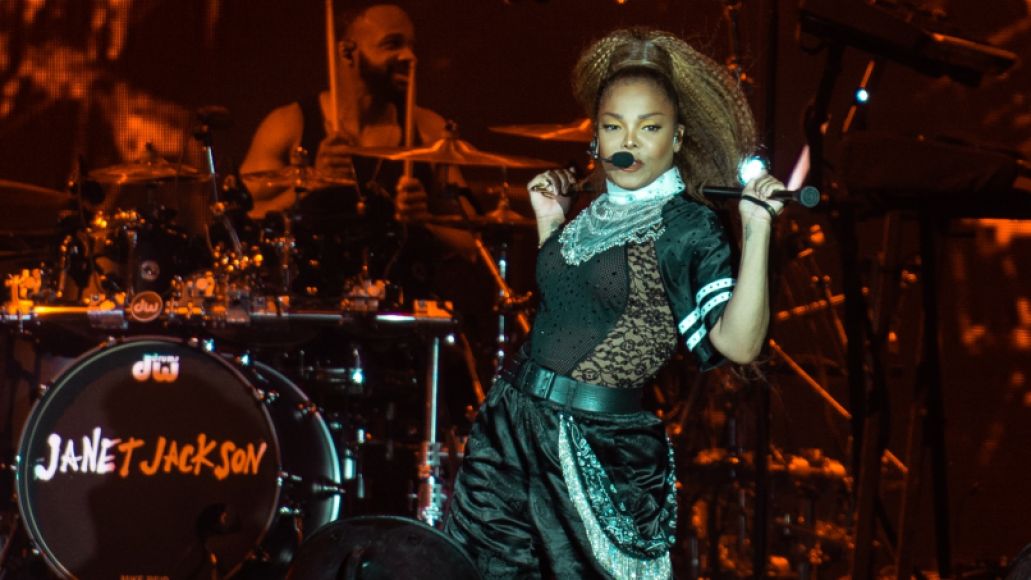 That One Performance: You can’t beat St. Vincent. For her Saturday night set, Annie Clark cycled through a seemingly never-ending supply of her signature Ernie Ball guitars in every color you could ever want (blue, orange, neon pink, white, yellow, black), and she was masterful on each one. She got the crowd moving on MASSEDUCTION gems like “Los Ageless”, “Pills”, the title track, and “Dancing with a Ghost”, as well as older favorites like “Marrow”, “Cruel”, and “Cheerleader”. Fittingly, she closed with a partially a capella version of “New York”, amending the “If I called you from First Avenue” line for the locals with mentions of St. Mark’s Place and Veselka and laughingly lamenting that nothing rhymes with those places. 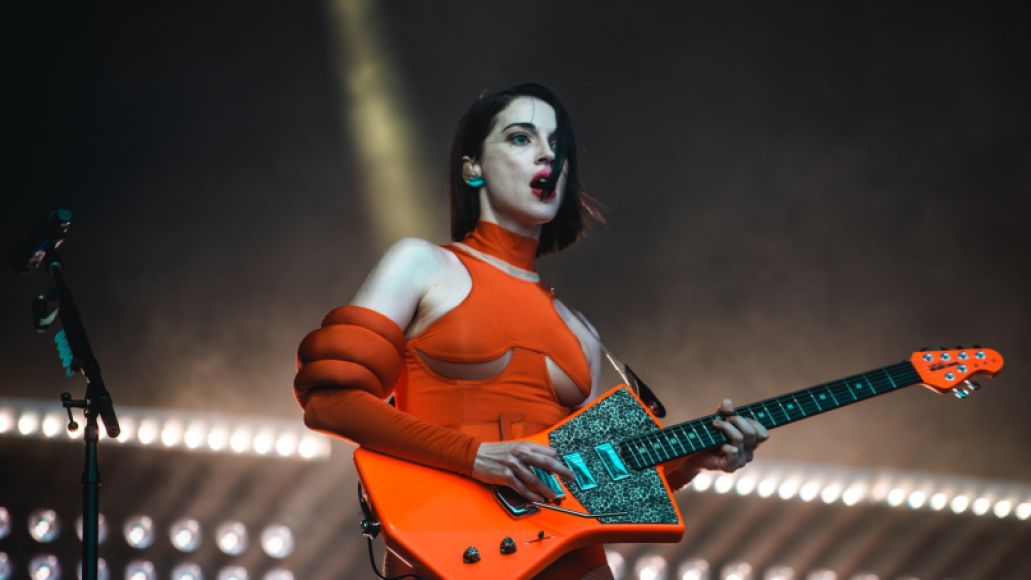 Best Cover: Japanese Breakfast turned in a really great performance of The Cranberries’ “Dreams” on Saturday, but the most stunning cover of the festival had to be David Byrne’s take on Janelle Monae’s “Hell You Talmbout”. Earlier in his set, the Talking Heads frontman took a moment to urge everyone to register to vote (and to be sure to vote in small, local elections as well), and he prefaced his cover of Monae’s protest song by saying, “She wrote this song in 2015, and she performed it at the Women’s March, and sadly, it is still very relevant today.” Byrne updated the lyrics — names of African-Americans killed by police or vigilantes — to include recent tragedies like the murder of Nia Wilson, and it was extremely powerful (and infuriating) to realize how many more names have been added to the list in the three years since Monae wrote the song. 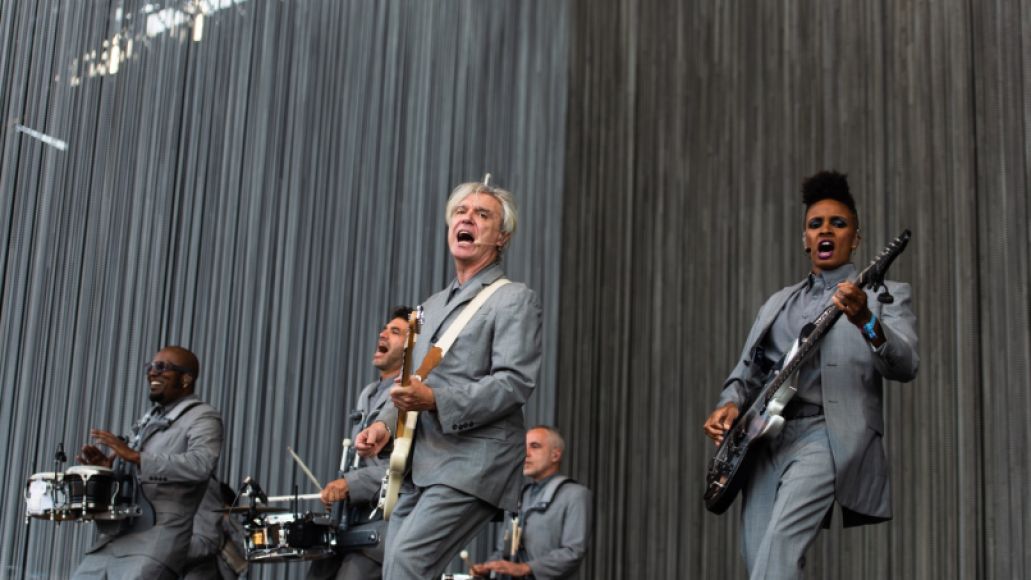 Don’t Believe the Hype: Maybe it’s the schedule I carved out for myself, or the fact that I already hit my disappointment quota with Friday’s cancellation, but I didn’t see any duds this Panorama. Even Gucci Mane, whose set was marred by power outages and technical difficulties, soldiered through and made the best of the situation, offering up an a capella version of “Lemonade”. So, I guess I’ll give this distinction to Lil Wayne for not showing up.

The Best of the Tiny Fonts: Norway’s Sigrid played the Pavilion Stage on Saturday afternoon, and she was all smiles for the majority of her set. She may have been basking in the recent release of her second EP, Raw, but her performance of older tracks like 2017’s “Plot Twist” or her breakthrough “Don’t Kill My Vibe” got the crowd going and allowed her to feed off of their energy. I’d be willing to guess this is one of the last times you’ll see her on the small stage. 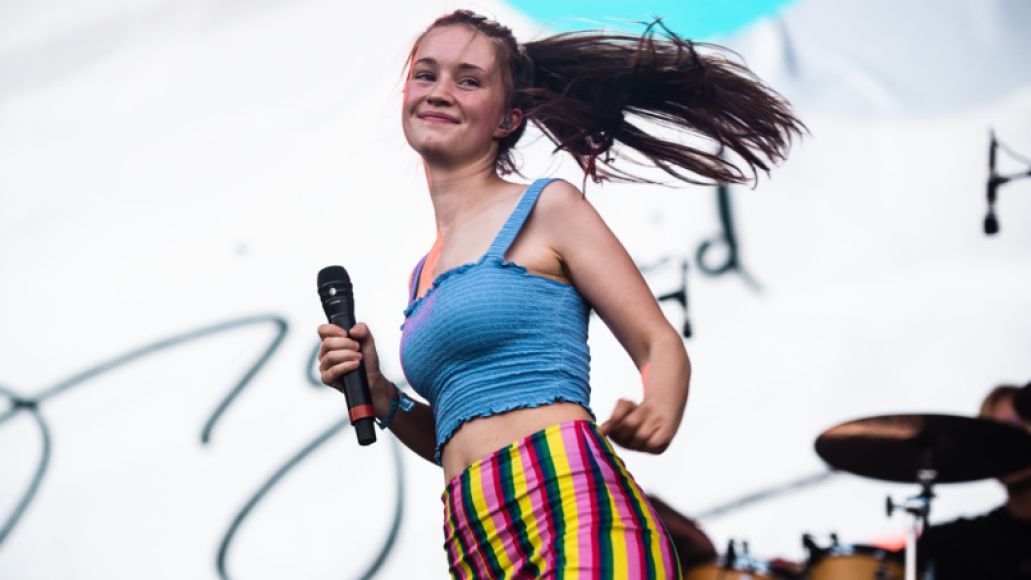 Why Can’t We Be Friends: The best surprise collaboration of the festival came in the middle of The Killers’ Sunday night headlining set when they brought up a young fan to play the drums on “For Reasons Unknown”. The kid was holding a sign asking to play bass on the song, and when frontman Brandon Flowers spotted him, he said, “I think I wanna play bass on this one,” but offered the fan the opportunity to sit in behind the kit instead. Flowers milked the decision, asking him: “Do you know all the stops? Are you from New York?” (When the fan admitted he wasn’t a local, Flowers laughed and said, “I appreciate your honesty.”) The fan settled for drums instead of bass and killed it, much to the delight of the crowd, and got to walk away with the sticks he used for posterity.

Best Video Montage: The highlight of Saturday night’s set was obviously Miss Jackson herself, but Janet Jackson’s video intro is also worth mentioning because of its powerful political message. The clip featured audio of reporters discussing racial injustice, white supremacy, and domestic terrorism while displaying the names of unarmed African-Americans killed by the police and concluding with the declaration that “WE WANT JUSTICE.” Later in her set, Jackson also used the video screens to pay tribute to her late father, Joe Jackson, during “Together Again”, displaying photos of the two of them together throughout the years. 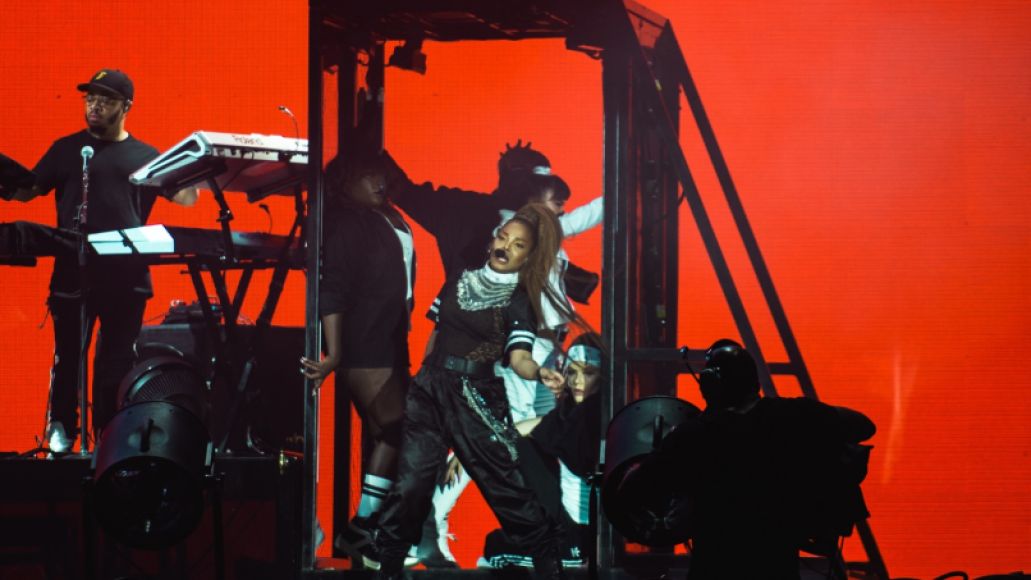 Phones Up: It’s not surprising, but the phones were up and recording every moment of SZA’s main stage performance on Saturday night. Her set focused on tracks from her undeniably great Ctrl, and despite nearly going over her allotted time (“We’ve got five minutes!”), she dealt with the constraints of a festival set remarkably well, managing to work in some great banter in between hits like “Love Galore” and “Drew Barrymore”. 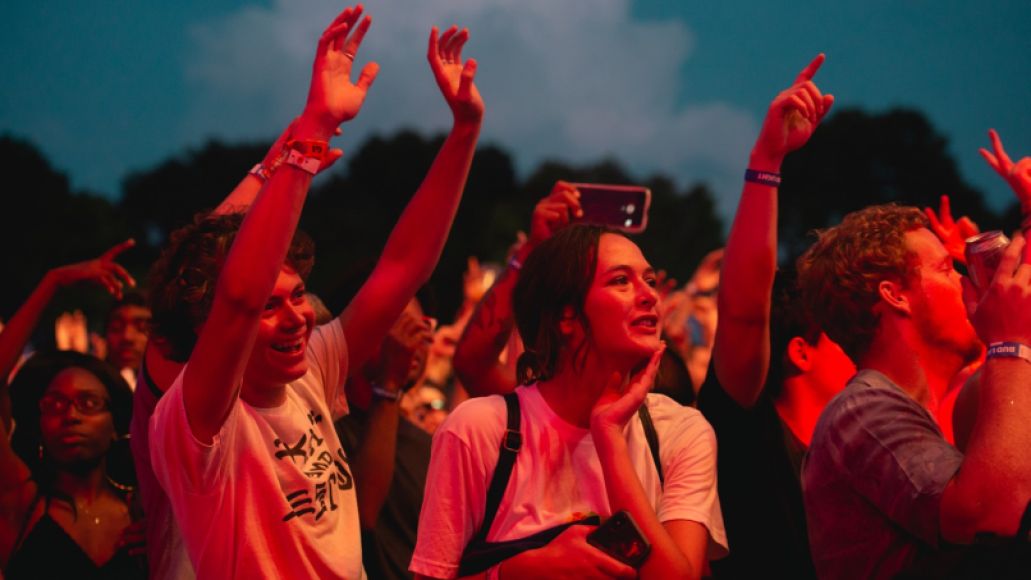 Coming Home: This year’s Panorama was marred by bad luck, between Cardi B having to pull out (only to be replaced by Lil Wayne, who also ultimately was a no-show) and having an entire evening rained out, but despite the difficulties the weather caused, days two and three of the festival featured some excellent performances from a healthy mix of buzzy new acts, classic artists, and festival staples. Fans who braved the mud left by Friday’s storm were rewarded with some truly great sets. But let’s hope for clear skies next year.