It’s a bittersweet weekend for American music festivals. On Thursday, Lollapalooza will return to the skyscraper-lined confines of Chicago’s Grant Park for its 14th incarnation as one of America’s premier destination festivals. Three days later and 1,200 miles away at the Coral Sky Amphitheater in West Palm Beach, FL, the Warped Tour will end its streak as America’s last remaining ’90s touring festival with a final day of punk, ska, and (presumably) tears.

While truly comprehensive accounts of the impressive runs of Lollapalooza and Warped Tour, as well as the decade-long history of ’90s touring music festivals, could fill two different (and equally essential books), a brief look at the festivals’ shared origins in the soon-to-be-bygone American touring festival scene is certainly in order.

It began in 1991 when Perry Farrell changed the game. Inspired by England’s Reading Festival (as well as the shambolic tours of the Grateful Dead and the well-received Monsters of Rock packages that crisscrossed Europe and America in the late ’80s), Farrell launched the first Lollapalooza as his own band’s farewell tour. Looking back on that first edition in a 1999 column for Rolling Stone, critic David Fricke noted that Lollapalooza offered “a spirited deconstruction of the tired, old-school summer-tour aesthetic,” one that “[celebrated] the emerging motley strains of ’90s alt-rock culture with the inclusive vibe of Bill Graham’s old rock-blues-etc. bills at the Fillmore.” 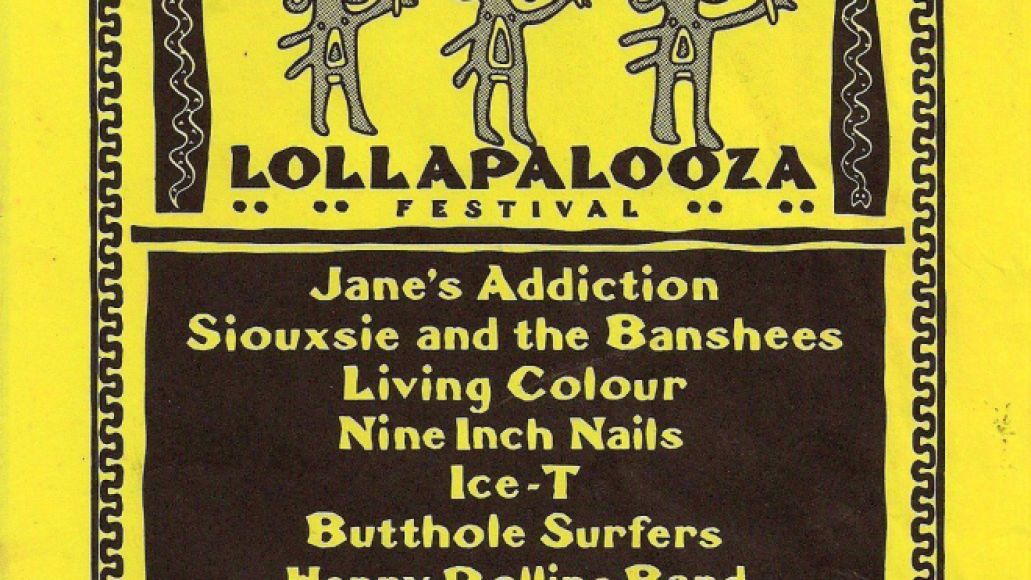 Though Jane’s Addiction kept their promise to break up (at least for a few years), Lollapalooza stuck around. With the addition of a fully booked side stage for the festival’s second edition in 1992, Farrell and company had unwittingly established the blueprint for what we now think of when we think of ’90s music festivals: a diverse mix of established headliners and up-and-coming bands, along with a bazaar’s worth of vendors and attractions, traveling around the country and bringing their subcultures with them.

That mobility was one of the festival’s greatest strengths and the biggest advantage of ’90s festivals as a whole: started in the pre-social-media age and not tied to a single destination, the traveling festival was free to bring a pre-packaged sampler version of music scenes from the world’s cities and cultural centers to communities in which such scenes didn’t exist. In Lollapalooza’s case, that meant taking urban rage and political unrest on tour, tapping into what critic Jon Parales described in 1996 as “the contradictory cliquishness of American culture: the determination to be an individualist without losing too many friends.”

However, that was just one of many possible festival visions. From its initial edition, Lollapalooza begat loads of copycats and competitors, each offering their own blueprint for a mobile subcultural community with music at its center. The earliest and (at least in terms of ticket sales and perceived threat to Lolla’s supremacy) most successful was H.O.R.D.E. Short for the incredibly clunky “Horizons of Rock Developing Everywhere,” H.O.R.D.E. emerged just one year after the original Lollapalooza, but unlike the politically tinged iconoclasm touted by its predecessor, H.O.R.D.E. was built on an updated version of Woodstock’s hippie togetherness for the post-Reagan generation. Founded by Blues Traveler’s John Popper, the festival caught some initial flak for its backward-looking feel-goodness; in his write-up of the 1992 New York stop, critic Peter Watrous sniffed that “if Martians had come on Sunday night and swept the Jones Beach amphitheater and its audience away to some other planet, prep schools would be in deep trouble” before describing the experience as “[filling] a need to hear musical exploration and the kind of authenticity in which performers actually play their instruments and punk and rap don’t exist.” The festival, as these things usually do, succeeded in spite of the naysayers. 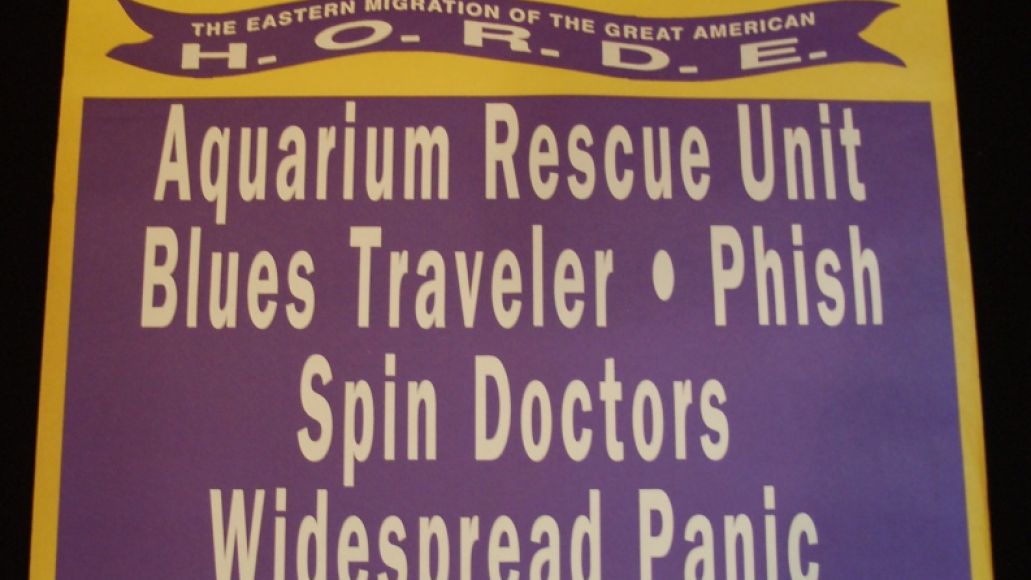 If you weren’t into new-era jam bands or Jane’s Addiction, though, that wasn’t an issue. By the late ’90s, there was a touring festival for nearly every possible subcultural configuration you could fit inside an amphitheater; a non-exhaustive list reveals options for fans of the blues (the House of Blues Barnburner Tour), proto-woke hip-hop (Smokin’ Grooves), celebrating women in rock (Lilith Fair), Grateful Dead bootlegs (Further Festival), the Celtic Tiger economic boom (Guinness Fleadh), Hot Topic (Warped Tour), or even the hard rock and metal reaction that Lollapalooza inspired (Ozzfest). Many of the most successful were run or curated by artists: in addition to Popper and Farrell, the Grateful Dead’s Bob Weir looked after Further while Sarah Mclachlan acted as the creative voice of Lilith Fair. Almost all offered a vision of community and escape that might be coming to a town near you.

If it felt unsustainable, that’s because it was. For Lollapalooza, the cracks in the facade began appearing as early as 1993. That year, as the festival found itself beset by competitors and bumping up against the diminishing returns associated with attempting to replicate the cathartic anger and exhilarating novelty of the first two festivals, Parales declared, “Lollapalooza is becoming a habit: spring break for the alienated” before concluding that “the people who put on the Woodstock festival were smart: They didn’t try an annual sequel.”

One of his articles that year was titled “Is Lollapalooza Losing Its Outsider Status?”, and unlike most headlines containing a question mark, this one violated Betterridge’s law by being answerable with a resounding “yes.” Despite frequently booking bands that (thanks to the post-grunge signing spree) made their homes on major labels, Lollapalooza was built more explicitly than most festivals on a rejection (or at least wariness) of the mainstream in general and the corporate world in specific. That ethos, stated or otherwise, made it even more difficult two years later when Lollapalooza 1995 (retroactively called “Alternative nation’s last stand” in an oral history from The Washington Post) — despite having “looked like an institution” while simultaneously booking a solid lineup that included Sonic Youth, Hole, Cypress Hill, and Pavement — failed to sell out most of its dates and was outdrawn by H.O.R.D.E. for the first time during the two festivals’ coexistence. 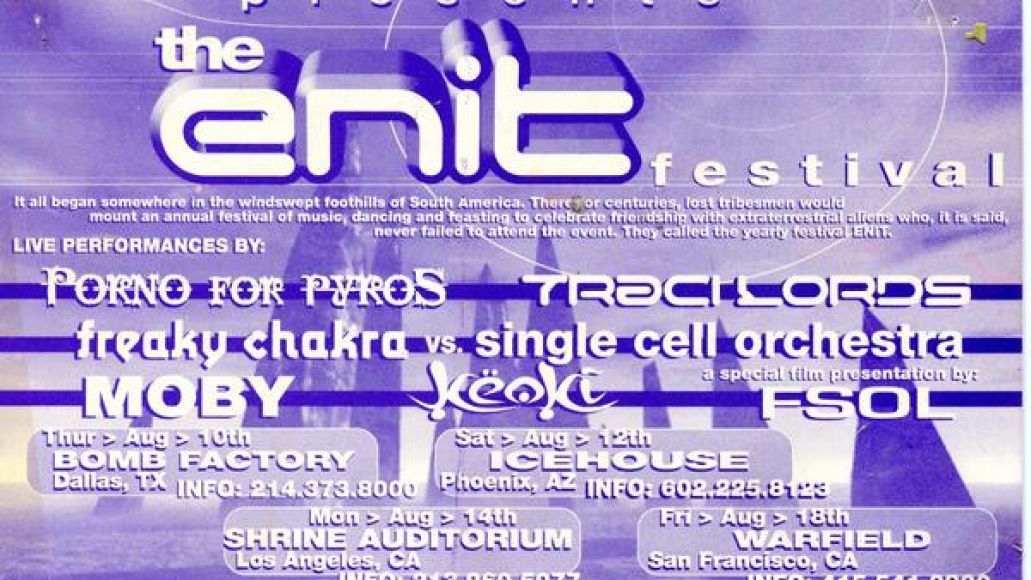 That relative failure hastened the sense that Lollapalooza needed to change. And it did. For the worse. The big switch started when festival founder Perry Farrell abandoned his own creation, skipping out on Lollapalooza to start the ENIT Festival, a conceptual tour described as “the Earth’s bar mitzvah” that had trouble finding booking dates because of Farrell’s insistence on concertgoers planting trees throughout the festival grounds. Lollapalooza, meanwhile, began running into the same problems that plagued the post-Altamont festivals of the early ’70s; Neil Strauss notes that, in advance of the 1996 edition, America’s preeminent festivals “had trouble finding sites to book because of concerns among some city councils, park officials, and police departments about traffic, noise, and other drawbacks of a hard-rock bill.”

The execs solved that problem by going even bigger. Despite decrying the prevailing strains of alternative music as “such shit,” Marc Geiger and his crew secured larger-than-usual venues for what Strauss called “a slightly punked-out version of Monsters of Rock, the heavy-metal package tour that flourished in the 80s.” In his own review of the ’96 festival, Parales went further, declaring that “this year, Lollapalooza’s arteries hardened” and noting that the choice of “stadium pros” Metallica as headliners indicated the festival’s newfound willingness to embrace money over principles (or left-of-center artistry).

Perhaps the biggest (and most intractable) problem stemmed from Lollapalooza’s own success; what earned its initial acclaim as a counter-cultural rejection of suburban squareness now found itself squarely in the mainstream. When your “outsider” subculture is large enough to get parodied by The Simpsons (as Lollapalooza was during the seventh season episode “Homerpalooza,” which aired on the eve of the ’96 festival), you’re probably sunk.

Lollapalooza returned in 1997, but the damage was done. That year, an anemic lineup led by headliners forgettable enough (Tricky? Orbital? James? Bueller?) to earn the fest the pejorative “Lousy-palooza” from Rolling Stone’s Blair R. Fisher marked Lollapalooza’s final ignominious appearance of the ’90s; just seven years after revitalizing the live music industry, the 1998 edition was scuppered after failing to secure a headliner. (Rumor had it they were turned down by everyone from Jane’s Addiction and Green Day to Marilyn Manson and Radiohead.) Co-organizer Ted Gardner said they’d be back the next summer (his exact words were “we shall be the Phoenix”), but Fisher was back with the same story in 1999, this time adding that “some insiders believe that’s a laugh-apalooza.” (One band manager was even harsher, claiming that “they didn’t cancel it, it never got resurrected […] so, it’s something of a misnomer to say it was canceled. The attempt to revive the patient was unsuccessful.”)

Lollapalooza, Warped Tour, and the Fall of the American Touring Festival