After a stellar but in many ways complete first season, the writers of The Handmaid’s Tale seemed to set two goals for the second: continue what worked while also dramatically expanding the show’s world. Unfortunately, it only met those goals in fits and starts. The show’s second season deepened the complex, interpersonal dynamics of its central characters — particularly those in the Waterford household. But it also spent a lot of time spinning its wheels and retreading old ground. And while the series succeeded in expanding its perspective outside of June, it also struggled to create coherent, dystopian world-building to complement its potent political metaphors.

Though not as narratively tidy as the first season (it’s clear the show’s writers were on shakier ground without Margaret Atwood’s novel to guide them), the second season of The Handmaid’s Tale did offer two strong overarching thematic through lines. The first explores the ways in which all women suffer under patriarchal societies — even those who (either knowingly or naively) support them. The second makes the experience of living under the horrors of a totalitarian regime relatable for a modern day Western/American audience.

Whether it’s a flashback in which Emily and her wife push their way through a crowded airport while trying to flee the country or a scene in which Fred and Serena are treated with outward respect but inner disdain while on a diplomatic trip to Canada, The Handmaid’s Tale takes familiar images and flips them on their head. The show makes the argument that oppressive, totalitarian regimes can happen anywhere, not just in “other” places where people are inherently “different.” It’s a timely, terrifying socio-political thesis as well as a much-needed reminder of the inherent humanity of refugees, political prisoners, and oppressed people everywhere. For all of its flaws, The Handmaid’s Tale knows what it wants to say. And its message resonates now more than ever. 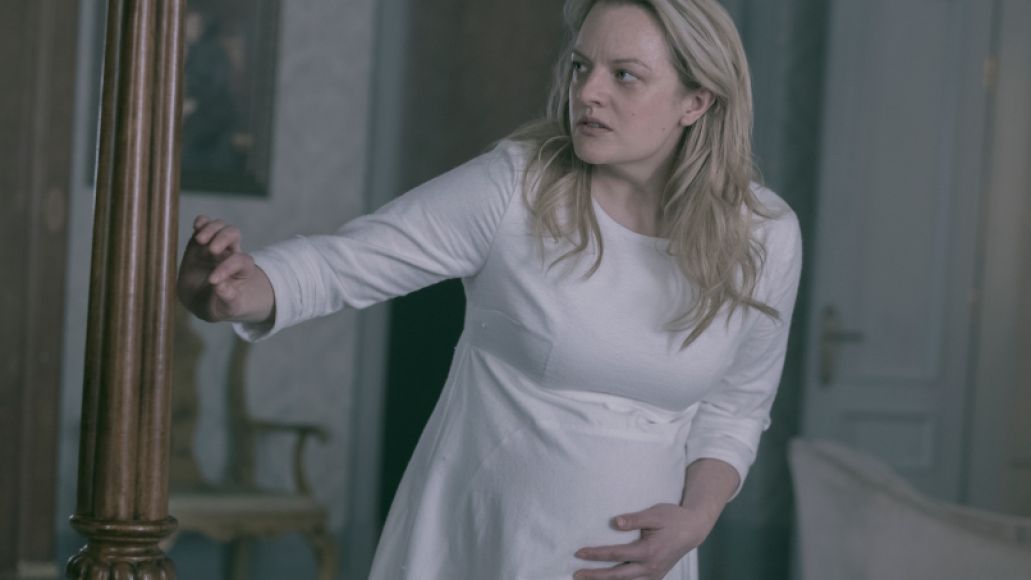 There are plenty of standout episodes in The Handmaid’s Tale’s second season: the deepening of Emily’s character in “Unwomen”, the mental battle between June and Offred in “Other Women”, the fun-house mirror perspective of “Smart Power”, and the Elisabeth Moss showcase of “Holly”. But the season’s strongest (and most difficult to watch) hour is its 10th episode, “The Last Ceremony”. The episode intentionally tears down the ceremonial artifice Gilead uses to justify its horrific actions: Whether it takes place in a religious ritual or as a spiteful punishment, the Commanders are rapists, and their Wives are accomplishes. And whether it’s through direct kidnapping or a faux surrogacy system, Gilead is stealing children from their parents.

The episode also features perhaps the standout sequence of the entire Handmaid’s Tale series: June’s brief reunion with Hannah. It’s simultaneously incredibly bleak and somehow deeply hopefully. June’s ability to parent in a crisis — to tell Hannah everything she needs to hear without ever putting her own emotions first — is a testament to an inner fortitude perhaps even she didn’t know she had. Gilead wants to force the Handmaids to bear children while denying their roles as mothers, but “The Last Ceremony” proves that Gilead can’t rob June of her maternal instincts — no matter how hard they try. Elisabeth Moss does career-best work with the heartwrenching, beautifully written material she’s given. Writer Yahlin Chang spoke with social workers, psychologists, and UN experts to understand how a parent and child might react when reunited after a traumatic separation. But she couldn’t have known just how timely her episode would feel when it aired. 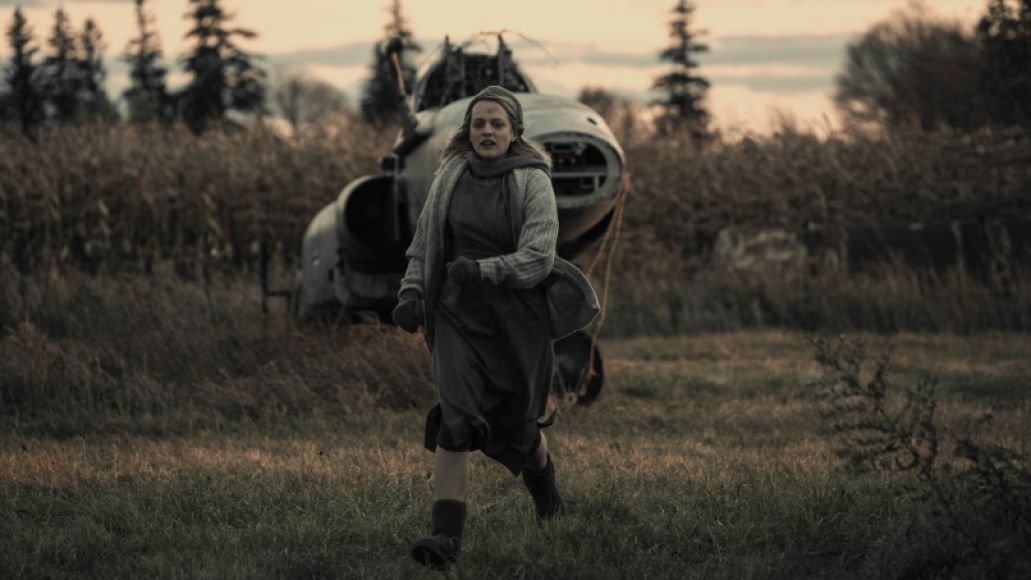 As I mentioned up top, the second season of The Handmaid’s Tale often felt like it was spinning its wheels without Atwood’s novel to guide it. Case in point: This season features not one but three big scenes (and a couple smaller ones as well) in which June is on the brink of escape only to somehow be pulled back into the show’s status quo. And in retrospect, her initial escape attempt feels the most frustrating and the most pointless. “Baggage” opens with June (literally) running in circles in the old Boston Glove headquarters. It’s too bad that’s a pattern the show decided to follow as well. 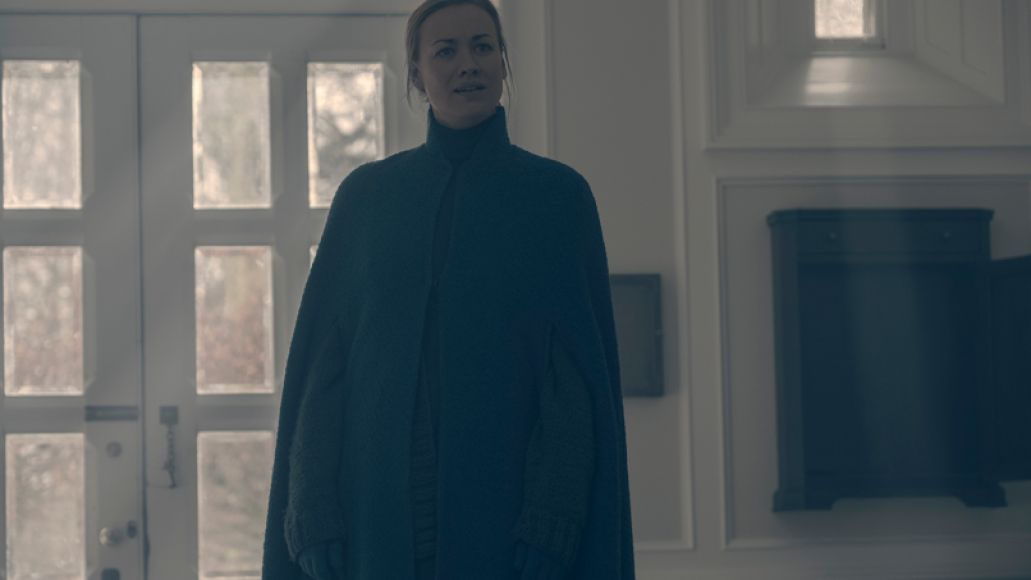 It goes without saying that Elisabeth Moss is the all-time MVP of The Handmaid’s Tale. As the show’s protagonist and central point-of-view character, she singlehandedly carries the series on her back, often doing so solely through silent facial expressions. But since we already spend so much time in her head and near her face, let’s spread the love a bit when it comes to celebrating the show’s stellar cast.

In picking a non-Moss MVP, there are so many to choose from (at least when it comes to the show’s female cast — the male performers have long been a weak link for the series). Alexis Bledel brilliantly conveys Emily’s seething but patient rage; Madeline Brewer perfectly embodies Janine’s dotty earnestness; Samira Wiley layers Moira’s trauma beneath a warm, approachable exterior; Amanda Brugel imbues Rita with a depth the writing doesn’t always grant her; and Sydney Sweeney makes poor, naïve Eden a pitiable, poignant figure. Plus there’s the always stellar Ann Dowd, whose Aunt Lydia is somehow both the most monstrous and the most emotionally complex character in the series.

But the performer to emerge as season two’s non-Moss MVP is Yvonne Strahovski as the villainous, victimized Serena Joy Waterford. In its second season, The Handmaid’s Tale makes Serena a more sympathetic character without ever downplaying her role in creating and maintaining Gilead. One of the biggest arcs of the season is about Serena coming to terms with the fact that she’s trapped in a prison of her own making — a prison she chooses to stay in even when she’s given a way out. And Strahovski is masterful at playing the many, many faces Serena adopts to navigate her ever-shrinking world. Serena may be mercurial, but Strahovski allows you to track every subtle shift in her thought process.

WHITFORD AND CHERRY AND OPRAH, OH MY! 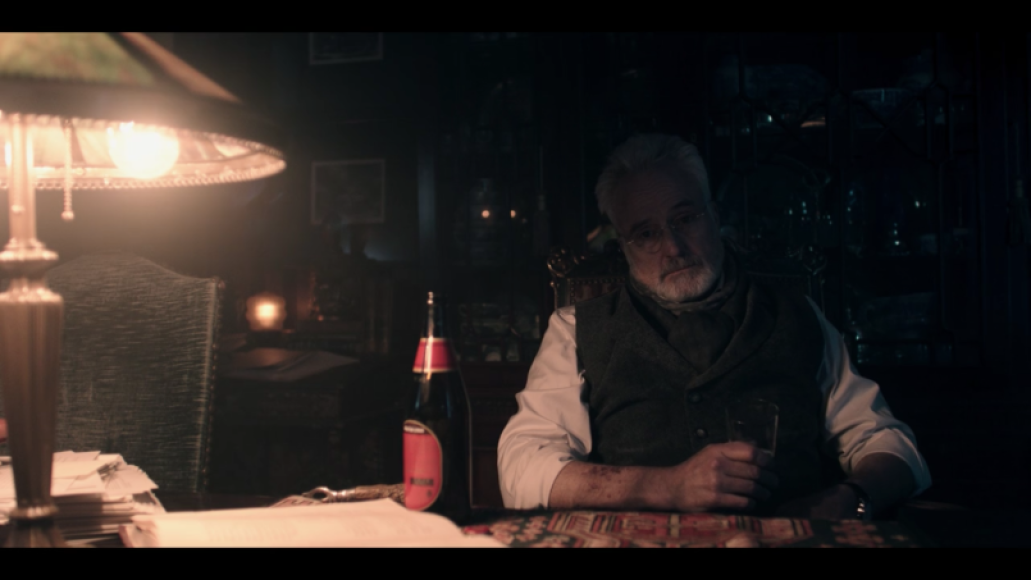 In addition to its always-stellar regular cast, this was the season of the high-profile Handmaid’s Tale guest star. From Cherry Jones as June’s radical feminist mom to Marisa Tomei as a Wife-turned-Unwoman to John Carroll Lynch as Emily’s doomed former co-worker to Oprah motherfuckin’ Winfrey as the voice of American resistance, big names added extra gravitas to small roles throughout the season. And that was especially true for the season’s standout bit player, Bradley Whitford. In a series bogged down by bland, underdeveloped male characters, Whitford turned in a funny, scary, delightfully off-kilter performance as Gilead economic architect Commander Joseph Lawrence. Despite only appearing in a handful of scenes in the final two episodes, Whitford made a big impression (and will hopefully keep doing so next season too!). And given that the most memorable images from The Handmaid’s Tale tend to be pretty horrific, bless Whitford for giving the show an iconic image not tied to violence: Commander Lawrence jamming out to Annie Lennox’s “Walking on Broken Glass”. 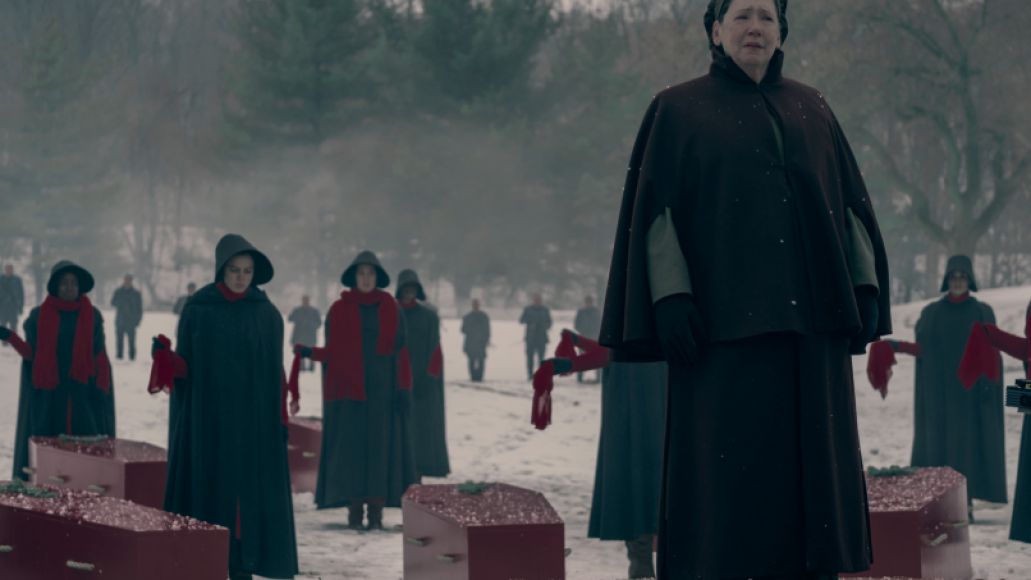 The Handmaid’s Tale is a hard show to watch but a beautiful one to look at. Whether it’s blood-red capes against a snow-covered field, a ghoulish reimagining of Fenway Park as an arena of torture, or the silhouette of a woman giving birth in front of a fireplace, the series uses its visuals to both emphasize the terror its characters are feeling and reclaim the humanity that’s so often stripped away from them. Along with cinematographer Colin Watkinson, directors Mike Barker, Kari Skogland, Jeremy Podeswa, and Daina Reid created a second season as visually lush as the first.

“BURNING DOWN THE HOUSE”

Music is perhaps The Handmaid’s Tale’s biggest strength and its biggest weakness. This show loves a needle drop — particularly an unexpected, incongruous one. While that can sometimes be successful (again, see that “Walking on Broken Glass” scene), it can also be a bit of a crutch for the series, especially when it wants to throw a dash of unearned empowerment into its bleak world. Janine’s “I Only Want to Be with You” lullaby? Great! A finale that pairs June’s determined look with “Burning Down the House”? You can do better Handmaid’s. 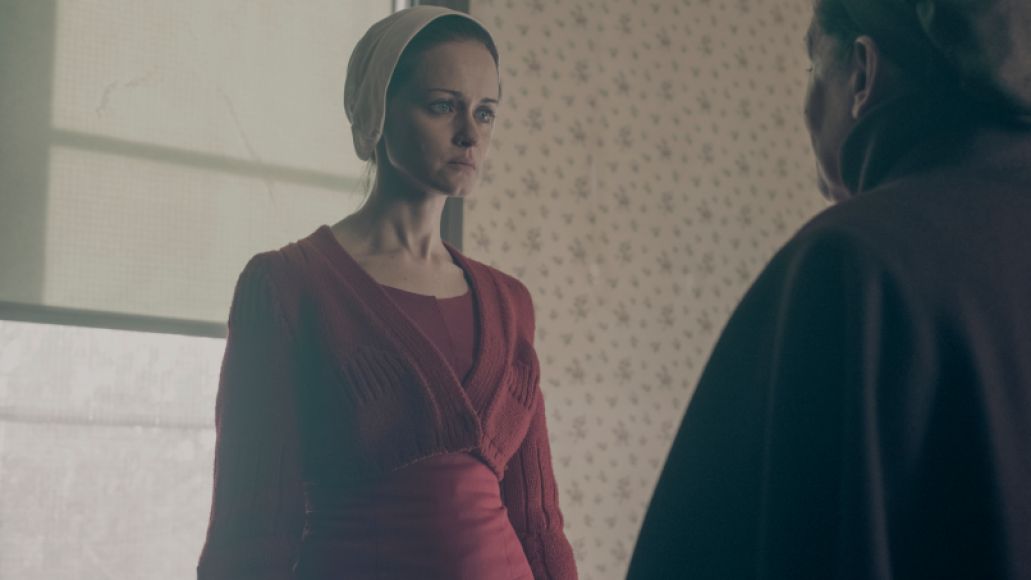 “The Word” is about the women of Gilead finally reaching their limit. Some — like Emily and June — have been in that mindset for a long time. But others — like Rita and Serena — have been more focused on keeping their heads down and playing by the rules. That is, until Eden’s cruel execution forces them to face the fact that Gilead isn’t actually safe for any women, even those who do play by the rules. So a Martha-led Underground Railroad, an unexpectedly magnanimous Commander, and an even more unexpectedly magnanimous Serena each play a role in trying to smuggle Emily, Nichole (née Holly), and June out of the country.

Like the season as a whole, “The Word” struggles with pacing issues and takes just a little too much glee from throwing its characters into traumatic situations. It’s an episode full of moments that are shocking (Aunt Lydia’s stabbing), moving (that June/Rita hug!) and frustrating (June’s decision to stay in Gilead and thereby once again keep the show’s status quo intact). But “Call her Nichole. Tell her I love her” is a hell of a final line for the season to end on. Coupled with a signature look of silent determination from Moss, “The Word” will no doubt suck viewers back into the show’s third season — if only to see what June has up her blood-red sleeve. 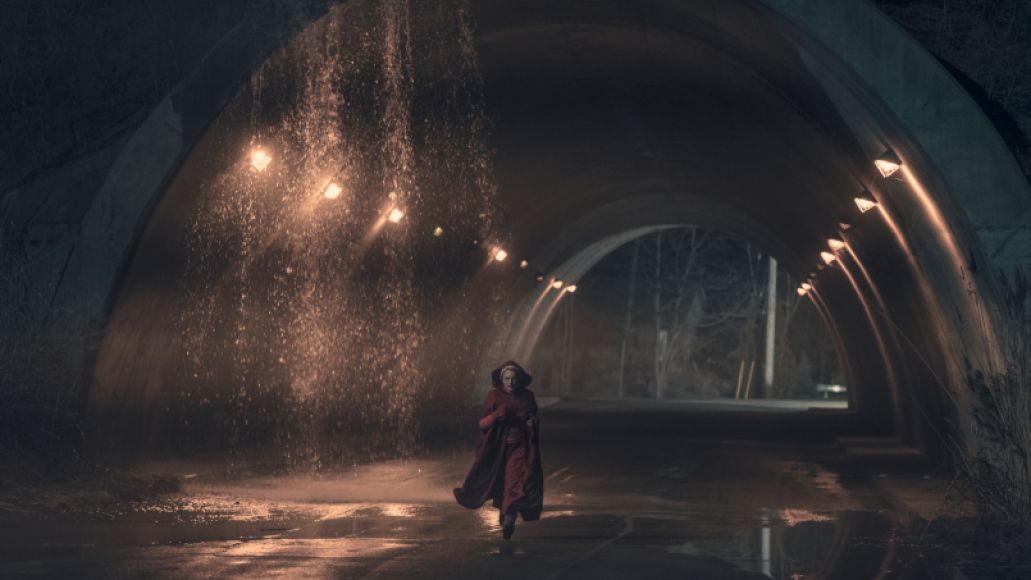 This feels very much like a transitional season for The Handmaid’s Tale. As it moves away from its guiding source material, the show is still figuring out how much it can expand its world without blowing up its core premise. And while that led to a frustrating “one step forward, two steps back” approach in terms of the overall narrative, the season also offered glimmers of the bigger, bolder, more confident show The Handmaid’s Tale will have to become if it really wants to run for 10 seasons.

TV Season Review: The Messages of The Handmaid's Tale Season Two Resonate Now More Than Ever