Azealia Banks’ recent stay at Elon Musk’s house has created quite a few headaches for the SpaceX founder. After getting snubbed by Musk’s then (?) girlfriend Grimes, a disgruntled Banks proceeded to share intimate details about the couple, including Musk’s alleged use of drugs. Banks also alleged Musk was on under the influence when was he tweeted out plans to take Tesla private and that he had funding “secured.” In actuality, according to Banks, Musk was “scrounging for investors… I saw him in the kitchen tucking his tail in between his legs scrounging for investors to cover his ass after that tweet. He was stressed and red in the face.” In the weeks since then, Musk was subpoenaed by the SEC. He also may have broken up with Grimes.

Now, Banks has shared a letter she wrote to Musk apologizing for “all of the painful events you’ve endured over the past week, as I feel as though my actions have largely exacerbated them.”

“Over the time spent liaising said collaborations [with Grimes], I was welcomed to a lot of personal information about you,” Banks wrote. “The stuff made me feel awkward and uncomfortable about being privy to you, yet I never had the intentions of ever using the information against you. What started off as a cat-fight lead to some seriously unexpected consequences and I seriously apologize.”

Banks also offered to meet with Musk in person “to properly and formally introduce myself to you.”

Interestingly, Banks intentionally omitted Grimes’ name from the letter, referring to her only as “”. 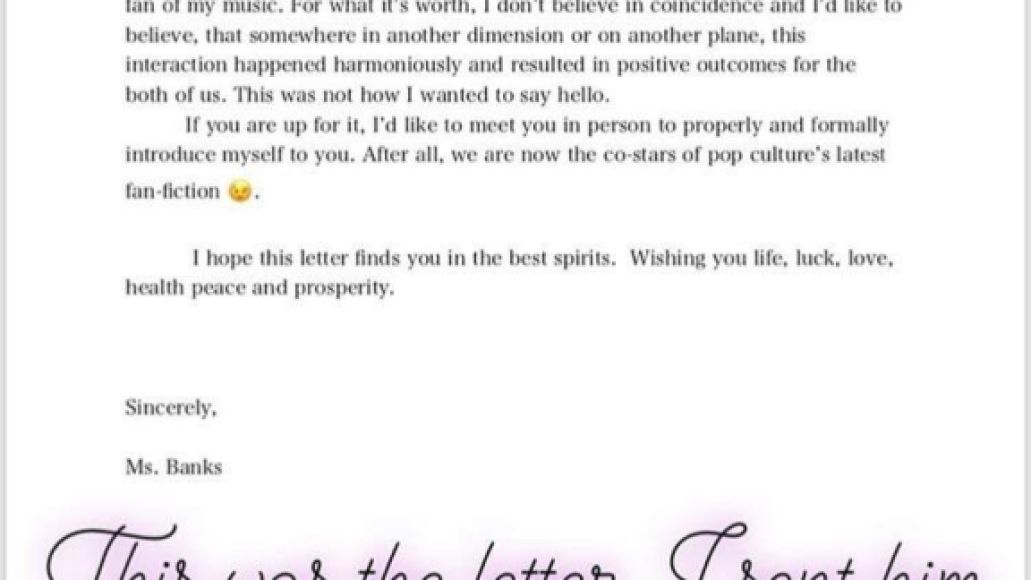 Meanwhile, Musk has tweeted a cryptic message many Grimes fans suspect is related to his ex.

Is this about Grimes?! from Grimes

Azealia Banks apologizes to Elon Musk: "I feel terrible about everything"