Breaking Bad posited that who a person is, what kind of choices they make, is situational. Walter White always had Heisenberg within him: the arrogance, anger, and self-satisfaction. But that side of him, and the evil he would inflict, couldn’t emerge until his circumstances changed. When fenced in by a middle-class life with domestic responsibilities, Walt was a meek science teacher who wouldn’t, and maybe couldn’t, hurt a fly. It took a cancer diagnosis and a series of increasingly wild events to turn him into the vicious kingpin he eventually became and yet somehow always was. Breaking Bad suggested that this type of change in circumstances could reveal the real you and that your true nature is just one big bang away.

And yet Better Call Saul, through its own protagonist, presents a very different idea of who a person is and who they might become and what can restrain or expose that. There is a sense that Jimmy McGill’s (Bob Odenkirk) true nature is irrepressible no matter his circumstances. Jimmy was born to con and manipulate and use his silver tongue to open doors, regardless of whether he’s a humble (if colorful) elder law attorney or the local TV huckster who becomes Walt’s conscience-free fixer in Breaking Bad. That part of him was always going to be there, rich or poor, success or failure, good or bad.

But Better Call Saul also posits that whether Jimmy McGill would become a good person or a bad one was not inevitable, and not situational, but was instead something personal — or rather interpersonal. Jimmy McGill has a superpower in the form of his almost preternatural ability to twist and fudge and bend the world to his needs. And it’s the people in his life — not just where or what he is — that keep him on the side of the angels, from slipping into the morality-free chicanery of Saul Goodman.

For a long time, the biggest person in Jimmy’s life who filled that role, who kept him on the straight and narrow, was his brother. Chuck McGill (Michael McKean) gave Jimmy two things he desperately needed in order to be his best self: something to aspire to and someone to care for.

When we first meet Jimmy McGill in Better Call Saul, it feels like his whole life up to that point was carefully designed to gain his brother’s approval. When Jimmy decides to go straight, to put “Slippin’ Jimmy” behind him, he doesn’t just try to live a better life on his own terms; he decides to try to live the sort of life that Chuck would be proud of. So Jimmy imitates his brother. He becomes a lawyer, because that’s what Chuck did, which means it’s respectable. Jimmy tries to join his brother’s firm, with the hopes that they can be joined in business and not just in blood.

We now know that this was a fool’s errand, that there was no greater insult to Chuck than the idea that his ne’er-do-well little brother would have the temerity to think he could be anything like Chuck. But Better Call Saul suggests that the light at the end of the tunnel for Jimmy, the thing that brought him out of being a conman and into a something a little nobler, was his quest for his brother’s approval.

But Jimmy also wanted his brother’s love, and that’s where the other half of what Chuck provided (or, more accurately, withheld) comes in. Part of what keeps Jimmy a decent human being, despite his natural inclination to do whatever it takes to come out ahead, is that he has someone else’s well-being to consider. Whatever the cause, Chuck was sick, and that meant Jimmy was needed. His brother’s illness required Jimmy to look outside of himself, to consider someone else’s needs and how his choices could either hurt someone he loves or be part of what helps them.

Having someone to care for, someone you love, someone whose health and well-being mean as much if not more than your own, grounds you; it makes it harder to inflict the same sort of ills on someone else. Better Call Saul presents a very specific view of human nature, one that’s distinct from its predecessor, where a person’s mix of good or evil is not innate or borne by circumstance, but rather a product of who’s around to pull you toward the light.

Or not. The slow burning tragedy of Better Call Saul is watching those better-making parts of Jimmy McGill’s life being gradually dismantled. First, Jimmy realizes that he will not only never gain his brother’s approval, but that the task was always an impossible one. The estrangement between the two siblings is founded on that betrayal, on Jimmy’s epiphany that all of his hard-fought struggles to become a success in his brother’s eyes were doomed from the start.

But then he loses his brother’s love, or at least his belief in it, and more importantly, the connection that made him care about someone else. That starts with a spiritual death of the connection between the two brothers, where Chuck delivers the coldest words in the series thus far — “you never really mattered to me.” That pronouncement severs the line between them and serves as a rejection of the bond that helped keep Jimmy from the darkness.

And if last season’s finale is to be believed, then a literal death may very well follow. When we last left him, Chuck seemed ready to make his grand exit and to take with him even the chance for reconciliation, the chance that Jimmy could somehow earn his brother’s esteem, let alone his love. Instead, Chuck’s last words to his little brother are to give up this charade, that Jimmy should stop trying to be better than he is, that the only way he could ever earn his brother’s respect is to be true to himself as the slimy, good-for-nothing wretch that Chuck always believed him to be. Before Chuck kicks the bucket, and kicks over the lantern that seems to seal his end, he tries to kick his brother off the ledge between here and Saul Goodman. 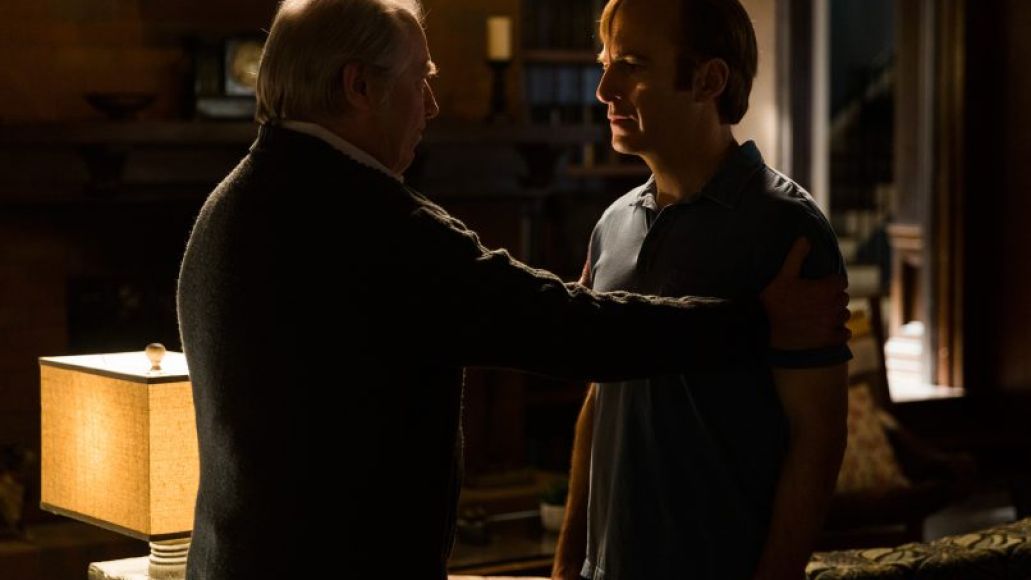 But there’s one last line of defense between Jimmy McGill and his far-less-scrupulous nom de guerre — Kim Wexler (Rhea Seehorn).

That’s not necessarily a great place to be, but now it’s Kim who gives Jimmy something to aspire to. Her ethos to hustle rather than buckle, her unwillingness to go along with his rule-bending ways, and her utter decency and determination help keep Jimmy from going off the deep end, because he wants to stay in her good graces. And she gives him someone to care about other than himself. When Kim has her accident, one Jimmy blames himself for, it pulls him back from the brink. Up until that point, Jimmy had let his own desperation, his own desire to scratch out a measure of success, lead him to make a kindly old lady into a weeping pariah just so he can get his payday.

And yet when Kim is hurt, he takes it all back; he feels the pull of that connection and not only gives everything up but tears himself down to make it right again.

Because he loves Kim. He cares about her more than he cares about himself, and like he once did with Chuck, he’s ready to set it all aside to make sure that she is healthy, well, and most of all not suffering because of him. Jimmy may be a conman at heart, but he still has a heart and people (or at least a person) to share it with.

Another story Better Call Saul has been telling over its first three seasons is one of Kim slowly but surely taking Chuck’s place as the major relationship in Jimmy’s life, a much healthier connection that gives Jimmy someone who inspires him to be a better man. But we also know that’s an unenviable position to be in, because we know how things end for Jimmy or at least where they go from here. 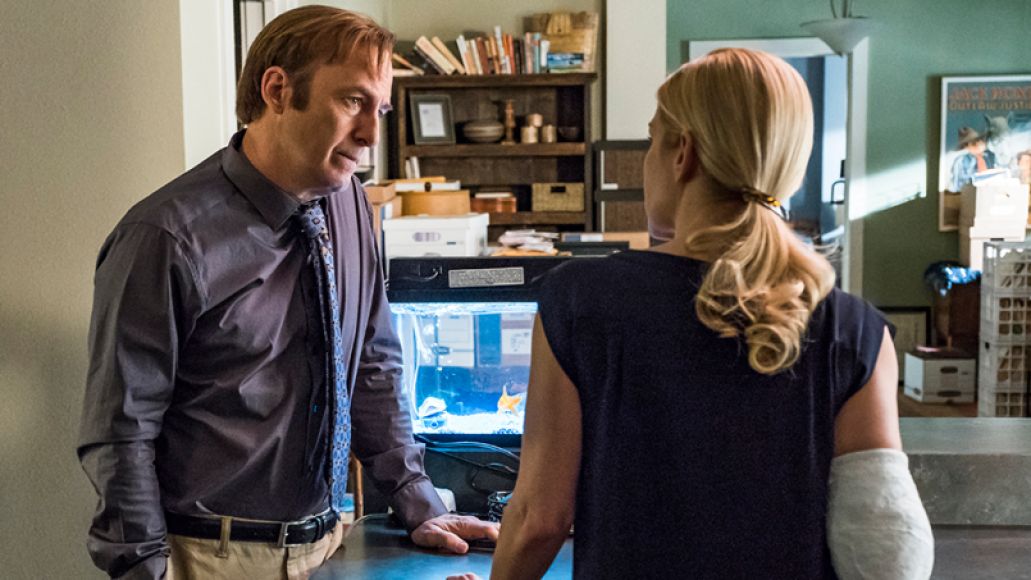 We know that he loses that battle, gives into his basest urges, and becomes the man who’ll swindle and defraud and abet vice and murder with hardly a thought. While there’s plenty we don’t know about Saul Goodman’s life during Breaking Bad, we know that Chuck’s not a part of it and that Kim doesn’t seem to be around either. We have every reason to suspect that Jimmy McGill will share the trajectory of his brother — one where he eventually alienates or pushes away all the people who truly care about him — until all that’s left is to fall headlong into the bad behaviors and personal pathologies that led him there in the first place.

At its core, Better Call Saul is an exploration of that idea, of what ties keep a talented but dangerous man from using his abilities in service of evil rather than good, while the show slowly but surely snips away at them. Kim Wexler is that last tie, the last thing holding Jimmy back from allowing his impulses to run wild in fraught moral abandon.

Now we’re left to watch as the line frays, to see Jimmy tug harder and harder on those threads and to wonder when they will snap. And we’re left to worry and fear and hope that whenever they do, whenever Jimmy hurts or repels or severs the last thing keeping him on the side of the angels, that Kim doesn’t share the same fate as Chuck, the last unfortunate soul who stood between Jimmy McGill and Saul Goodman.

Season 4 of Better Call Saul premieres on Mon. 8/6 on AMC.